Peter Svidler is on the brink of winning the 2015 World Cup after Sergey Karjakin spent 36 moves pressing for a win before committing two calamitous blunders in a row. When the dust had settled Karjakin had no choice but to resign and will now have to win the next two games to have any chance of raising the World Cup trophy in Baku. Svidler knows a single draw either tomorrow or on Sunday will make him a two-time World Cup winner. 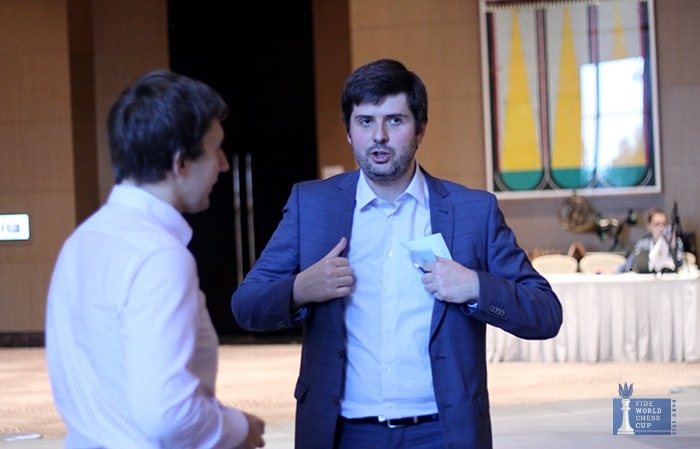 The players' discussion after the game skipped the moment of madness that left Peter Svidler on the verge of winning the 2015 World Cup | photo: official website

A few days ago Sergey Karjakin spotted a 3-fold repetition that suddenly turned a losing position against Pavel Eljanov into a ticket through to the World Cup final and the Candidates Tournament. Today, though, he was on the other side of the cosmic joke, as a game he seemed to be playing for only two results suddenly had a third:

It all turned on one move. 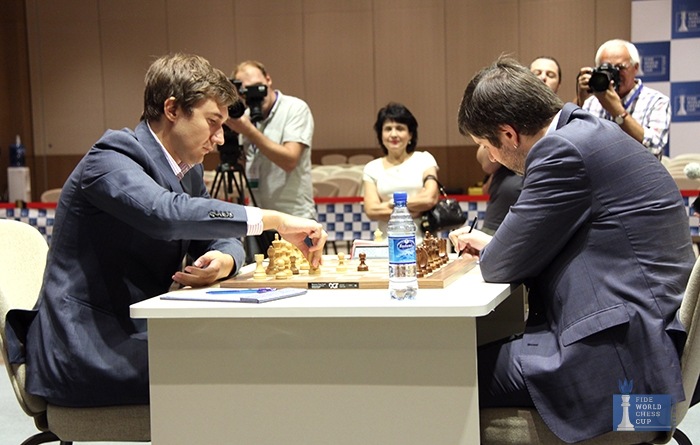 Little did they know the drama ahead... | photo: official website

Svidler, playing Black, was down to a few minutes for his remaining four moves, when the following position was reached:

Peter took up the story after the game:

He can make a draw here at any point. He’s never worse, even if he just takes on f7 and plays g3, but because of the match situation he wanted to continue… Here basically something inexplicable happened. I understand we’ve played a very long tournament and I’ve been saying that people are tired, but… I defended reasonably well and probably did not deserve to lose this game, but I definitely didn’t do anything to win it.

37.Rb5?? is just a horrible, horrible mistake, which Sergey would normally not make in a blitz game. I don’t know how to explain it. Once again, just make any move and offer a draw. After 37.Rb5?? I had about three minutes left and I was about to play 37…Nf6 and make the same kind of a draw, but then I suddenly realised I’m just winning! I almost missed it myself because you don’t really expect Black to be winning in this position. 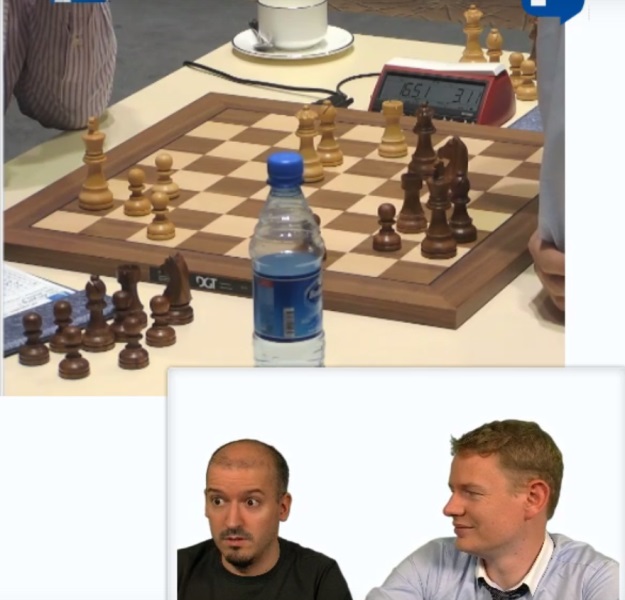 The face of IM David Martinez summed up 37.Rb5 as he commentated in Spanish with GM Jan Gustafsson

37…Kh8! Now I’m just a piece up. There’s no way for White to win the piece back. He could continue for some time longer – take on f7, play g3 and make me convert this – but I think it’s not a very difficult conversion. I will at some point exchange queens and then my pieces will start coming in. But he also played 38.Rd5?? after which I collect more material - 38…Nb6!

A terrible mistake by Sergey and I feel for him because you don’t really want to lose a game like this ever, especially in a World Cup final.

Sergey himself drew a moral from his momentary lapse of reason:

Before that the game had been a hugely tense struggle. 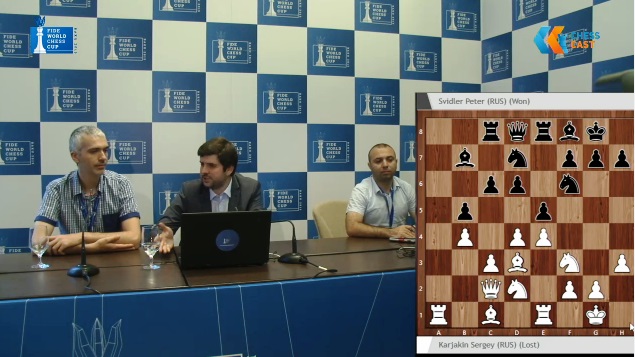 Svidler explained why in this position he played 17...c5, a novelty cooked up with a little help from his friends

Svidler struck first with the 17…c5 novelty in the Breyer Variation of the Ruy Lopez, later commenting:


Basically what I want to say is: “Skype is a wonderful invention and it’s also good to have friends”, because I can’t claim any credit for this idea – it’s not mine. Up to 17.b4 this is all theory, and 17…c5 is a very interesting new sharp idea which I think probably solves Black’s problems immediately, because normally Black just plays very slowly in these types of positions and Sergey is one of the best players in the world, I think, on the White side of the Breyer.

After that, though, Svidler felt he took a wrong turn and his pursuit of a forced draw began to resemble Captain Ahab’s pursuit of the white whale. You can watch Peter’s description of events at the end of the live broadcast below:

And last but not least, we have Jan Gustafsson’s account of how his chess24 colleague Peter Svidler moved to within touching distance of a remarkable chess achievement:

Svidler’s Eljanov-esque rating rise has taken him back up to world no. 15 on the live rating list… 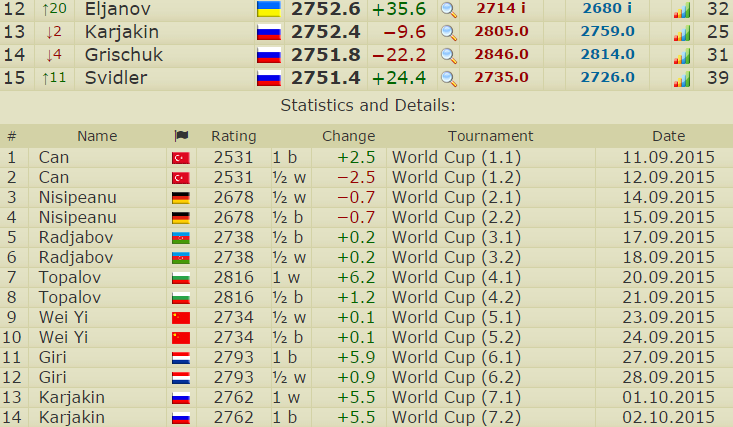 The question of who is the current Russian no. 2 is also a very open one! | source: 2700chess

…but much more importantly he now knows he needs to draw with White in tomorrow’s Game 3 to win the World Cup with a game to spare. Pro tip, though – don’t congratulate him already, as Lawrence Trent did by mistake, thinking the final was also played over two games:

If Karjakin does manage to win on demand with the black pieces tomorrow Game 4 on Sunday would still be incredibly tense. 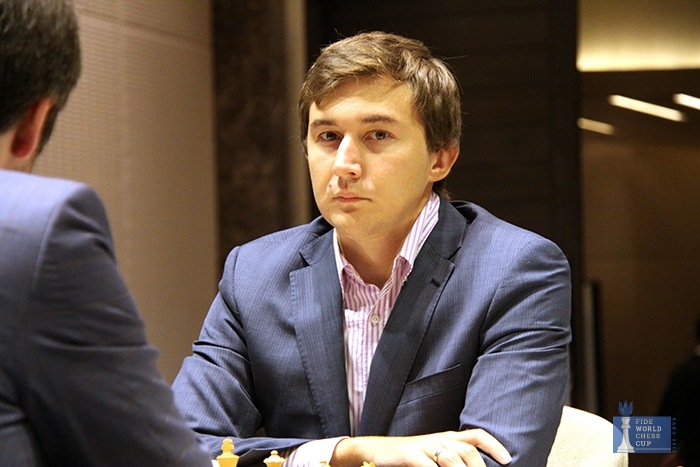 Having to win on demand is a quintessential World Cup situation - but needing to do it twice in a row is a new twist! | photo: official website 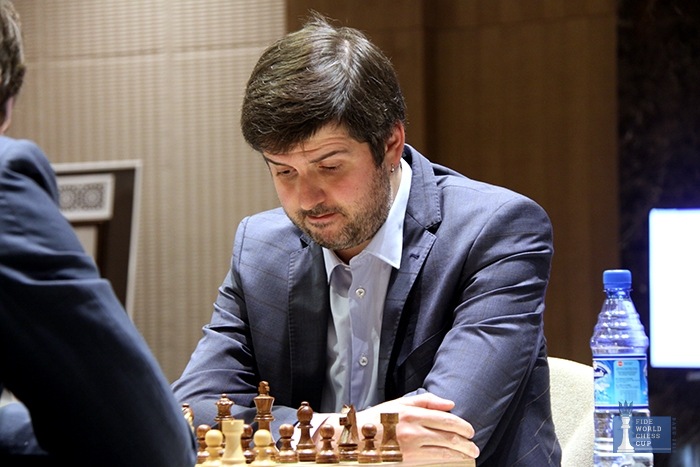 When it was suggested to Svidler that he was looking fresh he quipped, "It's probably the jacket..." before adding, "Trust me, I don't feel fresher. I half expect myself to drop dead at any point!" | photo: official website

Don’t miss what may be the very last game of the 2015 FIDE World Cup on Saturday, live here on chess24! You can also watch all the games in our mobile apps: