Sergey Karjakin has pulled off one of the great chess comebacks to level the World Cup final at 2:2 and force tiebreaks tomorrow. In today’s Game 4 Karjakin again needed to beat Peter Svidler on demand, though this time he had the white pieces. An opening advantage for Karjakin waxed and waned but never went away until Svidler finally cracked in a tricky position. The World Cup will now be decided on Monday, when it could all still end in Armageddon. 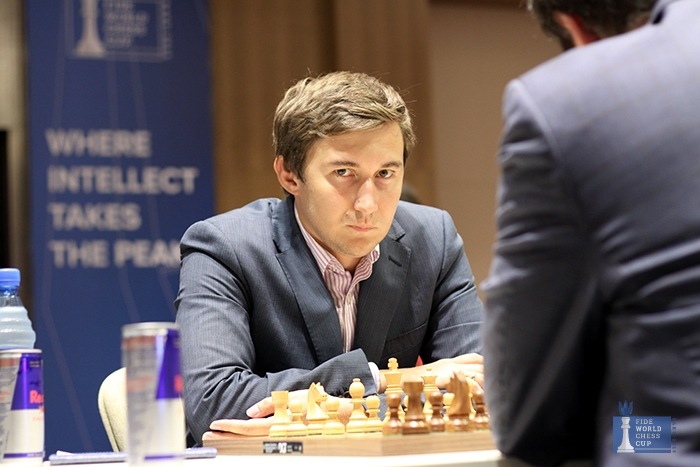 The last day has been a gut-wrenching ride for Peter Svidler. At 3:30pm on Saturday he must have played 28.Rxf2? thinking he was about to complete a stunning 3:0 victory in the World Cup final – finishing the tournament unbeaten, picking up a bunch of rating points, winning the trophy for an unprecedented second time and taking home a cool $120,000. 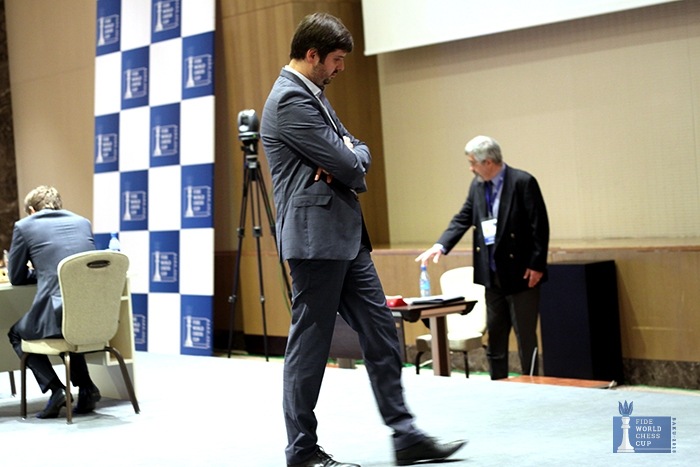 If the whole chess thing doesn't work out Svidler could surely have a second career as a race walker... | photo: official website

A couple of moves later he’d lost a shocking game, and then another 24 hours further on he faces the prospect of nerve-racking tiebreaks with the momentum firmly in his opponent’s favour:

So what went wrong for Peter in Game 4? Well, it seemed, at a glance, he might have committed some typical errors:

1) A risky choice of opening

When Peter needed a draw to beat Anish Giri in the semifinals he explained why an exchange of queens on move 10 wasn’t what he’d been hoping for:

My approach to today was I decided of course I will not play anything crazy in the opening, but I was planning to play a normal game. I wasn’t planning to try and exchange too many pieces… I will have to defend a slightly passive position… So it forced me to do something I’m not particularly good at doing.

In that case Svidler had a slightly better position with the white pieces and things worked out well in the end, but in the final when queens were exchanged on move 6 he found himself defending a tough position with Black. Watching grandmasters were concerned:

I don't like Peter's opening choice at all. Karjakin has already demonstrated nerves of steal to mount comebacks and fine technique

2) A gap in preparation 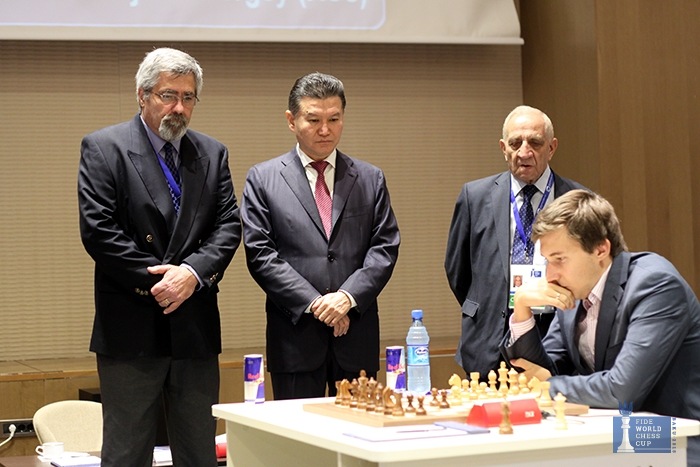 After his early 2...c5 surprise Svidler left Karjakin and some VIPs - who included FIDE President Kirsan Ilyumzhinov -  to puzzle over the move | photo: official website

At first things still seemed to be going according to Svidler’s script. Karjakin admitted to being surprised on move 2 and Peter didn’t stop to think until Karjakin had used up around 20 minutes on his clock and played 10.f3. That was the moment the 7-time Russian Champion knew he was in for a tough day, since he later told Karjakin it was the one move he hadn’t revised while preparing for the game. It took Svidler 15 minutes to play the questionable 10…h5 and two moves and 24 minutes later Karjakin felt that Svidler’s 12…g6?! was a bad mistake:

Maybe he went somewhere wrong and after 12.Bg5 I think he made a big blunder with 12…g6?!, and after 13.Nd6+! I’m much better. Then it was a really long game and I cannot show everything that happened, but basically I was much better and he was defending well.

3) Rushing in your opponent’s time trouble

For a long time Svidler manoeuvred well and appeared to be within a whisker of resolving all his problems, perhaps with some help from his opponent:

His clock position was also comfortably better than Karjakin’s, but in the run-up to the time control he took some very big decisions fast – most obviously on move 28:

Svidler had made great strides by playing as sharply as possible, but here he took only a minute and a half to play 28…g5. He followed up by putting all his kingside pawns on the dark squares (f6 and h4), but although that made them immune to White’s light-squared bishop it would later turn out the fortress couldn’t hold. The radical 28…f5!? deserved very serious consideration. 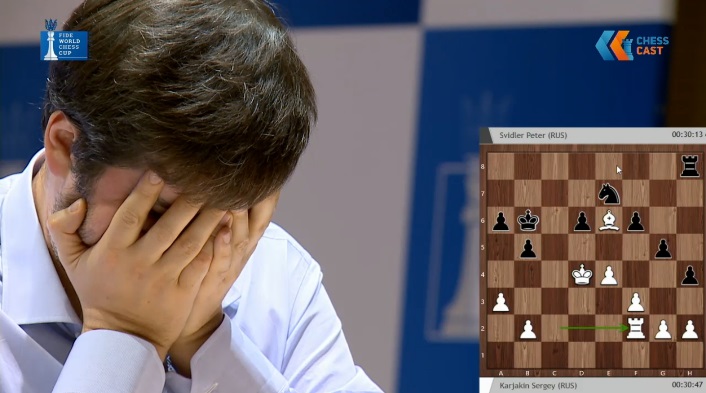 Perhaps it’s just accumulated exhaustion and frustration at the recent turn of events, but it seemed as though Peter had accepted his fate before it was strictly necessary. As late as move 44 Black still had a good fighting chance of a draw:

In the game Karjakin maintained his composure and went on to win with little difficulty, completing an incredible comeback:

He was asked afterwards if he had a recipe for such comebacks:

As far as I recall that was my fourth win on demand in this World Cup. That’s of course very tough, but there are no recipes here except not to think about the tournament situation and play chess. Today I didn’t go for any very sharp variations – he offered me a slightly better endgame and I went for it. You need to play the position and play chess and the result will either come or it won’t, but you need to do everything that depends on you.

Jan Gustafsson once more provides full analysis of a game that was the 427th of this incredible tournament:

So what now? Well, tiebreaks, of course, and as in every round we have the potential for another seven games: 2 x 25-minute rapid, 2 x 10-minute blitz, 2 x 5-minute blitz and, finally, Armageddon. Whatever happens the 2015 World Cup must end tomorrow! 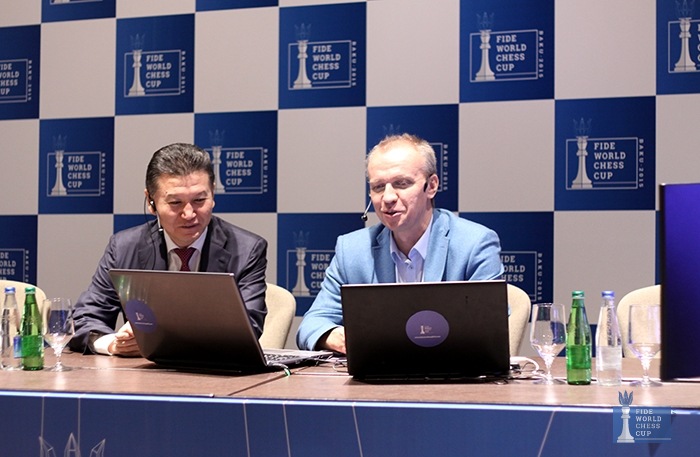 Russian commentator Sergey Shipov said the tournament was going on so long he had the impression he'll celebrate the New Year in Baku! Kirsan Ilyumzhinov, meanwhile, was also looking to the future - he told Chess-News the next World Championship match will definitely be held in the USA in October 2016, in either New York, Chicago or Los Angeles. He put the chances of the Candidates Tournament also being held in the US at 50% | photo: official website

Sergey Karjakin summed up the preparation he was aiming for as “to get a good night’s sleep!” Peter Svidler will have to conquer the demons unleashed by the last couple of games and refocus. So far he’s needed tiebreaks three times and of course come through successfully. Karjakin, meanwhile, has come through that ordeal on no less than four occasions in Baku.

It’s been such a gruelling event, though, that perhaps Pavel Eljanov put it best:

“The main thing is not to lose any people” V.V. Smyslov. That’s all you need to know about the final of the World Cup. #bakuworldcup2015

Needless to say… don’t miss tomorrow’s tiebreaks when we’ll discover the identity of the 2015 World Cup Champion! You can follow all the action live here on chess24 and also watch all the games in our mobile apps: