The fat lady was about to burst into song when Peter Svidler returned Sergey Karjakin’s gift from the day before and blundered twice in a row to turn a won position into a lost one. That sudden reversal still leaves Svidler needing only a draw to win the 2015 World Cup, but Karjakin’s task of winning on demand with the white pieces tomorrow and prevailing in tiebreaks suddenly looks far more doable. Once again we have analysis by both the winner and chess24’s Jan Gustafsson. 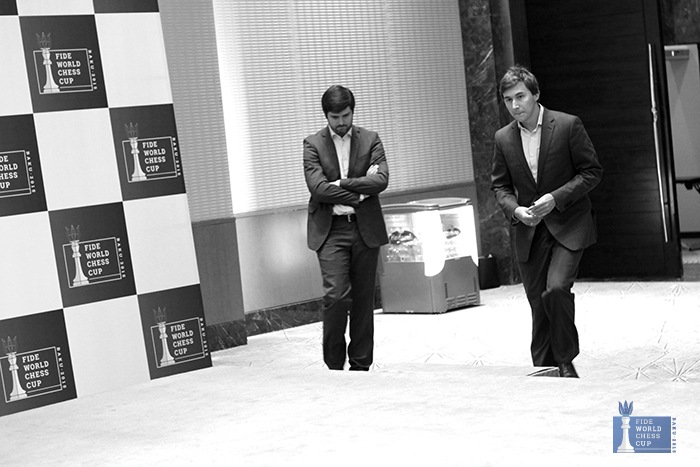 Svidler and Karjakin are the last men standing at the 2015 FIDE World Cup, but only just... | photo: official website

In Game 3 of the Baku World Cup Sergey Karjakin needed to win with the black pieces or the match would have finished today. 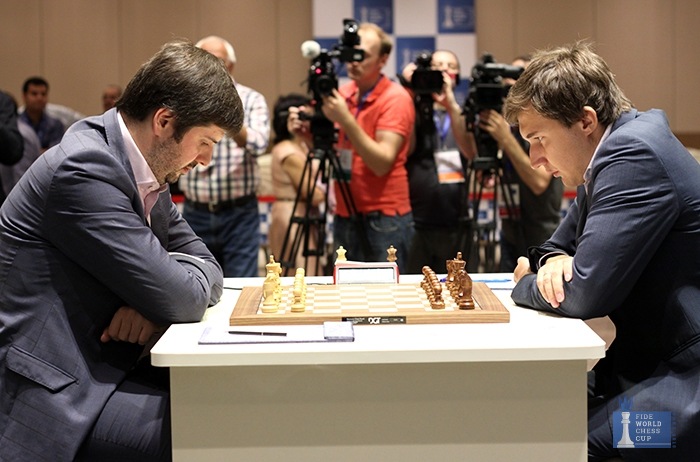 Chess doesn't get much more intense than this | photo: official website

He opted for the Sicilian and a tense and well-played struggle brought the players to the position after Peter Svidler’s 22.Qc5:

Here Karjakin explained to Sergey Shipov in Russian that when he went for 22…Rf6!? he’d decided to “go all-in”. In the English press conference he elaborated:

It was a completely crazy game. I had to try and win and I went to the most complicated position I could have done and at some moment after he played 22.Qc5 this probably should be equal and I should play something like 22…dxc4 and after some exchanges it will be a draw, but I was trying to create something and I went with this 23…Ne5 and 24…Nd3. I think White is better here, but the position has complicated.

Objectively Svidler was winning from move 25 onwards, but it was far from trivial, as the critical position after 27…exd5 shows:

After the game Sergey suggested first 28.Nxd5?! here (the computer thinks Black would then be better after 28…Nxh3!) and then commented that 28.Qd2 was probably the best move – he didn’t mention the computer’s winning 28.Qc3! in either press conference. Karjakin was right that 28.Qd2 was strong, though, and as he explained, “Maybe Black has chances to make a draw, but of course not more”.

Instead Peter was led astray by his aesthetic sense (“any virtue can be fatal”, as the Australian poet Les Murray once put it), with Karjakin noting of 28.Rxf2?, “He just thought he was winning beautifully here”. 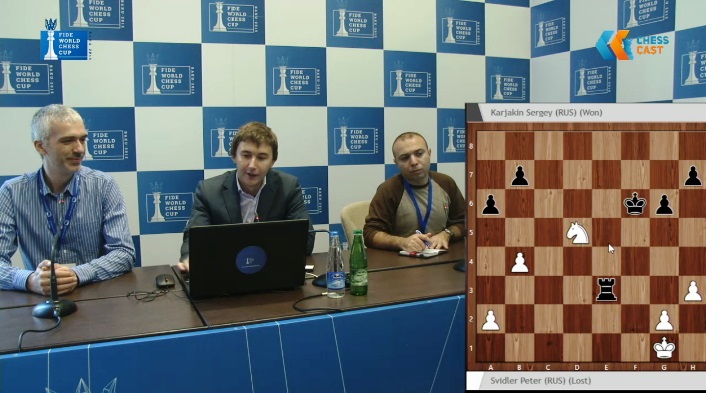 Alas for Svidler, 28…Qh4! was a very cold shower. Peter was low on time and became visibly nervous at this point, but could still have bailed out with 29.Qxe8! Karjakin wins a pawn, but that wouldn't be the end of the world: “It should be a draw, but Black has winning chances already.”

Instead Peter repeated the mistake Karjakin had made the day before and took only one and a half minutes to play the losing 29.Qd2?? That was hit by 29…Rxf2, though from the speed that Svidler whipped out 30.Qc3+ and left the board it seems he still hadn’t realised what he’d done.

Only when he was walking back to the board and saw 30…d4 on the monitor did it hit him that he’d thrown away the game and a great chance to win the 2015 World Cup with a game to spare. 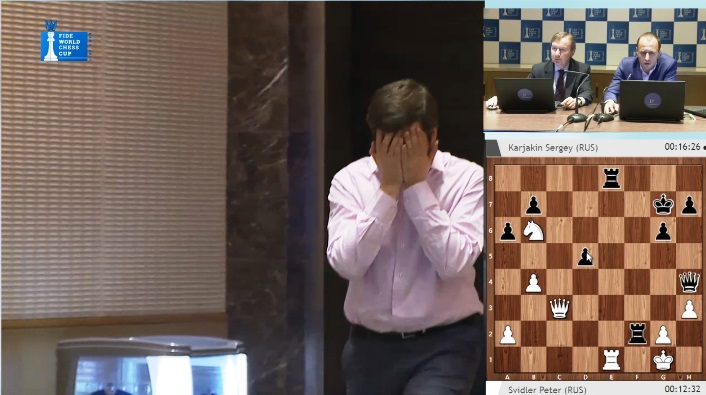 Seldom has the physical impact of a chess move been more visible than when Svidler saw 30...d4!

He came to the board, sat down, buried his head in his hands and then immediately offered his hand in resignation. There was the briefest of exchanges and some apologetic body language from Karjakin before Svidler left the scene of his crime. 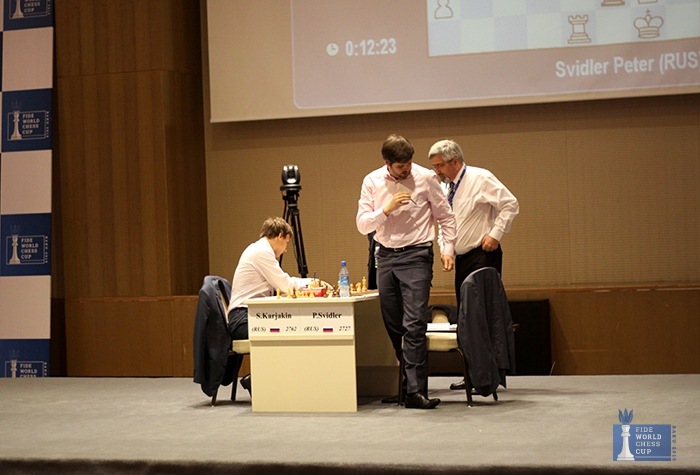 Svidler after resigning, with over 12 minutes still remaining on his clock | photo: official website

Karjakin gave the one obvious explanation for what had happened:

I think we are both under big pressure and also we are very tired because it has been a very difficult tournament already.

Image caption: "The temptation to give up (resign) will be particularly strong shortly before victory" - Chinese wisdom" Karjakin: "The Chinese wise men were right

You can watch the final stages of today’s game and Karjakin’s post-game press conference in the video below:

Peter now faces the same struggle as Sergey the day before and must compose himself after a shocking loss. In fact, in the Russian post-game interview Karjakin explained the mystery of what on earth he was hoping for when he played the losing 37.Rb5?? in Game 2:

I just couldn’t see a way to strengthen the position and I thought 37.Rb5?? was interesting. There was a trap there, because I saw the move 37…Bc5? runs into 38.Rxc5 Nxc5 39.Qd8+, and I thought I’d set a clever trap, but in fact I was just losing in a single move.

For a full account of today’s game, including the intriguing opening battle, check out GM Jan Gustafsson’s video:

So where does that leave us? Well, despite today’s crushing blow for the 7-time Russian Champion, Svidler is still in the driving seat in the match and knows a draw tomorrow in the fourth and final classical game will give him the World Cup title. Even if he loses he’ll still have a chance to fight back in tiebreaks on Monday. Whatever happens, the 2015 World Cup will have gone down to the wire! 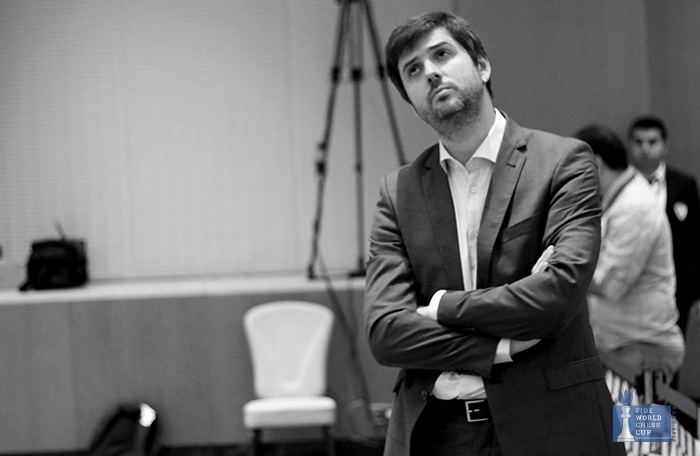 Peter Svidler now has to try and ensure his first loss at the 2015 World Cup is also his last! | photo: official website

Don’t miss the last classical game of the 2015 FIDE World Cup on Sunday, live here on chess24! You can also watch all the games in our mobile apps: