Peter Svidler seemed to see everything as he started the 2015 World Cup final in Baku with a smooth demolition of Sergey Karjakin. The 29-move win for White could have been even quicker, after Karjakin failed to readjust when a quiet position suddenly exploded. We have video analysis by Jan Gustafsson and the man himself, Peter Svidler, while we also look at the players’ contrasting paths to the final.

The path to the final

Peter Svidler has repeated the winning start that saw him beat Alexander Grischuk to win the 2011 World Cup, instantly transforming himself into the favourite to win the 4-game match, though he would later point out:

I wanted to say it’s a long match… it’s not a very long match, but it’s longer than we’re used to here. Everything is still in flux!

We say “transforming”, since before today’s game it was hard to pick the most likely winner. On the one hand, Karjakin is rated 35 points above Svidler on the most recently published FIDE rating list (not yet taking account of the World Cup) and their head-to-head classical record before today’s game read: 5 wins for Karjakin, 20 draws and only 2 wins for Svidler. Karjakin also won their most recent encounter in the 2015 Russian Championship.

The 2015 FIDE World Cup finalists together on the day they won their quarterfinal matches | photo: Macauley Peterson

On the other hand, Peter has been training by playing Banter Blitz has clearly been in the better form in Baku, making it to the final without losing a single game despite playing both Topalov and Giri, while Sergey had lost two games and survived by the skin of his teeth despite a nominally easier path to the final. A chess24 user provided us with the following to illustrate the fortunes of the top players:

Here's something for the final that summarizes the results for the Top 25 'live rated' players using ratings from 2700chess.com retrieved after the semi-final round.

The author provided a quick bio: "This table is the creation of chess24 user oldfool, from a small town in Texas near Houston. While he claims to be a serious patzer, he has developed an appreciation for high-level chess by following tournaments at chess24 and other sites, but chess24 is his favourite venue"

The highlighting reveals the story, accentuating the often exciting upsets during the tournament, particularly for Peter Svidler. Svidler's climb through the brackets after Round 2 was against higher-rated players. Coming into the World Cup, like Eljanov (originally rated #32), Svidler was originally rated #26, thus neither were even on the Top 25 list for the opening round. Whether Eljanov or Svidler had the more difficult climb is debatable, but Svidler made the final.

Karjakin's path only includes his two wins in Rounds 5 and 6. His opponents, Eljanov and Mamedyarov, had previously knocked out top seeds Nakamura and Caruana, respectively. Karjakin's other opponents were not in this Top 25 list. Ironically, Andreikin, beaten by Karjakin in Round 4, climbed to #26 in the live ratings during the World Cup.

Other advantages in Peter Svidler’s favour included his experience of the 2011 World Cup final and the fact that he was able to enjoy an extra rest day on Wednesday. On the morning he visited the Sevimli Bala Chess and Arts Club in Baku: 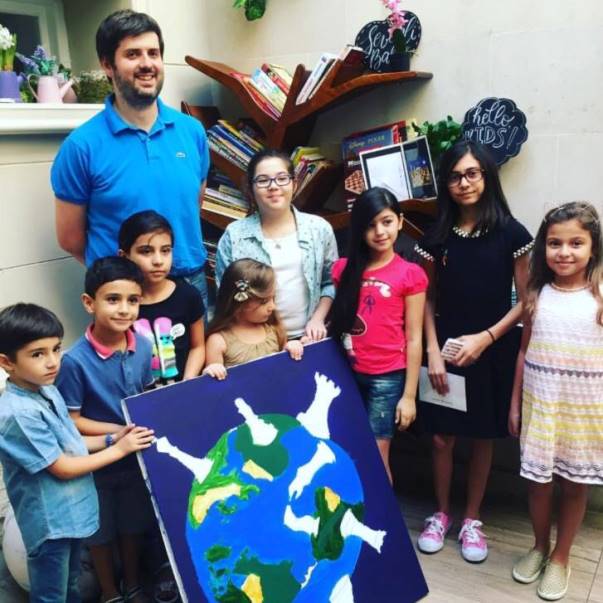 The World Cup finalist with the world - and some enthusiastic kids - at his feet | photo: Extra Time

Svidler was far from alone in visiting that club during the World Cup: 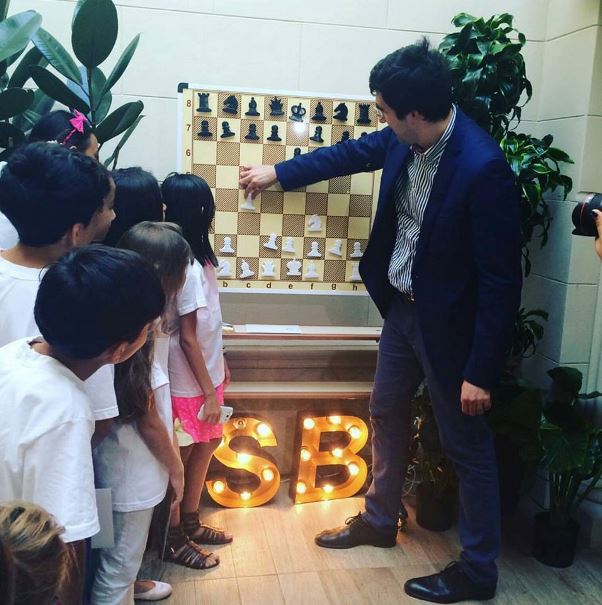 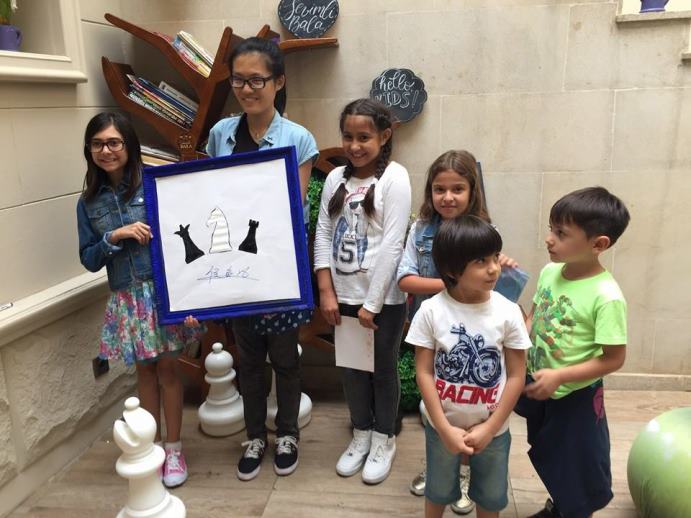 And the former Women's World Champion Hou Yifan - who will aim to regain her title in March next year - also made an appearance | photo: Extra Time

Then the 7-time Russian Champion could do a little commentating on the nerve-wracking tiebreaks between Eljanov and Karjakin in the afternoon.

So going into the final it was hard to pick which of the Russian stars was the most likely to succeed… after all, Peter is rated even higher than some local waiters! 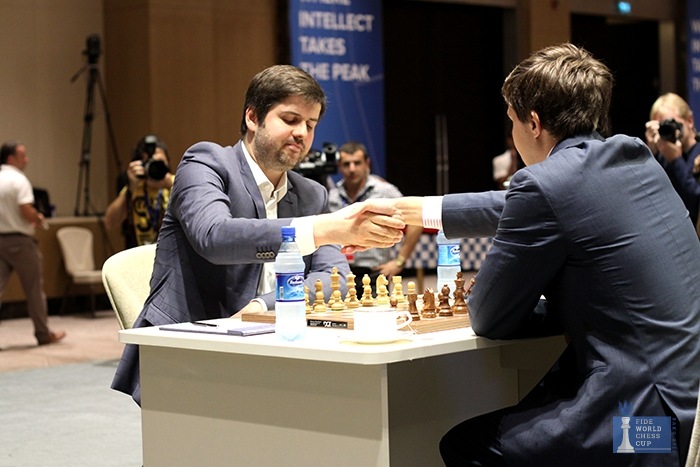 Despite all that build-up, there must have been a sneaking suspicion in the minds of chess fans that what we’d see in the final would be a number of relatively quick draws. That prospect didn’t seem to have lessened when Karjakin made the first surprise move in a King’s Indian Attack by playing 9…Nxd5:

Generally Sergey takes with the pawn in this position, not with the knight. He’s played a number of games after 9…exd5. I think Black is fine but it’s a whole different kettle of fish. He took with the knight today. I’ve always wondered why he doesn’t do that because it’s a perfectly healthy option and from a positional point of viewpoint it’s possibly preferable to taking with the pawn.

Just 17 moves later it had all gone utterly wrong for Karjakin after 26.Qc4! – a move he told Peter he’d forgotten about.

But then again, the three more moves Sergey made in this position extended the move count but did absolutely nothing to improve his day. 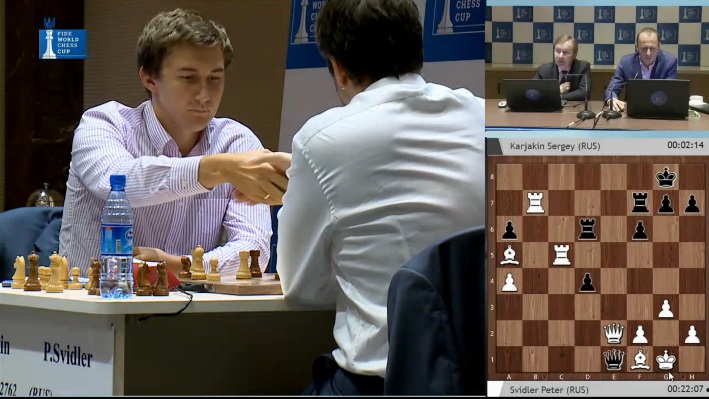 How did we get from the first diagram to the last? For that we have two chess24 experts to help us - first Jan Gustafsson:

And then, of course, Peter Svidler:

In 2011 Alexander Grischuk didn’t manage to mount a comeback after losing the first game of the final to Svidler, bowing out with three draws. Can Sergey Karjakin do better? There's not long to go until we find out.

Don’t miss the second FIDE World Cup final game live tomorrow right here on chess24! You can also watch all the games in our mobile apps: