It’s all about statistics at this stage of the FIDE World Cup! After Day 2, 40 players have qualified for Round 2, 40 are out and the remaining 48 will fight for survival in 24 rapid tiebreaks on Sunday. Romance seemed dead on Saturday, with Mariya Muzychuk finally falling to Mickey Adams and Arthur Ssegwanyi admitting defeat against Giri. There were four comeback wins, though, including a brilliant attack by Moiseenko against Lu Shanglei (analysed by our very own Jan Gustafsson) and a miraculous 119-move escape for Leinier Dominguez. 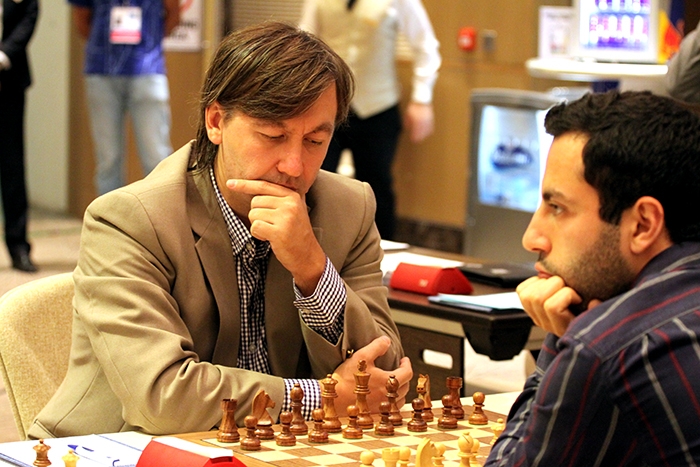 Gata Kamsky is perhaps the highest profile player already out of the 2015 World Cup, after losing 1.5:0.5 to Hrant Melkumyan | photo: official website

You can replay all the Round 1 games so far using the selector below:

As we said, it’s all about the stats, as the huge 128-player World Cup field must be halved before Monday’s Round 2. So let’s take an overview of the results: 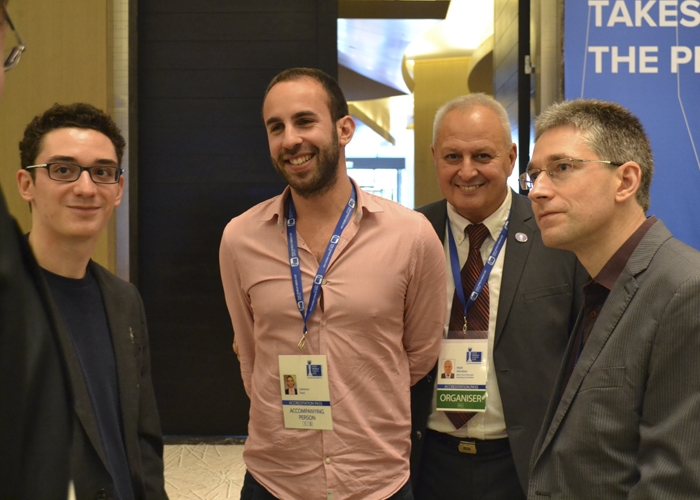 Fabiano Caruana, his manager Lawrence Trent and Mickey Adams - the day would end well for all of them, if not for Lawrence's team Chelsea... | photo: official website

The big guns of world chess flexed their muscles in Round 1, with Topalov, Nakamura, Caruana, Aronian, Kramnik, So, Karjakin, Yu Yangyi and Eljanov scoring some devastating wins. Special mention, however, must go to Egypt’s Amin and India’s Sethuraman, who shut out the higher-rated Saric and Sjugirov. 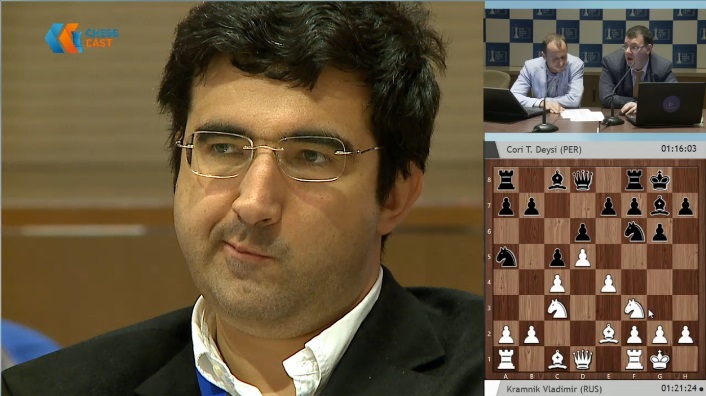 Deysi Cori played bold chess against former World Champion Vladimir Kramnik, but it was only going to end one way...

29 players took the professional knockout approach to proceed to the next round by a minimal margin, including the likes of Svidler, Mamedyarov, Vachier-Lagrave, Ivanchuk, Wei Yi and Artemiev. In some cases it almost seemed to be a transaction that suited both players. The first player to make it into Round 2 was Ding Liren, whose Canadian opponent Tomas Krnan settled for an 18-move draw by repetition in a “must-win” game. 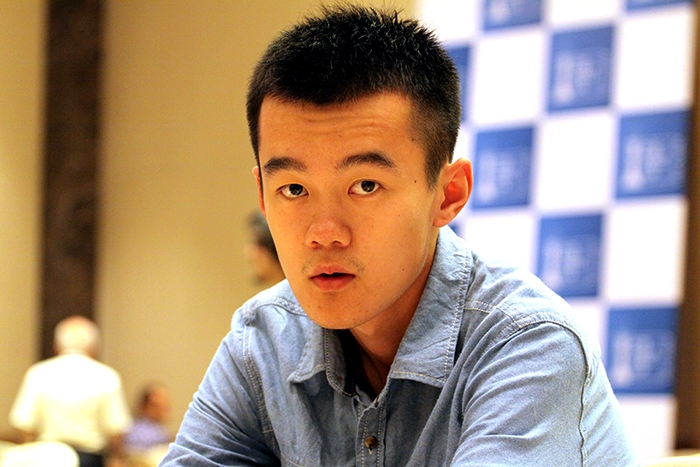 The 2436-rated IM got to draw with a Top 10 player. Ding Liren lost 3.8 rating points, but is through to the next round with the luxury of a day and a half to rest. Everybody’s happy?

Two of the stars of Day 1 finally succumbed. After their opening 158-move draw Anish Giri once again built up a crushing position against Uganda’s Arthur Ssegwanyi, but this time he converted the full point with (relatively) little trouble. Or, as he tweeted:

Mariya Muzychuk had comfortably held Mickey Adams with Black, but in the second game the English grandmaster began to weave his famous webs. Opposite-coloured bishops can be drawish, but with rooks and passed pawns in play it can also get very tricky!

Here 44.Bc1!! would force Adams to put in some work to prove he wasn’t worse. Instead after 44.Rf4? Bc4+! Black was winning, and Adams reminded us how he’d got to the final of one of these huge knockouts when it was a World Championship – before losing to Rustam Kasimdzhanov in Tripoli in 2004. 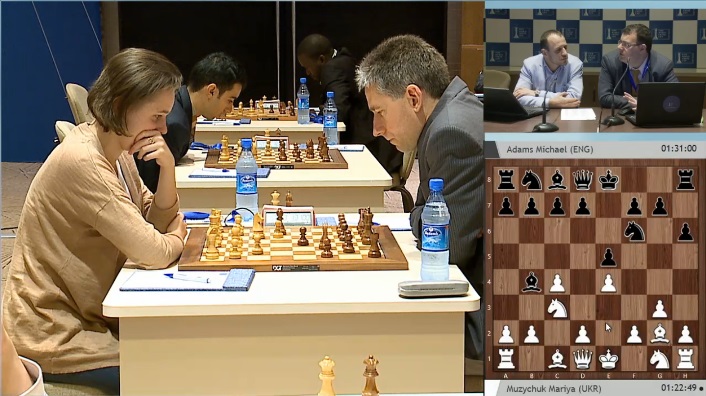 This was one knockout too far for the Women's World Champion

Elsewhere Game 1 upsets were confirmed. Gata Kamsky failed to mount a comeback against Armenia’s Hrant Melkumyan, while 2704-rated Ni Hua of China was also ousted by American Continental Champion Sandro Mareco of Argentina. There was no reprieve for 2699-rated Igor Kovalenko, who we noted in our previous report had failed to learn the knockout art of drawing with the black pieces. He went from a promising, to a lost, to a nominally better position with White against China’s Wen Yang, before a 108-move draw that saw him leave the competition. At least he left us with some more enjoyable commentary, this time on Twitter:

Thanks to everyone who rooted for me! I played terribly, but I know I can play even worse… Till we meet again. Tomorrow’s a new day – new heights.

20 matches are tied after two draws

The list of top players headed for tiebreaks on Sunday without a decisive game is impressive, with Grischuk, Gelfand, Vitiugov, Fressinet, Nepomniachtchi, Jakovenko, Kasimdzhanov and Tomashevsky among those who failed to beat lower-rated opposition. 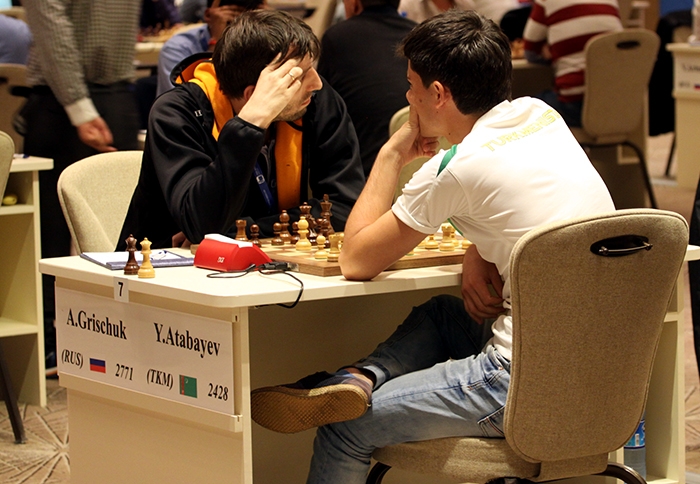 Yusup Atabayev of Turkmenistan will get to play rapid and blitz with world no. 10 Alexander Grischuk | photo: official website

Notable ties included two great fighting games between Azerbaijan’s Teimour Radjabov and 14-year-old US prodigy Sam Sevian as well as the no. 1 rated woman Hou Yifan surviving by the skin of her teeth against Brazil’s Rafael Leitao. 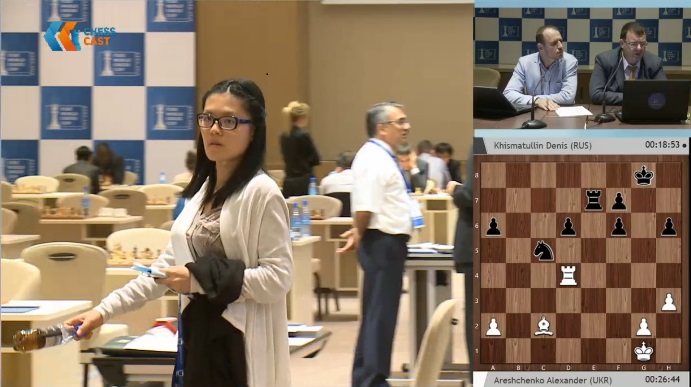 Hou Yifan looked bewildered after the narrowest of possible escapes

The Azerbaijan no. 1 awaits that pairing:

4 matches are tied after comeback wins

This is where the sparks really flew, and none more so than in the game between 2710-rated Moiseenko and 2599-rated Lu Shanglei. The young Chinese player had won the first game, but his highly-experienced opponent came charging back in a great attacking effort analysed by Jan Gustafsson:

Elsewhere Maxim Matlakov (2689) forced tiebreaks by beating the previous day’s local hero Gadir Guseinov (2634), while Serbia’s Milos Perunovic (2614) pulled off a surprise comeback by beating China’s Wang Hao (2712). The most amazing game, though, was the last to finish. 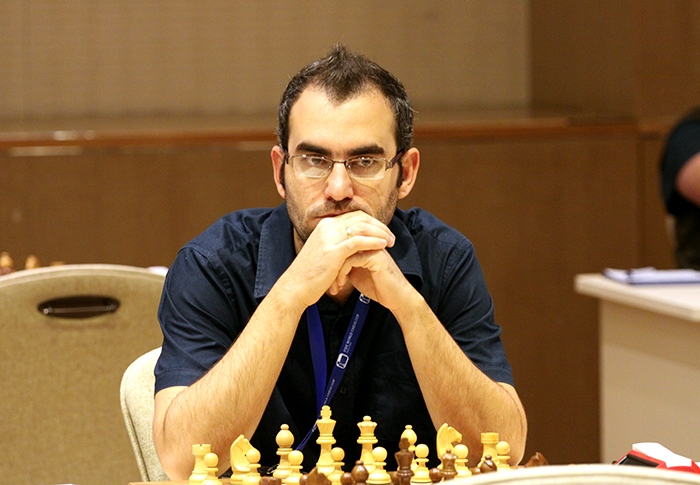 The human and inanimate Houdinis would both have been proud of Dominguez | photo: official website

Argentina’s Federico Perez Ponsa had pulled off the upset of the first day by beating Leinier Dominguez, and he was incredibly close to sealing a place in Round 2:

Here 35…h5, 35…Re8 or 35…Rc8 “would have saved Perez quite some agony – don’t blunder the bishop, basically” (GM Jan Gustafsson). That was just what Perez did, though, with 35…Ke7, and after 36.Ke1 the black clergyman had to give up his life on g4. The endgame with three black pawns vs. one white pawn was still incredibly difficult for Dominguez to win, though, and as late as move 112 or 113 Perez had a draw within his grasp. He eventually cracked, though, and in the final position there’s nothing sensible Black can do to stop mate on h7.

Perez will have to try and pick himself up fast after that setback, since he’ll have another chance in Round 1 tiebreaks on Sunday. 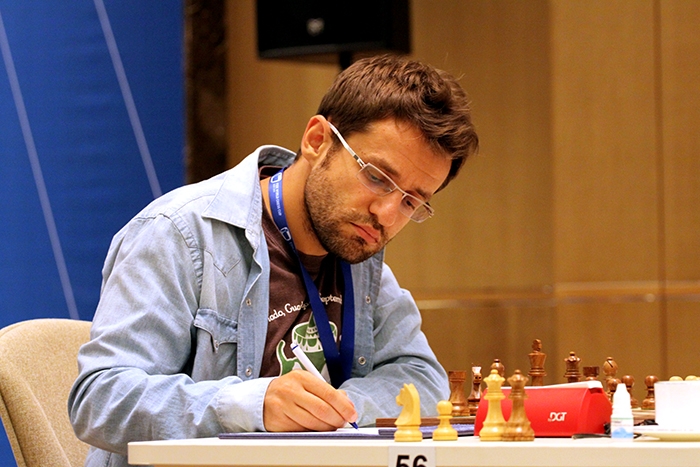 Things were a little easier for Aronian, who's looking very relaxed in Baku so far | photo: official website

Play starts at the same time on Sunday, and it’s going to be spectacular. A winner must be determined in each match based on:

12 Round 2 pairings are already known

We can already look forward to some wonderful action in Round 2, with the following pairings confirmed:

Needless to say, don’t miss our live broadcast of the FIDE World Cup Round 1 tiebreaks at 12:00 CEST on Sunday. 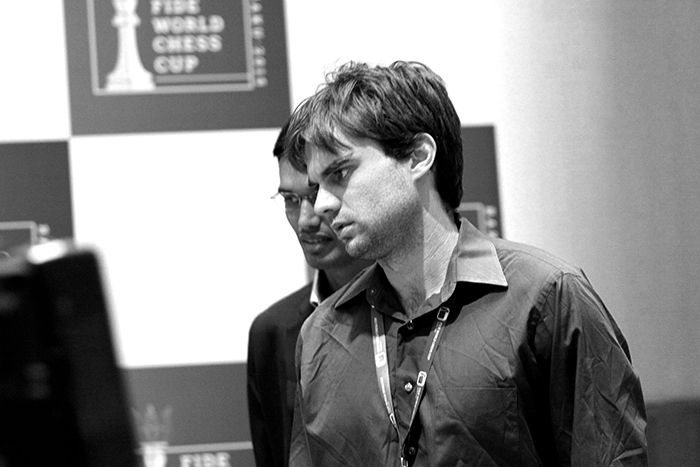 You can also watch all the games in our mobile apps: