There were another four draws in the second round of the Baku Grand Prix, but this time no-one was complaining! At least three of them, including a fantastic battle between leaders Caruana and Gelfand, should have ended decisively, and all were engaging fights. The wins were perhaps more routine, but Nakamura and Svidler won’t mind, after they overcame Andreikin and Mamedyarov respectively. 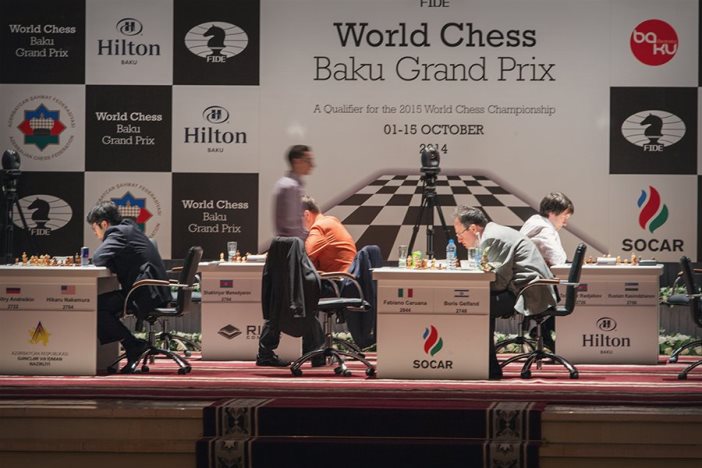 For once someone managed to slow Fabiano down! | photo: Maria Emelianov, official website 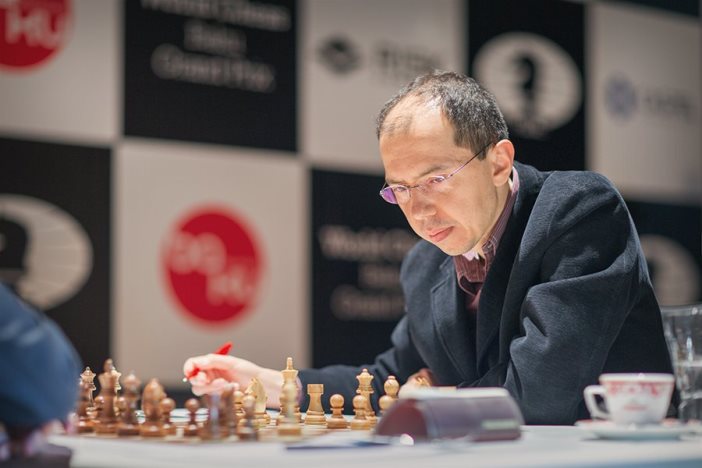 When the day’s least exciting game features a move as beautiful as Rustam Kasimdzhanov’s 20.Nd8!! you know it’s been a good day!

Rook pins on the d-file and the threat of e6 meant the intrepid knight’s sacrifice (if accepted) wasn’t going to be in vain, but Rustam was mildly disappointed in the post-game press conference:

It felt like a nice move to make – if it had been winning it would have been even nicer!

He went on to "blunder" two moves later with, in his words, the “genius idea” of 22.Rf1, but his opponent Radjabov pointed out it was always drawn. Given Rustam’s game the day before had ended in a 30-move draw agreed in a very playable position he couldn’t help but smile when he summed things up:

It’s a hard-fought game that finished in a deserved draw. 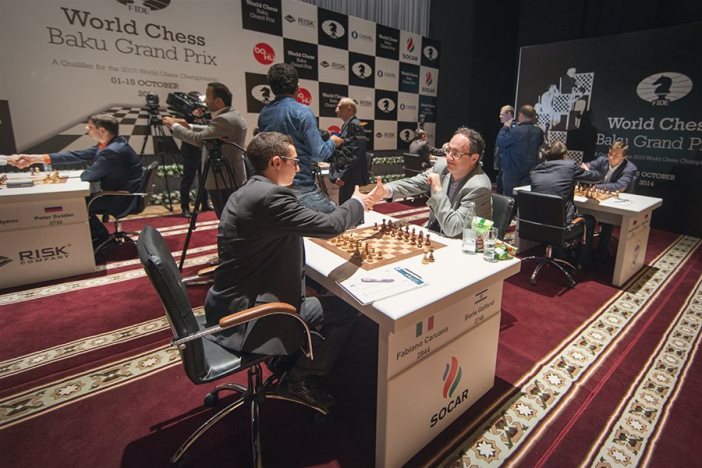 Gelfand came well-armed for a theoretical battle against the world no. 2 | photo: Maria Emelianova, official website

The day’s headline clash between the two leaders didn’t disappoint. Fabiano Caruana tried to surprise Boris Gelfand with 13.Na5, deviating from their game in Wijk aan Zee earlier this year, but the Israeli, with some help from his second Alexander Huzman, was ready and went on to unleash an extraordinary exchange sacrifice:

The play that followed was fiendishly difficult, but curiously it was the other rook’s pendulum swings between e8 and e3 that would determine the outcome. Gelfand, who admitted he panicked after his young opponent played the c5-pawn break, retreated the second rook to e8, leaving Caruana winning for a brief moment.

He’d forgotten that the rook could return again, and after the saving 33…Re3! the game ended in perpetual check. Thrilling chess! 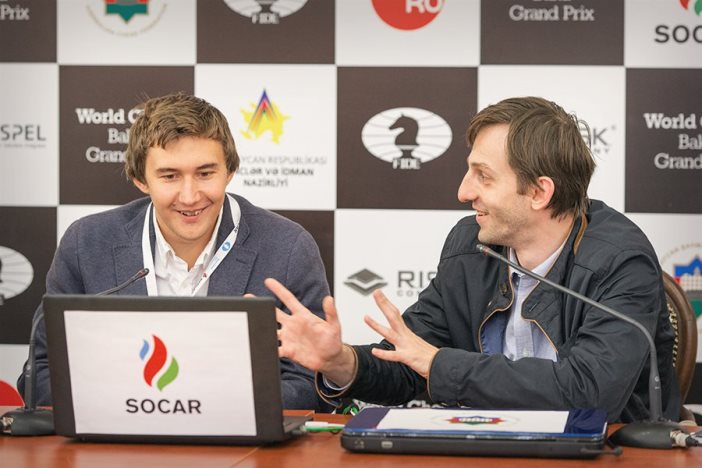 While that miss was understandable it was quite an achievement for Grischuk not to beat Karjakin in the day’s all-Russian encounter. His first goal-mouth opportunity came after 31…Rxd4:

Of course time trouble was a factor, with Grischuk noting:

With 10 seconds left at least I found a good move not to blunder everything – 39. Rf2.

Grischuk explained when he felt the time had come to bring the game to a close:

Actually I offered a draw after I found some way to lose for me. 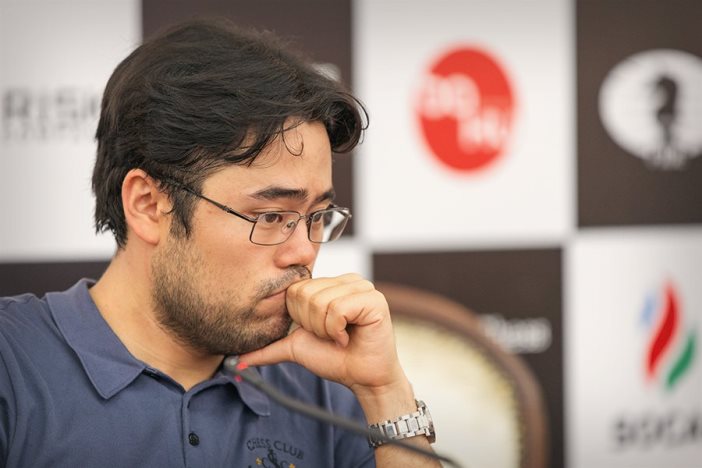 A very welcome win for Nakamura after his recent struggles - taking him up to world no. 7 on the live rating lists | photo: Maria Emelianova, official website

Nakamura said he decided on playing the Dutch Defence against Andreikin since his opponent had only met it once – in a blitz game between them. You certainly couldn’t accuse Andreikin of a lack of imagination after he came up with 16.g4!?:

Hikaru was somewhat bewildered, or perhaps merely being polite, in the post-game press conference:

I don’t really know what to say. The structure here is very strange - it’s not a normal pawn structure and that makes it hard to play for both sides.

0/2 was not the welcome back to chess Andreikin must have been hoping for | photo: Maria Emelianova, official website

Andreikin made a somewhat shambolic impression both in the game and the subsequent press conference, where he turned up late and proceeded to chime in with some unconvincing variations. Sure enough, Nakamura was soon well on top, and it only became a question of when his opponent would resign. The moment he chose surprised Hikaru and was perhaps no more resignable than any point in the preceding ten moves, but Dmitry had certainly suffered enough. 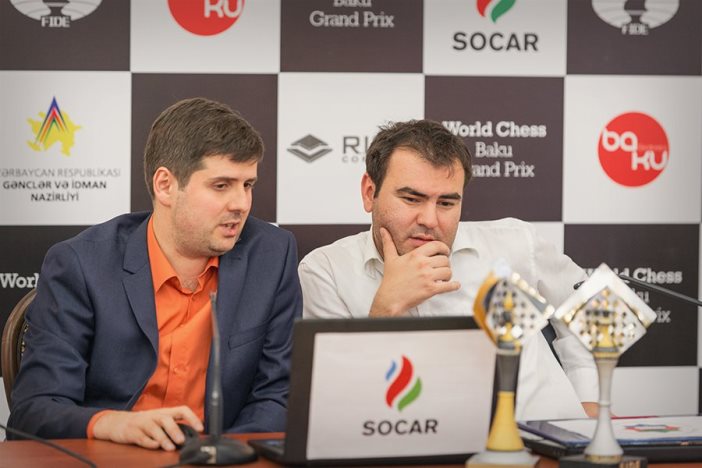 Svidler was the happier of the two that his opponent had made it to the game on time! | photo: Maria Emelianova, official website

This game almost didn’t happen, since Mamedyarov got stopped at a traffic light stuck on red and was close to being forfeited on the zero tolerance rule. Svidler said he was “rooting for Shakh to make it”, while in the cold light of day after the game was over Mamedyarov wished he hadn’t!

Things went wrong early for Mamedyarov in a complex opening, and his 14…c5 break could easily have backfired:

White is well on top in the complications after 15.Ba6!, but it wasn’t to be. Svidler:

I played 15.dxc5 immediately and then saw 15.Ba6. It’s a bit mystifying why I didn’t think longer about this.

In the end no harm was done, as it turned out Svidler could completely ignore Mamedyarov’s threat to take on a2 after the Azeri played 30…Ra8 - with 31.Bd6!

Shakh just missed Bd6 and then it went downhill from there because in five minutes he couldn’t really readjust to the new landscape.

So this was the “only” game that was left – a 100-move nail-biter that came down to a heavy-piece ending where the weak black king gave Leinier Dominguez excellent winning chances. He did in fact manage to torture his opponent into submission, but then failed to spot the wins with very little time to think. A fitting end to a wonderful day’s chess. 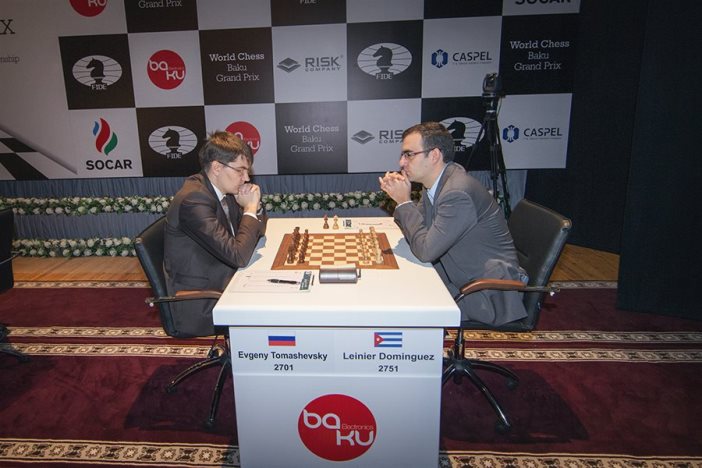 Little did they realise this was going to be an epic encounter | photo: Maria Emelianova, official website

So after two rounds we have four leaders - Caruana, Gelfand, Nakamura and Svidler on 1.5/2 - and one player yet to get off the mark - Andreikin.

Let’s hope for more exciting chess in Round 3, where Nakamura-Caruana looks like being the game to watch. You can replay all the games so far, and watch the action live with computer analysis and video commentary here on chess24.