The USA go into the final round of the Baku Olympiad knowing a win over 25th seeds Canada will likely give them gold medals for the first time since 1976. Ukraine have the same number of points, but are currently behind on tiebreaks, so a win over 29th seeds Slovenia may not be enough. Russia, meanwhile, have 36th seeds Italy, but after a draw with India in Round 10 a win will only guarantee Russia bronze medals. The women’s pairings are more satisfying, with Russia trailing China by two points but getting the chance to play them in the final round. 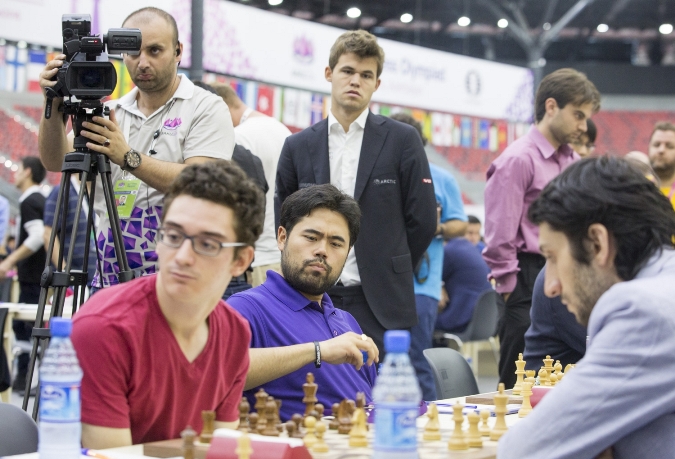 Traditions, both good and bad, continued in Round 10 of the Olympiad: 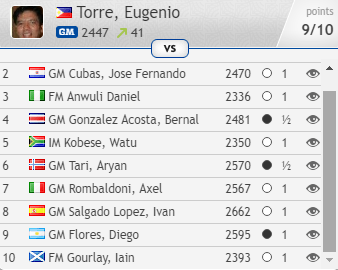 Anish Giri drew a 7th straight game after teasing us all with three wins at the start of the event. Even technical gremlins are trolling him (if you’ll pardon the mixed metaphor) as his game against Ferenc Berkes was long broadcast as drawn on move three


Li Chao and Arkadij Naiditsch keep on losing, with the usually solid Chinese player falling to a third defeat in a row against Aleksej Aleksandrov of Belarus. Arkadij had started with four wins, but now has four straight losses, with England’s Gawain Jones his conqueror in Round 10. 3rd and 4th seeds China and Azerbaijan are down in 20th and 21st places before the final round – which partly explains why we’ve run out of big clashes for the top teams. 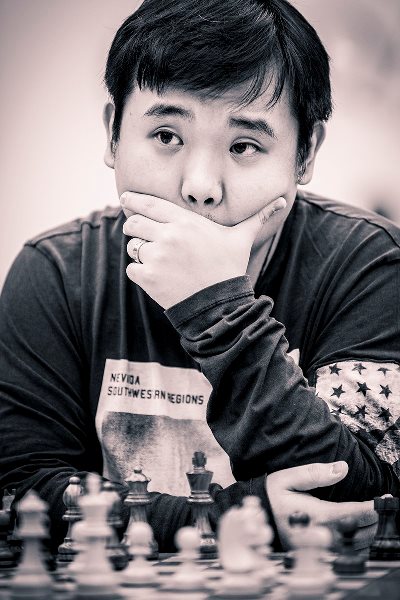 Greece are almost there! With ten rounds gone the modest Greek team is yet to taste defeat in Baku, something only the USA can join them in boasting. In Round 10 Spain’s Vallejo won on top board, but Stelios Halkias (6/8) hit back to level the scores. 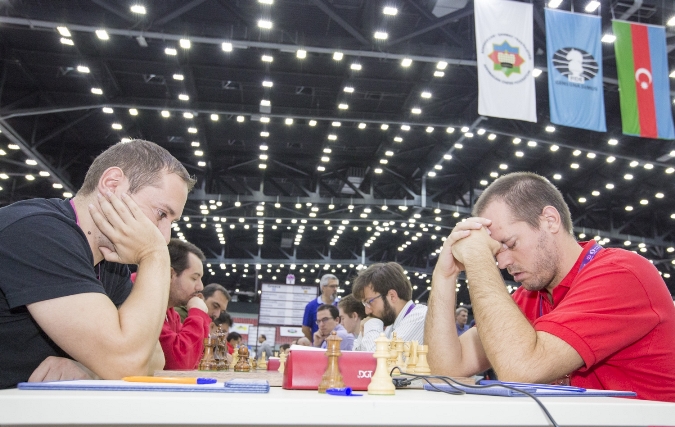 If they can survive their match against Hungary in the final round it’ll be an achievement almost as impressive as the football team winning Euro 2004.

The main tradition of the Baku Olympiad, though, has been the USA’s relentless march towards the title. Jan Gustafsson takes us through the highlights of the top matches in both the Open and Women’s sections:

To briefly recap: the USA got the job done 2.5:1.5 against Georgia, though there was a twist. Few could have foreseen Hikaru Nakamura pushing too hard on board two against 2609-rated Mikheil Mchedlishvili. It ended in a famous win for the Georgian, who talked to Anastasia Karlovich afterwards:

Before the start Georgia’s hopes had lain in Baadur Jobava, who’s currently running away with the Board 1 prize. Fabiano Caruana neutralised the opposition’s superstar, though, just as he’d done the day before to Magnus Carlsen.

That left Wesley So and Sam Shankland to finish the job on the lower boards.

Ukraine hadn’t given up the chase, though, and scored a 3:1 victory over the Czech Republic. Pavel Eljanov had won his first game in Baku and then drawn four and lost two, but he picked the perfect time to return to form, defeating David Navara. He talked about the tournament so far:

With draws on the middle boards Andrei Volokitin put the icing on the cake with his 7th win in 8 games in Baku. The one draw he conceded was to Wei Yi. 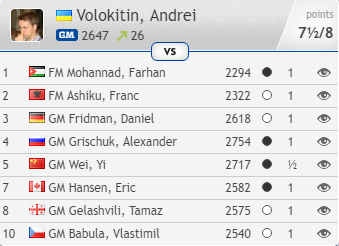 If those pairings had clear favourites, it was somewhat unfair on both India and Russia that they met in the penultimate round. Both needed a win to satisfy their ambitions and both left disappointed, though also with something to cheer. Harikrishna defeated Sergey Karjakin, proving that there are positions that even Magnus Carlsen’s challenger can’t defend. 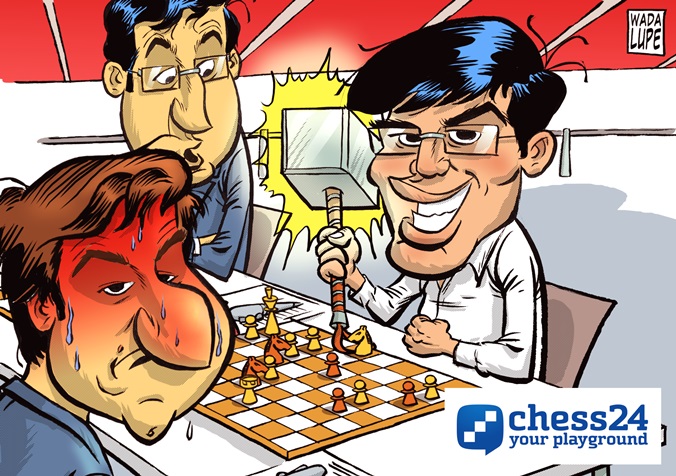 An exclusive photograph from the venue...

Vladimir Kramnik, meanwhile, got a second swashbuckling win with the white pieces in a row. His victory over Adhiban meant 41-year-old Vlad is back at world no. 2 with a 2815.1 live rating. His highest ever live rating of 2817.5 would be beaten with a last-round win - and stick to become the official FIDE rating in October. 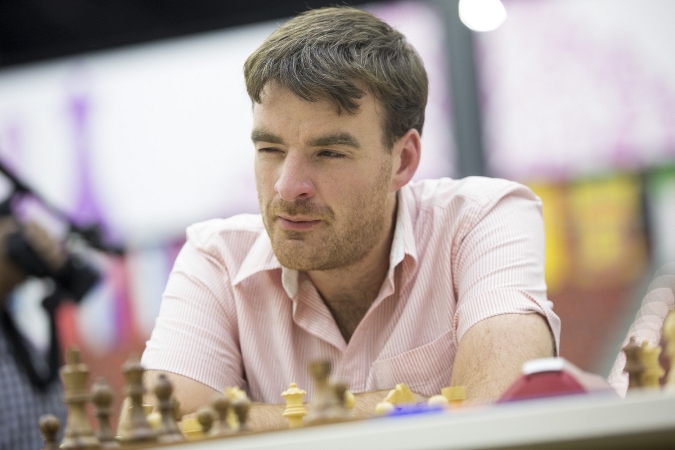 Much else went on, including England beating Azerbaijan 2.5:1.5 and Norway sweeping aside the talented Iranian squad 3:1, but let’s get to the standings before the final showdowns:

That produced final board pairings that are more than a little unusual – you have to skip the first 16 (or given Magnus’ rating, 17) games before players of similar strengths meet:

What we can say for certain is that the USA and Ukraine will win medals of some colour, and Russia will win bronze (and shut the door on the seven teams on 15 points) if they win their match against Italy. The USA lead on the Sonneborn-Berger tiebreak and seem to be favourites if they can match Ukraine’s result, though that can get very complicated: 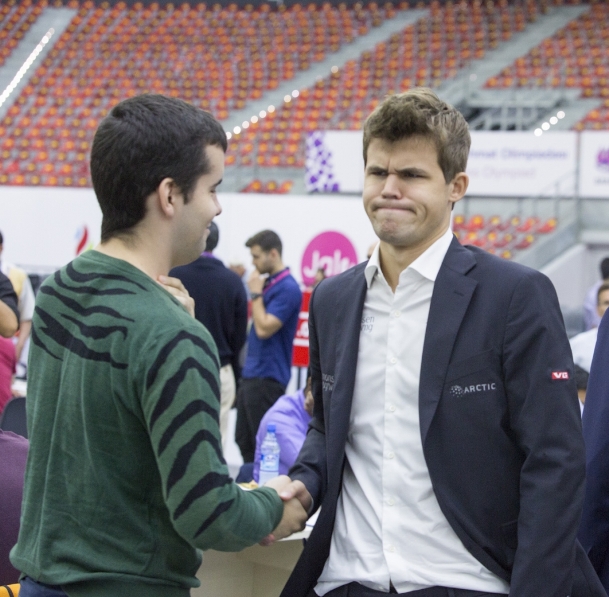 If it doesn’t work out for the US squad, at least they know what to do…

Russia could probably sneak into gold if both the USA and Ukraine lose, but with luck like that it might be better to buy lottery tickets instead!

Just when China thought it was over...

The women’s section of the draw has reached a much more satisfying conclusion. In Round 10 six of the top seven teams played each other, and the matches were as close as expected. Ukraine and India cancelled each other out, Russia scraped past the strong Georgian team while China shattered Polish hopes in a match that initially seemed to be going in Poland’s favour. 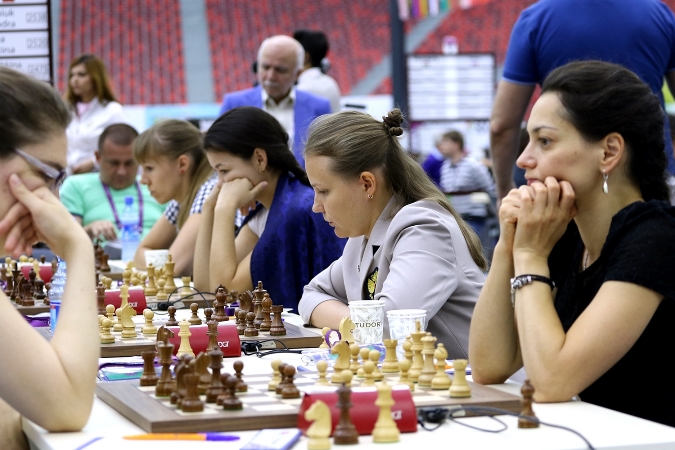 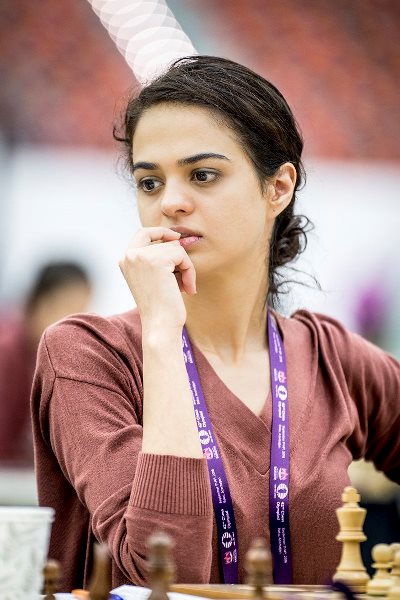 The standings going into the final round are as follows:

As you can see, China are now guaranteed at least silver medals, but gaining gold for the first time since 2004 is anything but a formality. They must first draw or beat their key rivals Russia, who know a victory would give them the Olympiad title for the fourth successive occasion. Imagine the tension out there in Baku!

You can rewatch the Round 10 commentary below: