Forfeits aside, Bulgaria were the only team out of 152 favourites to fail to win in Round 1 of the 2016 Baku Olympiad. Despite Veselin Topalov doing the business on top board, the 22nd seeds were held to a 2:2 draw by 110th seeds Sudan. Elsewhere there was a swathe of 4:0 whitewashes for the top teams, though not without some close scrapes. The Game of the Day was a sparkling win for Chinese prodigy Wei Yi – don’t miss video analysis from IM Nikolas Lubbe. 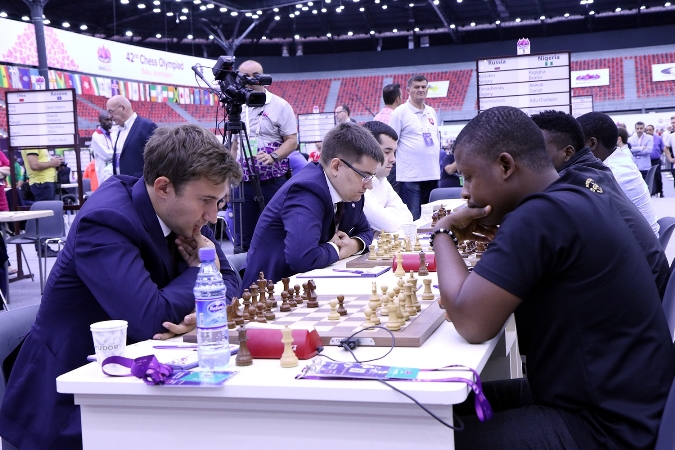 Top seeds Russia got off to a 4:0 win over Nigeria | photo: Eteri Kublashvili, Baku Chess Olympiad

The first round of a huge open team event like the Olympiad always features some of the same storylines.

The top teams can afford not to unleash all their firepower in Round 1, which meant the world’s Top 4 players - Carlsen, MVL, Caruana and Kramnik - all have to wait to make their Baku Olympiad debuts. Of the teams they represented it was only Norway that were running any risk and again, as in the 2014 Olympiad, they showed some signs of frailty: conceding two draws to Wales. 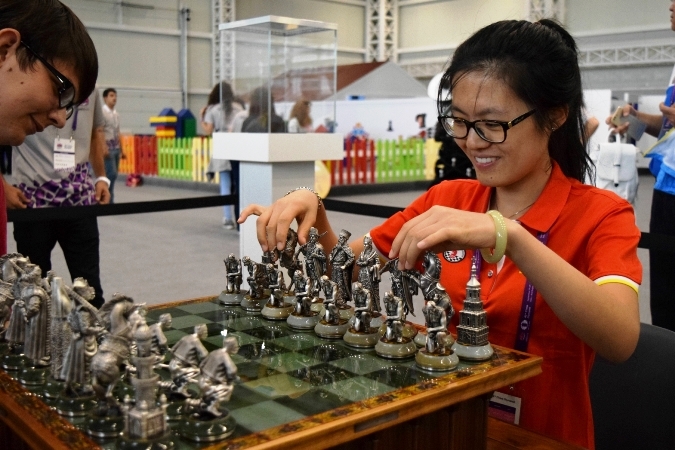 They may have had 600 DGT boards in the playing hall, but Hou Yifan preferred something a little more exotic as she sat out Round 1 | photo: Rasim Huseynov, Baku Chess Olympiad

As always, we got missing teams who won't make it to Baku or are still on their way. In the Open section eight teams weren’t paired at all, while 11 teams were paired but forfeited all four of their games, including Mexico, whose 4:0 loss to Ivory Coast (captained by Maurice Ashley) would have been the sensation of the day… if any chess had been played. There were also some individual absentees, with Russia not really needing the helping hand they were given when no-one from Nigeria showed up to play Alexander Grischuk (the top seeds’ board 5!). Still, the Olympiad isn't lacking in teams...

Wiring over 600 boards and then ushering 1200 players to sit in the right places is always liable to end with some mishaps, and it added a little spice to proceedings! For a while Botswana were crushing the up-and-coming Iranian team, while David Howell lost as England looked like justifying their place on the last (well, penultimate – since Costa Rica-Lesotho was added later) board of the whole Olympiad:

The reason for that position was that their opponents, the International Braille Chess Association team, needed special boards and assistance. It also allowed for a joke or two when the colours were finally switched:

Both favourites ultimately turned out to have scored 4:0 wins, and they weren’t alone.

Around 60 other Open teams managed the same feat - yes, we lost count, and yes, the forfeits helped! The proportion of whitewashes in the women’s event was even higher, with almost the same number of 4:0 scorelines. 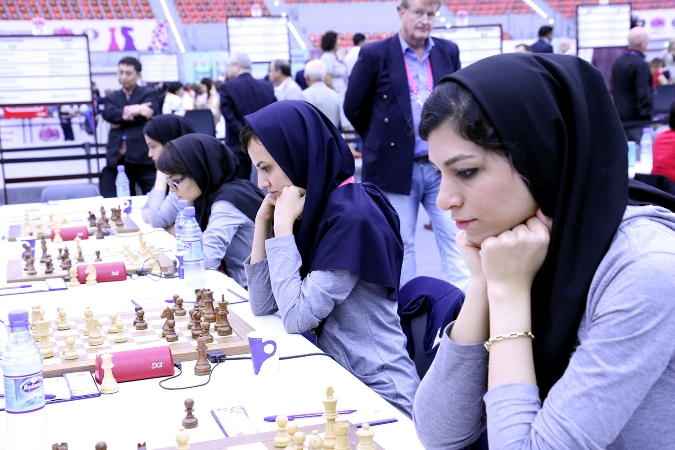 That didn’t mean there wasn’t some fun along the way, though – take the top boards in each section. At first glance this was a rather unusual position for World Championship Challenger Sergey Karjakin’s queen to find itself in on move 11:

He had everything under control, though, and after 11…Na5 he emerged an exchange up after queens were swapped off. In the women’s section our very own Fiona Steil-Antoni, representing Luxembourg, faced a somewhat tough challenge!

In the end Ju Wenjun justified her world ranking, but there was a moment when Fiona could have turned the tables:

The inevitable jokes returned in chat when Anish Giri had achieved a 0.00 computer evaluation with the black pieces by move 17, but he had the last laugh as the evaluation kept swinging in his favour:

Meanwhile, a great candidate for Game of the Day was an effort by Andorra’s Oscar De La Riva Aguado, who came out all guns blazing against Wesley So – what about this for a position on move 16?

It seems it wasn’t entirely sound, but Oscar looked well on course for a deserved draw, before he picked the wrong square for his king:

That wasn’t the Game of the Day, though, for two reasons. The first is this: a wonderful miniature by 17-year-old Wei Yi, which has been analysed by IM Nikolas Lubbe: 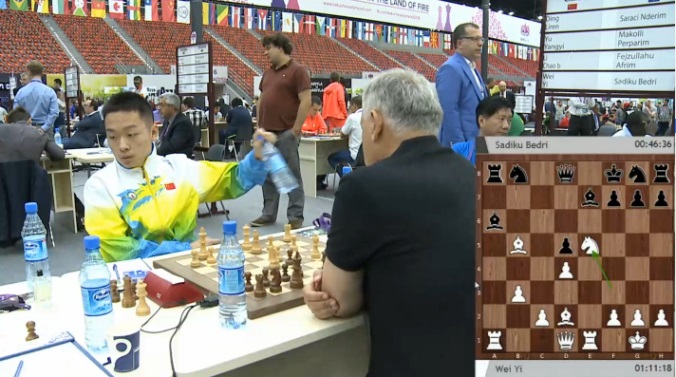 Wei Yi lived up to his tracksuit...

The other reason is…

There were some other individual upsets – e.g. Trinidad and Tobago FM Kevin Cupid beating Serbian GM Nikola Sedlak, but out of all the matches in both sections only one finished in a draw, with Sudan shocking Bulgaria.

It hasn’t been a good year for the Bulgarian Chess Federation, to put it mildly, with President Silvio Danailov embroiled in a battle over allegations that include diverting funds intended for the European Chess Union to a similarly named shell company in the US tax haven of Delaware. The Olympiad team is missing the Bulgarian nos 2-4, with Ivan Cheparinov in particular a hard man to replace. His explanation for his absence didn't meet with Danailov's approval:

And then there was Round 1 in Baku… On board 4 untitled Abdelazeez convincingly beat IM Petrov, while on board 2 Abubaker Tagelsir blew GM Nikolov Momchil to smithereens.

17.Nxe6! unleashed the power of the white pieces, with Momchil soon forced to jettison material in the hope of stemming the onslaught… but it never came close to working.

The Round 2 team pairings are already available in our broadcast system: Open | Women

The individual board pairings will appear in the morning when the team captains have submitted their final line-ups, but we can already anticipate some much tougher battles. For instance, Richard Rapport’s Hungary face Markus Ragger’s Austria, while Georgia and Baadur Jobava take on the prodigy-packed Iranian team. It remains to be seen if Norway will feel the World Champion is needed for their clash with Bangladesh. Magnus is in Baku... and Oslo!

The Round 2 action starts at 13:00 CEST on Saturday 3 September, with live commentary by GMs Illescas and Miroshnichenko. Don’t miss it! Open | Women

You can replay Round 1 below:

You can also follow the games on our free mobile apps: