Baden-Baden have won the 2016-7 German Chess League with two rounds to spare, after the team that boasts Caruana, MVL, Aronian and Anand among its ranks won its 13th match in 13 this season. Sunday’s showdown with 2016 winners Solingen will now be a formality as far as the title is concerned, though we can expect to see top players in action and Baden-Baden will still be chasing a perfect 100% score. The women’s Bundesliga is going down to the wire, though Schwäbisch Hall are big favourites after a narrow win in Round 13. 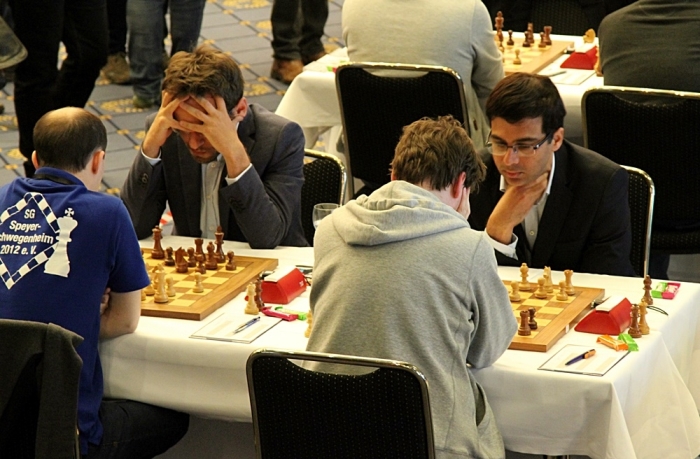 The final three rounds of the German Open and Women’s Chess Leagues are taking place this weekend in one location – Hotel Maritim, bang in the centre of Berlin. There are 16 men's team, 12 women's teams and each day 100 games will be played and broadcast live here on chess24, with commentary by Grandmasters Pepe Cuenca and Jan Gustafsson… assuming he’s not required by his team Baden-Baden. 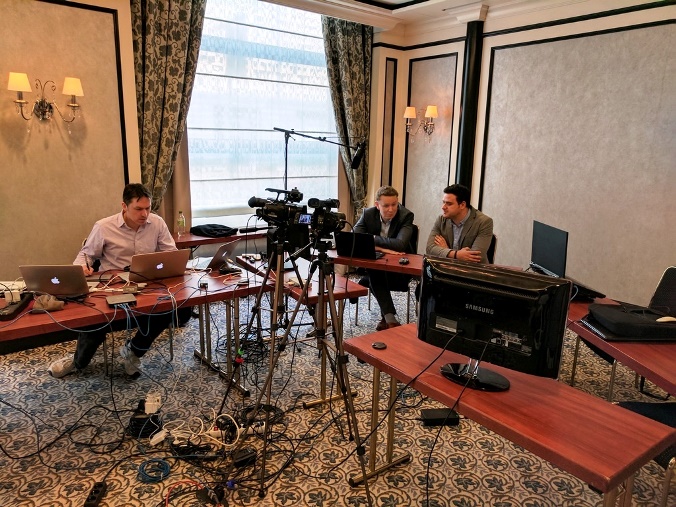 Baden-Baden sacrificed the talents of Jan Gustafsson on the chessboard so he could join Pepe Cuenca in the commentary room, with Macauley Peterson taking care of the broadcast | photo: Rasmus Grapentin

Order is restored to the universe

Saturday was always likely to see the title decided in the men’s German Chess League (or Schachbundesliga, if you prefer the compound German word). As we reported after 10 rounds, Baden-Baden’s rivals had been fading in recent rounds and, going into the final weekend, the double-barrelled team had a 5-point lead with only 6 points still up for grabs – there are 2 points for each match win and 1 for a draw. On Saturday their opponents were Speyer-Schwegenheim, who started the day a single draw in an individual game above the four relegation spots. That meant a fierce fight was guaranteed – Kasimdzhanov 1/2-1/2 Nemeth was the last game of the day to finish after over 7 hours and 113 moves – but it was only likely to end in one way. The final scoreline: 7:1 to Baden-Baden. 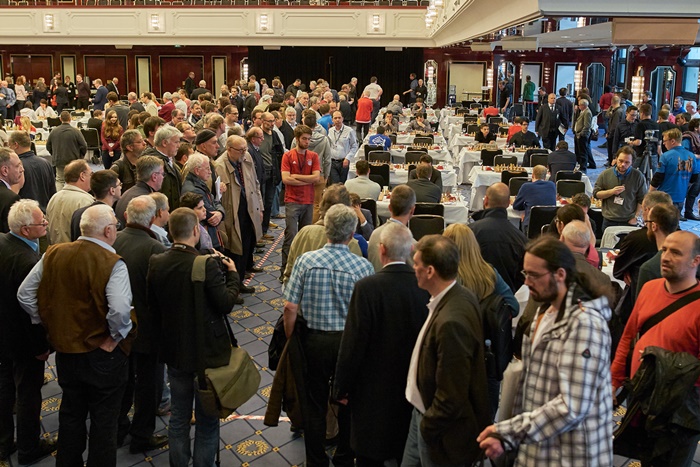 Check out all the games below (click on a result to go to the game with computer analysis):

Given Baden-Baden’s embarrassment of playing riches the task is often how to approach games against players you heavily outrate. Levon Aronian, who was making his first appearance of the season, went into some detail about how much risk he’s willing take as he commentated on his win over GM Adam Horvath (2498). He felt he managed to lure his opponent into a tricky ending:

There were some curious moments at the very end:

Here it seems Horvath could have held on with 51.Rd1! or 51.Re1!, with the point that he’s prepared to give a check and give up the rook for the a2-pawn - the white kingside pawns have enough potential to cancel out the black rook. After 51.Rh1?, though, there was no check, and White resigned after 51…Rc5 and the simple threat of Rc1 next move.

That was nothing compared to what happened in Vishy Anand’s game, though. It was the former champion’s 3rd game for Baden-Baden in 2016-7 and he played with some of the old attacking freedom and flare he’d shown in the recent Zurich Chess Challenge. 25.Bf6 set up the kind of position you might not want to see if you’re playing Black against a World Champion: 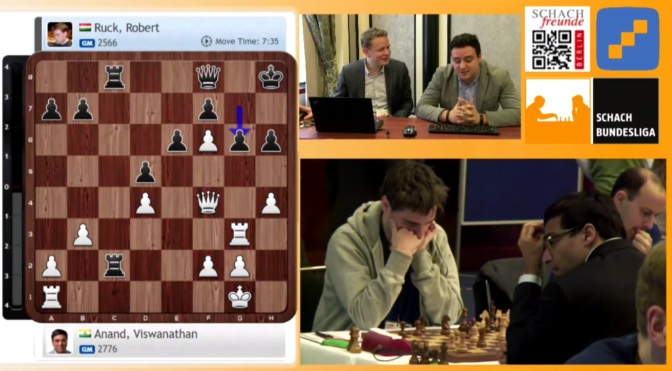 The problem for Robert was that Vishy had been playing fast and there was no time for any deep thought at this stage. He went for the pragmatic 29…Rc1+ 30.Rxc1 Qxc1+ 31.Kh2 Qxf4 and queens were exchanged, leaving a rook ending that was drawn relatively quickly. Instead he could have gone for 29…Qb2!, hitting the a1-rook and the d4-pawn. After e.g. 30.Re1 Rc1, threatening to win the white queen by taking on e1 and entering with the other rook, the best White seems to be able to do is give up the d4-pawn and grovel for a draw.

The match result was never in the slightest doubt, though, and the 2016-17 Champions are Baden-Baden:

There were no real sensations elsewhere either, though it was notable that Jorden van Foreest, just back from finishing 2nd in the Reykjavik Open, went down to Viktor Erdos. The young Dutchman's sense of danger, or calculation, failed him in the following position:

22.Qxc4?! ran into 22…Ba6 and soon White was simply down a full exchange and duly went on to lose the game. 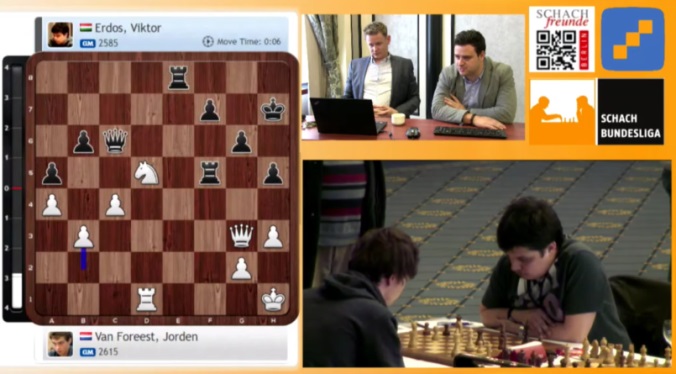 The biggest upset was Michael Feygin (2468) beating Markus Ragger, a result that saw Ragger’s team Solingen only scrape a 4.5:3.5 win over Mülheim Nord. Those two teams are Baden-Baden’s opponents in the final two rounds.

Even Baden-Baden can't win it all

In the women’s section, meanwhile, Schwäbisch Hall hold a 1-point lead over Baden-Baden, and after Saturday’s round it seems unlikely they can be caught, since they play the 10th and 11th-placed teams in the final two rounds. On Saturday against Deizisau their top board Lela Javakhishvili lost her first game of the season to Yuliya Shvayger and they also lost on board 4, but Deimante Daulyte (7 wins out of 7 for the team this season!), Petra Papp (3/3) and Jovana Rapport (3/3) clawed out wins in 66, 75 and 52 moves to win the match and probably the Women’s Bundesliga title. 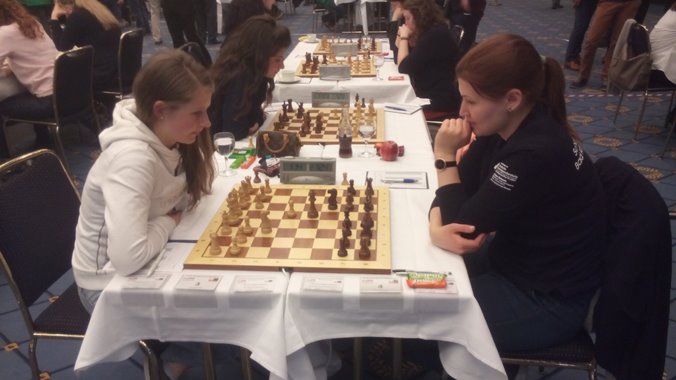 Georgios Souleidis interviewed Lilit Mkrtchian about her impressions of the event in Berlin after her win over her friend Julia Movsesian:

The final two rounds of the event take place on Sunday at 14:00 CEST and then on Monday at 10:00 CEST, with more top players (Fabiano Caruana has been spotted...) likely to be involved. 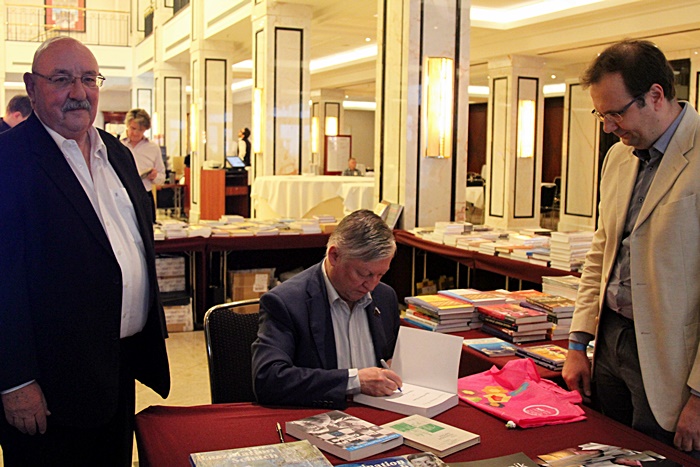 Anatoly Karpov was in the house on Saturday for an autograph session | photo: Georgios Souleidis, official website

Tune in to commentary from Jan Gustafsson and Pepe Cuenca here on chess24: Open Chess Bundesliga | Women's Chess Bundesliga. You can also follow all the games in our free mobile apps: