China’s Wang Hao has repeated the 4.5/5 start that propelled him to victory in the recent Sharjah Masters to take the sole lead in the Asian Championship in Chengdu after five rounds. Amid an ocean of draws, just two teenagers are within half a point – China’s Bai Jinshi and India’s Aravindh, who beat former World Champion Rustam Kasimdzhanov in Round 5. In the women’s event Lei Tingjie’s fine start was ended by Pham Le Thao Nguyen from Vietnam, who also has the sole lead on 4.5/5. 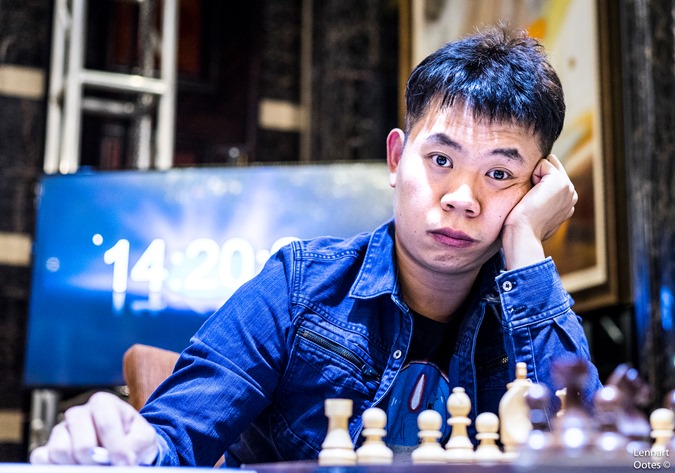 You can replay all the games from the Asian Championship using the selector below – click a result to play through a game with computer analysis or hover over a player’s name to see all their results so far: 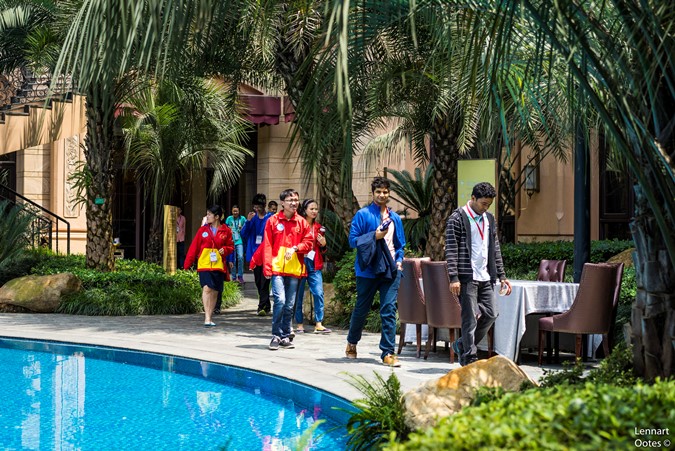 Wang Hao is still only 27 years old, but health problems and perhaps the Chinese policy of “retiring” their players very early (encouraging them to work as coaches) has seen him drop off the elite circuit where he used to be the go-to man as the top Chinese star. He’s switched to the open circuit and proven his class has gone nowhere by winning events such as the HD Bank Masters, the Al Ain Classic and most recently the Sharjah Masters in the United Arab Emirates. In Chengdu, as in Sharjah, he’s started with 4.5/5: 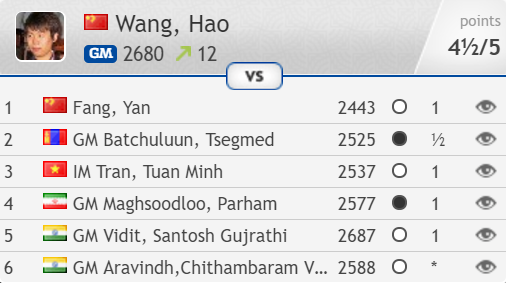 In other cases you might expect that 21-move draw in Round 2 to have knocked Wang Hao down the standings, but it came on a day when 7 of the games on the top 8 boards were drawn. That draw fever continued in the following rounds. In Round 3 against Tran Tuan Minh Wang Hao got the only win on the top 9 boards – 35.c5! was a perfectly timed break: 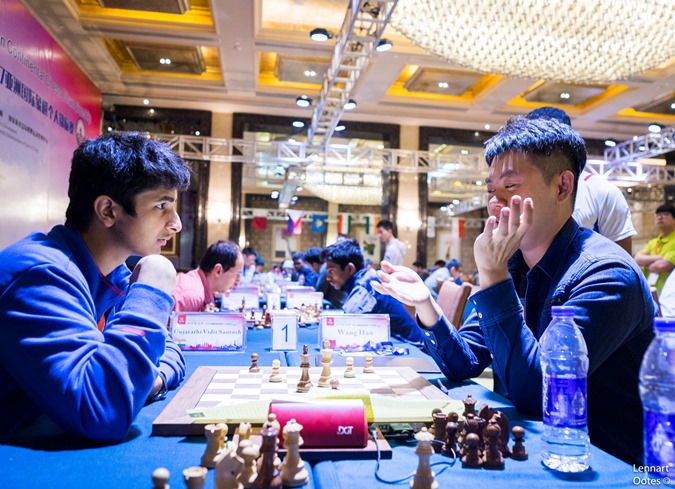 Wang Hao first took the sole lead with the only win on the first five boards in Round 4, showing he can also play fine technical games in his endgame defeat of 16-year-old Iranian prodigy Parham Maghsoodloo. In Round 5 it was the turn of 22-year-old Indian star Vidit to suffer. After a sharp theoretical battle that left Black’s king stranded in the centre of the board, Wang Hao went on to win a pawn with a double attack and then correctly assess a pawn ending:

White is simply winning, as Wang Hao smoothly went on to prove. 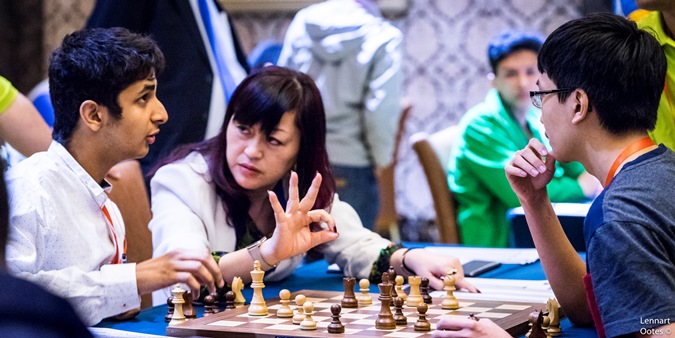 Vidit might have had an extra half point if not for stumbling into a 3-fold repetition in Round 2 | photo: Lennart Ootes 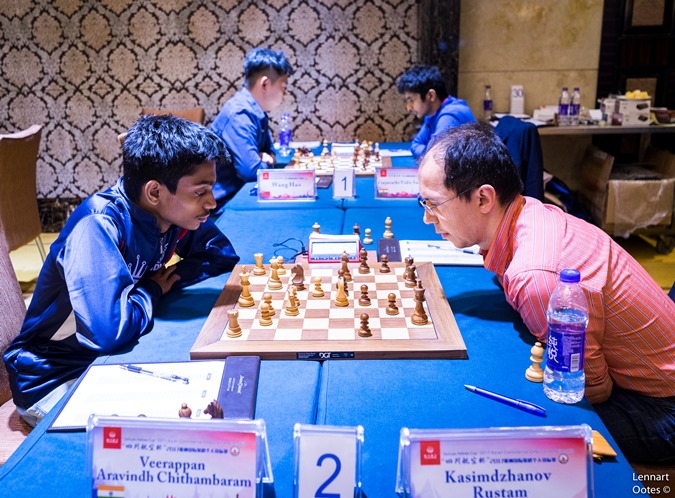 Rustam Kasimdzhanov was once a prodigy himself, reaching world no. 11 as a 21-year-old, but on Tuesday in Chengdu it was the young Indian star Aravindh who was celebrating | photo: Lennart Ootes

Behind the “veteran” Wang Hao it’s the youngsters that have so shone in what is a gruelling nine-round event without a rest day. 17-year-old Indian star Aravindh showed the fearlessness of youth as he took advantage of former World Champion Rustam Kasimdzhanov’s 24…Rd8!? here to castle:

25.0-0-0! After that White was able to consolidate, pick up a pawn and win the ending. Aravindh moved to half a point behind Wang Hao on 4/5, where he’s joined by 18-year-old Chinese player Bai Jinshi, who drew both Kasimdzhanov and Aravindh before beating Sethuraman in Round 5.

A surprise absence at the top is that other 17-year-old everyone’s talking about - Wei Yi. The Chinese prodigy has drawn all four of his games since Round 1, though it definitely hasn’t been for the want of trying. 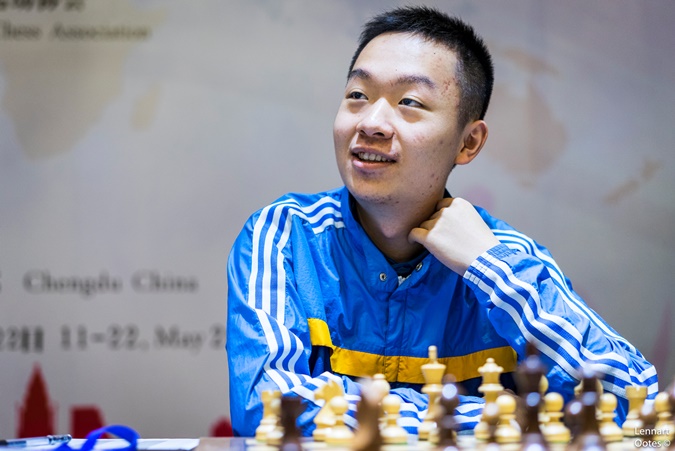 Wei Yi found a way to beat weaker players on demand in the recent Chinese Championship, but has struggled in Chengdu so far | photo: Lennart Ootes

He’s gone for early kingside pawn assaults with both White and Black and got to do his thing in the Sicilian in Round 3:

According to the pgn file Indian Grandmaster Sandipan spent 4.5 minutes on deciding to meet Wei Yi’s 1.e4 with the Sicilian Defence, which would be understandable caution given the Chinese player’s sequence of brutal wins against 1…c5. On this occasion, though, Sandipan seemed very well prepared and didn’t hesitate to accept the piece sacrifice when Wei Yi went for 16.0-0! here. What followed was an extremely sharp and well-played game by both sides that ended nicely:

Wei Yi is 1.5 points adrift of Wang Hao in the 18-player tie for 13th place, with the standings at the top after 5 rounds as follows: 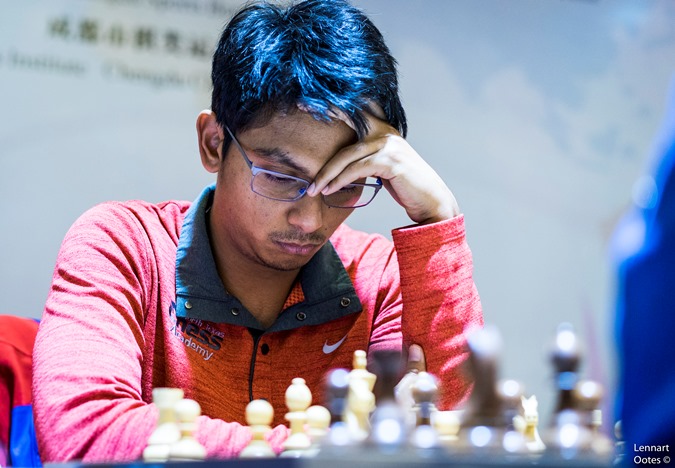 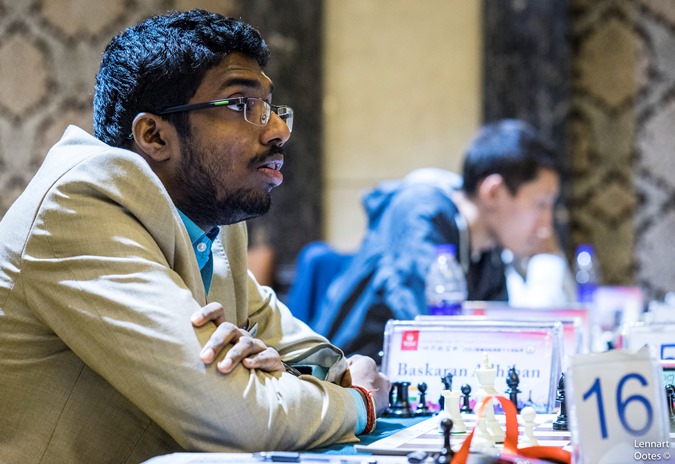 Lei Tingjie’s 39…e5? was a disastrous break on the verge of the time control. After 40.fxe5 Ne6 41.c3 she’d lost a crucial central pawn for nothing. It’s not clear what she missed, since 40…Rxe5 is playable due to the pinned d4-pawn, but simply allows 41.Rxf6. Pham drew a compatriot in Round 5 to lead alone on 4.5/5 going into the final four rounds. 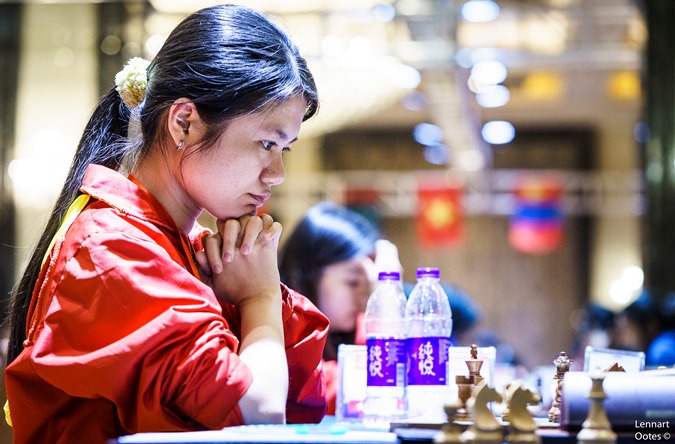 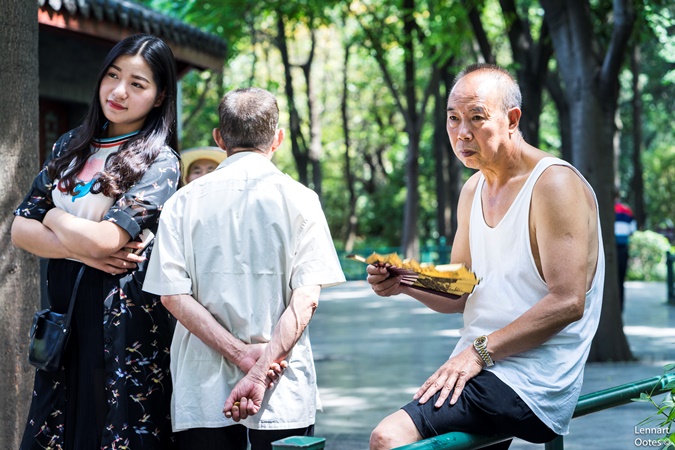 Meanwhile in Chengdu's People's Park, you don't need to face the camera to make an impression | photo: Lennart Ootes 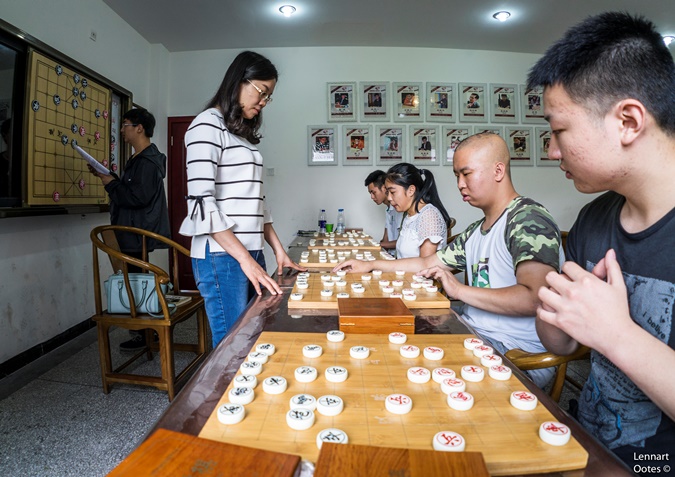 Games start at 8am CEST each day and you can follow the action here on chess24: Open | Women You can also watch the games in our free apps: