Yu Yangyi, Adhiban and Vidit were all held to draws on Day 1 of the 2017 Asian Championship, with 22-year-old Indian star Vidit coming within a whisker of defeat. In the women’s section 4th seed Padmini Rout did lose, to her 220-point lower-rated compatriot Kiran Manisha Mohanty. The 9-round event gets serious fast, with Wei Yi already facing a player in Round 2 who he shared 2nd place with one year ago – India’s Deep Sengupta. 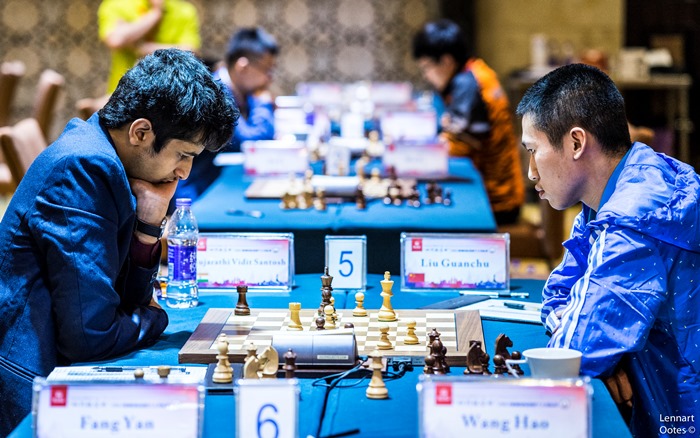 Vidit unexpectedly found himself with a huge fight on his hands | photo: Lennart Ootes

The 2017 Asian Championships are two 9-round Swiss opens taking place from 12-20 May in Chengdu, China, a city that’s held major chess tournaments in the past but is still best known for some local inhabitants. The invaluable sinochess tweeted some useful links

You can see all the results, pairings and play through games using the selector below – click a result to open it with computer analysis:

17-year-old Wei Yi recently won the Chinese title for the third time in a row, winning all five games he played with the white pieces. To say he took up where he’d left off in Chengdu would be an understatement, especially considering he played the same player as he did in Round 1 of the Chinese Championship. 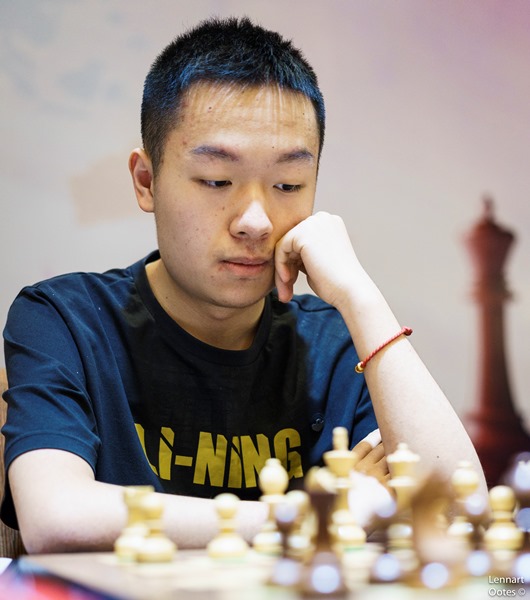 Fresh from winning a 3rd Chinese Championship, 17-year-old Wei Yi is one of the players to beat in Chengdu | photo: Lennart Ootes

Back then IM Xu Yi held on a pawn down with White to snatch a 174-move (!) draw against Wei Yi, but playing the world’s top junior with Black is a whole different matter. Xu Yi avoided the beginner’s mistake of going for the Sicilian against the young tactician and opted for the Ruy Lopez, but when he sacrificed a pawn and went for aggressive piece play the writing was on the wall:

Xu Yi stumbled and Wei Yi was ruthless in converting his advantage to reach a position where the black knight was simply no match for White’s three connected central passed pawns:

Wei Yi played 45.Qf7+ and went on to win in 53 moves, less than a third as long as their last encounter. 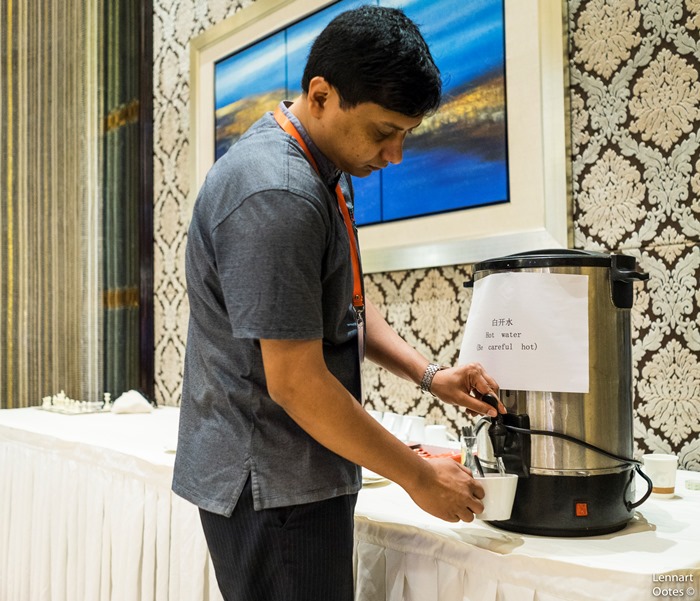 A helpful reminder that hot water may be hot | photo: Lennart Ootes

As you would expect in the first round of an open, other favourites largely won as well, but there were some high-profile exceptions. 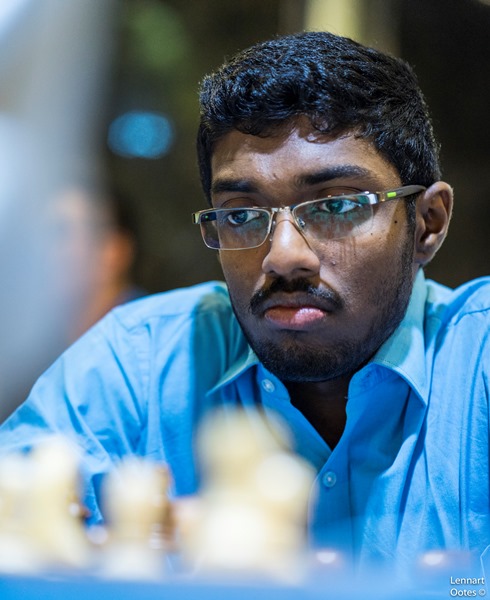 Adhiban won't be playing any Banter Blitz here on chess24 for the next couple of weeks, since he's busy in Chengdu! | photo: Lennart Ootes

Top seed Yu Yangyi was held by Malaysia’s Li Tian Yeoh, Adhiban could make no headway against Van Huy Nguyen and, most notably, Vidit used up a number of his nine lives to escape against China’s Liu Guanchu. 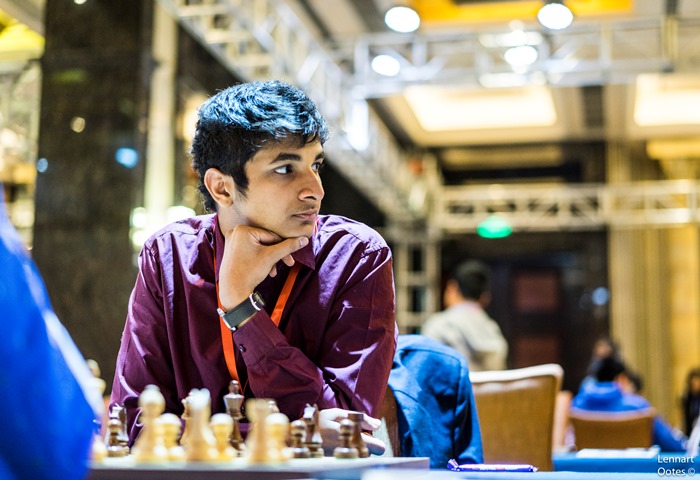 Vidit had been pressing hard for a win, but his edge was all but gone when he played 45…Rb8?

This was the first chance for White to play 46.Rxd5! exd5 47.Rc6! That threatens mate on h6, but the real killer is Rf6, when Black can’t avoid facing four connected passed pawns. Liu Guanchu missed his first chance with 46.Rc6?, but was able to play the sacrifice two moves later. Things were balanced on a knife edge:

Instead Liu Guanchu stopped the pawn with 51.Rd7?, but after 51…d2! 52.Rxd2 Bxf5 Black looked to be surviving again. Vidit did survive, but if the final position that was reached on move 77 is accurate it seems he was losing! 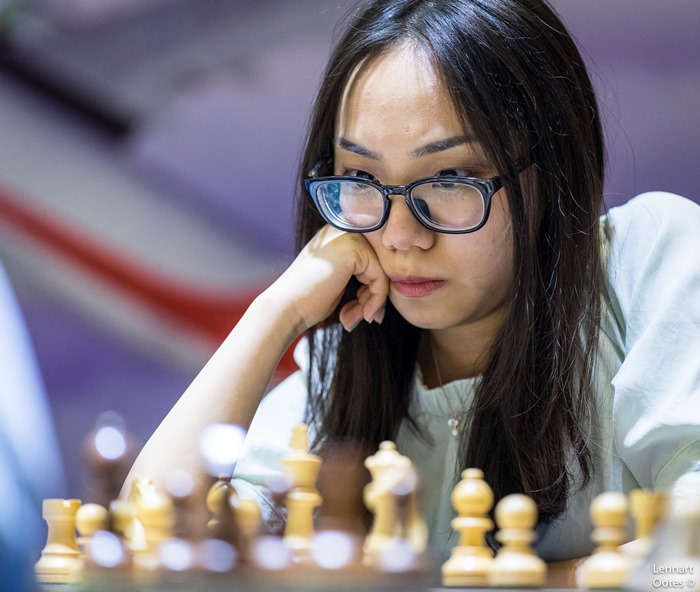 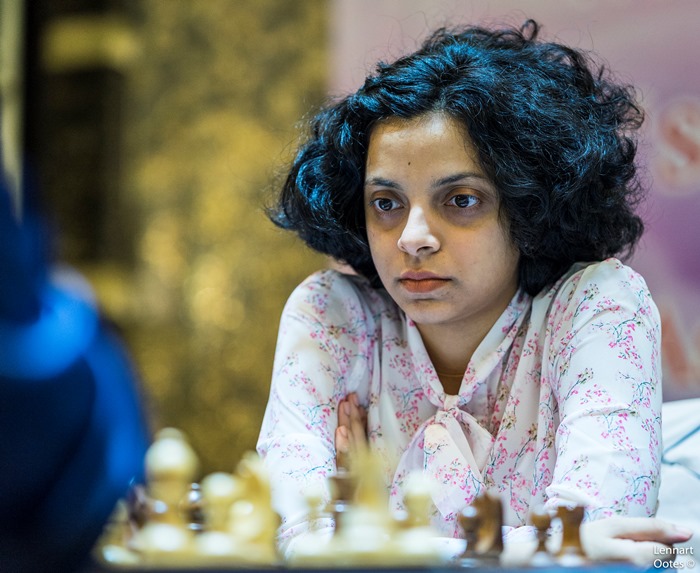 Padmini Rout got off to a tough start in Chengdu | photo: Lennart Ootes

2nd seed Sarasadat Khademalsharieh from Iran got a nice win, though she might have been unsettled when it was reported on the FIDE website that all Iranian players were being forbidden from playing in FIDE-rated events until the Iranian Chess Federation paid the money still owed for the recent Women’s World Championship in Tehran. The news story did state, at least, that currently running events were unaffected. Later the story was removed from the website, suggesting payment may have been forthcoming.

The headgear of Turkmenistan's Mahri Geldiyeva was a match for Sarasadat Khadelmahsharieh's, but the Iranian won the battle on the chessboard | photo: Lennart Ootes

In Round 2 Wei Yi is paired against Deep Sengupta, who he shared 2nd place with on 6.5/9 last year. He also shared the fact that they both lost only one game, to the 2016 Asian Champion Sethuraman. This is likely to be another year of Chinese-Indian rivalry.

Games start at 8am CEST each day and you can follow the action here on chess24: Open | Women You can also watch the games in our free apps: