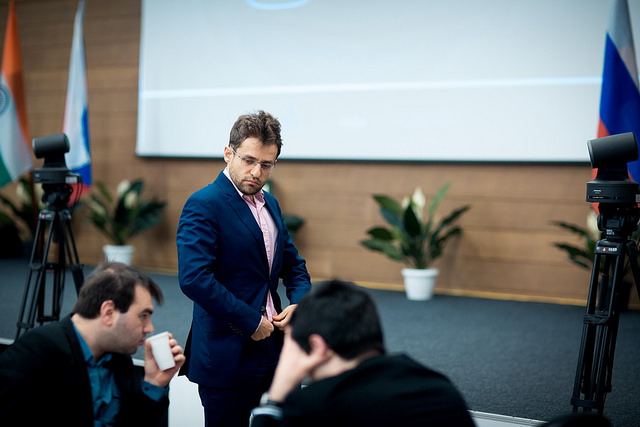 This July world no. 2 Levon Aronian will participate in a chess summer camp in California. In the run-up to the event the organisers interviewed him about his own chess development when he was a talented child growing up in Armenia. He talks about how he initially preferred playing draughts, the struggle for sponsorship and what he enjoys most about modern chess.

There are few more interesting interview subjects than Aronian. We recently brought you an interview where he revealed what went wrong in the Candidates Tournament and gave his predictions for the upcoming Anand-Carlsen match. In another he made the surprising admission that he never expected World Champion Magnus Carlsen to become a top player. In that same interview he explained why he’s planning to travel to America this summer:

My friends were always asking me, but I didn’t have the opportunity. Now I’ve got time. We’re going to organise a training camp for American children just as we’re doing now in Armenia. That camp for US children will involve the trainers Melik Khachiyan – my first trainer, and Andranik Matikozyan. We’ll work a bit with the children and meet up as old friends from the 1990s. We shared a lot together, but now we meet up in different countries.

We received the following press release from the event's organisers:

As a prelude to the upcoming MetroChess & ACA Summer Chess Camp, headlined by lead instructor Levon Aronian, we interviewed Levon about playing chess in his childhood, as well as his road to becoming a professional chess player. His answers were, as usual, honest and genuine, and provide valuable insight into the life of one of the strongest and most creative chess players today.


1) Can you tell us what it was like to learn chess in your youth? What did you like about the game? Did you have any early ambitions to become #1 in Armenia, or the World Champion?

When I was 4 or 5 years old, my maternal grandpa tried to show me the game of chess, but I was more fascinated by the game of draughts (checkers) back then and I used to terrorize every guest that would visit my family by pestering them to play a game of draughts with me. My chess playing started when my sister re-introduced me to the game when I was about 9, and then it took off from there. My favorite thing in chess was that in comparison with draughts there was a big goal - the king! So from an early age I always went for risky, attacking options. I always had the feeling that I was a very good player from my earliest days. It's hard to say what my ambition or goal was back then, but whenever I got to beat everybody in my chess class, I wanted to play better opponents, and so on.

2) Did you attend any chess camps as a child, or group training sessions, or did you mostly train privately?

I was very lucky to have a great trainer staying at my house. Training with a then-strong IM Melik Khachiyan allowed me to blossom immediately, and I won my first Junior Championship of Armenia after just one year of getting to know the rules of the game. I visited one camp in my life and it was in Podolsk, Russia with the Petrosian Chess School when I was about 11 years old. There I met many of my future opponents, and trained under the guidance of famous chess trainers such as Alexander Nikitin and Aleksander Vaisman, and got to see Garry Kasparov himself who gave lectures for 2 days!

3) At what age did you begin to take chess seriously, and when did you first consider yourself a “professional chess player”?

Since I grew up in a very turbulent time, taking myself seriously was the only way. After the fall of the USSR most scientists became jobless, and since my parents were in science, my early success in chess became the light for my family. It might sound strange, but my professional career started at the age of 10, when, with my mother's continuous efforts of knocking on every high ranked official's door, I got my first sponsorship deal.

4) In 1994 you won the World Youth Championship U12, and in 2002 you became the World Junior Champion – how important were these victories to you? How did you deal with the pressure of the final rounds in those events?

Winning tournaments in my early years was vital for me and my family. Good results enabled me to find new sponsors, and without them I think I would never have become the player that I am. Pressure is always there; but playing in Armenia where everyone is a fighter made me skilled in last round situations.

5) Was there a particular moment in your career when you felt your personal chess “style” was developing?

I want to believe that I am still developing and I welcome new challenges. I do feel that most of the things I love in chess come from 3 people - Melikset Khachiyan, Arshak Petrosian, and Gabriel Sargissian. 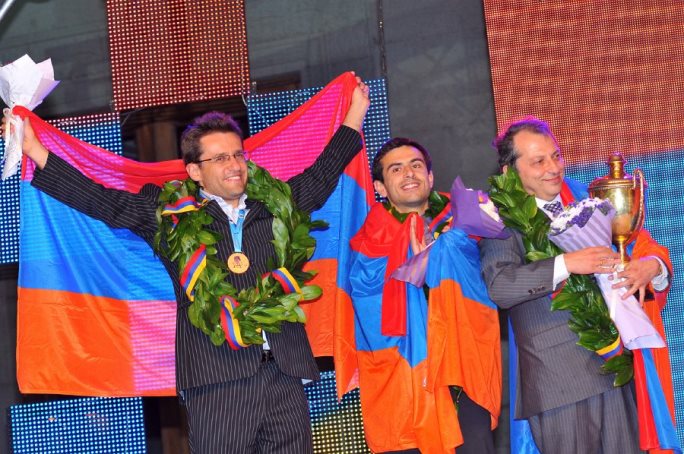 6) Is there a particular part or subject of the game you enjoy studying? (openings, middlegames, endgames, tactical combinations, etc.)


I really enjoy finding new ideas in the early stages of the game. The biggest joy in the modern chess era is the discovery of good moves that are not approved by the computer.

7) Can you name some of your favorite chess books growing up, or current favorites?

I absolutely adore “Attack with Mikhail Tal”, by Mikhail Tal & Iakov Damsky, as well as Petrosian's and Larsen’s annotated game collections. I love it when the book consists of light analysis but plenty of words describing the subtle psychological details.

8) In your view what is the main benefit of learning chess during childhood?

Chess can teach a person to appreciate beauty in things that are not visibly beautiful at first sight. In chess you need to dig deep to see the true meaning of some moves. Another thing I learned from chess is patience. Before you react, you need to understand the situation.

9) Is there any advice you can give to young developing chess players?

I think it's important to be good at tactics and calculation. Those skills you can develop by yourself, and for strategy you will need an experienced guide. The best thing that Melik did for me was to force me to solve and play blindfold chess - it helped my calculation and imagination.