Levon Aronian could afford to miss mate-in-1 on the way to beating Ian Nepomniachtchi 14:11 to set up a Speed Chess Championship quarterfinal against Maxime Vachier-Lagrave. Nepo was the favourite on paper, but led only once, after Game 2, and was trailing by a single point after both the 5-minute and 3-minute sections. A comeback at the very end briefly seemed possible, but it was Levon who deservedly goes through to the next round. 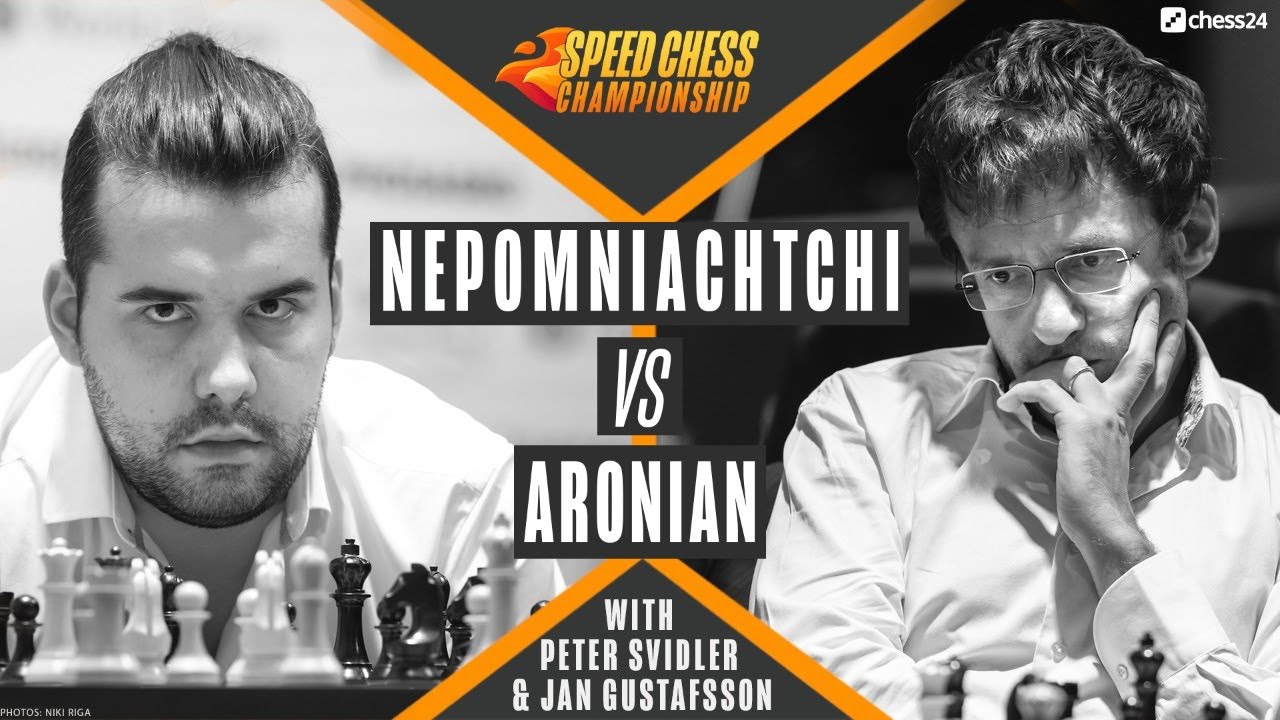 You can replay all the games from the Speed Chess Championship match between Aronian and Nepomniachtchi on chess.com using the selector below.

Peter Svidler joined Jan Gustafsson to commentate on the action, and you can replay their commentary below.

The high point of the match for Russia’s world no. 4 Ian Nepomniachtchi came early on. He took the lead for the one and only time after Game 2, where he played the spectacular sacrifice 27…Rxc3+!

After 28.Kb1 the glorious follow-up would have been 28…Qxa2+! 29.Kxa2 Bxb3+! and black mates in 2 moves wherever the white king goes. Nepo’s 28…Ra8 was also a fine move, however, and he won without difficulty, even if the computer points out one brief moment where White could have survived.

Levon levelled the scores in spectacular style, however, spotting a killer blow (Ian also spotted it, but too late to avert disaster).

31…Ne5! and White’s position fell apart. After 32.Qe3 Rxc1 33.Qxe5+ f6 White was not just down an exchange but had an exposed king. Normally you would say the rest of the game was of no interest, but Levon’s chosen finish with 56…Rf3+! was a nice moment, forcing an easily won pawn ending – or in fact instant resignation!

The Armenian no. 1 had the wind in his sails and went on to win Games 4 and 6 as well to open up a 2-point lead.

Nepo hit back to narrow the gap to one point before a wild final 5-minute game ended in a draw, with Aronian leading 4.5:3.5 going into the 3-minute games. Wins were traded, until Levon opened up a 2-point lead again in the 4th 3-minute game, a real crush. Nepo’s French had gone wrong by move 7, while 14.Nd6! made it clear it wasn’t going to be his game.

It looked like Levon was cruising, but suddenly Nepo won two games in a row to level the scores. The first collapsed for Levon in time trouble.

Then Levon spoilt a winning position and blundered at the end in the next. With the 1-minute games fast approaching it seemed as though the momentum had shifted Ian’s way, but Levon went on to win the final 3-minute game to regain a 1-point lead.

All eight 1-minute games would be decisive, with the most memorable the fourth. Ian would have been winning if he played 46.Qe3 but instead he went for 46.Qd3??


That meant a 3-point lead and Levon opened up a 4-point lead in the next game with around 8 minutes to go. If that wasn’t mathematically match over it looked like Game 6 would seal the deal, especially when Aronian spotted some nice tactics with 20…h6! that impressed Peter Svidler.

In the end, however, Levon stumbled into mate and the gap was down to 3 points. Ian also won the next game, and although time was running out we were looking at a potential repeat of the Firouzja-Fedoseev match where Alireza had forced a playoff despite trailing by 2 points with 2 minutes to go. All it needed was for Nepo to win Game 8, with any time left on the clock, and he’d be able to start a must-win final game.

An incredibly messy game followed with brief winning chances for Nepo, but in the end it was Levon Aronian who held his nerve to win both the game and the match convincingly.

Things aren’t going to get any easier now for Levon, who faces his friend and rival Maxime Vachier-Lagrave in the quarterfinals. Among their memorable matches are two clashes in the World Cup. In 2017 Levon won their semi-final in a tiebreak that went all the way to Armageddon, while Maxime got some revenge in 2019 by winning their quarterfinal.

Next up is top seed Hikaru Nakamura taking on bottom seed, and Levon’s compatriot, Haik Martirosyan. It’s likely to be a tough day at the office for the 20-year-old, but you can again watch all the action here on chess24 from 18:00 CET on Thursday.