As the World Championship match in Sochi reaches its climax another top chess event is about to start. American no. 1 Hikaru Nakamura will take on world no. 4 Levon Aronian for the lion’s share of a $100,000 prize fund. The five-day Showdown in St. Louis has a unique format: first four classical games and then a 16-game blitz session on the final day, with one classical win worth four in blitz. All the action will be streamed live with the tried and tested commentary team of GM Yasser Seirawan, WGM Jennifer Shahade and GM Maurice Ashley.

What can we expect from the encounter between the two World Championship hopefuls? First and foremost – exciting chess! Both players are known for being among the most aggressive and creative players around. Aronian has long been rated higher than Nakamura, but the American is five years younger, has been closing the gap and, in blitz, actually outrates 2010 World Blitz Champion Aronian by 56 points: 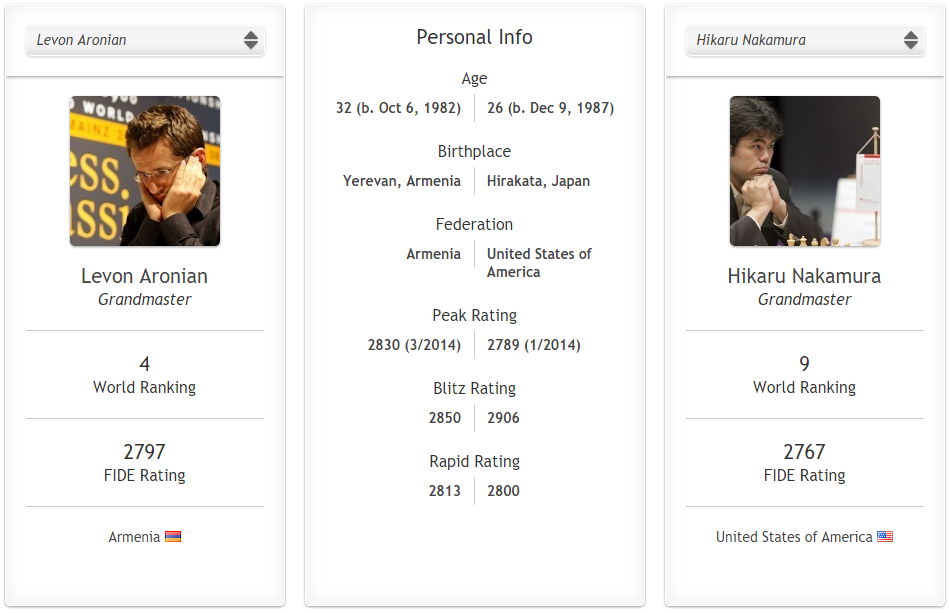 In terms of results the divide between slow and fast chess is also evident. Overall Aronian is ahead in classical chess with 9 wins (including in Zurich and Wijk aan Zee this year), 9 draws and 4 losses. In faster games the overall record is also in Aronian’s favour, but this year Nakamura has won twice in Zurich (rapid and blitz) and in the World Blitz Championship. Aronian claimed one win in the World Rapid Championship.

It may also work in Nakamura’s favour that he once played a 40-game private blitz match against none other than Magnus Carlsen.


In an interview with St. Louis Public Radio Nakamura made it very clear both players were taking the match seriously:

This certainly isn’t a match that is as long as, say, the World Championship match, but nevertheless, the main purpose of this Showdown is to get more match experience. It’s still very important - nothing less than a very serious match for very serious prizes.

So we shouldn’t consider the Showdown in St. Louis a “friendly?”

We’re certainly not friends. At this level, you just can’t be very friendly with most of your opponents - it’s not like we’re sharing tips or discussing chess or even having general conversations. Now, I’d say we’re definitely on friendly terms, it’s not like we hate each other. Though there are certainly other players that I definitely don’t like.

Of most of the top players, Levon is probably one of the most friendly people in general - we certainly don’t have any animosity. So while I think we’ll be on good terms, and probably more friendly than a match featuring me and (Magnus) Carlsen, this is still going to be very combative.

What kind of player is Aronian?

I’ve known Levon for many years, the first time we played was way back in 2005 in Gibraltar, and I’ve seen him play in many tournaments over the years. He’s a very strong player, very talented, consistently the No. 2 player in the world for the last two or three years. Any time someone gets to the top-10 in chess, you have to respect their game no matter what.

Later in the interview Nakamura simply states: “My goal is to become World Champion.” That applies to both players, and should make for a fascinating encounter.

To get you in the mood here's the blitz game from Zurich!