Vishy Anand described Arjun Erigaisi’s calculation as “simply superlative” as the 18-year-old Indian star escaped with a draw against Levon Aronian and won the Tata Steel Chess India Rapid by a full point. Arjun revealed afterwards that he’s been working with Fabiano Caruana’s long-term coach Rustam Kasimdzhanov. Overall it was a nervous last day, with Levon spoiling a winning position in that game, and against Vaishali, while Praggnanandhaa and Vidit also failed to fire on all cylinders as they tied for 2nd place. 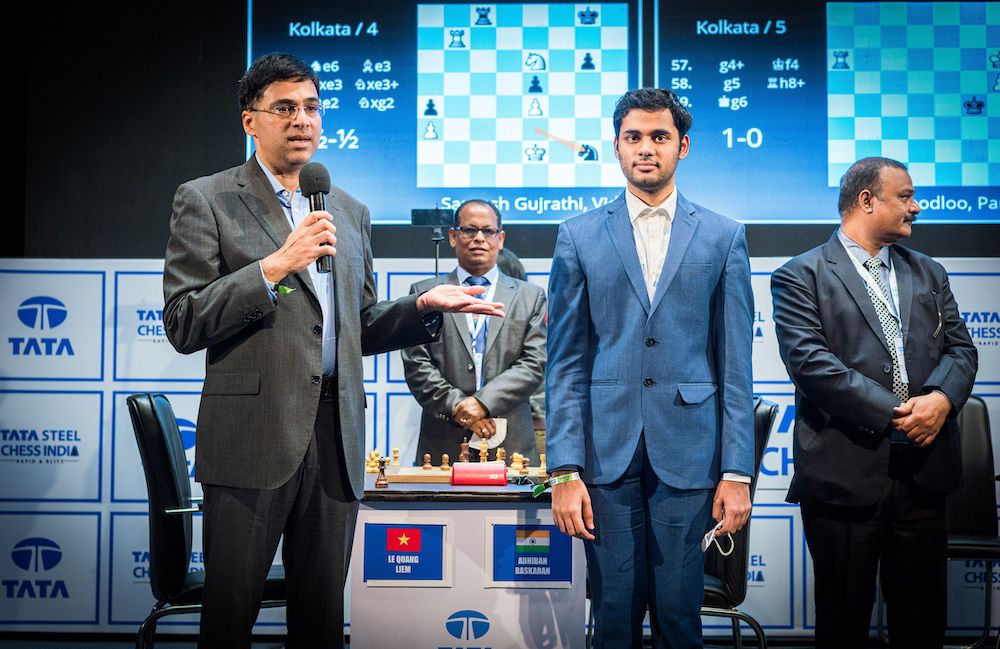 Arjun Erigaisi said after his victory in the Tata Steel Chess India Rapid:

When I came to the tournament I had no expectations. I just wanted to play my best and enjoy. By the end of Day 2 I started to think about the standings.

He had every reason, since scoring a perfect 3/3 on Day 2 had catapulted him into a full point lead over Levon Aronian and Praggnanandhaa, with Vidit a further half point back. The final day was always going to be tougher, but when it was over Arjun was still a point clear of the pack — you can click any game in the table below to open it with computer analysis, or hover over a player's name to see all his or her results.

In fact none of the contenders for the top prize would shine on the final day, with Vidit picking up the only win among them.

Arjun started off with a draw against Adhiban, but admitted it had been a close call. He said he’d completely overlooked Adhiban’s 39.Ra4! and things might have gone differently if Adhiban had chosen another option on move 42.

Instead after 42.Kc3? Rh2 43.g5 Rxh3 44.g6 Rg3 the game immediately fizzled out into a draw. No harm was done for Arjun, however, since Levon Aronian and Praggnanandhaa only drew, while Vidit’s win over Vaishali only took him within a point. 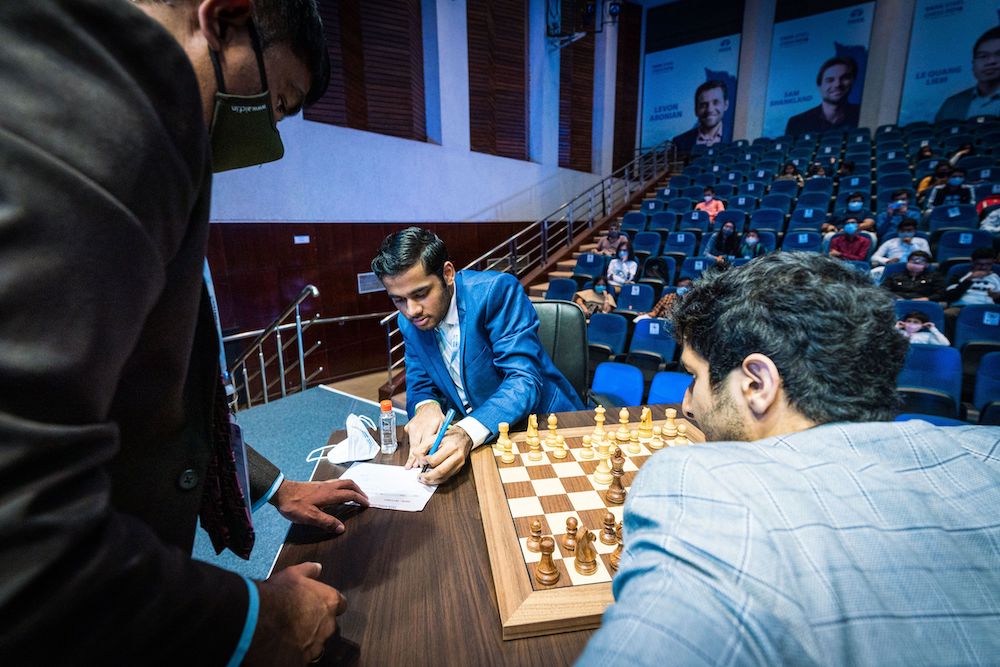 Arjun-Vidit was Vidit’s chance to strike a blow for victory, but instead he accepted a 12-move draw. “I thought it made sense to take a rest and be prepared for the next”, said Arjun, and when Levon drew against Vaishali it looked like a good decision. The Armenian was on top in around 15 moves and had some great chances to seal the deal. 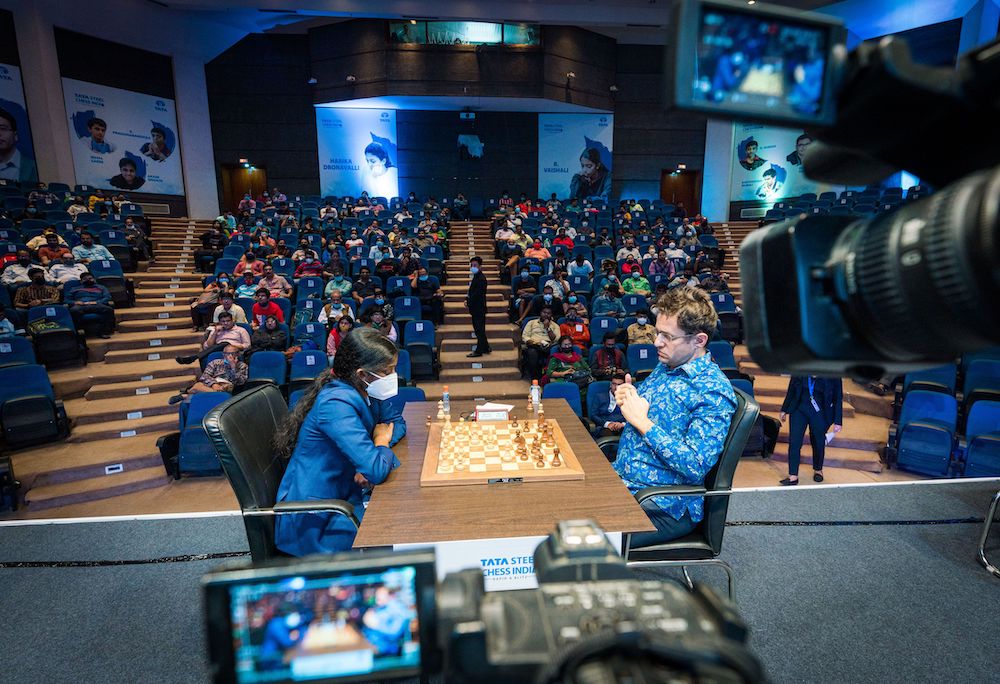 Vaishali inevitably had a tough tournament, but she held the world no. 4 to a draw! | photo: Lennart Ootes, official website

The path Levon chose with 32…Qc5?! 33.Rf1 d5?! was objectively a mistake, but also seemed likely to work given Vaishali was down to a minute to his 9. The 20-year-old Indian star put up great resistance, however, and when Levon missed a chance to trade down into a winning queen endgame it was suddenly very hard to win. By the end it was even Levon who had to force a draw in 66 moves.

That was a tough game for the world no. 4, but in the bigger picture it didn’t change too much. He still knew that for first place he had to beat Arjun Erigaisi in the final round— in which case there would have been a playoff, as Vishy Anand explained afterwards, much to Arjun and the commentators’ surprise! The head-to-head and other tiebreakers would only come into play if there was a three or more way tie for first place, when only the top two would play the playoff. 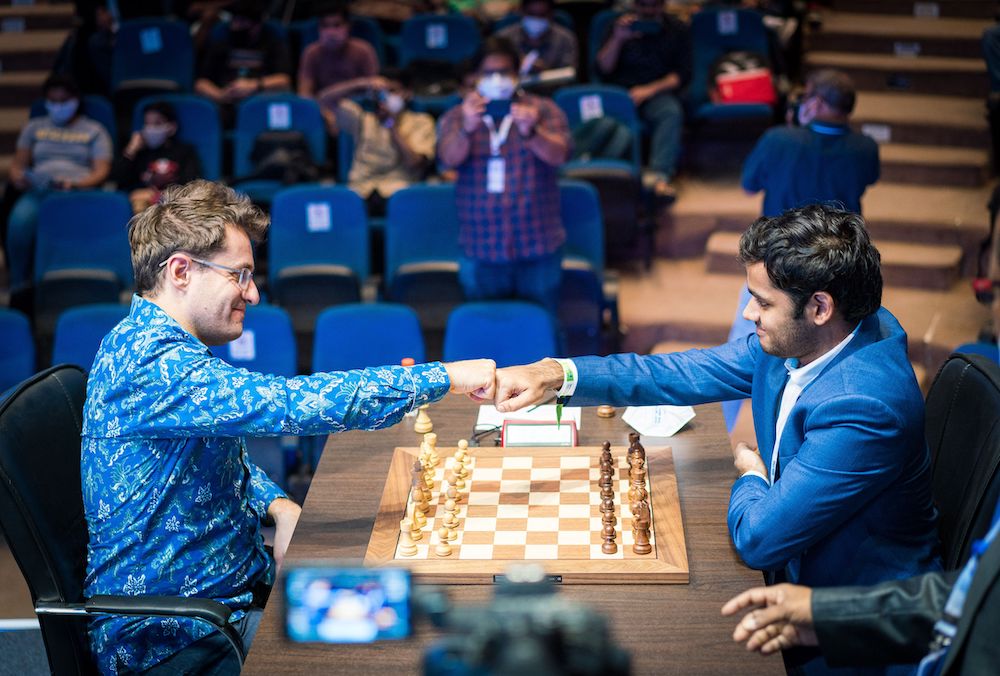 It all came down to Aronian-Erigaisi in the final round | photo: Lennart Ootes, official website

So Arjun didn’t know he’d have a second chance, but he knew that a draw would give him the title. Playing for a draw can be very tough, however, and although his Petroff opening started off ok it had all gone wrong by the time he tried to simplify with 18…d4? only to run into 19.Rad1! Ne6.

Here he admitted afterwards that he’d simply missed Levon’s 20.Bxd4! Nxd4 21.Qe3! pinning and winning back the piece. That left Levon with an extra pawn and what should have been an overwhelming advantage. 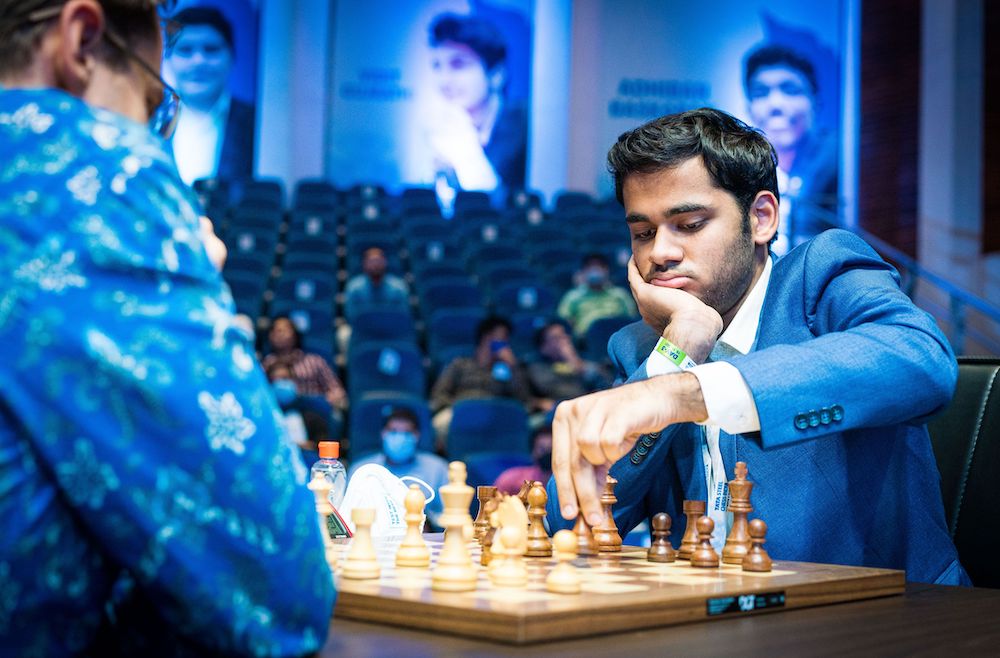 Levon’s conversion of winning positions had been malfunctioning for two days in a row, however, and once again he let things slip. 37.Bc4!? was spectacular, but it simply wasn’t working against the best response.

But it turned out the 18-year-old had everything worked out, as he blitzed out the saving 41…Qf3!, threatening mate-in-1 with Qh1# and covering the f7-square. After 42.Bxf7+ Qxf7 43.Qd8+ Qf8 44.Qc7 Arjun gave perpetual check starting with 44…Qf1+ and, after coming so close in the Lindores Abbey Blitz, he’d won the top prize in Kolkata. 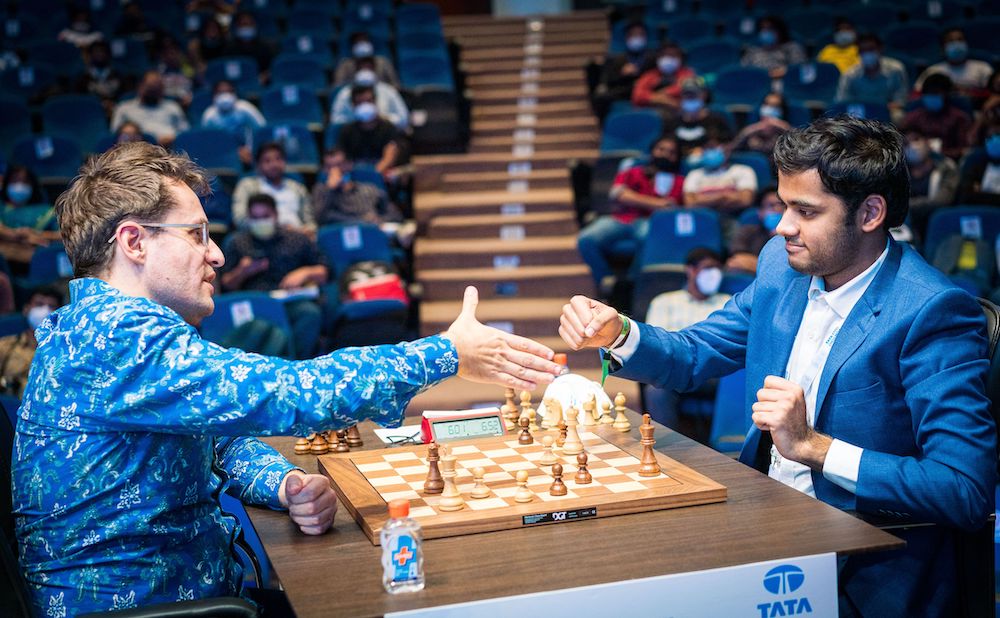 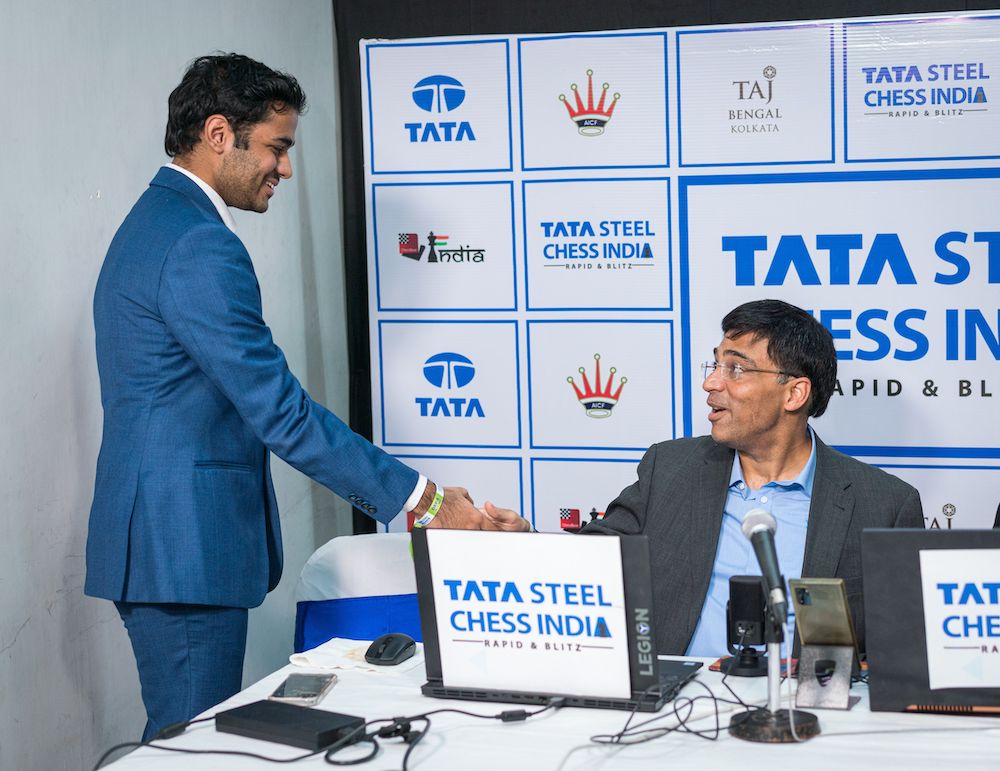 Vishy Anand was among the first to offer his congratulations | photo: Lennart Ootes, official website

Vishy Anand singled out that last calculation when explaining what makes Erigaisi so good:

Good openings and very good follow-up, and he’s very sharp tactically. These kinds of moves like Qf3, he spots them at the end, so I think when he goes for long variations he sees the last move, these little hidden tricks, and it makes a difference, because it’s enough to see 99% of the stuff, but if you don’t see the point, then you reject the move one move earlier and you look elsewhere. Choosing the right move is often a function of seeing the final move of a variation, not the first move. Many people can see the first move, and many people can almost see the end, but my feeling is his calculation is simply superlative, and that’ll be one of the biggest skills to build on.

Arjun had promised to reveal who he’d been working with lately after the event was over, and it turned out it was none other than Fabiano Caruana’s long-term coach, and a World Championship second for Vishy Anand, Rustam Kasimdzhanov.

Vishy had helped encourage what has already been a fruitful partnership:

Rustam asked me and I told him, yes, great kid, one of our best, and we kind of had this chat in Tashkent. 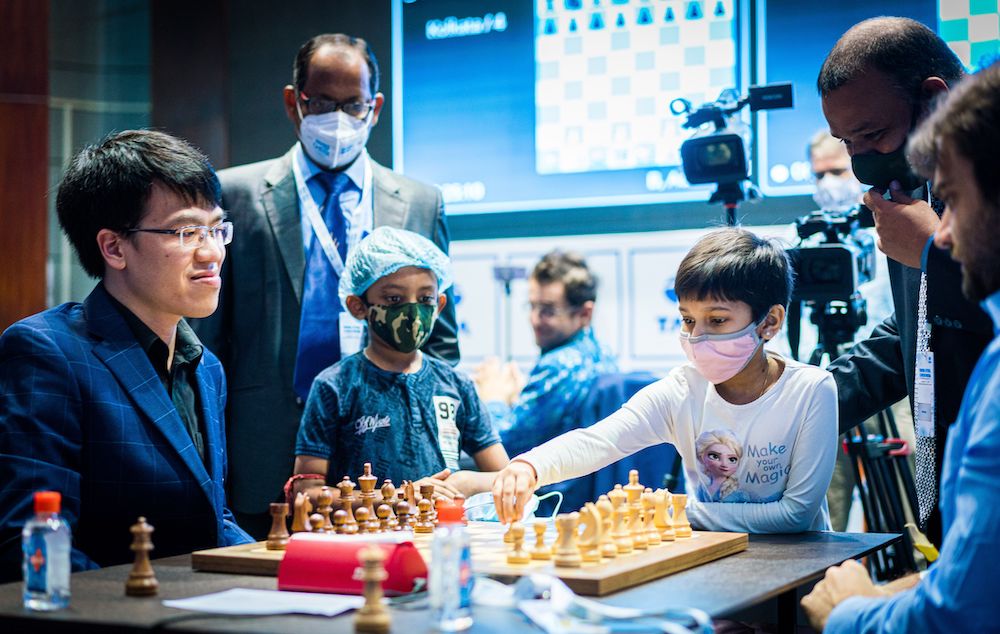 Liem Quang Le and Sam Shankland didn't have too much to celebrate, but they'll get another chance in the blitz | photo: Lennart Ootes, official website

The only problem with the revelation was that it turned out a few minutes later that Arjun’s event wasn’t over and he was going to get a chance to play the Blitz as well! Adhiban had to pull out.

Needless to say, Arjun will be a force to be reckoned with in the blitz, where Nihal Sarin, Raunak Sadhwani, Harika Dronavalli and Gukesh are joining in place of Praggnanandhaa, Vaishali and Karthikeyan. We’ve got 18 rounds of 3+2 blitz starting Saturday. 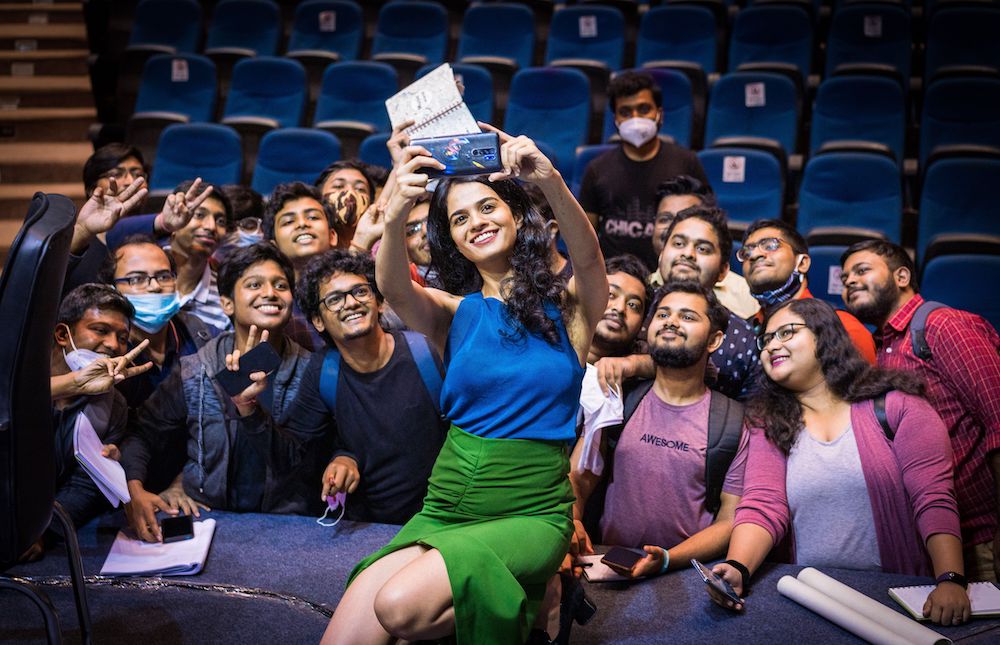 Tania Sachdev will again be commentating, before she heads to Dubai to report for chess24 during the World Championship match | photo: Lennart Ootes, official website