18-year-old Arjun Erigaisi’s late emergence as one of the very top Indian chess talents continues as he won all three games on Day 2 of the Tata Steel Chess India Rapid to overtake Levon Aronian as the sole leader. Levon, after a perfect first day, looked to be powering to 4/4 until he stumbled and lost to Liem Quang Le, before drawing the next two games. Arjun took full advantage as he beat Vaishali, Le, and then Sam Shankland in just 19 moves. 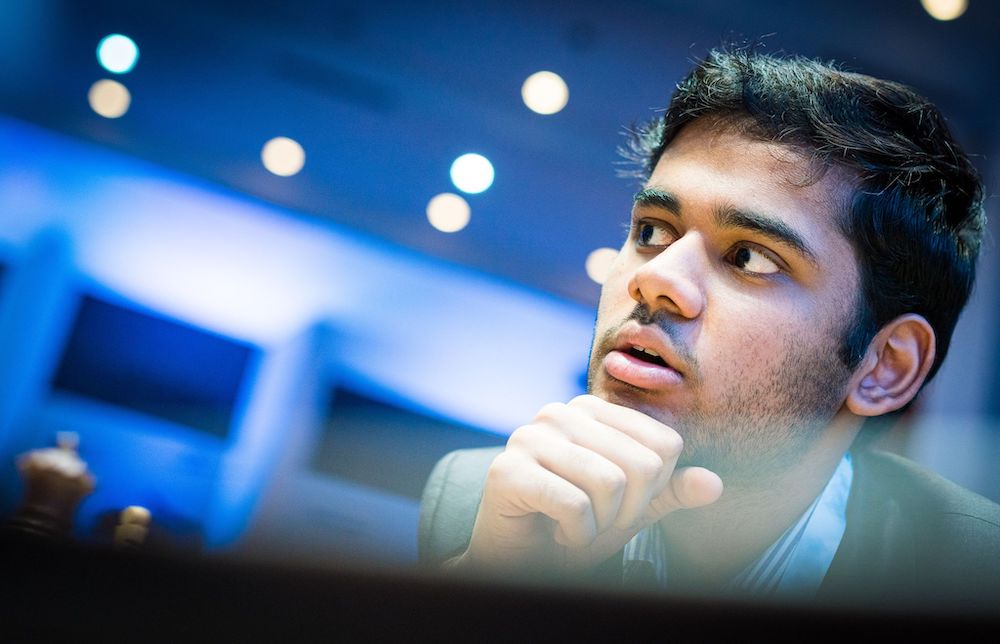 Just when it seemed clear who the huge stars of Indian chess were going to be, Arjun Erigaisi appeared on the scene | photo: Lennart Ootes, official website

You can replay all the games from the Tata Steel Chess India Rapid using the selector below.

Arjun Erigaisi became a grandmaster as a 14-year-old in 2018, but the first time he appeared on the radar for many international chess fans was during the Indian Qualifier for the Meltwater Champions Chess Tour. In the first match one his coaches, Srinath Narayanan, described him as being “as good as any of the juniors”.

Those words were borne out in action as Arjun went on to defeat established stars Nihal Sarin, Gukesh and Adhiban to win the qualifier.

That result gave Erigaisi a place in the Goldmoney Asian Rapid line-up, and in his debut on the Tour he became the first Indian player to qualify from the preliminaries, as he finished in 8th place out of 16 players, edging out Alireza Firouzja. He then pushed Levon Aronian all the way in the quarterfinals, drawing their two rapid matches 2:2, before Levon managed to win the tiebreak. Levon would go on to defeat Magnus Carlsen in semi-final tiebreaks before winning the whole event.

Then recently Arjun had a relatively modest result in the Grand Swiss, finishing on 50%, but followed it up by starting with a stunning 9/9 (and 10.5/11) before finally ending the Lindores Abbey Blitz in 2nd place. 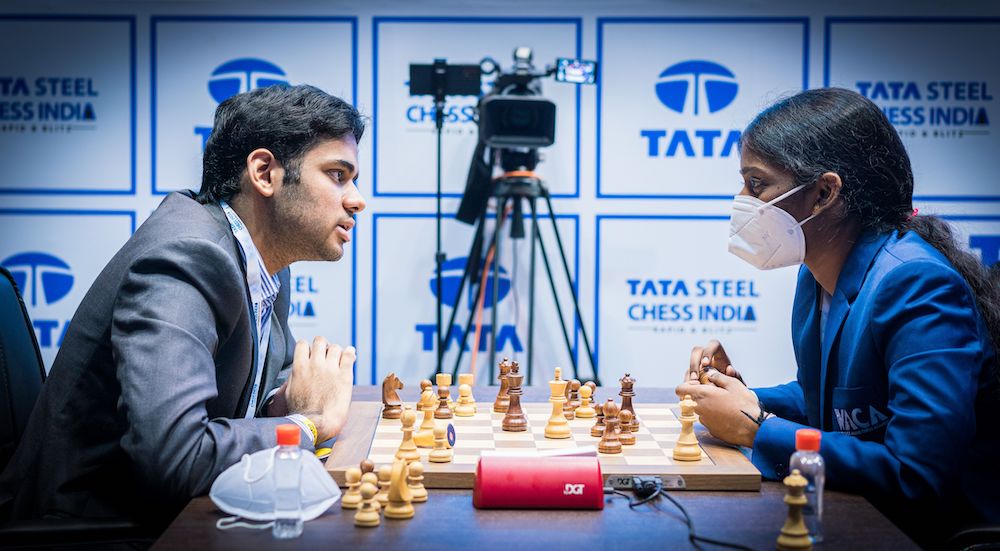 The Tata Steel Chess India Rapid has been a chance for Arjun to shine on home soil against some of the world’s best and most promising players, and he’s once again taken full advantage.

A curiosity is that it could have been better, since the defeat on Day 1, after a very hard-fought battle, featured an illegal move.

Here Praggnanandhaa tried to castle, which would be an excellent move… if he hadn’t already moved his king three times — to d2, d1 and back to e1! In the end 23.Rc5! was played and Arjun got some time added to his clock, but he noted on Day 2 that Pragg told him that evening that he could have demanded that the king be moved after it was touched. After 23.Kd1 Bc6! White is in trouble.

In any case, things went almost perfectly for Erigaisi on Day 2. Against Vaishali he played a rare 3…Nge7!? against the Ruy Lopez and managed to grind out a win in a rook and then queen endgame. Then against Liem Quang Le he whipped up an attack with limited resources by pushing his f and e-pawns. Liem helped out by blundering, thinking the weakness of White’s back rank allowed him to give up a pawn on c7. 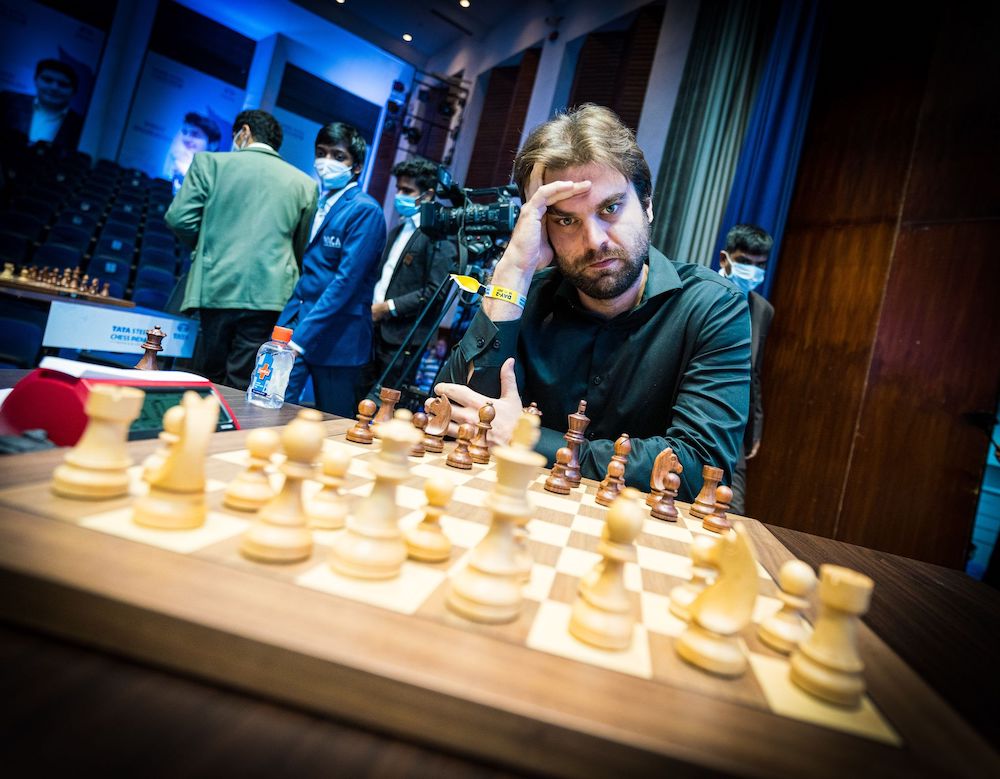 It was a tough end to the day for Sam Shankland | photo: Lennart Ootes, official website

For a second day in a row Arjun then won a miniature in the third game, this time against Sam Shankland, who collapsed in the following position.

12…Bxe5? was a losing blunder, with Arjun assuming that after 13.dxe5 Sam’s original plan had been to play 13…Nc5?, before he realised that 14.Bxh7+! was a Greek Gift sacrifice that would have led to checkmate.

After 13…g6 Arjun had time to castle short, before attacking in the most clinical manner, with 18.g4! Ng7 19.Qh6! ending the game.

Ng5 and mate on h7 is the main threat, and if Black moves his f-pawn then exf6 is a double attack on g7 and the queen on c7.

So it was a perfect day for Arjun, but he must still have been surprised to have gone from trailing the leader by a point to leading by a point. That was down to the struggles of Levon Aronian, who looked all set to reach 4/4 in real style, when things suddenly fell apart against Liem Quang Le.

Levon had done everything right, but was perhaps unfortunate that there was no easy kill on offer despite his pieces and pawns swarming around the white king. The subtle 40…Be7! and 40…c6! are the computer’s suggestions here to avoid a draw by repetition with 40…Qe2+, but Levon tried 40…Ng1, threatening h3 and checkmate to follow. The problem, however, was that Liem got to play 41.h3! himself and was suddenly no worse.

Levon then missed an only move to draw (44…Qe1!) and suddenly found himself lost.

Levon won a pawn against Parham Maghsoodloo in the next round, but couldn’t squeeze out a win in 80 moves, while his opening against Praggnanandhaa in the final round didn’t inspire confidence.

Pragg didn’t find the best continuation when queens were exchanged, however, and the game fizzled out into a 29-move draw, leaving Levon unbeaten and with chances on the final day — he plays Erigaisi in the final round! 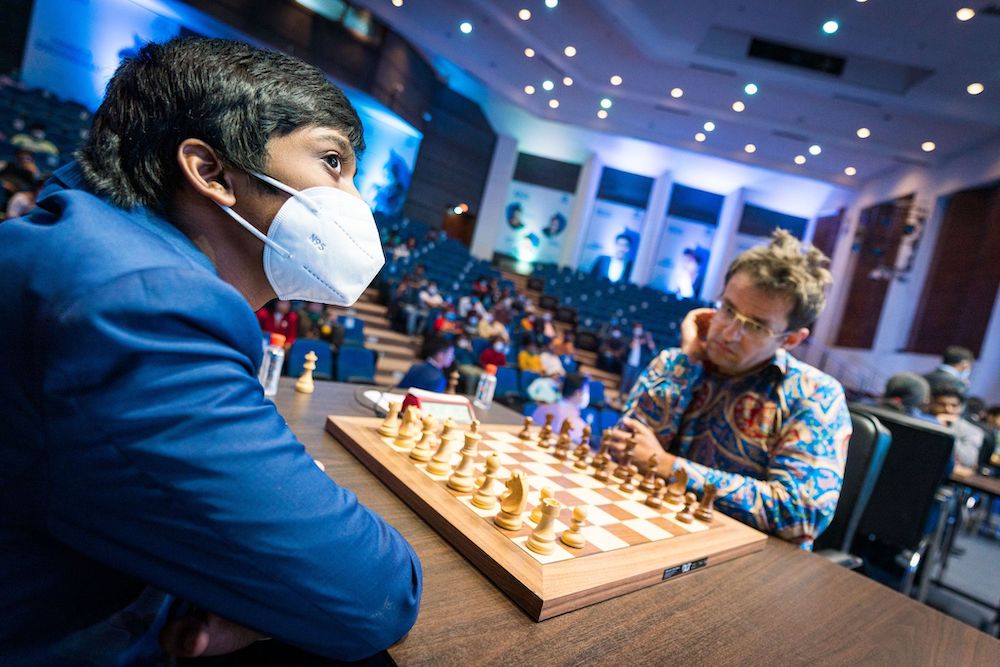 Praggnanandhaa is level with Aronian after they drew their game | photo: Lennart Ootes, official website

Praggnanandhaa is level with Aronian in second place, after two draws and a beautiful win against Adhiban to start the day. At first Pragg surprisingly missed a great chance.

Black is busted, with the d6-bishop defended and Rc7 and Re1 in the air, and Adhiban resigned three moves later. So far the Beast has been tamed in Kolkata. 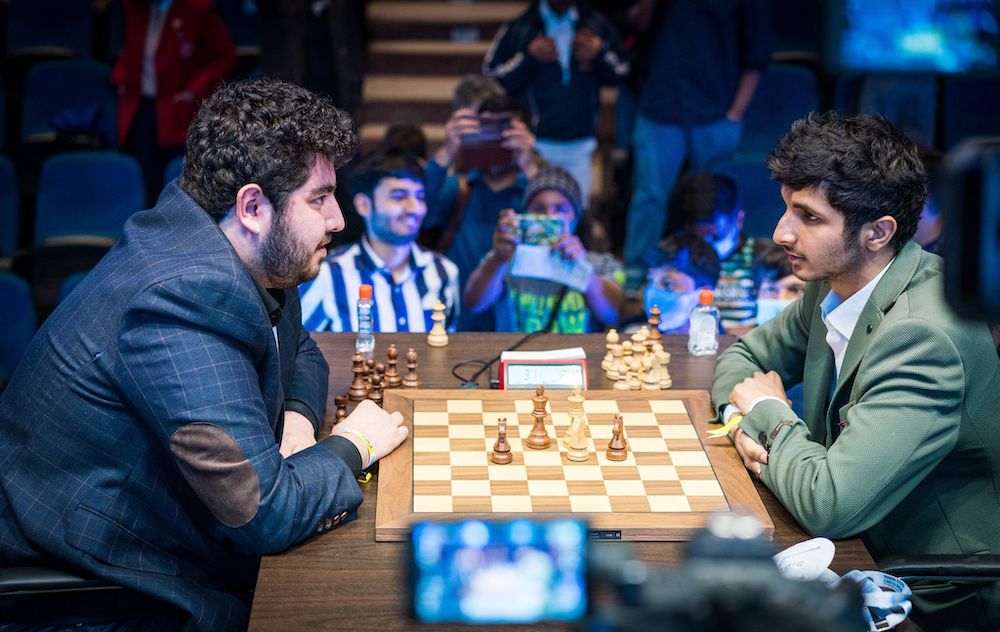 Vidit is a further half point back, after only managing three draws on Day 2 — with the first game of the day taking some time to recover from! It would eventually last 104 moves, but when Vidit came to the studio afterwards all his thoughts were on move 37.

Vidit still had winning chances later in the game, but in the end we were perhaps lucky that the game went on as long as it did — we got to witness a beautiful draw by repetition at the end, with three knights and two kings all lined up in a row.

Maghsoodloo would go on to play 80 moves against Aronian in Round 5, and after his last round game against Liem Quang Le he dropped by the commentary booth just to say that he was totally exhausted. He won that last game, but computers point out that Liem was completely winning at some points — both players had had a very eventful day! 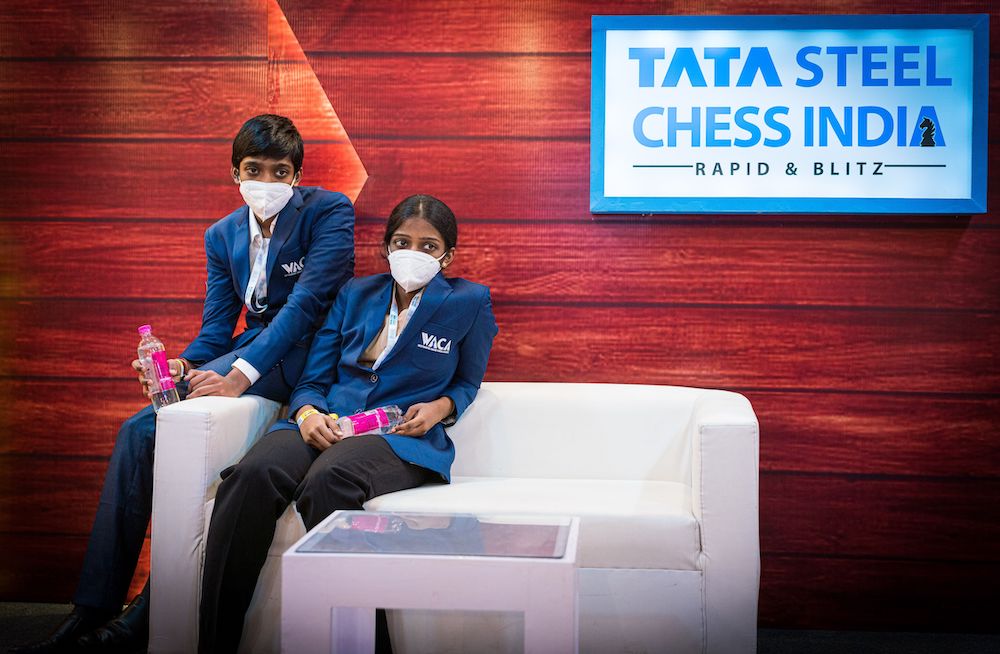 That leaves the standings as follows going into the final day of the rapid in Kolkata.

With Arjun still to face three of his toughest rivals on paper — Adhiban, Vidit and Aronian — there’s absolutely everything to play for.