When it comes to chess humor, these days it's hard to top "Dan from Minnesota", known by his Twitter and Instagram name AntonSquaredMe. He has been making Photoshop mashups of chess since the summer of 2015, but over the past six months has really upped his game, producing dozens of laugh-out-loud creations in a wide variety of styles. I decided to learn more and take a look at some of the highlights. 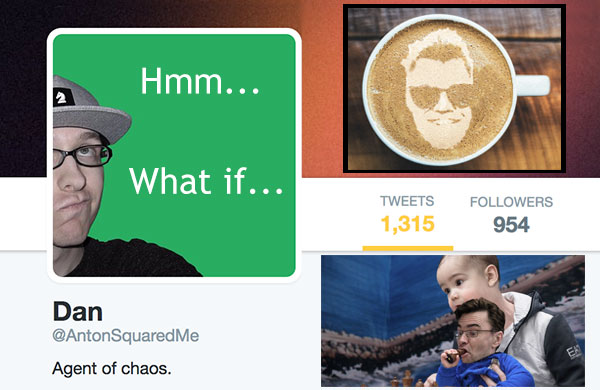 Not very original but it only seemed fair to start by Photoshopping his Twitter profile!

Macauley: What are a few of your favorite examples of your work?

Dan: I like this picture of Bobby Fischer mainly because of the response that followed. My replies and DMs [Twitter Direct Messages] were flooded with people telling me that the photo was fake! (I KNOW! I MADE IT!) That kind of response is assuredly my favorite. It's happened a handful of times and each time it does it fills me with glee. Recently, Chessbase accused me of being "fake news" and it made my day! Of course my goal isn't to fool people, it's to make people laugh. But if a few people get tricked along the way, that's just a happy bonus!

Dan: This one of Loek van Wely and his baby from Tata Steel is just so strange. There's something about a giant baby holding a tiny man that both disorients me and makes me smile! That's a good combination.

Dan: This photo of Li Chao making Drake crack up still delights me when I see it. It makes me wonder what Li Chao said to make him laugh like that! I love Drake and would die to make him laugh that hard! I know it's fake, but I'm still a tiny bit jealous.

It's really satisfying to think of something and to make that idea come alive.

Macauley: What inspired you to use chess photos as your creative canvas?

Dan: I'm not sure how I started. I learned the basics of Photoshop in high school and have been using it to make stuff ever since. It's really satisfying to think of something and to make that idea come alive in a photo. Although I should say that I fail more often than I succeed. For every picture that I tweet, there are another 2 or 3 that I don't. I have a folder full of stuff that either didn't turn out right or is just too weird. But luckily the process is fun for me. I genuinely enjoy it, even if the final image isn't what I hoped for.

Macauley: Do you have a favorite player or players?

Dan: I don't really have favorite players in the way that most people do. I haven't studied enough games to know who should be my favorites! The players that I do like, however, I usually like them for non-chess reasons. For example, I like [IM] John Bartholomew because he's always been very nice to me (and he's from my home state). I like Fiona Steil-Antoni because she makes me laugh! And even though she's essentially the busiest person in the world, she always has time to talk nonsense with me.

And I essentially like any chess player that follows me on Twitter! Haha! That's sad, but true. All of them are great chess players, but that's not why I like them. They could lose all of their chess games for the rest of their lives and I'd still think they're great. If people are nice or funny, that really goes a long way for me.

Here's a collection of some of my personal favorites:

Some of them require no explanation...

and are just delightfully silly:

Others are set up by a tagline:

There are those that tap into the cultural zeitgeist:

And some resembling a meme:

Another play on words (complete with moderately obscure chess reference):

Some are a tribute to chess figures he likes:

Many (some of the best, in fact) are just random (why is the dog called "Cucumber"!):

As for Dan himself, he's not much of a chess player:

But we certainly hope he keeps up this ever-growing collection of visual humor and commentary. We'll keep retweeting!

What are your favorites? What have I overlooked?