Anna Muzychuk scored an unbeaten 9/11 to add the ACP European Women’s Rapid Championship to the double gold she won at the Women’s World Rapid and Blitz Championship in Qatar late last year. There was a surprise collapse from Valentina Gunina, who started with 6.5/7 before losing the next three games, while Kateryna Lagno took silver and Aleksandra Goryachkina snatched bronze with an unlikely 111-move win in the final round. 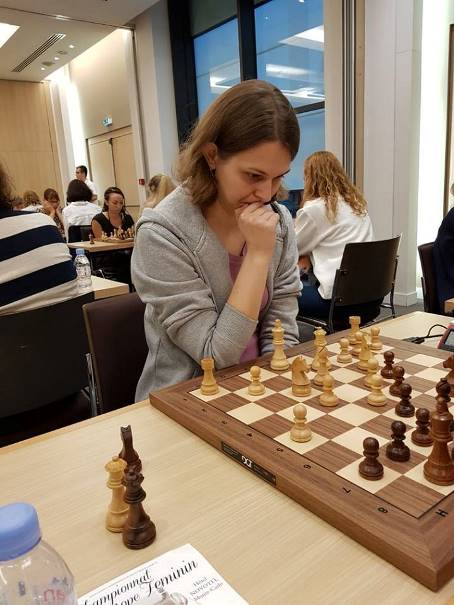 The European Women’s Rapid and Blitz Championship is taking place in Monte Carlo, Monaco from 21-23 October and has attracted almost all the top eligible players. The European ChessTV videos give a flavour of the event:

The Rapid Championship was a 2-day 11-round Swiss open, and you can play through all the games below:

Gunina soars then crashes and burns

Valentina Gunina’s 9/10 victory at the London Super Rapidplay last December was one of the greatest female performances of all time, and for 7 rounds it seemed she’d brought that form to Monaco. Her recipe was the same – play well but also extremely quickly, so that when the critical moments of the game arose she tended to have a 10-minute advantage on the clock. As in London, it worked despite her opponents being extremely strong, with Valentina preparing for the European Women’s Team Championship next week by crushing her teammates!

With her time running out Kateryna went for 33…Qf1? (33...Kh7! was necessary first) and it turned out that instead of forcing Valentina to give perpetual check she could give mate instead: 34.Qxe8+ Kh7 35.Qxf7 Rb1 36.Qxg7#


That was the only game Lagno lost, and the last game Gunina would win, since then disaster struck!

WGM Pauline Guichard is playing White and was a revelation of the event, revealing in an interview with Emil Sutovsky that she’s just qualified as a doctor and doesn’t have any time to devote to chess. In this position White is fine, but so, obviously, is Black. Gunina as usual had almost a 10-minute lead on the clock, but took the fateful decision to pick up the White a-pawn with 25…Nxa3??, running into the simple double-attack 26.Bd6! She tried to put up resistance afterwards, but never looked like altering the outcome.

That was the first of three losses in a row that put an end to Gunina's chances of a medal before the final round:

She drew the last game and finished in 13th place.

Despite being the reigning Women’s World Rapid and Blitz Champion for much of the event Anna Muzychuk admitted that she wasn’t setting the world on fire. She finished the first day on an excellent 4/5, though she was only a move away from losing to Almira Skripchenko:

Simply 45.Rc5! and Almira would queen her c-pawn (45...Kd6 46.c7!), but instead after 45.c7? Rc2 the game fizzled out into a draw. Perhaps it was poetic justice of a kind, since in the very first round Almira’s 600 points lower rated opponent Marina Sekhposjan had a +15 advantage…

40.Rxh6! is the clearest win for White, but instead there followed 40.Bf3?? Bxf3+ and White resigned before mate next move. 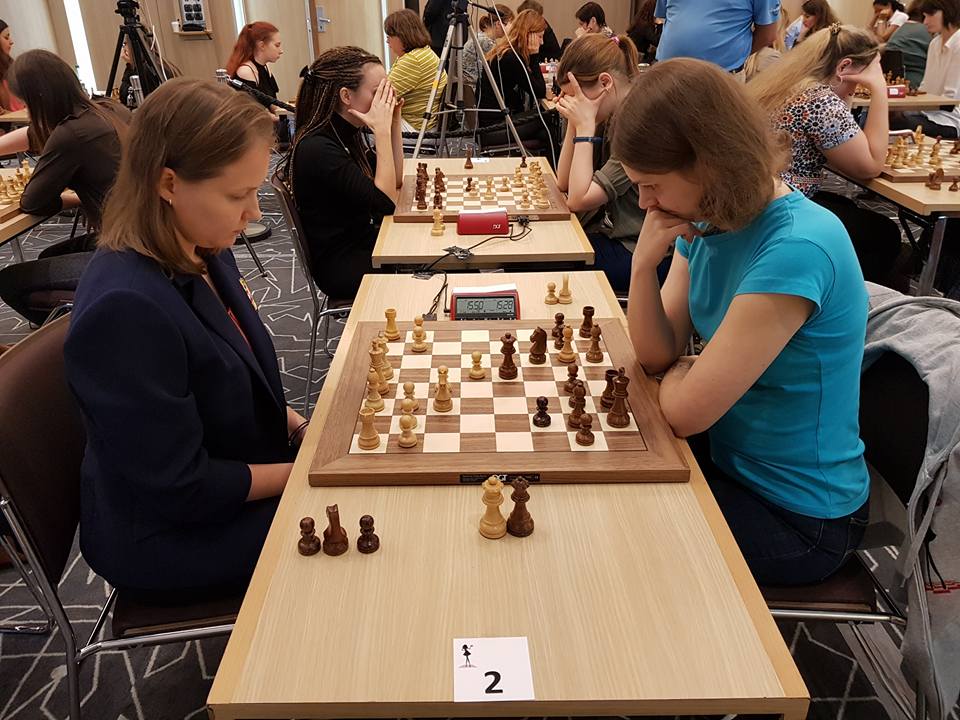 Anna got into her stride when it mattered, though, outcalculating and beating her last four opponents, who included Gunina and Goryachkina. Here Gunina with White was trying to show that the black pieces had bitten off more than they could chew (since e.g. 17…Nxa1 would run into 18.Bxf7+!, winning the queen on a3):

But simply 17…Rc8! left Black with an overwhelming advantage. Anna Muzychuk went on to win a deserved title after beating Pauline Guichard in the final round.

Watch Anna and some other players talk about their tournaments:

Kateryna Lagno was held to a draw by Alexandra Kosteniuk in the final round and had to settle for silver half a point behind the winner, while the fate of the bronze medal rested on Goryachkina-Kulon. Poland’s Klaudia Kulon had a half-point lead and could tie for third place with a draw, though a win was probably needed for a medal due to tiebreaks. 19-year-old Russian Aleksandra Goryachkina knew that only a win with White would give her chances.


In the end White was pressing, but tenacious defence kept Klaudia in the game. The logical outcome would have been a draw on move 58:

Black simply needed to pick up a pawn for the doomed rook with 58…Rxg3+!, but instead played 58…Qxc4? 59.Qxg6 and Aleksandra had every right to play on with an extra pawn. It was still drawn, but mistakes finally came on moves 104-105 and Klaudia had to resign on move 111. Persistence had paid off for Goryachkina!

The final standings at the top were as follows:

The competition continues on Monday with the European Women's Blitz Championship, a 13-round Swiss open at a 3 minutes + 2-second increment time control. Will Anna Muzychuk pull off the feat of becoming the holder of all four World and European Rapid and Blitz titles? Can Valentina Gunina bounce back? We’ll soon find out!