Dmitry Andreikin, born in the same year as Magnus Carlsen, turned 27 today. The talented Russian grandmaster’s career has followed an oddly low-profile trajectory, illustrated by his appearance in the Tata Steel Masters this year being his debut in Wijk aan Zee. In an interview with Konstantin Bazarov he talks about how it went for him and gives his impressions of his fellow grandmasters. He doesn’t, for instance, think that Wesley So has yet overtaken Magnus Carlsen.

The interview took place after the 2017 Tata Steel Masters, in which Dmitry Andreikin scored a solid but somewhat disappointing -1, with 10 draws, 2 losses and 1 win in the last round against Levon Aronian. We’ve translated most of the interview that appeared at worldofchess.ru:

Konstantin Bazarov: Did you do any special preparation for the supertournament in Wijk aan Zee? Perhaps you studied new opening tabiyas or prepared some curious variations for specific opponents?

Dmitry Andreikin: There was no specific preparation for opponents. For better or worse, tournaments at such a high level can’t boast of variety in the opening stage. For example, if I start a game with the move 1.e4 and in reply I see something other than the Berlin or the Najdorf that’s already a small surprise. And the next day I’m already myself repeating the nuances of the Berlin Endgame to play with the black pieces. Of course, having a few fresh micro-ideas in such main-line openings is very important.

One of the opening curiosities of the 2017 Tata Steel Masters was Andreikin becoming the highest rated player ever to venture 1.c3 - in his game against Harikrishna | photo: Alina l'Ami, Tata Steel Chess

How are the Wijk aan Zee line-ups put together? Did you get the chance to take part in similar tournament in the Netherlands before?

That’s a question more for the organisers. I would assume that the main selection criteria is rating, but Wijk aan Zee, in contrast to many top round-robins, is known for always having a few places for relatively “new faces”. This was my first visit to the Netherlands – it’s nice that I immediately played in the A tournament.

Dmitry, in many games you played very solidly, with a large margin of safety. Didn’t you want to take some risks and try to get your opponents into a sharper battle? In some of the games that ended in a draw were you close to winning?

A game of chess is played by two players. For example, the combinational chess players Wei Yi and Rapport preferred to go for tough defence in passive positions. In both games I had excellent practical chances. On a few occasions I missed an easy win against Van Wely, although there were some issues there in the opening.

55...Kf2! was winning here for Andreikin

In the penultimate game against Wojtaszek I think I had decent winning chances. I don’t want to talk about somehow being unlucky – converting advantages is a crucial component of chess mastery and it seems I was simply lacking there. In general, if you leave out the games with Nepomniachtchi and So then the tournament was quite a fierce and interesting battle for me. 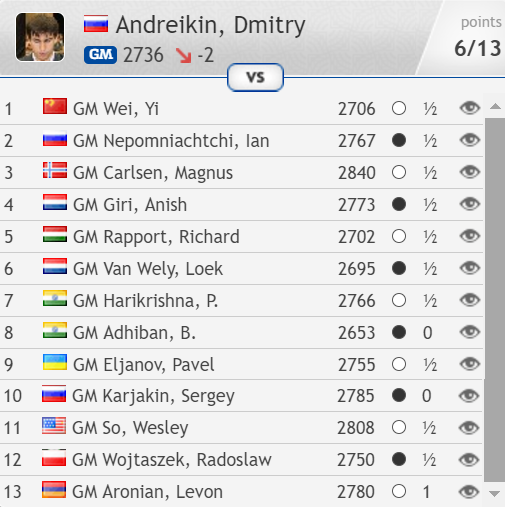 Could you comment on your encounter with Levon Aronian? Can we say that game was the best you played in Wijk aan Zee?

A win at last... in the final round against Aronian | photo: Alina l'Ami, Tata Steel Chess

Levon was motivated by the chance to fight for first place, so he played the opening in quite a risky style. I also finally wanted “to score a consolation goal” and was enthusiastic about his choice. By move 15 it was already clear that White’s approach had turned out to be the more successful.

I had a choice: play a pleasant position with the two bishops, a symmetrical pawn structure and no risk, or complicate matters with the move 19.b4!? I chose the second path, and after a fierce struggle with many mutual mistakes I managed to win.

Of course, beating a strong chess player is always pleasant in itself, but in terms of opening ideas, deep concepts and quality of play I preferred my game against Wojtaszek from the penultimate round. It’s a great pity that after playing an excellent game I ultimately stupidly blundered his idea with perpetual check – thereby failing to take advantage of all my practical chances…

Dmitry, it seems to me that the main revelations of Wijk aan Zee were the tournament winner Wesley So, but also Adhiban and Wei Yi, who shared 3rd-5th place. What was it that enabled those players to conduct the whole tournament successfully and fight for the top prizes?

So has long been a top-class player, therefore it’s hard to call his victory a great sensation. Wei Yi is very strong in calculation and tactics, while in particular opening variations his knowledge is also impressive. For a couple of years now he’s been considered very promising, but lately no particular progress has been visible. Perhaps this performance will give the young Chinese grandmaster new impetus.

Adhiban was the only player other than Karjakin who managed to beat Andreikin in Wijk aan Zee | photo: Alina l'Ami, Tata Steel Chess

Adhiban, of course, was the greatest surprise of the tournament. At the start he had -2, but he ended the tournament on +2, which tells you all you need to know about his tough, sporting character. Original handling of the opening and a genuine desire to play – those were what enabled the Indian to become perhaps the most vivid player of the tournament…

Summing up Wijk aan Zee, can we say that Magnus Carlsen is no longer the undisputed favourite in supertournaments?

Carlsen showed his respect for Andreikin by taking a draw by repetition when he might have played on | photo: Alina l'Ami, Tata Steel Chess

If someone is clearly out of form, misses mate in three moves (the Carlsen-Giri game), but still takes clear second place, then that speaks volumes. I think Carlsen’s chances at the start of any tournament are significantly greater than those of any other individual player, though of course they’re lower than those of all the others taken together. You can also note that So always speaks with huge respect about the World Champion.

One of the best moments from the post-game interviews during the Tata Steel Chess tournament was when Dmitry Andreikin inadvertently said towards the end of the following interview with Anna Rudolf that he liked “walking… on water”!