The 2018 Russian Superfinals took place in Satka from August 25th until September 5th. The Open and the Women's tournaments finished in a similar manner, with rapid playoffs favoring, coincidentally, the same players that won the national championships in 2012: Dmitry Andreikin and Natalija Pogonina. They defeated Dmitry Jakovenko and Olga Girya after tying for first place after the 11-round single round-robins. Evgeny Tomashevsky and Aleksandra Goryachkina took home the bronze medals. 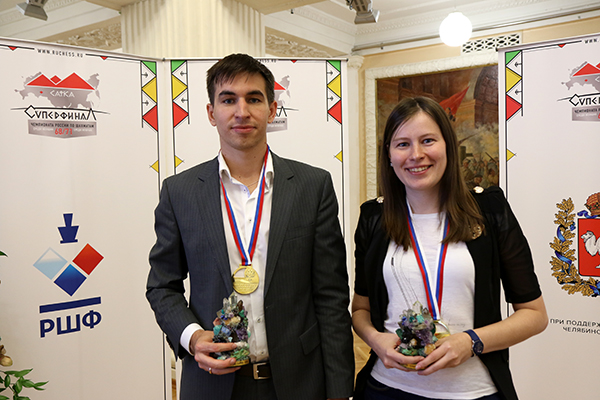 With an average rating of 2685, the Russian Championship remains the strongest national tournament in the world, despite the absence of Kramnik, Grischuk, Karjakin and Svidler (this year's U.S. Championship had a 2674 rating average). Three members of the Russian national team for the Olympiad participated, with varying results in the end: Nepomniachtchi, Jakovenko and Vitiugov.

You can replay all the games from the open section of the 2018 Russian Superfinals using the selector below:

Alexander Morozevich provided English commentary throughout the event, and was joined midway by Evgeny Miroshnichenko, who arrived after working in the Russian broadcast of the Sinquefield Cup:

Dmitry Andreikin had an undefeated performance in Satka — he shared first with 7/11 after defeating Khismatullin, Dubov and Fedoseev. His last round win over Fedossev qualified him to a playoff against previous sole leader Jakovenko. In the key game, he banked on Fedoseev's over-ambitious play, and liquidated into a winning opposite-colored bishops endgame when he had the chance. This was the position he converted into a ticket to the playoffs:

Dmitry Jakovenko's tournament was of a different nature. He lost in the fourth round against Kobalia, but later bounced back with three consecutive wins in rounds 6-8. His victory over Dubov in the penultimate day of play left him as sole leader, but a final draw against Vitiugov was only enough to reach the playoffs. 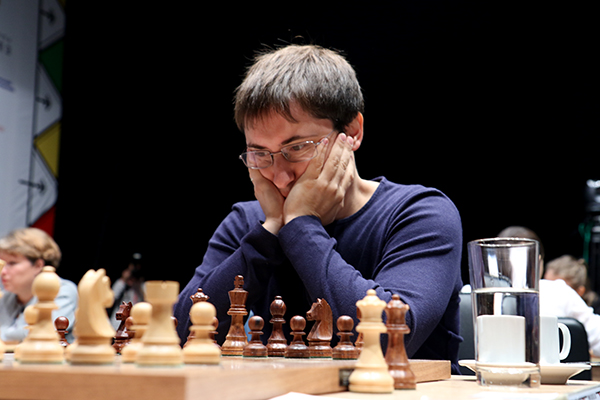 In his win over rating favorite Ian Nepomniachtchi, Jakovenko used a strong central advance to create an unstoppable attack against Black's king:

23.Nxe6 was the beginning of the end for Nepo. The final position illustrates White's dominance (you can replay the complete game here):

In the first game of the playoffs, Jakovenko obtained a decisive advantage (the computer gives +3 at some point), but was not able to convert, perhaps due to the fact that he wanted to avoid any counterplay from his opponent. This is the position — two pawns up for White — that he was not able to turn into a victory:

The game was drawn after 67 moves. 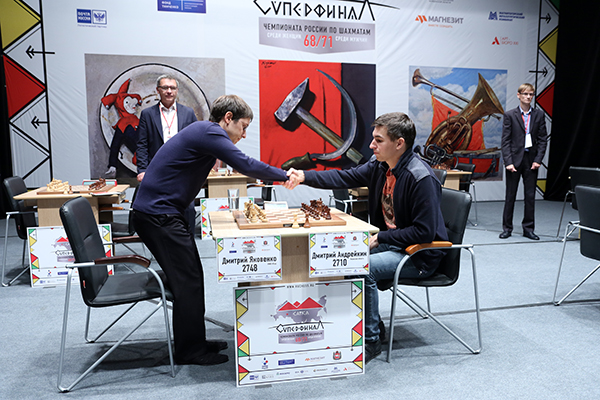 In the following encounter, Jakovenko sacrificed his knight to open White's king position. With a 10+5 time control, we cannot blame him for this decision:

Twelve players with ratings ranging from 2332 to 2559 battled for the women's national title. Besides two rounds that only included a single decisive game (rounds 2 and 3), the tournament featured fighting chess throughout.

You can replay all the games from the women's section of the 2018 Russian Superfinals using the selector below:

Just like Andreikin in the open section, Olga Girya navigated the eleven rounds of the tournament without losing a single game. Her impressive 7.5/11 was not enough to finish in sole first place, however, as Natalija Pogonina won three out of her last four games to catch up with her. Two 10+5 rapid games decided the champion. 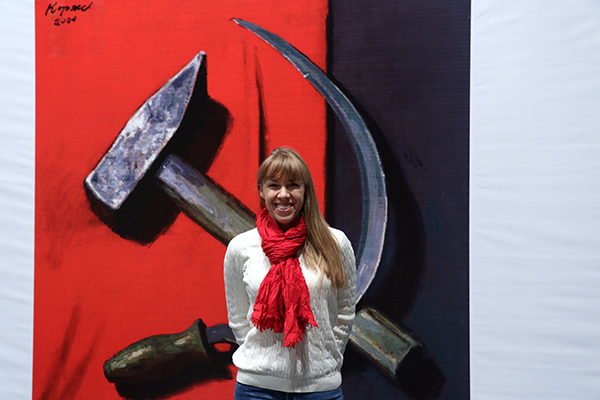 Pogonina started the playoffs with a win, after finishing the game with a nice tactical sequence:

Naturally, Girya went all-in in the second game, but Pogonina kept her cool and did not allow her opponent to get an unbalanced enough position. A draw was signed when Black already had a decisive advantage. This result gave Natalija Pogonina her second Russian title. 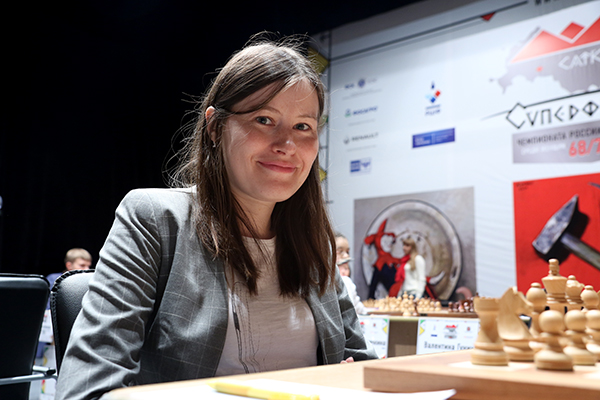