Anatoly Karpov was the undisputed World Chess Champion for the decade from 1975-1985 and held the FIDE title for another six years after the chess world split in 1993. Now 69, he remains an active player and would have played in the strong classical Tepe Sigeman Chess Tournament this year if not for the virus intervening. We're privileged to have Anatoly commentating on the latter stages of the chess24 Legends of Chess together with Judit Polgar and Jan Gustafsson. 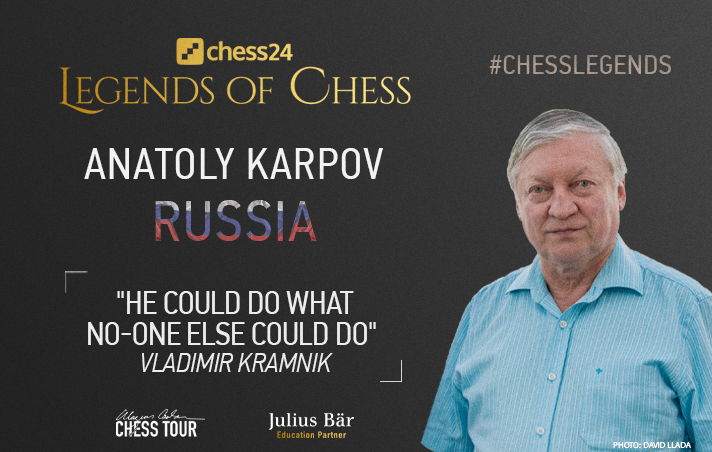 Anatoly Karpov filled the vacuum left by Bobby Fischer’s retirement and was the undisputed World Champion from 1975-1985. His quiet but relentless positional style saw him dominate his contemporaries until the emergence of his great rival Garry Kasparov.

During the chess24 Legends of Chess, Kasparov noted Karpov's "ability to locate his pieces in perfect positions", while the 14th World Champion Vladimir Kramnik commented:

His play has some mystery about it; he could do what no-one else could do. It’s easier for me to speak about him than about the other World Champions, because my first chess book was a collection of Karpov’s games. I studied them from childhood on, and then I played no small number of games against him. He was a universal chess player: a good tactician, he calculated variations well, was very strong positionally, but he had a defining characteristic. Talking half-jokingly, half-seriously, he refuted Steinitz’s postulate that says: the side with the advantage is obliged to attack under the threat of losing that advantage. But Karpov, when he had the advantage, began to stand still, and his advantage grew! In my view nobody before or since has managed to do the same; I don’t understand how it’s possible. That component of his played always stunned and enthralled me. When it would seem it was time to launch a decisive attack the guy would play a3, h3, and his opponent’s position would fall apart.

Karpov himself described how he fits into the pantheon of champions as follows:

I simply developed that universal style which dominated with the arrival of Spassky and then Fischer, but all the same we were different chess players, of course. Both Spassky and Fischer were brilliant at developing and sensing the initiative. In that regard I was, perhaps, a little inferior, but on the other hand I stood out by having excellent technique for converting an advantage, positional sense and an ability to manoeuvre positionally – in that area I was clearly superior to Spassky, and Fischer, and perhaps everyone, except Petrosian. 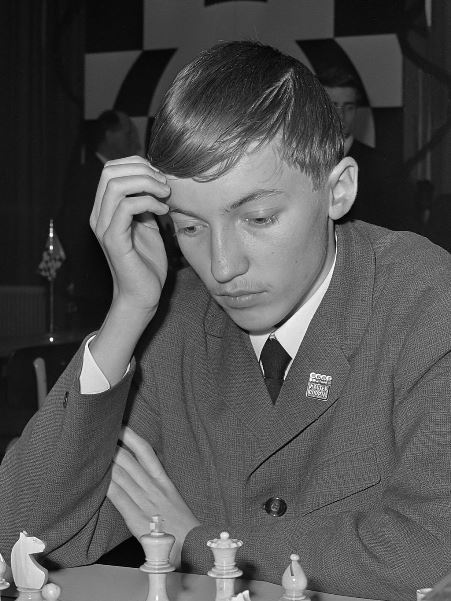 Karpov was a model Soviet child, born in the difficult post-war years in Zlatoust in the Ural Mountains, where his father worked as an engineer in the armaments industry. He learned to play chess at four and by the age of 12 was accepted into Mikhail Botvinnik’s chess school. Although the “patriarch of Soviet chess” was apparently sceptical of the youth’s unsystematic talent, Karpov made rapid progress, especially when he teamed up with opening expert GM Semyon Furman. He became the first Soviet player since Spassky to win the World Junior Championship and truly announced his arrival at age 20 at the 1971 Alekhine Memorial. Although seeded only 14th he finished unbeaten in first place along with Leonid Stein, above a field that included reigning World Champion Boris Spassky and former champions Smyslov, Tal and Petrosian.

Karpov famously stated he wasn’t ready to challenge for the World Championship in the coming cycle, but proved himself wrong, defeating Lev Polugaevsky (5.5-2.5), Spassky (7-4) and finally Viktor Korchnoi (12.5-11.5) to qualify for a match against Bobby Fischer.

The full chess resources of the Soviet Union were thrown into preparing the frail Russian to take back the chess crown, but the 23-year-old Karpov gained the title without pushing another pawn after Fischer rejected the match conditions.

Karpov dispelled criticism over the legitimacy of his title by taking part in all the top tournaments that followed and dominating his rivals, topping the rating list for longer than any player other than Kasparov and now Magnus Carlsen. He also defended his title in two matches against Korchnoi. In 1978 he survived his opponent’s late fight back to win 16.5-15.5, while in 1981 Karpov started with three wins in the first four games before cruising to an 11-7 victory.

Battles with his nemesis, Kasparov

The mid-to-late 80s were dominated by Karpov’s clashes with Garry Kasparov. In 1984 it seemed as though the reigning champion was going to deliver a harsh lesson to the young challenger, as Karpov raced to four wins in the first nine games. Kasparov then dug in, but after a record series of 17 draws it was Karpov who claimed the next win, to move to within a single win of the six required for overall victory. In the remaining 21 games, however, he failed to cross the finish line, while Kasparov scored three wins before the then FIDE President Florencio Campomanes aborted the match, to the protests of both players.

Kasparov won the rematch a year later and held on to the title in further matches in 1986, 1987 and 1990. All of them were extremely close, with Karpov losing when he only needed to draw in the final game of the 1987 match in Seville.

In 1992, the saga ended when Karpov lost the final Candidates Match to Nigel Short, though after Short and Kasparov split from FIDE he was able to claim the less prestigious FIDE World Championship title by defeating Jan Timman in 1993. He later retained that title against Gata Kamsky in 1996 and Viswanathan Anand in 1998, but gave it up when it was decided that the 1999 knockout would give the champion no privileges except a place in the 2nd round.

Life after the title

Karpov remained at the very top of world chess in the early 90s, and scored one of the most impressive tournament victories ever when he won the 1994 Linares tournament with an incredible 11/13, finishing a full 2.5 points ahead of Kasparov and Alexei Shirov in second place.

His level of play has inevitably dropped since, but he continues to make occasional appearances in team and rapid events, and in 2020 was planning to play Tepe Sigeman and Co. - a classical tournament against formidable opponents (Grandelius, Shirov, Navara, Le Quang Liem, Harika Dronavalli, Jorden Van Foreest, Nihal Sarin) until COVID-19 intervened.

As well as playing chess, Karpov has always been an extremely competitive card player and a fanatical stamp collector, with a collection valued somewhere in the region of $15 million. When he turned 60 in 2011 he embarked on a new career path and is currently a Deputy in the Russian Parliament.