Magnus Carlsen continues to lead the 2014 World Championship match by a point with two games to go after a draw in Game 10. The encounter followed the trajectory of Game 5 almost to the letter. Carlsen, playing Black, moved faster and seemed better prepared than Vishy Anand in the opening, but then ran into problems that all but forced him to bail out into a tricky queenless middlegame. Vishy looked in top form in both encounters, until he stumbled and, when it seemed he could still keep pressing for hours at little risk, he forced a rapid draw. 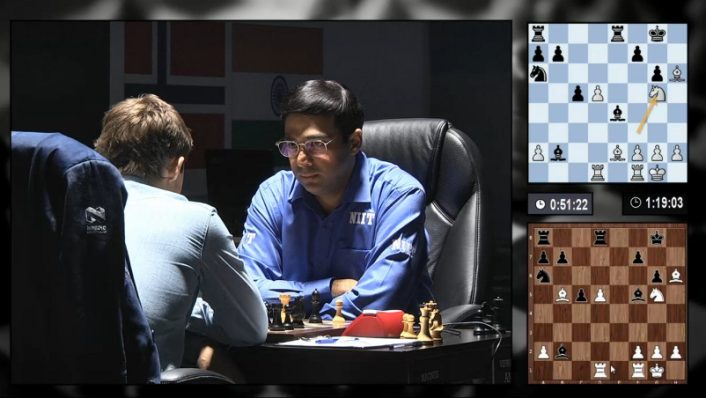 Lawrence Trent is our guide to the game:

You can replay the game and press conference below, with commentary by Peter Svidler, Ian Nepomniachtchi and Sopiko Guramishvili, who was sadly making her final appearance before heading to the Qatar Masters:

In the post-game press conference both players felt the position had been fascinating...

Carlsen: Today it’s definitely a very interesting position to delve into. As a chess player you like that.

...but both also resorted to a phrase typical of the computer age: "It needs to be checked".

Magnus admitted that he'd been too optimistic after swapping off queens:

I somewhat underestimated 19.Ng5, but after Ng5 I didn’t find it easy at all. With the two bishops he does have some pressure... I was relieved when he gave me the e-file because then I felt my problems were solved.

Anand also admitted 24.Rfe1 might have been better than his 24.Rd2, though he didn't feel he was getting anything there either. His best comment on the match situation with two games to go was a very brief note of defiance:

Overall the day could be summed up by two Top 10 chess players. As another passed pawn threatened to give Anand a crucial victory Fabiano Caruana tweeted:

Somewhere between those points, though, we had an extraordinary move transmission error. After a 30-minute think Magnus Carlsen apparently played a bishop sacrifice: 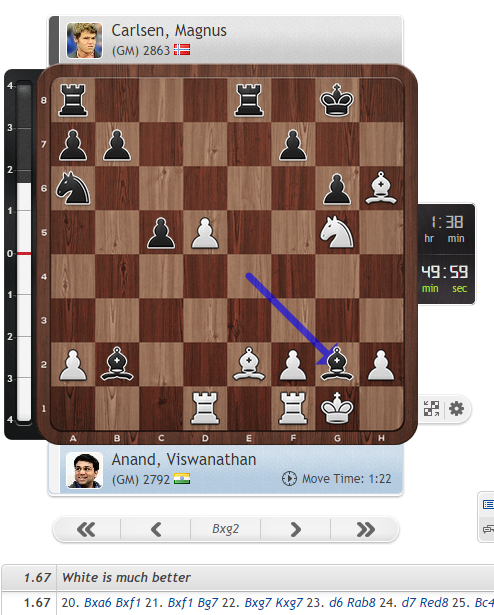 The move was replaced by 19...Bd4 shortly afterwards, but what was going on? One theory:

But Occam's razor suggests this must be what happened:

There was one last moment to cherish for chess fans who'd made it through the post-game press conference. In the final question Carlsen was asked about yoga, and whether he'd tried the "Bird of Paradise". It didn't elicit a spectacular response:

Will you try it?

Probably not with the media there.

But just after that, as they were preparing to leave, Vishy could be heard to ask, "What is it, a cocktail?" Carlsen had to explain, "No, no, it's..." with flailing arms. Actually it is also a cocktail, but the following video, where the yoga instructor speaks English, will make things clearer - as well as answering the burning question: "Who's the most flexible person in Team Carlsen?"

So six of the last seven games have now been drawn, with Carlsen continuing to lead by one point:

The players have a rest day after each game now, so the teams will have time to hone their weapons for the absolutely critical Game 11 on Sunday. Carlsen will retain his title with a win, but any other result will see the match go down to the wire.


In the meantime why not check out another match! The Showdown in Saint Louis between American and Armenian number ones Hikaru Nakamura and Levon Aronian starts at 21:00 CET. The commentary team will be the same one that featured in the Sinquefield Cup earlier this year, so it's guaranteed to be a great show. Watch it on our live broadcast page!