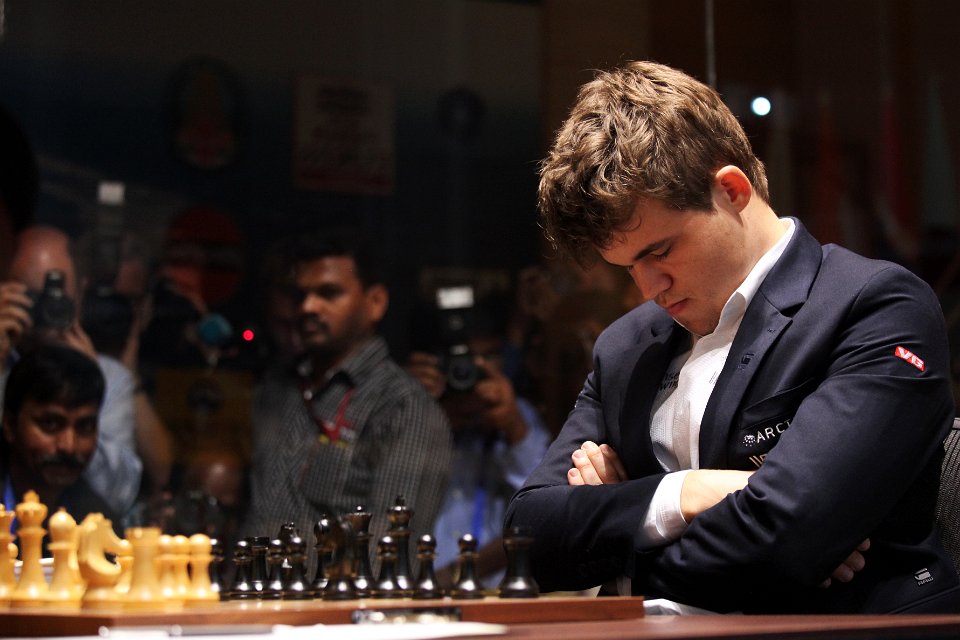 Only a miracle can stop Magnus Carlsen claiming the World Championship title after he notched a third win on Thursday in Chennai. He now needs only half a point from the remaining three games after an encounter that had spectators on the edge of their seats. While World Champion Viswanathan Anand burnt time trying to find a clear win Carlsen defended with computer-like precision and pounced on a moment of chess blindness. It was a shattering turnaround, with GM Rustam Kasimdzhanov writing in his notes for chess24: “As cold showers go, this one is liquid hydrogen”.

Anand had taken advantage of the rest day to gather his forces for one final do-or-die effort. He chose 1.d4 rather than trying to topple the Berlin Wall and followed the pre-match recommendation of our Spanish editor IM David Martinez by playing 4.f3 against the Nimzo-Indian.

Carlsen surprisingly chose the sharpest response and Peter Svidler, commentating with Sergey Shipov for ChessTV, felt Anand couldn’t have imagined getting such a good position, adding:

The way Carlsen has set out to play this game speaks of his confidence that nothing can go wrong in this match. There were lots of other options…

Rustam Kasimdzhanov describes a game that very nearly did go wrong for the Norwegian Champion elect:

4... d5 5. a3 ♗xc3+ 6. bxc3 c5 7. cxd5 exd5⁉ But this is kinda unusual! After 7...Nxd5 we'd get the very main line of 4. f3, which Vishy has already played several times with White; Black has a variety of solid setups there. The choice of 7...exd5 makes me wonder if Magnus felt like being solid at all. Now we get a structure made famous by a Botvinnik-Capablanca game. Sharp stuff...


8. e3 c4⁉ And this is sharper still! Black gains superiority on the queenside and stops Bd3, but White will have a free hand on the kingside and in the centre! Normal play would have been

) somewhat easier for White to play.

9. ♘e2 ♘c6 10. g4! An excellent move, and in fact the only plan; the knight belongs on g3 but going there too early only blocks White's play.

17. ♕xc1 ♖a6 18. e5 An interesting move, played quite quickly. At this point in the game Vishy was playing faster and more confidently than Magnus. Another option was

18... ♘c7⁈ A truly unbelievable move, in my opinion - Magnus leaves the kingside unprotected and just proceeds with his plans to play b5-b4. While I didn't find a forced win after 18...Nc7 I still feel that 18...g6 would be safer and probably also simply better.

20. axb4⁈ The first difficult and important decison for Vishy in the game! I remember thinking White shouldn't exchange rooks just yet, and in fact 20. f5 might well have been stronger...

25. ♕h4 ♘e8! Quite unbelievable, but this might not be lost for Black; hats off to Magnus' intuition - most players in the history of chess would assume the worst here.

28... ♕e1! As cold showers go, this one is liquid hydrogen. Vishy resigned.

It was a cruel end to an enthralling game, and brought sudden clarity to the match situation. Nigel Short’s tweet said it all:

A Norwegian journalist quoted that tweet at the press conference – displaying a lack of tact we’ve become accustomed to during the match – but neither player harboured any illusions. 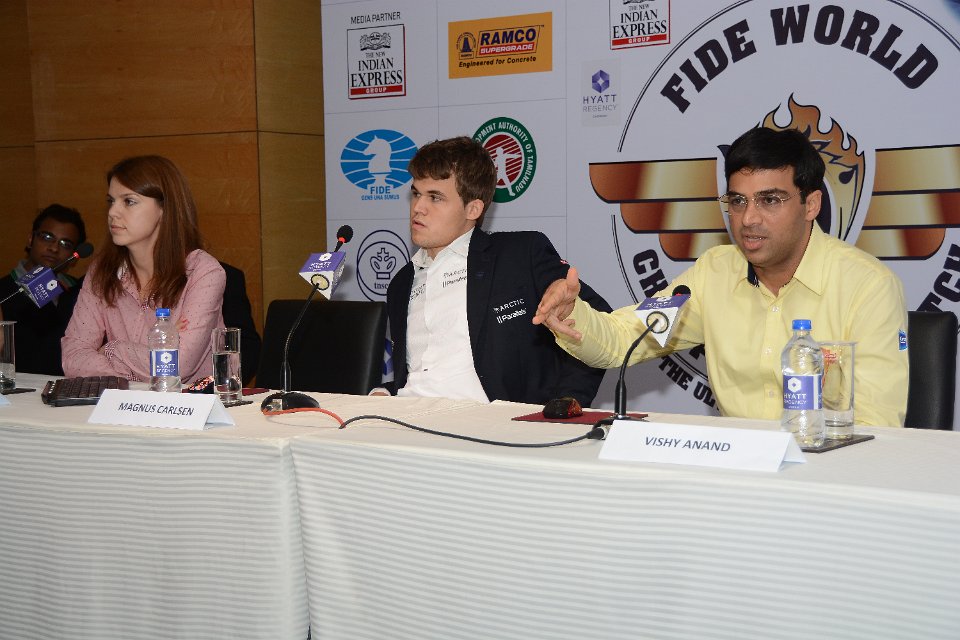 Anand responded to a question on whether he would try to win the next three games in a row with a good line in understatement: "Of course I'll try, but it doesn't look very good" | photo: JM Mahesh

Carlsen admitted he'd been on the brink:


It was a really tough game. From the opening it was clear that it was going to be extremely unbalanced and I was running a serious danger of getting mated, which I hadn’t in previous games.

I just had to go all-out for counterplay. There were an amazing number of complicated lines. I wasn’t sure really about what to do but as it happens my moves weren’t that complicated – I had to play the only moves all the time, and fortunately for me he blundered. 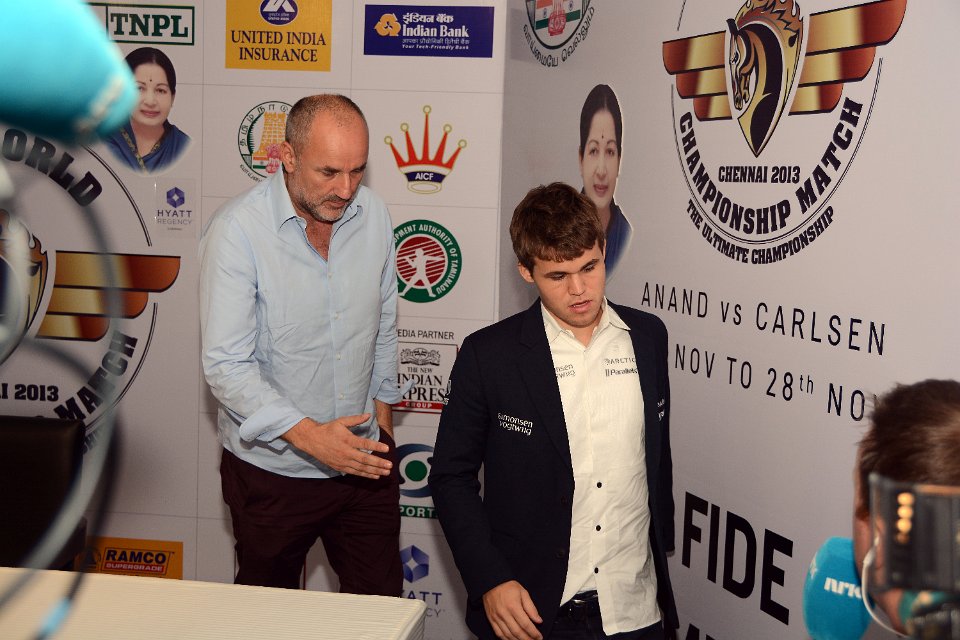 Still, Anand had no regrets and was clearly in better spirits after having at least managed to spark a fight. The atmosphere around the match had been becoming oppressive following the two previous draws, as GM Emil Sutovsky captured in a wonderful preview of the game written as a tale of kings:

A crowd of millions stood at the foot of the throne on which the pale king sat. The days of his reign were numbered, and almost everyone but the lifelong faithful from the royal family and his tribe had managed to sing the praises of the future ruler who, with no hint of embarrassment, had already tried on the royal mantle. There wasn't long left to wait, but the crowd was restless, overcome with a lust for blood. They criticised the king for his reluctance to die in open combat as all his predecessors had before him (except the Great Madman, who on seizing the throne immediately hid from view and spent long years in solitude); others, as if having forgotten his military feats, said the king had never actually been a real KING, while still more waited with impatience - when would the "pathetic spectacle" be over. Finally the day came when the king was going to sign his abdication. The triumphant heir smiled grimly - not because he was unhappy, but because he simply didn't know any other way. And then...

It seems to me Anand will win today.

Or at least he'll be very close to victory.

It was almost prophetic… but the smart money is now on a changing of the guard taking place on Friday, when Magnus Carlsen needs a draw with the white pieces to claim the title.