Viswanathan Anand got a round of applause from Indian chess fans when he played 1.e4 in Game 2 in Chennai, but that already seems a distant memory. Two bruising losses have left the World Champion licking his wounds, and when Magnus Carlsen played Bobby Fischer's favourite move in Game 8 chess fans were dismayed to witness another lifeless draw. As GM Jan Gustafsson puts it in his exclusive annotations for chess24, "1. e4 has become a drawing weapon in World Championship matches!" 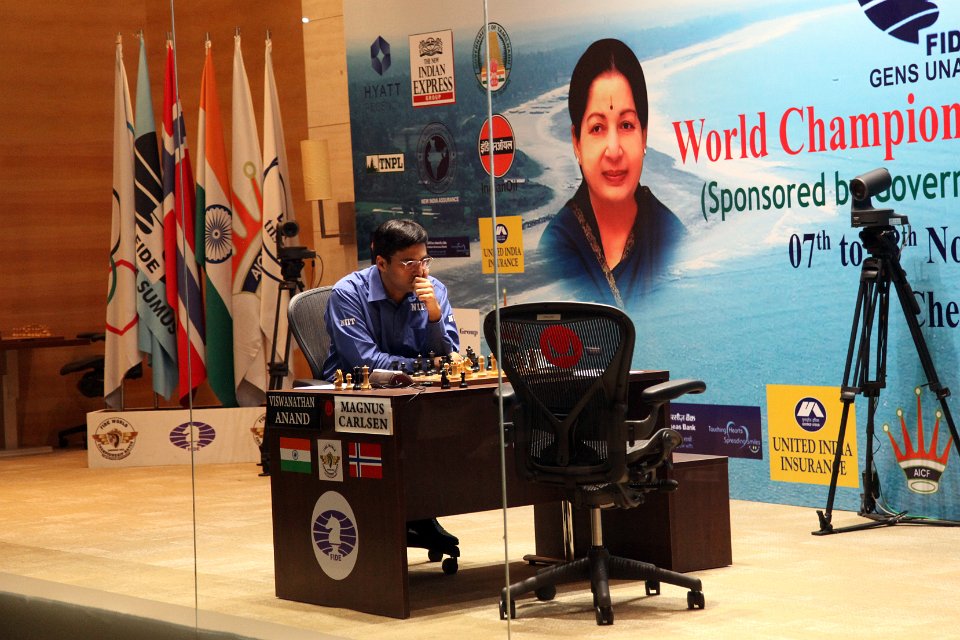 Before the game the pundits were speculating whether the time had finally come for Vishy to go "all-in". After all, only five games remained and he needed two wins against the player who's dominated the chess world for the last four years. World no. 4 Hikaru Nakamura already seemed to have decided the battle was lost, but knew a man who might be able to withstand the forces of darkness:

The battle behind the glass wall in Chennai was of less earth-shattering proportions, as GM Jan Gustafsson narrates:

1. e4 For the first time in the match Carlsen resorts to his main weapon, 1. e4. 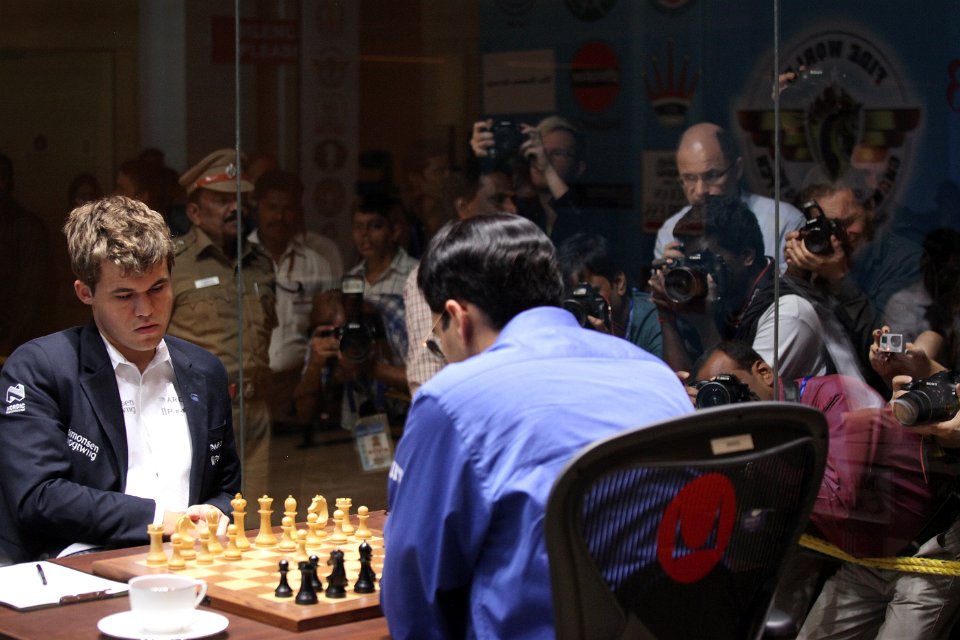 While one could argue that Carlsen's opening choices with White haven't been spectacular in the match so far anyway, and that being flexible is part of his unique strength, I have a different theory: 1. e4 has become a drawing weapon in World Championship matches!

The last 1. e4 win I can recall is Kramnik-Leko in Brissago 2004. Even Anand himself switched to 1. d4 to defeat Kramnik in 2008. The only game when he switched back was the last one, when he needed (and achieved) a draw to secure the title. Which, by the way, makes me wonder why Anand did not give 1. d4, 1. Nf3 or 1. c4 at least one shot during the match - his 3rd white game being one logical spot.

So why is 1. e4 a suitable drawing weapon?

All this is speculation under the assumption that Carlsen was happy to draw this game, which given his +2 score with 5 games remaining would be a very understandable choice. Back to the game!

1... e5 A very good move, not giving up space in the centre. And an indication that Anand himself doesn't quite believe in going all-out for the full point in this one, 1...c5 or 1...g6 being the typical choices for that purpose.

3... ♘f6 None here either - the Berlin has gone from "clever anti-Kasparov strategy" in 2000 to "main defence of every top player against 1. e4" in 2013. While I don't agree that the Berlin ending we saw in game 4 is all that drawish, there's an extra option for White...

4. 0-0 ♘xe4 5. ♖e1 ...and this is it! Very solid indeed. Off-topicish, this move is at fault for subjecting me to Kramnik's anger. The reason was my recommending Smeets to do this against him (and draw) in Wijk aan Zee one round after Smeets went for the main line 5. d4 and got beaten up by Magnus. Vlady wasnt happy.

5... ♘d6 6. ♘xe5 ♗e7 7. ♗f1 Very common stuff. While this is by no means a dead draw and the likes of Vallejo, Kasimdzhanov and many others have used this line to play for a win, the main feature of the position is the symmetrical pawn structure and the very low risk White is running because of it.

9... ♘e8 is a popular alternative as well, but it arguably gives White more chances for an edge after 10. d5⁉

11. ♗f4 have been tried quite a bit too, mostly leading to the same result.

11... ♖xe1 12. ♕xe1 ♘e8! Again we see this typical move, removing the knight from its slightly awkward post and freeing the way for the d-pawn, which in turn allows the black queenside to unravel. White will develop his pieces as well and hands will be shaken. Or, to quote Carlsen in the post-game press conference:

He played the Berlin, I played the most solid line, yada yada yada, let's go to the doping control.

17. ♘b3 featured in Nepomniachtchi-Riazantsev. No bonus point for guessing the results of those games.

23... ♕d8! No worries, Anand had figured out the following sequence well in advance. More exchanges are coming up.

The reaction of the popcorn gallery was perhaps inevitable. A few brave souls tried to remain optimistic, with Mig Greengard justifying his decision to get up at 5am to watch:

The prevailing opinion was less optimistic. Nigel Short knows how it feels to crash and burn in a World Championship match and thinks Vishy is simply looking for a pain-free exit:

The fact that FIDE chose this particular moment to subject the players to a doping test - delaying the press conference 20 minutes - was met with predictable derision. Nigel Short was again just one of the many to complete the joke:

And that left only the press conference. By the standards we've come to expect of the match it wasn't particularly cringe-worthy, but neither player was giving much away. Anand had spent a minute and a half contemplating his response to 1.e4 and admitted the move every beginner is taught first had come as a surprise: "I hadn't prioritised e4". 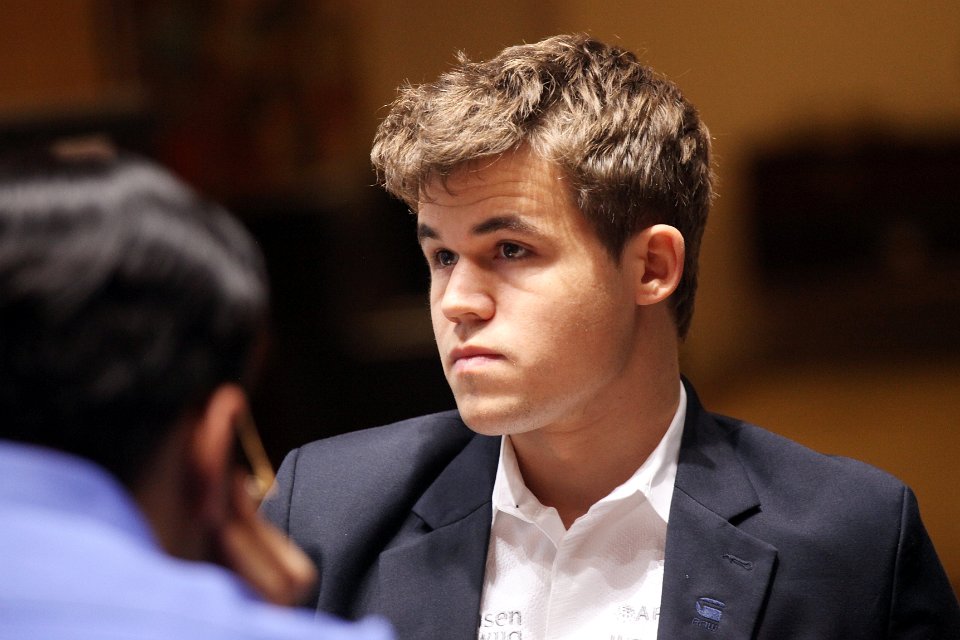 Carlsen: "I've had some time to adjust to the situation" | photo: Anastasiya Karlovich

Carlsen's "yada, yada, yada" summary of the game (quoted by Jan above) is destined to dominate coverage of the day's play, but perhaps the most interesting moment of the press conference was his reflection on how his style has changed since he burst onto the international scene:

No, I didn’t have any particular idol in chess when I was young. I think as a young player I was also trying to play attacking chess, sacrificing material all the time – a bit different from what I do today. I’m fairly young but I’ve been playing at the top level for a long time – for 7 years. I’ve had some time to adjust to the situation and to the other players and develop my play accordingly.

The World Champion now has four more games to adjust to his opponent's current remorseless precision - otherwise Magnus Carlsen will match Garry Kasparov and claim the World Championship title at the age of 22. Anand will have the white pieces in Thursday's Game 9.