Vishy Anand's hopes of retaining his World Championship title are hanging by a thread after he lost a second game in succession in Chennai. It was déjà vu, as the players again reached an innocuous position early in the game only for Vishy to start to slip and Magnus Carlsen to begin to work his magic. In exclusive analysis for chess24 Rustam Kasimdzhanov pinpoints where he thinks the World Champion went wrong. 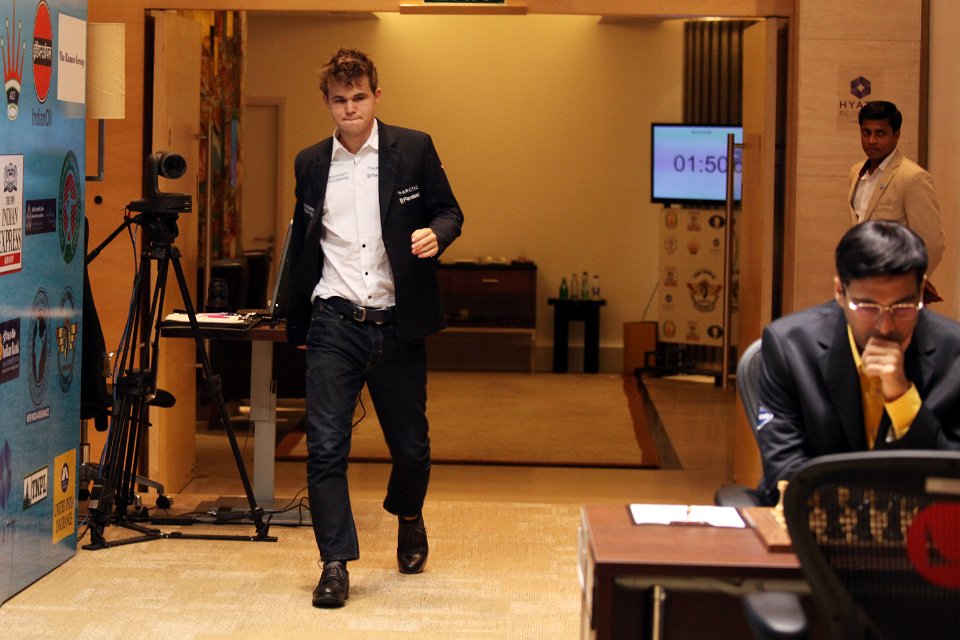 Carlsen walks onto stage with a spring in his step | photo: Anastasiya Karlovich

Anand is no stranger to falling behind in World Championship matches. He lost the first game against Veselin Topalov in Sofia in 2010 and Game 7 against Boris Gelfand last year in Moscow. On both those occasions, however, he bounced back straightaway to win the next game.

For a brief moment on a rainy Saturday in Chennai it seemed pulling off the same feat might again be a possibility. Soon afterwards, however, Anand was playing for nothing more than a draw. As late as move 51 GM Evgeny Gleizerov wrote in his live commentary at ChessPro, "No, neither Carlsen nor even God himself will manage to squeeze water out of this particular stone," but when it rains it pours...


Rustam Kasimdzhamov looks at where it all went wrong:

A lot of unusual things happened in this game. We should remember that Vishy lost the previous game in quite a painful manner...

4. d3 A better chance to fight for an edge against Magnus; the main line brought Vishy only trouble in Game 4 (though he did save that game, to be fair...).


13... ♘b8⁉ 14. h3? A question mark might be harsh, but in fact it's moves like this that lose World Championship matches. White had at least two promising options:

23... ♗xe3! 24. fxe3 ♕e7 One of the things I've learned from bitter experience is that e4 and e3-pawns are always weak... don't believe your books that tell you these pawns control central squares - they're just a wound in the heart of White's position.

60. ♖a4? A losing move - the queenside pawns Vishy was reluctant to exchange now come back to haunt him, giving Black perfect cover from all the side checks.

While Anand had obviously made mistakes no-one could deny Carlsen's endgame mastery:

In the press conference both players felt 57.Rc8 rather than 57.Rg8+ (pushing the king where it wanted to go anyway) would have been a simple draw. Magnus explained he was grateful after that for his opponent falling for his "one little trap" with Kf4 and Ke3, and felt it might have been impossible to hold. When the tournament press officer Anastasiya Karlovich suggested the drawing 60.b4! he dismissed it instantly as "way too slow".

Today I got a pretty solid position early on but I thought I should also try to capitalise on the win yesterday and press him a little bit today, because there wasn’t really much to risk. Fortunately I got a little bit lucky and I won again. Obviously I’m in a good mood now. I’ve won two games and with six games to go that’s obviously a healthy lead.

Anand was visibly shell-shocked and the press conference turned into an ordeal. 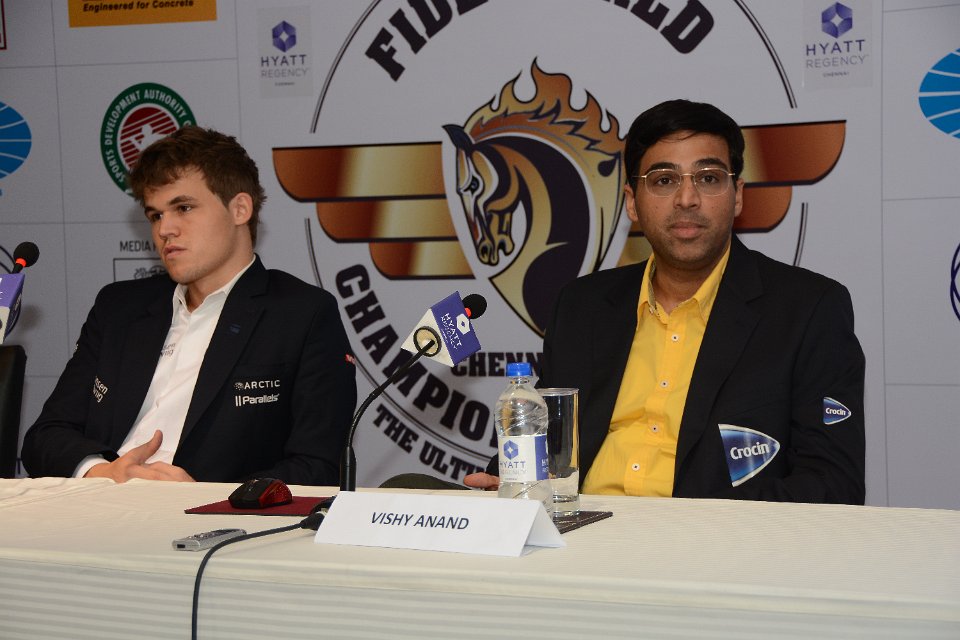 Anand: "Today's a heavy blow - I won't pretend otherwise - but there's nothing to be done, you just go on" | photo: JM Mahesh

It's perhaps worth recording the tongue-in-cheek advice for journalists given by current Indian no. 3 Parimarjan Negi in his fantastic blog:

But don’t worry, to help the press guys, I compiled a few questions you may want to avoid:

If you can think of any more of these bloopers, please add them below so our friends can be warned

Today the journalists seemed determined to add to the list themselves. First an Indian asked Anand for his thoughts on cricketer Sachin Tendulkar, whose impending retirement was the top story in the Indian press. Vishy remained patient:


I’ve sort of been following what he’s been doing, but let’s say I’ve had other things on my mind

Then a Norwegian journalist wasn't satisfied with Anand responding, "you just do your best," to a question on how he would deal with the blow he'd suffered. His surreal follow-up question finally pushed Vishy over the edge:

Journalist: I’m still wondering if Mr Anand can elaborate what he means by “doing your best”…

Vishy will need to gather his strength on tomorrow's rest day if he's going to stage an unlikely recovery. Otherwise we might be witnessing generational change in chess. As one fan put it: