Magnus Carlsen has taken the lead after beating Viswanathan Anand in Game 5 of their World Championship match in Chennai. It was a quintessential Carlsen victory - despite gaining nothing from the opening he continued to apply pressure until his opponent finally cracked in the 5th hour of play, just when a draw seemed within touching distance. In exclusive analysis for chess24 GM Jan Gustafsson examines the first decisive game of the match. 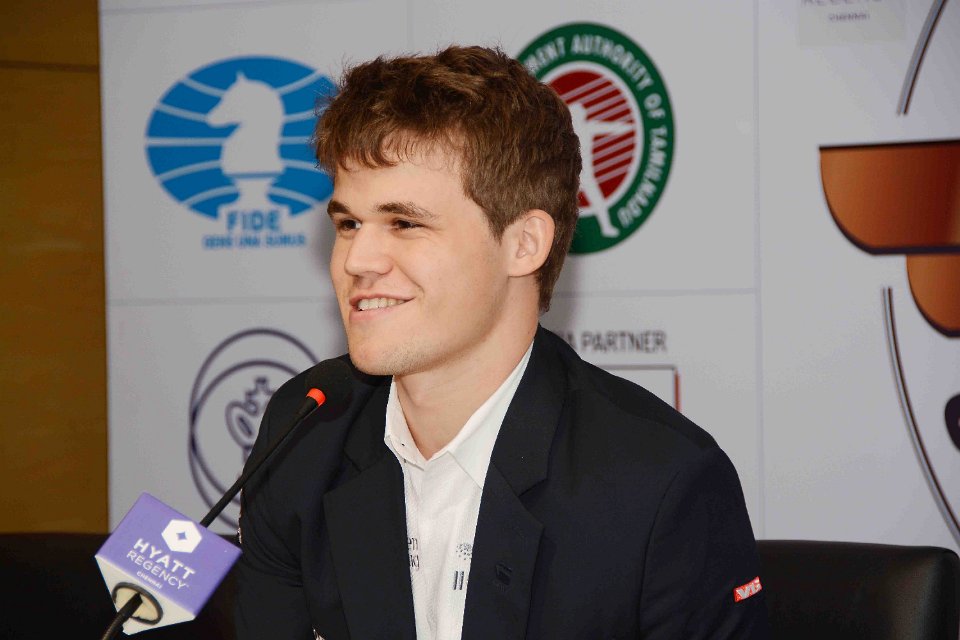 It's not every day you see Magnus Carlsen with a smile this wide on his face | photo: JM Mahesh

Carlsen seemed to return to the bustle of Chennai with new-found energy, while Anand was soon on the back foot and eventually slipped to the kind of dispiriting loss his preparation for the match must have been focused on avoiding. 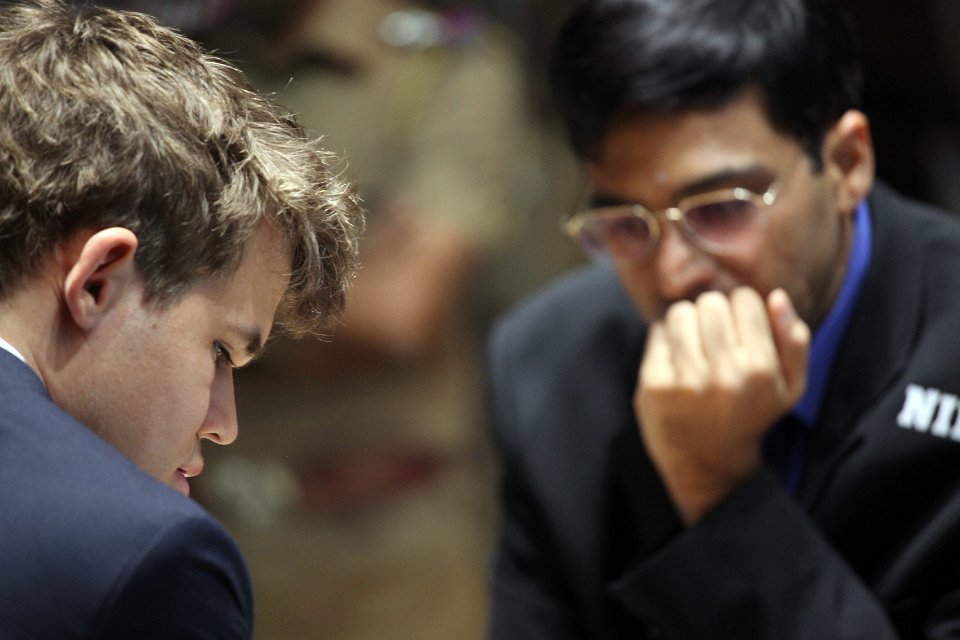 The players cut contrasting figures both during and after the game | photo: Anastasiya Karlovich 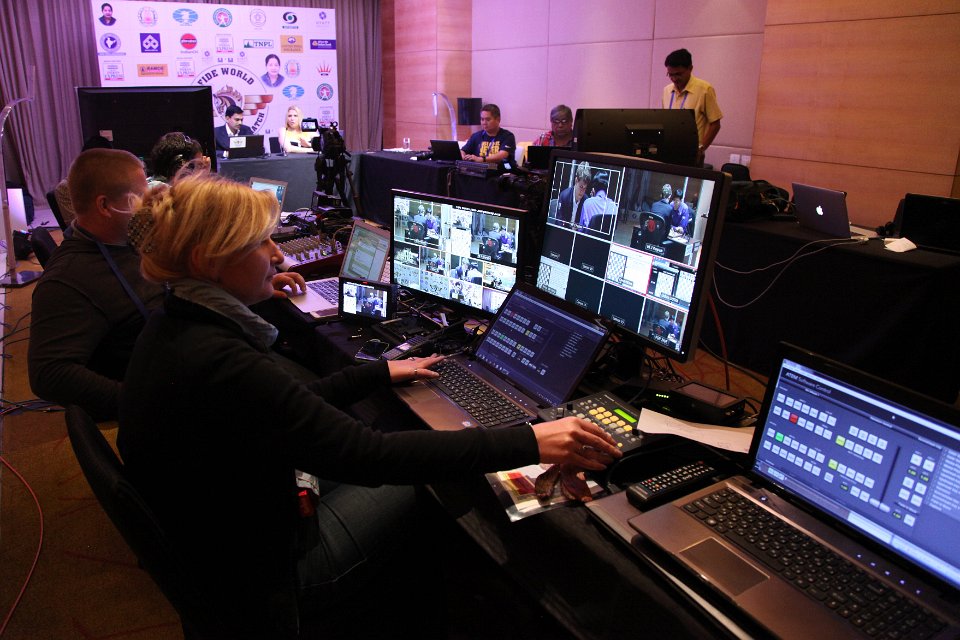 A behind-the-scenes look at the live broadcast | photo: Anastasiya Karlovich

1. c4 is another of those moves that makes you wonder, "Why did he start with this and not 1. d4"? Nowadays, more often than not, 1. c4 is used to avoid certain setups against 1. d4, especially the Grünfeld and the Nimzo-Indian. That benefit comes at the price of allowing 1...c5 and especially 1...e5, with the latter the most scary for me. Whenever I play 1. c4 I have an anxious moment thinking, "don't go e5, don't go e5!" Sometimes they do anyway...

1... e6 Vishy prefers to advance only one square. This is typically done with the intention of following up with d5 and steering the game into QGD territory, which is consistent with Vishy choosing 1...d5 against 1. Nf3.

2... d5 3. ♘c3 c6⁉ A sneaky move-order, establishing the "Triangle". Incidentally, this has recently been covered in an excellent book by Sherbakov. Black keeps open the option of transposing to the Semi-Slav, which has been a backbone of Anand's repertoire for years, while avoiding annoying lines such as

4. e4 The most principled option. This normally involves a pawn sacrifice and deep preparation from White, which would seem to be a bit out of character for Magnus. Anish Giri gave voice to his confusion on Twitter:

6. ♗d2 is the main line, leading to beautifully messy positions after 6... ♕xd4 7. ♗xb4 ♕xe4+   8. ♗e2 (or 8. ♘e2 I've spent far too many hours myself looking at the crazy lines that ensue. They're scary for Black, by the way, but Magnus remains in character, using a move that only gets a brief note in my lines compared to the tons of analysis dedicated to 6. Bd2.)

6... c5 This is supposed to be fine for Black, but the territory is relatively uncharted.

10... cxd4 11. ♘xd4 ♘g4! Snapping off one of White's important bishops. Black must be doing all right here, which confirms the harmlessness of Magnus' 6. Nc3.

13. fxe3 Let's take stock for a second. Black has the two bishops and a slightly better pawn structure. White, in return, has a small lead in development and slightly more central control. White doesn't have any particular threats, so we'd expect Vishy to catch up in development, right?

13... ♗c7⁈ I just don't get this move, or the reason behind it. Provoking Carlsen into a long and pleasant (for White!) ending can't be a good idea.

13... 0-0 was an obvious and good choice, e.g. 14. ♘xc6 bxc6 15. ♕xd8 ♗xd8 with a better version of the endgame we got in the game. If Vishy wanted to avoid that endgame, which is probably a reasonable idea against an endgame virtuoso like Magnus, then both

21... ♖ab8 22. ♗xe4 ♖xb7 The position has undergone one more transformation. Due to Black's isolated pawns on e6, c6 and a7 White is better. Still, even this might be tenable. What it won't be is great fun. And that includes to annotate - I don't really have a clue about the following subtle manoeuvring and will therefore restrict myself to some short, general comments.

24. ♖f4 Intending to double on the f-file and fishing for some weakening pawn moves along the way.


24. ♖d4⁉ , going after the d-file instead, might have been more promising.

33... g4 is given by the computer. Anand has done a good job of keeping the position together, although he was highly critical of his next move at the press conference.

34. ♖1f2 ♖d4 It looks quite ok, though, so it's hard to believe this is the decisive mistake as he claimed.


47... ♔d4 48. ♗xb3 axb3 49. ♖xh4+ ♔xe5 50. g3 should win as well, as far as I can tell. Then again, I can't tell very far in rook endings and the Karsten Müllers of the world might well find a draw somewhere around here. Drawing chances over the board against Carlsen are slim, though, so I stand by my evaluation of Rc1 as the final error.

52. a4! Priorities! The a-pawn will be pushed, tying down the black rook and king, then the h-pawn will finish the job.

Carlsen draws first blood! Anand showed comeback skills in the Topalov and Gelfand matches - will he be able to do so again? 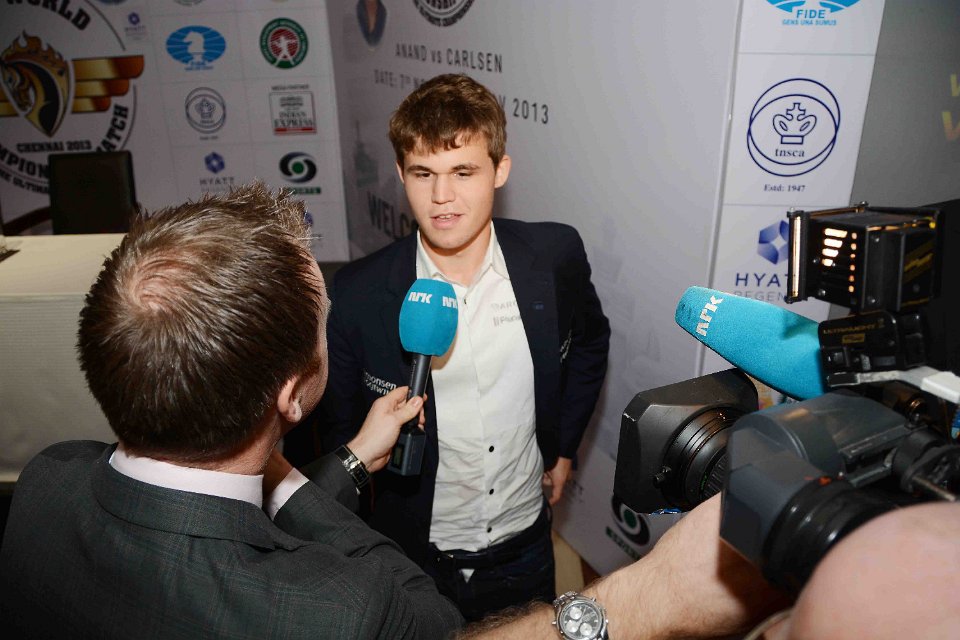 Computers armed with tablebases (databases of perfect play when only 7 pieces or less remain on a chessboard) point out it’s checkmate in 33 moves after 52…Kxe5, but even former World Champion Garry Kasparov was impressed with how easily Carlsen executed the winning endgame plan. As he summed up:

The post-game encounter with the press followed a familiar inverse law – the more exciting the game the shorter the press conference. You can rewatch it below:

The young Norwegian was of course delighted to have made a breakthrough in the match:


It was a good fighting game - kinda messy at times, but I got there in the end, so I’m very, very happy about that

Anand was visibly deflated, but still had to endure the ordeal of being confronted with the computer-backed omniscience of the journalists. 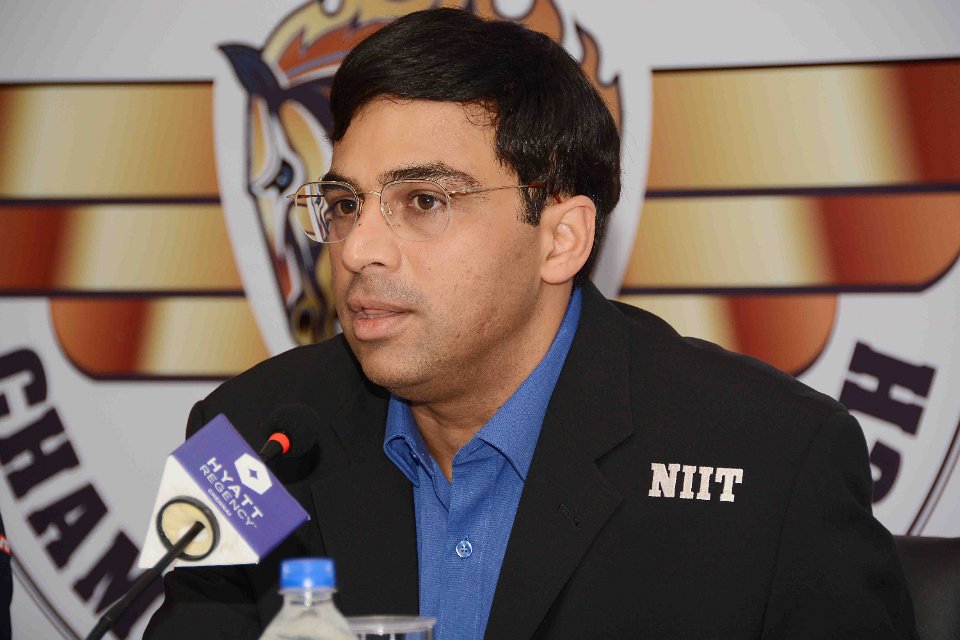 As Jan mentioned in his annotations Vishy attributed his downfall to the apparently blameless 34…Rd4, which he felt, “looks strong but turned out to be a mistake” | photo: JM Mahesh


It’s possible, but somehow I missed that the rook ending is so difficult. I thought I should be able to generate counterplay, but it wasn’t possible.

The positives for the World Champion are that he now has the white pieces in the next two games, with no less than seven remaining in which to level the score. He also has a record of coming back the very next day after losses in his last two World Championship matches, though he was struggling to look on the bright side in the press conference:

Journalist: Can you take heart from the fact that when you lost against Topalov and Gelfand you came back strong after that?

We’ll find out if history repeats itself in tomorrow’s Game 6!