A tremendous last-ditch effort saw World Champion Vishy Anand hold on for a draw in the best game of the match so far. Although Magnus Carlsen will be disappointed not to have driven home the advantage he gained by snatching a pawn in the opening he can draw confidence from managing to torture his opponent for six hours - something GM Rustam Kasimdzhanov describes in his analysis for chess24 as, "the secret of Carlsen's phenomenal results". 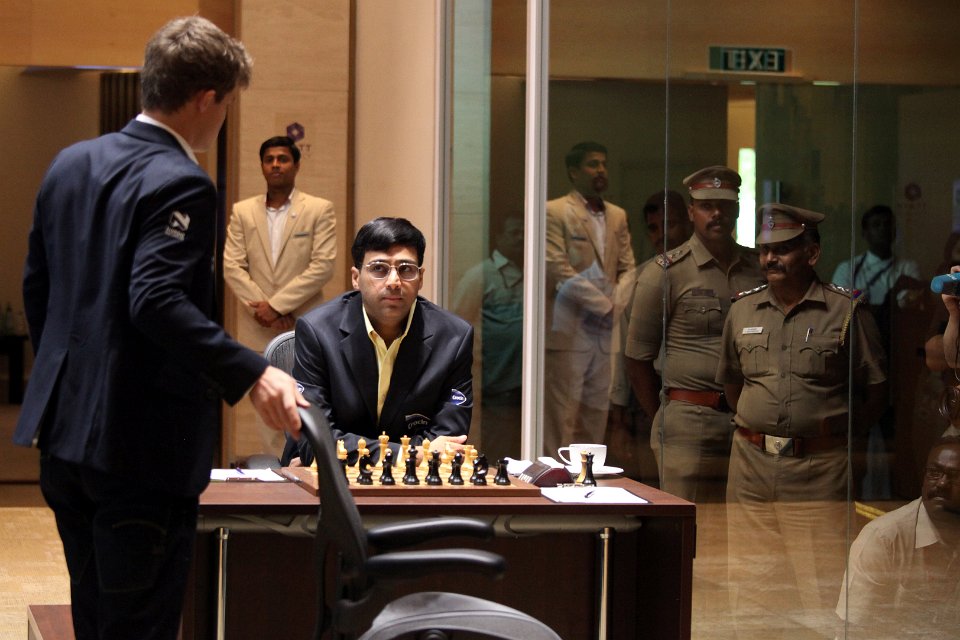 The players remain locked at 2:2, but in the last two games the match has exploded into life. Although it's traditionally seen as an advantage to have the white pieces and move first Black has so far been in control in each game. An explanation for that paradox was given by Boris Gelfand while commenting on Game 4 for ChessTV. He pointed out, "it's much easier to prepare for Black", as the second player can choose the direction play takes.


That still leaves the mystery of why the World Champion seemed surprised by a sequence of moves played more than once in the past by Magnus Carlsen's only confirmed second, Jon Ludvig Hammer. chess24's Rustam Kasimdzhanov was also extremely puzzled by the early stages of today's game:

16. ♘e1 ♘g6 17. ♘d3 Bringing the knight to d3 is a slightly strange manoeuvre. White is already experiencing problems - e5 is very weak and the cluster of white pieces in the centre isn't really harmonious... 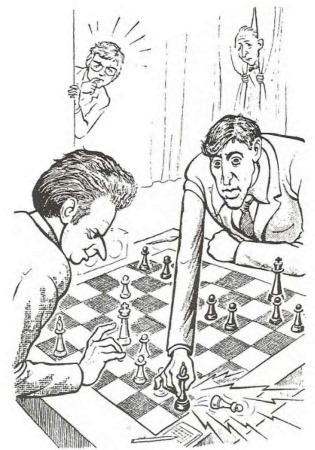 Why not, indeed! It does look a lot like Fischer's Bxh2, with one major difference - Bxh2 lost a piece, Bxa2 wins a pawn :)

19. b3 c4! 20. ♘dc1 cxb3 21. cxb3 ♗b1 The bishop escapes, but White gets some time to generate counterplay. Objectively White's chances should be minimal, but the temporary initiative is on his side. Black needs to be very precise, and that's not easy even for Magnus...

34... ♗e8 35. ♘e4! Vishy puts up a very spirited defense! With a fine disregard for further material losses he fights for the initiative - and Magnus falters!

57. ♖d8! With hardly any time left Vishy became visibly nervous, but he pulled himself together and found salvation! 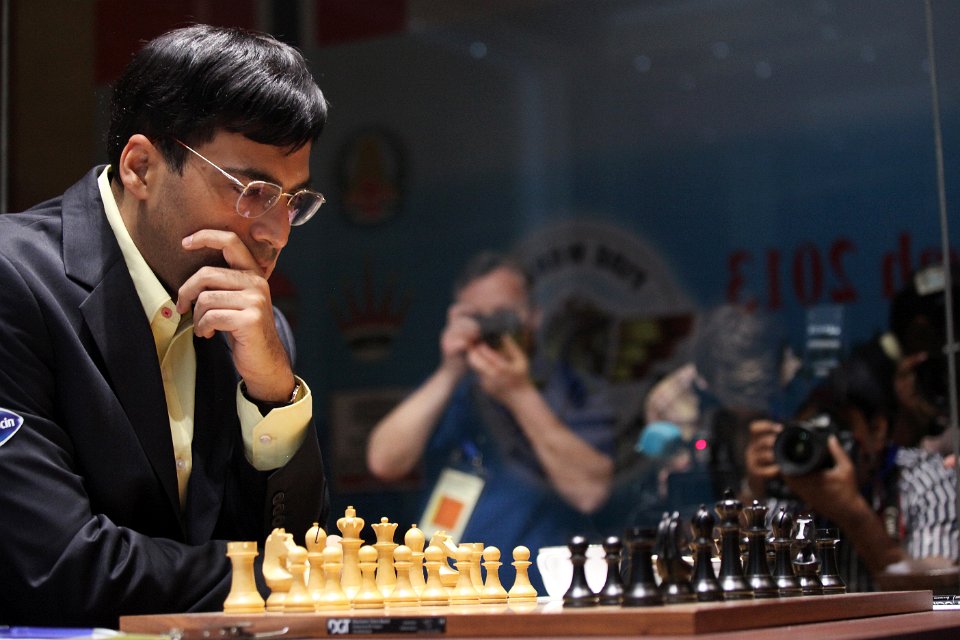 In the post-game press conference Anand was obviously both annoyed with himself and very relieved:


Something went horribly wrong in the opening. I made one illogical move after the next and then I just missed something with 18.Ne2 - and suddenly I’m basically lost... I didn't really miss [18...Bxa2] but somehow I’d been drifting already and if I don’t play Ne2 it’s not clear what I’m doing. 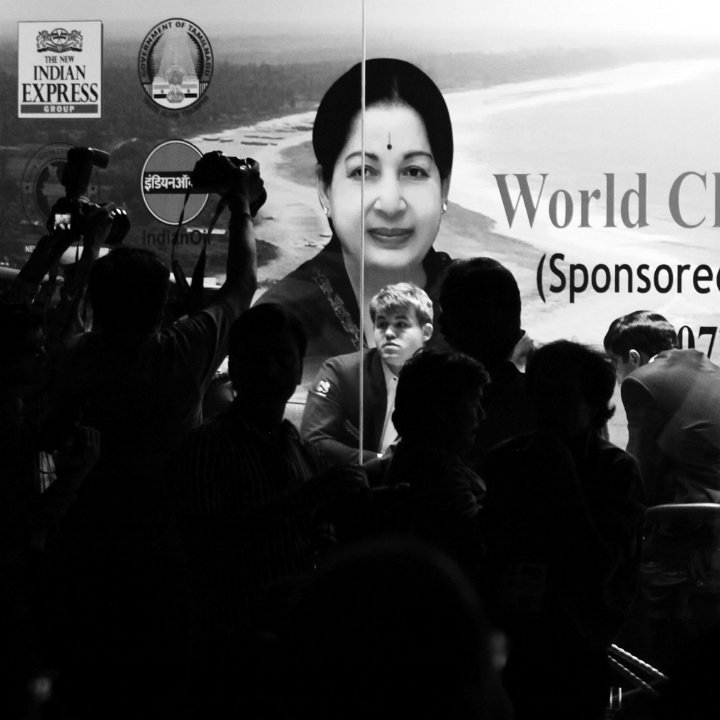 Carlsen indulged in some sarcasm when asked if he was happy to have played a long game: "Yeah, I’m very happy that it was a long game – I had an advantage and I didn’t manage to win – that’s really a thrill" | photo: Anastasiya Karlovich

Carlsen was disappointed but admitted his opponent "kept finding very good resources". He felt his decision to play on was fully justified by a problem he managed to pose on the 56th move.


I really checked everything and thought I’d done it, and then he found 56...Re6 and the point is that after Rxg5, b5 wins. I had a minute left at this point, so again I was lucky that I could play Ra8+, Rag8 and get to the time control. For Grischuk it’s just another day, but for me it’s not every day I get to under a minute.

It seems no press conference is complete without a moment of controversy, and once again it was provided by former World Champion Garry Kasparov. 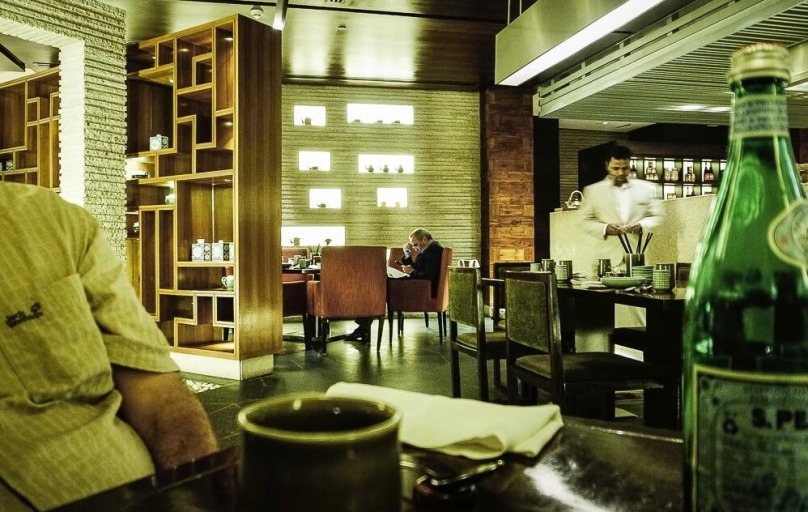 Kasparov spotted in one of the hotel restaurants | photo: Eric van Reem

A Norwegian journalist twice asked Anand why his team had apparently asked for Kasparov not to sit in the front row of spectators. Anand said he knew nothing about it (it's easy to imagine his team might have asked without telling him), and even Carlsen felt the constant questions about Kasparov had gone too far: