Vishy Anand re-entered the world Top 10 for the first time since 2019, while the youngesters continued their rise on the October FIDE rating list — 16-year-old Gukesh is now world no. 18, Vincent Keymer 2700, and Hans Niemann just 1 point short. Rapid and blitz ratings received a one-off reboot with some strange consequences: Garry Kasparov climbed 37 places in blitz without playing a game! 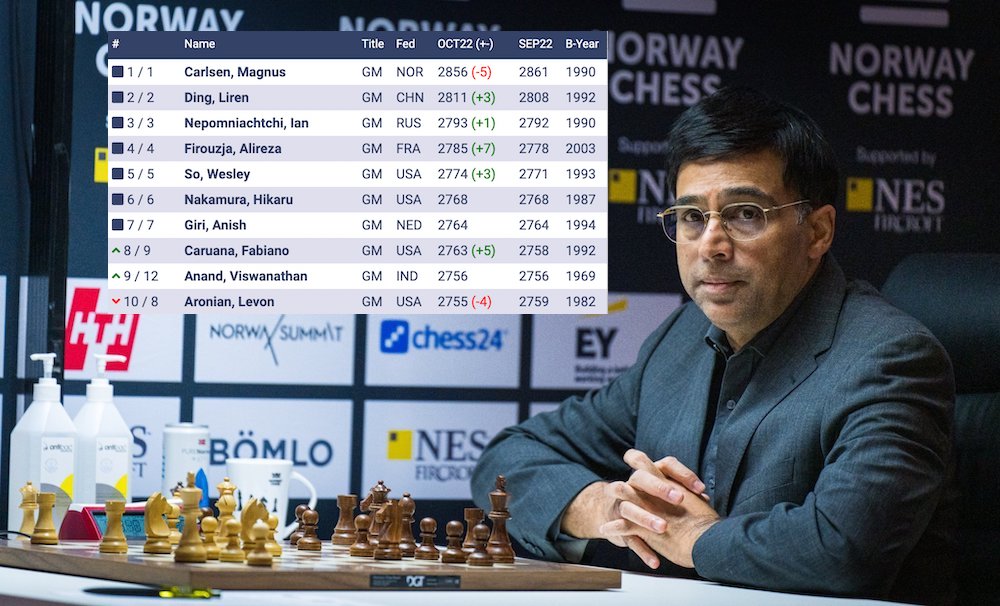 Vishy Anand is back in the Top 10 | image: Lennart Ootes & FIDE

52-year-old Vishy Anand is back in the Top 10 for the first time since November 2019. Vishy gained 5.4 rating points for an excellent Norway Chess in June, but barely played during the pandemic, with his current rating 1 point below his November 2019 mark.

He owed his new rise to world no. 9 to Levon Aronian, and particularly Shakhriyar Mamedyarov, having disappointing Sinquefield Cups.

The most eye-catching name on the top list is perhaps that of 16-year-old Gukesh, who broke into the Top 20 for the first time, climbing to world no. 18 and 2732 after winning 4 games in the Spanish League. His 19-year-old Indian colleague Arjun Erigaisi is keeping pace at no. 21 on the official list, but already 0.1 points above Gukesh on the live rating list.

17-year-old German prodigy Vincent Keymer went on a run of 5 wins in a row to reach 2700 for the first time...

...even if he cut things close by losing the last two games in the Polish League.

19-year-old Hans Niemann crossed 2700 on the live rating list when he beat Magnus Carlsen in the Sinquefield Cup...

...a game that would go on to have huge consequences. A smaller one was that in the turmoil that followed Hans dropped back to 2699, so is yet to officially reach 2700.

Nevertheless, his 11 points matched the highest gain at the top of the FIDE rating list. The other player to pick up 11 points was 17-year-old Praggnanandhaa, who is up to 2687 after finishing 3rd in the Dubai Open.

The pandemic dramatically curtailed the chances to play rated over-the-board rapid and blitz games, so that there were some glaring anomalies when it came to young prodigies. The most noteworthy was perhaps Praggnanandhaa, whose rapid rating in September 2022 was a mere 1927. 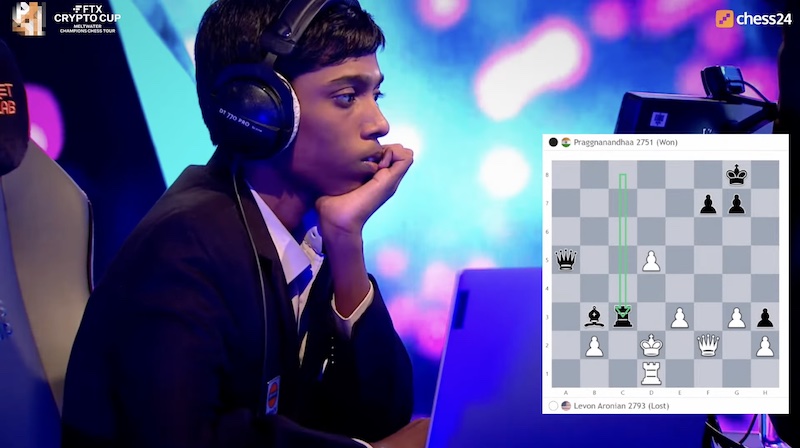 That will help normalise rating losses and gains in tournaments in which he plays, though there were perhaps unanticipated, or at least less-than-ideal, consequences.

The most notable case, however, was that of Garry Kasparov, whose blitz rating gained 68 points, to 2712, on the basis of his 2812 classical rating — a rating he’s kept despite not playing a classical game since he retired 17 years ago, on March 10, 2005. Garry had in fact had a blitz rating of 2801 in July 2021, but lost 157 points in the Croatia Grand Chess Tour blitz.

Garry is now rated the same as the player who took his crown, Vladimir Kramnik, while at the top Hikaru Nakamura just kept the no. 1 spot ahead of Alireza Firouzja, after both starred in the St. Louis Rapid & Blitz and are above 2900.

Curiously not everyone was happy to see extra points added to their rating. Ukrainian Grandmaster Mikhail Golubev commented “I NEVER asked [for] handouts!” and asked to be given the rating he’d earned by his own play.