Alexander Grischuk hasn’t been playing much of late – and is skipping the main events in the coming month – but he’s been making it count. He won $54,000 in the Doha World Rapid and Blitz Championships and took first place in the first FIDE Grand Prix in Sharjah. In a recent interview he talked about how chess isn’t “sacred” for him, how he’s turned his back on poker and why he doesn’t take an annual salary from the Russian Chess Federation. 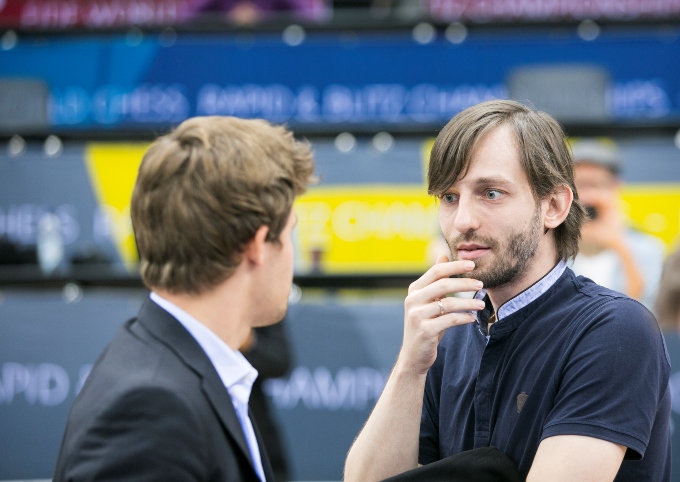 Grischuk was talking to Yury Volokhov for Soviet Sport and we’ve translated most of the interview below:

Yury Volokhov: All top chess players set themselves the goal of fighting for the crown. Is the World Championship title the goal of your whole life, or something you’re calm about?


Alexander Grischuk: It’s foolish to declare your ambitions publicly. You need to back them up with actions, and not chatter. In modern sport there’s now a fashion for making loud declarations, like “I’ll crush them all”. Perhaps that’s good for attracting sponsors, but it strikes me as foolish.

Ex-World Champion Vladimir Kramnik declared that the current Candidates cycle will be the last for him. Do you believe him?

Kramnik has been making such declarations for four cycles in a row. He already told me 13 years ago that he was about to quit. Vladimir is rated no. 4 in the world and is one of the world’s very top chess professionals. He can still play and play.

Competition has grown many times over recently and there’s a whole array of top young chess players. Do you feel that?

Of course I do. Ten years ago the competition was less. Top young chess players are appearing thanks to computers. Twenty years ago in order to grow as a chess player it was essential to have a good coach. Now you don’t really need a coach as there are special programs – just work and don’t be lazy.

To see recent tournaments by a player go to our Live Tournaments page and simply search for a player in the search bar - as you'll see, Grischuk hasn't been playing much this year!

Can you count the 27-year-old Carlsen and Karjakin among that array?

Some grandmasters express the opinion that Carlsen is a more multifaceted chess player than Kasparov. Do you agree?

Carlsen is a very strong chess player, a World Champion, but Kasparov is no. 1 for me, if you take all the chess players over the last thirty years or so.

Kasparov was considered to have a demonic effect on his opponents – they’d already be lost before the game began.

There’s no doubt he exuded a powerful energy.

Does Carlsen have such charisma?

Yes, because some strong grandmasters play much worse against him than they’re capable of doing. For example, Hikaru Nakamura has a terrible negative score against Carlsen.

What’s your score against Magnus?

I think I’ve got a small minus if you take all our games in classic, rapid and blitz. 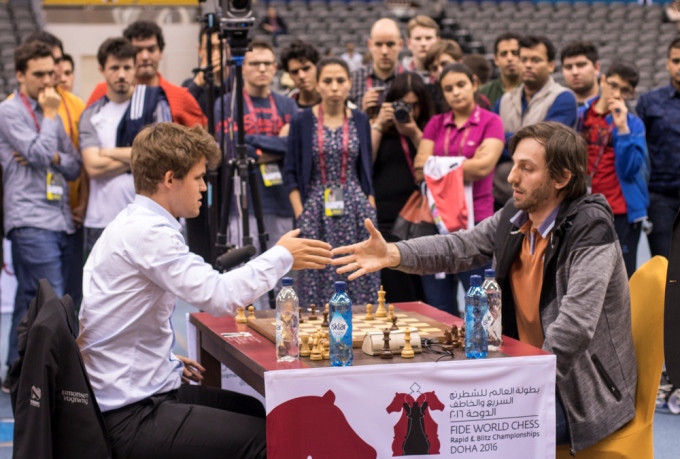 Grischuk lost to Carlsen in the Doha rapid - according to Chessgames his score is 4 losses & 1 win at classical chess against Magnus, and 24 losses and 17 wins if rapid and blitz are included | photo: Maria Emelianova, Doha Rapid and Blitz

Chess has dramatically shifted towards accelerated time controls. Do you see that as an inevitable demand of the times?

I don’t see any big changes in that regard, except that they’ve now begun to hold World Championships in rapid and blitz. For now it’s more just talking about it. I’d welcome it if there were more such tournaments.

In what sense? Chess is only a game. If your opponent is better than you and wins he hasn’t killed you, after all.

People think that it’s only at the classical time control that chess approaches a work of art, while in rapid you can’t create an immortal work.

That depends on your approach to chess. If someone thinks chess possesses some sacred meaning then I can only envy that person. Perhaps I’d also like to think like that, but I don’t. For me it’s just a game and I can’t rank it alongside, for instance, an art like music.

Talking about the reasons for your success in blitz you said that the main thing is to be able to play chess well.

That’s how it is. Take a look at who wins the World Rapid and Blitz Championships – Karjakin, Ivanchuk, Carlsen. Random people don’t win those tournaments.

A few years ago you said that poker had become your second profession. Does that statement still stand?

Not anymore. Now if you want to achieve success in poker you need to devote your whole life to it. You simply can’t turn up and play, even on the internet, since the level of players has risen so much. Therefore you could say that poker is in the past.

Are the prizes for winning top poker and chess tournaments comparable?

They’re several orders of magnitude higher in poker, but in those tournaments you need to pay a significant entry fee, while in chess you definitely won’t lose money.

In the film Rain Man the hero Dustin Hoffman memorised cards from several decks simultaneously. Did the authors exaggerate a lot?

He counted cards in blackjack, while poker is good in that memory isn’t so important. It’s in durak or preferans that you need to remember all the cards that appear.

Poker’s in the past, but meanwhile you turned down a salary for being a member of the national team.

That salary isn’t paid for sitting around idly but imposes a series of obligations. You need to agree participation in individual tournaments with the federation, you have to play in team events and go on training sessions. I wasn’t sure I’d be able to fulfil all those obligations.

Karjakin, who unlike Grischuk has very publicly declared his goal "to return the chess crown to Russia" has been tweeting from a chess training camp in Kislovodsk for the last few days

Do you play for any foreign clubs?

Strangely enough, for a club in the second division of the Bundesliga. It’s based in Baden-Baden. However, we’ve got a very strong team and excellent chances of getting into the first division, where we definitely won’t be out of place.

Not a bad 2nd division match!

In the German Championship there’s a system of rounds, where on weekends you travel to a particular city, play two games and then leave. The tournament takes half a year.

This weekend is a Bundesliga weekend, with all 128 games live here on chess24!