Magnus Carlsen and Wesley So play the Airthings Masters from February 6 till 10, as the all-new $2 million Champions Chess Tour begins. The remaining six places in the top group are open to any grandmaster, with the players battling it out on Chess.com on February 3. The Tour season will culminate in December with 8-player Playoffs and a 4-player Finals to decide who takes the online crown and a $200,000 top prize. 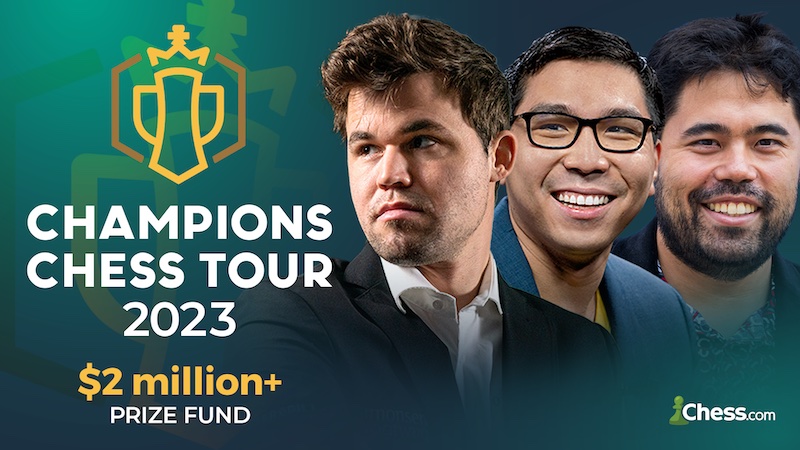 The Champions Chess Tour is back for 2023, but this time it's combined with the best of the Chess.com Global Championship and Rapid Chess Championship in a revamped format with a record prize fund of over $2 million.

The distinction between Regular and Major events is gone, with six 5-day events from February to September qualifying eight players to the Playoffs in December. The top four in the Playoffs then advance to the Finals. 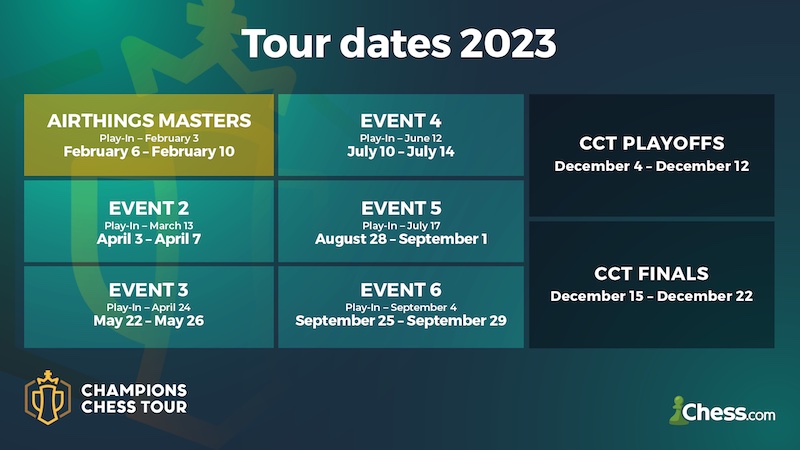 Or rather, there are just two invitations all season, with 2022 Champions Chess Tour winner Magnus Carlsen and 2022 Chess.com Global Championship winner Wesley So seeded straight through to the main event of the Airthings Masters.

The remaining six places in the top division will be decided by qualifiers, while events 2-6 will feature the Top 3 from the previous Division I and the winner of Division II, as well as four qualifiers.

Each 5-day event will feature not just a top division of eight players, but a Division II with 16 players and a Division III with 32.

Open to all titled players

From February 13th onwards there will be weekly 11-round Swiss qualifier tournaments each Monday on Chess.com. Those are open to all titled players, with the top three finishers eligible to play in the Play-In day before each Champions Chess Tour event. (This route is unavailable for the Airthings Masters.)

All grandmasters can compete in the Play-In day without the need for a qualifier. It begins with a 9-round Swiss tournament, before the top finishers will then play a single 2-game match to decide the available positions in each division. 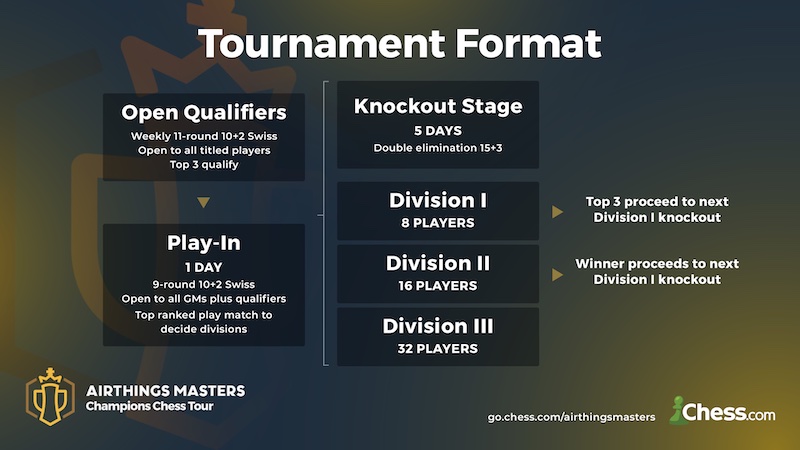 For the Airthings Masters Play-In on February 3, where six places in the top Division are up for grabs, the players who finish 1-6 in the Swiss will face the players who finish 7-12. (A twist for the top division is that the player in 1st can pick their match opponent from those ranked 7-12, with the 2nd picking from the remaining players, and so on.)

The winner of each match qualifies for Division I, the loser for Division II. A similar process will decide each position in each division.

The 5-day main events will be held as double-elimination knockouts. That means a player is only knocked out if they lose two matches. If they lose one, they drop down to a “losers” bracket, but still have a route to the final.

The matches in the winners bracket are held over four games, while in the losers bracket there are two games.

All games on the Tour will be rapid games played on Chess.com, but will also be faster than last year’s 15 minutes per player for all moves, plus a 10-second increment per move. For the qualifiers the new time control will be 10+2, while for the main events it’s 15+3.

All ties in matches are broken by a single Armageddon game, where White gets 10 minutes for the qualifiers, or 15 minutes for the main event. Who has Black, and only needs to draw, is decided by the players bidding for the lowest amount of time they’re willing to play with the black pieces. The lowest bid wins.

A record prize fund of over $2 million 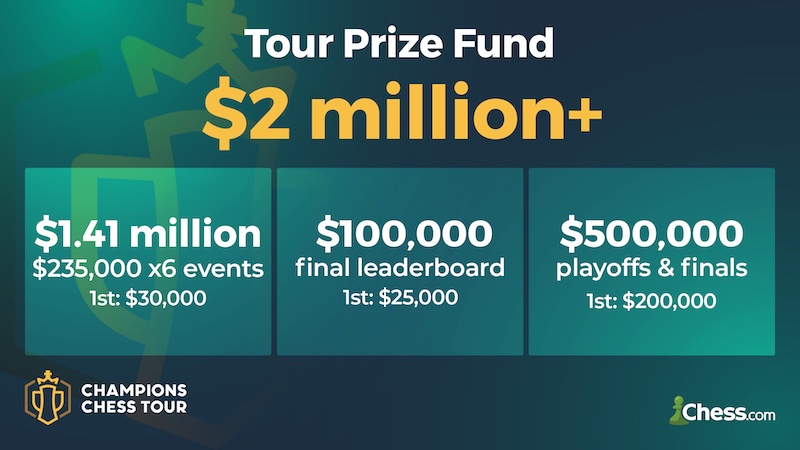 The money, and points, on offer for each of the first six events are as follows. 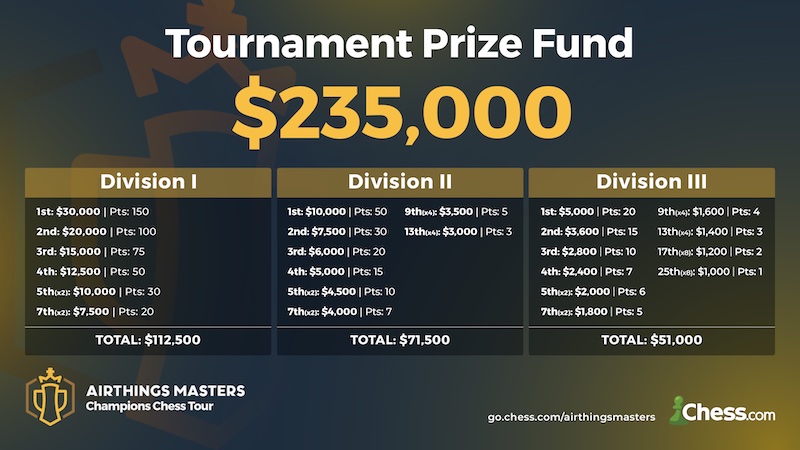 The winner of each of the six events is automatically qualified for the Playoffs, but two places — and more if anyone wins more than one event — will be decided by Tour points.

A dramatic conclusion to the Tour

If there was one valid criticism of the Champions Chess Tour for the previous two seasons it was the lack of a satisfying final event, since in both cases Magnus Carlsen was almost uncatchable. This year that changes, with all the players starting from scratch in the Playoffs.

The 8-player Playoffs will first see a round-robin, where each player competes in a 4-game match against each of their rivals. The Top 2 go to the Finals, but those in places 3-6 will then play a mini-double elimination to decide the last two spots. 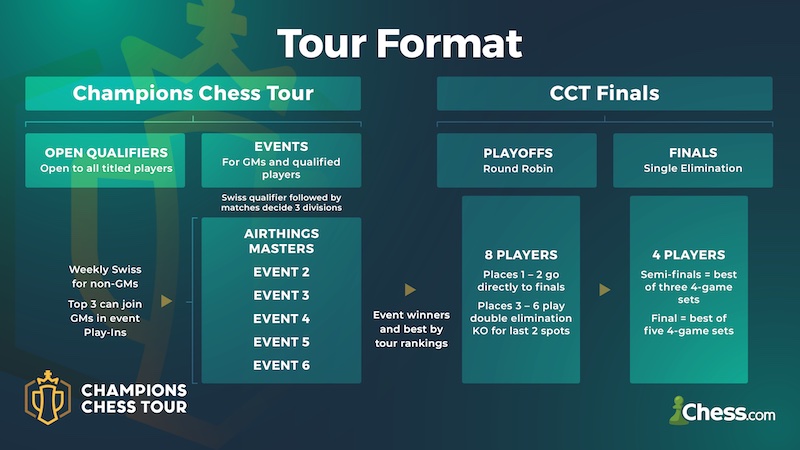 All the best players can play

This year, with the online tours unified, there's no obstacle to all the best players taking part. Hikaru Nakamura, Levon Aronian, Maxime Vachier-Lagrave, Fabiano Caruana and Anish Giri are among those who have already committed to play. 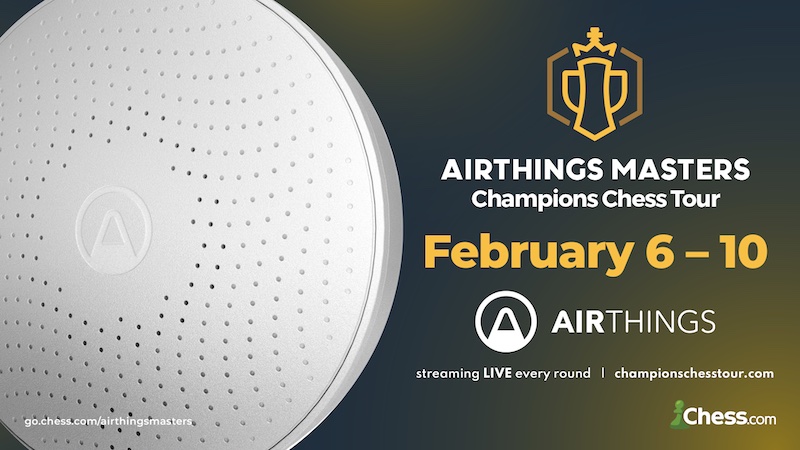 One thing that hasn’t changed is that the Tour will kick of with what’s now the 3rd edition of the Airthings Masters. Teimour Radjabov won in 2020-1...

It’s great to partner with the Champions Chess Tour for a third consecutive year, kicking off the season again with the Airthings Masters.

Chess represents a truly global community and remains one of the few universal pastimes. Similarly, air quality is such a constant in our lives that often we forget to think about it, but factors such as CO2, particulate matter, radon, temperature, and humidity have been well-documented to impact our health, well-being, and performance. We look forward to once again helping the best chess players in the world breathe better and play better.

As a fan, I can’t wait for this event! I feel like it’s the best of the Tour combined with the best of Chess.com’s Global Championship and the RCC — all in one place! Hundreds of players from around the world will compete and one will be left standing: the undisputed best online chess player in the world.

We expect the highest level of play from the top players and Chess.com will deliver the highest level of coverage we can for the fans, taking in all that was brilliant about both the Global Championship and the Meltwater Champions Chess Tour. We cannot wait to share this with the chess community. 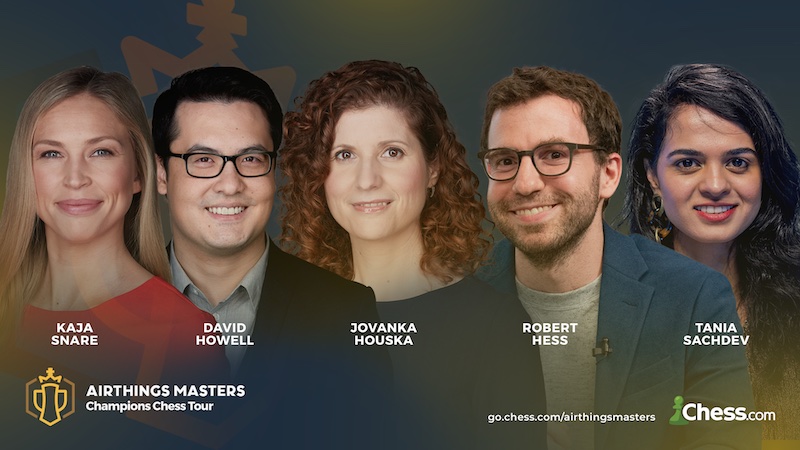