Nihal Sarin, Sethuraman, Abhijeet Gupta and Krishnan Sasikiran are all out of the Indian Qualifier for the Meltwater Champions Chess Tour after suffering surprise defeats to Arjun Erigaisi, Harsha Bharathakoti, Gukesh and Mitrabha Guha. The highlight of Saturday’s quarterfinals is Adhiban-Praggnanandhaa, after both players came through matches that were hit by technical issues. Adhiban played to the crowd by employing 1.b3, the topic of his much-hyped but still unreleased Chessable series. 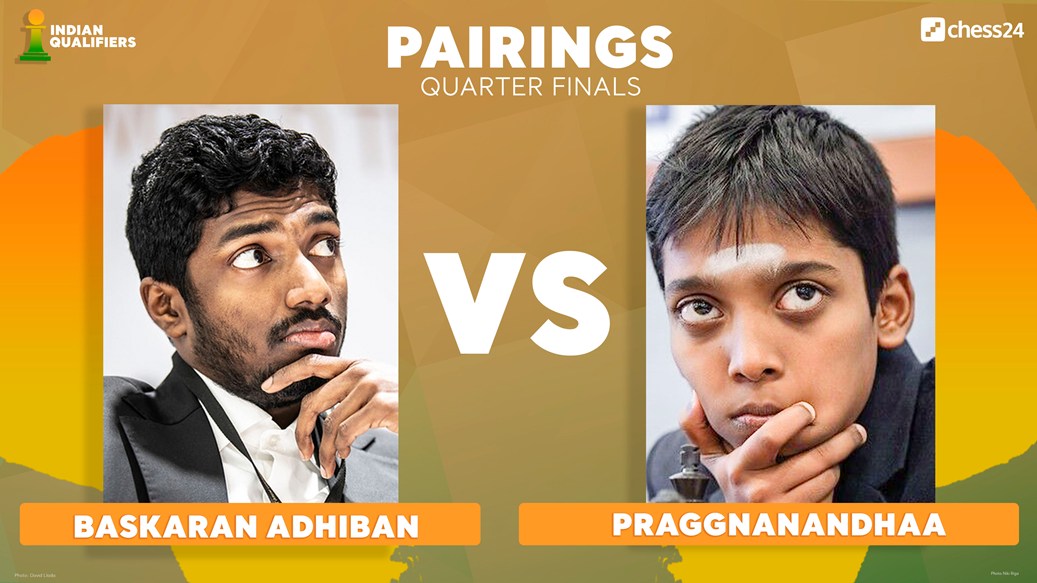 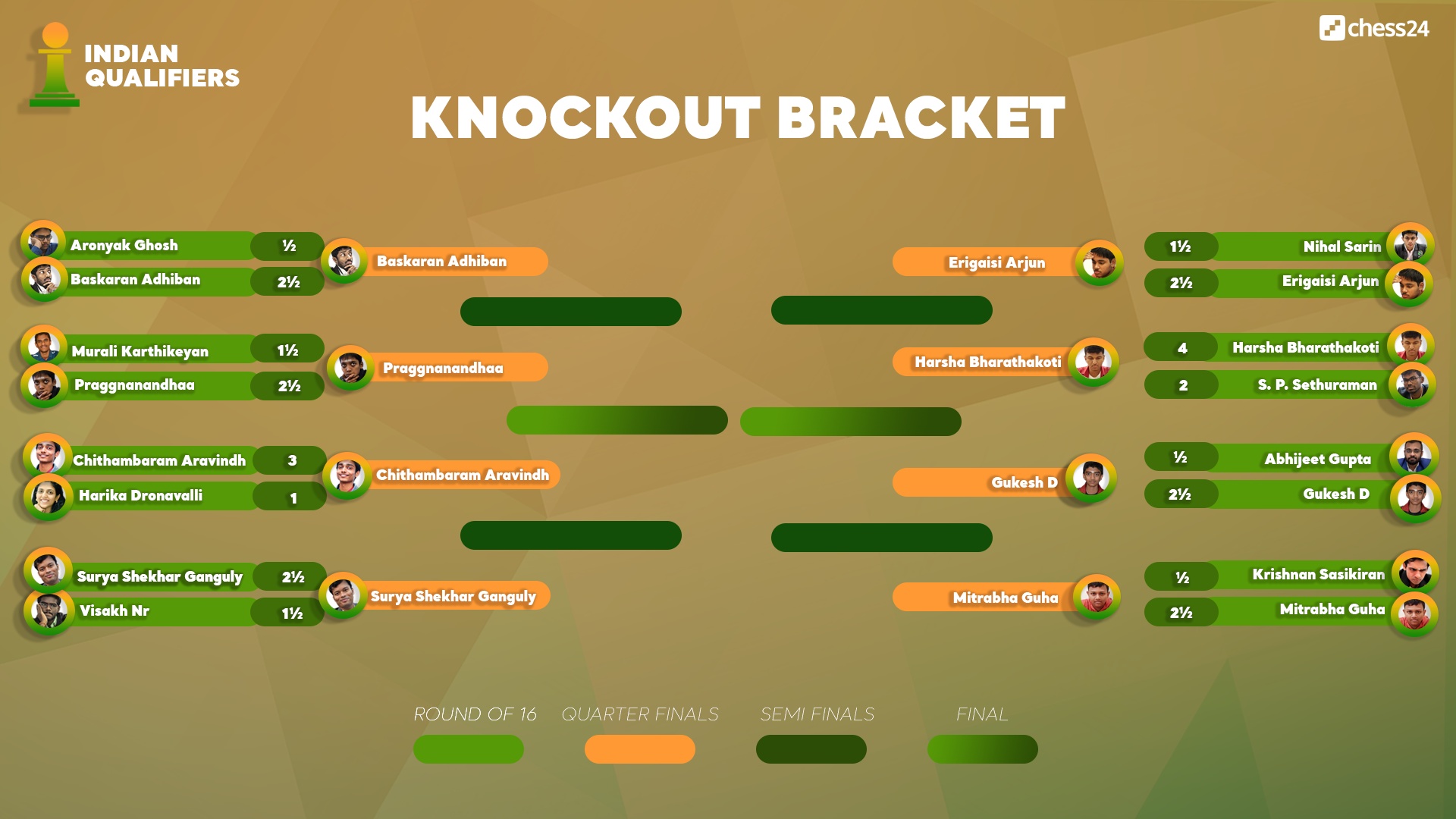 You can replay all the games using the selector below (click a result to open the game with computer analysis).

And here’s the day’s live commentary from Tania Sachdev and Srinath Narayanan.

Let’s take a look at the quarterfinals and how the players got there.

Adhiban, with a peak rating of over 2700, is the top seed for the Indian Qualifier, but the 2440 rating of his 17-year-old opponent Aronyak Ghosh should fool nobody. Aronyak came very close to winning the Vidit Chess Tour and Adhiban’s decision to sacrifice a pawn by move 4 of the first game looked risky.

8.Nc3!? (8.Ng3!) 8...d4! here was probably a mistake by Aronyak, but although Adhiban got a good position out of the opening, he was in serious danger before his opponent disconnected and lost on move 26.

The match was then effectively decided in Game 2, when Adhiban played a move he’s been talking about for months while not actually releasing his Chessable series that should reveal some tricks on how to play it!

Adhiban got a good position early on, and while the way he converted won’t be featuring in middlegame manuals anytime soon, he took a 2:0 lead. Aronyak came close to winning on demand in Game 3, but was ultimately held to a draw.

15-year-old Praggnanandhaa will be Adhiban’s opponent in the quarterfinals after a tough match against 2-time Indian Champion Karthikeyan Murali, made tougher by the fact the players have worked together on some of the same opening variations. Pragg looked set to take the lead in Game 2, but instead seemed to lose on time in a completely winning position - due to technical issues the game was declared a draw.

Pragg ultimately won the match by winning the 4th rapid game after refuting his opponent’s aggressive play and going on to win a technical endgame.

The king is heading to capture the knight on b2, which is completely trapped! 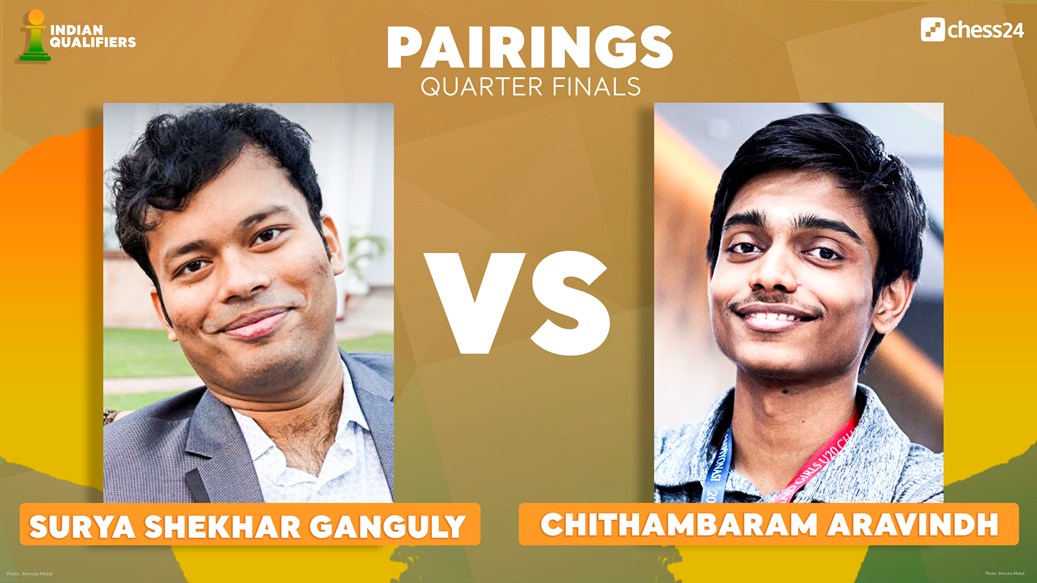 By far the oldest quarterfinal clash is between 21-year-old Aravindh and 38-year-old Ganguly. Aravindh overcame Harika Dronavalli by the unusual method of drawing both games with White and then winning convincingly with the black pieces.

Ganguly also won both games with Black, against 22-year-old Visakh, with one of those games featuring perhaps the move of the day! 22.Rxg3? allowed 22…Rxg3 23.Nxg3 and then the killer:

Visakh played on with 24.Re3, but after Ganguly withdrew his queen to g6 he was a pawn up with a continuing attack. He went on to win comfortably, and although Visakh won one game with Black of his own it wasn’t enough. 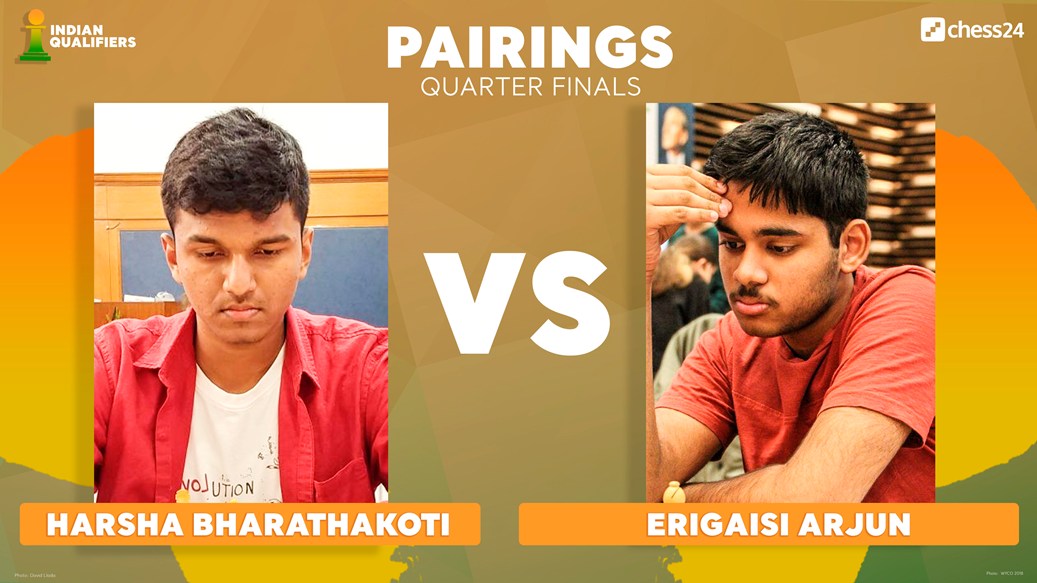 17-year-old Arjun Erigaisi is another Indian name we may need to learn.

He got to the semi-finals of the Vidit Chess Tour and here managed to knock out a star already established on the international stage, 16-year-old Nihal Sarin. Arjun’s choice of the Sicilian Dragon in Game 1 seemed to come as a surprise, not only to Nihal...

...and Nihal’s modest reaction ran into trouble. 14…Nxe4! was a good move…

…but falling into the tactical point and at least eliminating the d-pawn with 15.Rxe4 d5 16.Bxd5 appears to be much better than Nihal’s choice of 15.Bxf7+? Rxf7 16.Rxe4, when 16…d5! gave Black a fast-running passed pawn and a huge positional advantage.

Losing the first game still left Nihal with three games to recover, but in fact it was his opponent who was much closer to increasing his lead in the draws that followed.

Erigaisi’s quarterfinal opponent is 21-year-old Harsha Bharahakoti, whose match against Indian no. 6 Sethuraman was the only one to extend beyond the rapid games. After Sethuraman was unable to convert an extra pawn in a 95-move first game, Harsha took the lead in Game 2, only for Sethuraman to win Game 4 on demand to force a playoff.

It was in the first 5+3 blitz game that Harsha really shone, seizing on his opponent’s mistake to launch a whirlwind attack that he finished in style.

Sethuraman then had to win on demand with the black pieces, but it was Harsha who controlled the game before again ending with a mating attack. 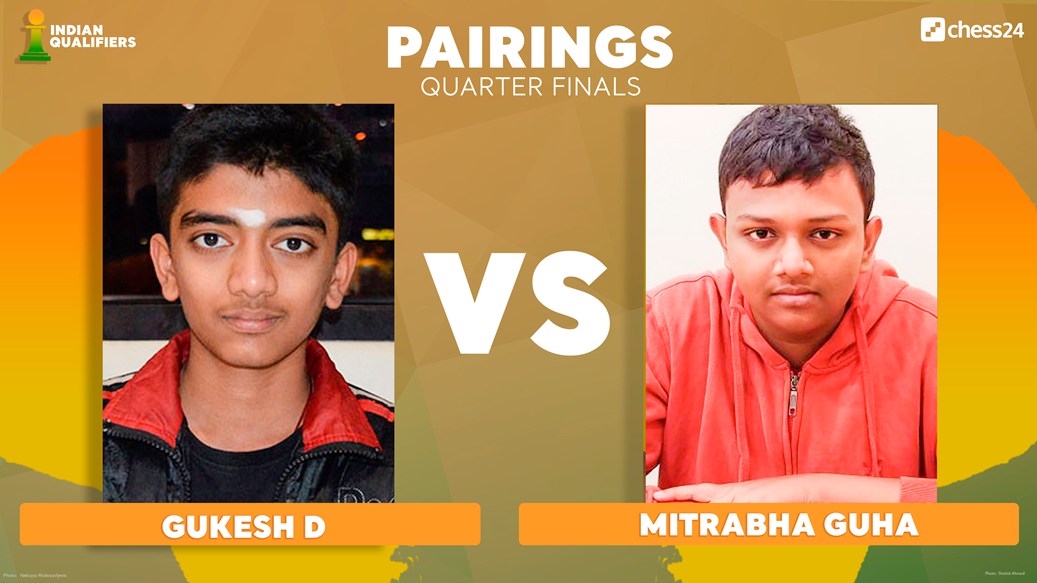 14-year-old Gukesh beating 31-year-old Indian no. 11 Abhijeet Gupta was formally an upset, but Gukesh, who became the 2nd youngest grandmaster in history, is one player everyone expects to see near the very top of world chess in the coming years. Earlier this year he won the Vidit Chess Tour, gaining experience playing online.

Against Gupta he had to defend a tricky ending for 71 moves, but in Game 2 Gukesh was completely winning in 16 moves, with 18.Nxe6! ending the contest.

In the next game Gupta was already worse with the white pieces when he played 46.Nxb7?

Of the many ways to punish that pawn grab, Gukesh picked the simplest: 46…Rxb7! 47.Qxb7 Ne2+ and never looked back as he went on to win the game and match.

Gukesh will now face 19-year-old Mitrabha Guha, who knocked out 40-year-old Indian no. 5 Krishnan Sasikiran. In the first game Mitrabha played the Winawer French and survived the opening to eventually take over in the middlegame.

Krishnan managed to hit back after getting a winning position by move 14 in Game 3, but Mitrabha ground out a win in a tricky ending in Game 4 to take the match.