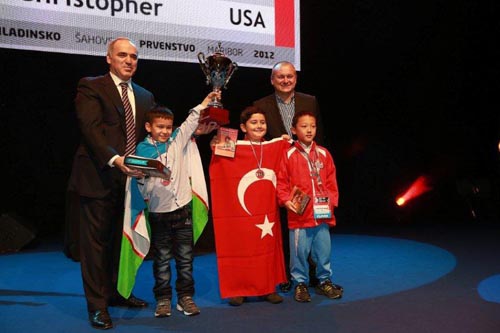 Following in the footsteps of legends? Garry Kasparov was on hand when Abdusattorov picked up the trophy as World U8 Youth Champion in 2012 | photo: wycc2012.com

Remember, if you can, the name Nodirbek Abdusattorov. At the age of only nine the young Uzbek defeated two grandmasters in the Tashkent Open last week, making the 2012 World Youth U8 Champion his country's best hope for a world-class star since Rustam Kasimdzhanov emerged in the early 90s. IM David Martínez takes a look at how the prodigy claimed his grandmaster scalps.

Abdussatorov is enjoying an extraordinary tournament in his home city of Tashkent, Uzbekistan. Let’s take a look at his performance round by round.

2057-rated Abdusattorov started the tournament with a stunning 3/3, sweeping aside two grandmasters and one international master. He hasn't quite managed to maintain that incredible level since, but his performance rating so far is still 2514. Perhaps a record for a 9-year-old boy? 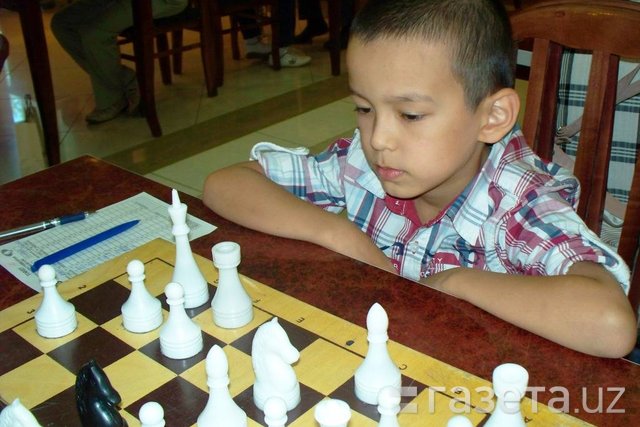 Let’s look at the crucial moments from his victories against the grandmasters.

Both games started with the Closed Sicilian, one of the most interesting ways to counter the Sicilian that you can teach to children. The system is easy to implement but also allows different attacking plans and the chance to get to grips with a variety of structures.

A complex position where Abdusattorov needs to find a plan - and he finds a good one! You want to play f4 but that's not possible while the knight would be hanging after exf4 and recapturing the pawn… so let’s return to the knight.

20. ♘f3! ♖b8 21. ♘fd2 Black’s position gets a generous -0.27 from Houdini, meaning it actually prefers Black. That's a typical computer error, however. It looks at the short-term situation (the half-open file and good central control) but fails to appreciate the factors that will be decisive. What’s the plan? Am I going to get mated while I collect the harvest on the queenside?

22. f4 ♗h6 Zhigalko probably had real doubts about whether to play this move now or first include the exchange on f4 in order to win the e5-square for the knight.

23. f5 ♗d7⁈ Once again a difficult move to make, as the bishop is clearly worse than the knight. It's possible Zhigalko played it because he couldn't work out the complications after the exchange sacrifice that might follow 23... Bxc4 24. Nxc4, or perhaps he simply preferred to keep pieces on the board with the idea of complicating the game at the right moment.

23... ♗xc4 is the normal continuation as the bishop is by no means better than the knight, and given White's potential it's better to exchange pieces! But 24. ♘xc4 would have been brilliant and I really hope it was Abdusattorov's idea. The exchange sacrifice is very dangerous and Black only holds with precise play. (24. ♖xc4 ♘b4 and due to the threat of d3 White needs to move the knight from d2 - taking it further away from its ideal position on c4! You can see for yourself that the obvious choices are Nb3 and Nf3, although you might also come up with 25. ♕e2? when Black would respond with 25... ♕g5 26. ♖f2 ♕e3 and a decisive advantage.) 24... ♗xc1 25. ♕xc1 ♔h7 Preventing Qh6. 26. f6 White's plan is Qg5 followed by a bishop sacrifice on h5 or f5. The g4-break is also a good option. The correct black defence seems to be the prophylactic 26... ♖h8! retaining the option of playing both Kg8 and Qf8-h6, blocking the white threats.

24. ♕e2 Both on this move and the next Abdusattorov demonstrates an astonishing calmness in attack (which we also see in the next game). With 24. Qe2 White somewhat improves the position of his queen, connects the rooks and, for the moment, doesn't force events.

26. ♗h3! hxg3 27. hxg3 g5 A very ugly positional move with which Zhigalko makes an enormous concession, no doubt fearing White's attack - and I understand him!

28. ♔g2 With no tension in the structure and a closed position it's now time to manoeuvre. 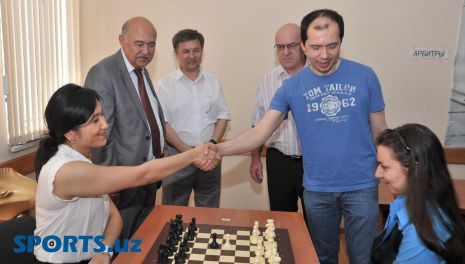 Can Abdusattorov emulate 2004 FIDE World Champion Rustam Kasimdzhanov, who was a guest of honour at the start of the tournament | photo: Sport.uz

36. ♕xf5 ♘xf5 37. ♘xc6 g4 38. ♗xg4 ♗xd2 39. ♗xf5 ♗xc1 40. ♘xb8 ♖xb8 41. ♖h7+ ♔g8 42. ♖d7 Although the presence of opposite-coloured bishops and the diminuitive size of his opponent inspired Zhigalko to play on for another 22 moves the ending is completely lost. All the black pawns are weak, the white bishop will control everything from c4 and the king can also put in an appearance on g6. Having said all that, feel free to play through the moves if you want to enjoy the slaughter!

His second victory against a grandmaster was even more violent.

A position typical of the Closed Sicilian - one of the most interesting ways you can teach children to approach the Sicilian. The opening combines straightforward attacking plans with a chance to gain an understanding of different structures.

23. ♕h5 Nodirbek switches the queen to start an attack on the king.

23... ♗c8? Khusnutdinov trusts that he'll have time to regroup his pieces, but that's not the case.

23... exf4 is Houdini's recommendation. It gives the following variation: 24. ♗xg7 ♔xg7 25. gxf4 and claims that White only has a slight advantage... Without wanting to contradict an inanimate object I'd say that from a human point of view opening the g-file by exchanging on f4 and then taking on g7 with the king reminds me of the innocent victim Ben McLemore abandoned by his team as Rey Lebron James approached...

24. ♘d5! Exploiting the fact that the bishop has abandoned the protection of this square for a moment.

24... ♘xd5 25. ♗xd5 ♗b7 Khusnutdinov (a name I hope I spelled correctly the first time as I'm now just using copy and paste...) relies on exchanging the bishop and holding the position, but his pieces will end up very awkwardly placed whilst White's coordinate perfectly.

26... ♖f6 27. ♔g1 A quiet move that tries to avoid tricks along the long diagonal. Although it's not strictly necessary it still maintains the advantage since Black has zero coordination.

32. ♖xf5 ♖xf5 33. ♕xf5 Abdusattorov not only has a decisive attack but also an extra pawn, making what follows truly child's play (pun intended!).

It takes a while to learn, but it's a name not to forget - Nodirbek Abdusattorov. It looks like we'll be hearing a lot more about him in future. 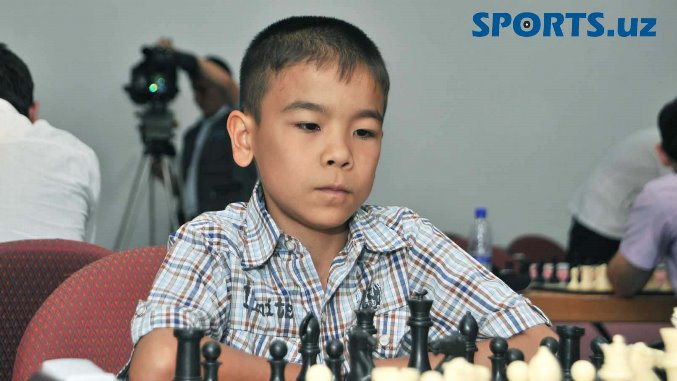 And Nodirbek isn't even alone! 11-year-old Shamsiddin Vokhidov is another local star. In Round 1 he defeated 2613-rated Armenian Grandmaster Robert Hovhannisyan | photo: Sports.uz