70th Anniversary of the USA vs. USSR Radio Match

These days we take it for granted that moves from games played far away are transmitted nearly instantaneously all over the world. Playing online has also never been easier. But 70 years ago, a historic match was played via telegraph between the USA and the USSR, allies marking the end of the Second World War. 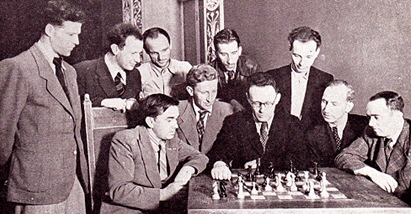 The photo above is of the victorious Soviet team, and is reproduced online in a variety of places. I was unable to find the original source, but would be glad to hear from any readers who may know, in the comments.

The Soviet team led by future World Champion Mikhail Botvinnik, trounced their American rivals 15½–4½, in the 10-board, two-game match held between September 1 and 4, 1945, just two weeks after the surrender of Japan ended the war. In fact it was the first international sports event since the outbreak of the conflict.

Here were the individual results:

Nowadays it's hard to picture what it meant to play a match via telegraph, so this two minute video clip (with Russian voice over) is worth a look, despite the low-res, grainy 1940s newsreel quality. (H/T: John Henderson, 1stMove.org):

Botvinnik and the Soviet team can be seen in action during the match, with assistants running back and forth carrying moves between the chess board and the telegraph room. Each move took several minutes to be transferred across the Atlantic, so the longest games stretched for many more hours than your typical over-the-board contest.

Download all games in PGN, and try them out in our new Analysis & Coaching area.
Or upload your own annotations in Community.

The American team played in a hotel in New York, and the match was widely publicized with live commentary provided for hundreds of spectators each day. Similar numbers were seen in Moscow, and film from the match was also sent to cinemas across the country.

In the second half of the match USA second board Sammy Reshevsky was caught up in opening preparation by Vasily Smyslov, but managed to battle back with a well-timed exchange sacrifice, until the players reached this position:

Reshevsky vs. Smyslov, position after 38...Qg6

Here, 39.Nb7 would have retained chances for White, with a strong bishop pair and an extra pawn for the exchange, but Reshevsky committed a fatal error, playing 39.Ne4? when after 39...Bxe4, freeing the c2 square for Black's knight, White was forced to trade queens and concede the d-pawn.

At the time, the USA was the global leader of the sport, having won the prior four Chess Olympiads in the 1930s, so the overwhelming defeat at the hands of the upstart Soviet squad was rather shocking, and heralded a changing of the guard. Botvinnik became World Champion in 1948 and the USSR went on to dominate international chess for the remainder of the 20th Century.