Unfortunately for young Indian star Vidit Santosh Gujrathi, Round 6 of the 2015 Lake Sevan tournament will go down in chess history for an incredible blunder. The 20-year-old reigning champion was close to winning and had 17 minutes left on his clock when he shuffled his king’s rook a few squares forward – walking into mate-in-1! If it’s any consolation, the likes of Vladimir Kramnik, Nigel Short and Vassily Ivanchuk have been there before him. We take a look at some of those moments that prove even top grandmasters are human. 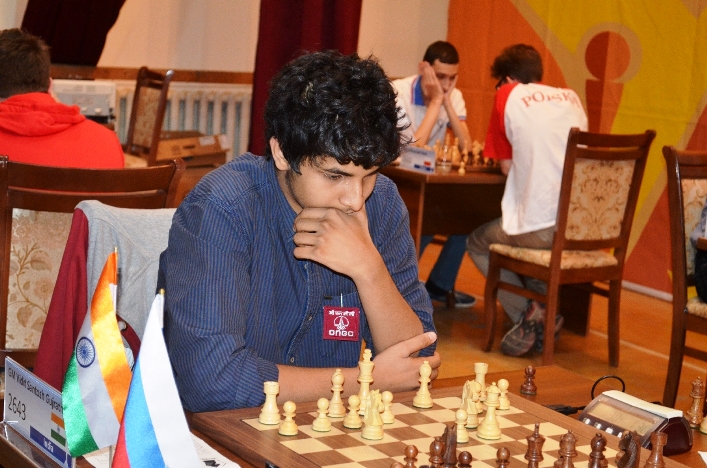 Vidit Santosh Gujrathi in Round 1 - his later executioner, Robert Hovhannisyan, can be seen with his hands on his face in the background | photo: Lake Sevan official website

Santosh Gujrathi Vidit is 20 years old, 2643-rated and already no. 4 on the Indian rating list, behind only Vishy Anand, Pentala Harikrishna and Parimarjan Negi. He also won the 2014 edition of the Lake Sevan tournament with 6/9, half a point clear of a field full of future stars. We all have our bad days, though, and this one was spectacularly bad for the young Indian.

After some creative opening play Vidit, with the white pieces, was doing very well. The Stockfish chess engine recommends 21.Na5, Rc2 or Qc2, in that order, but even the simple 21.Qe2 would give White a safe edge.

Vidit was a little short on time, but still had over 20 minutes and a 30 second increment to be added on each move. He thought for 5 minutes and 1 second before making one creative attacking move too far: 21.Rh3???? (add as many question marks as take your fancy!). Armenia’s Robert Hovhannisyan spent 26 seconds – where’s a livestream of the games when you need it? – before ending the encounter with 21…Qf1 mate.

It was a slightly unusual mating net with that pawn on c3 cutting off the king’s escape, but essentially it was one of those inexplicable moments. As this is the 21st century we got to see the player’s response immediately on Twitter:

You can replay the full game and all the others from Lake Sevan by using the selector below – don’t miss some more wild swings in Artemiev – Gabuzyan and another supreme effort by 17-year-old JK Duda, who now leads with a 2804 performance rating.

Vidit isn’t the only chess player to have blundered mate-in-one with time to burn... 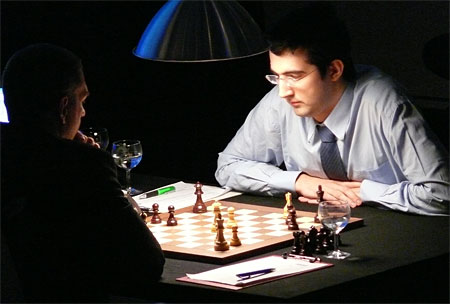 Kramnik contemplates the move that became one of his less desirable claims to chess immortality | photo: ChessBase

Back in the blissful days when the world’s best humans could still compete with our computer overlords, World Champion Vladimir Kramnik took on the Deep Fritz chess engine in a 6-game match. After a draw in the first game it was Kramnik who was pressing for a win with the black pieces. By move 34 the computer had neutralised the threats and we seemed to be heading for another draw. Then, with 30 minutes left on his clock, Vladimir demonstrated one of the qualities that separates us from machines – our boundless capacity to blunder.

34…Qe3???? Kramnik was about to wander off, but he was stopped in his tracks when the no doubt somewhat apologetic computer operator performed the move 35.Qh7 mate. Oh, the humanity!

As a rule, blitz or rapid games aren’t fair game here, since absolutely anything can happen in deep time trouble. For instance, we can be pretty sure 15-year-old Magnus Carlsen and Merab Gagunashvili were bashing out moves in a hurry when this position was reached on move 65 during the 2006 World Blitz Championship:

The future World Champion played 65.e5? (one question mark will do for a time scramble!), which of course ran into 65…Rc1 mate. 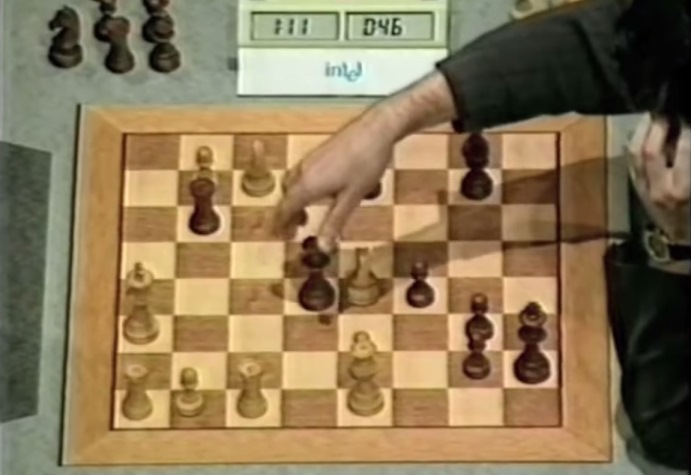 Ivanchuk picks up the right piece... but it doesn't swoop down to h1!

We need to make one exception, though, since we simply can’t exclude the 5-minute blitz game where chess genius (chess24 readers can’t be wrong!) Vassily Ivanchuk simply needed to play the final move of a brilliant attack against Vishy Anand:

He can, of course, take the rook on h1 and end the game, and he had 1 minute and 13 seconds to see it. Instead he chose 29…Qf4+??? (one question mark removed since it was blitz!) and ultimately went on to lose on time. Watch the incredible game with commentary by GMs Daniel King and Maurice Ashley (if you just want to watch the non-mate-in-1 moment fast forward to about 7:30):

There was at least a happy ending for Chucky, though. A draw in the next game was enough for him to defeat Anand and win the London Grand Prix.

Here we have another World Champion, Georgia’s Maia Chiburdanidze, who held the women’s crown for 13 years from 1978-91. She was a trailblazer for women’s chess and one of the first players who also shone against male opposition. In 1985 she won the Banja Luka tournament with 8.5/13, finishing ahead of the likes of Lev Psakhis and… Nigel Short. 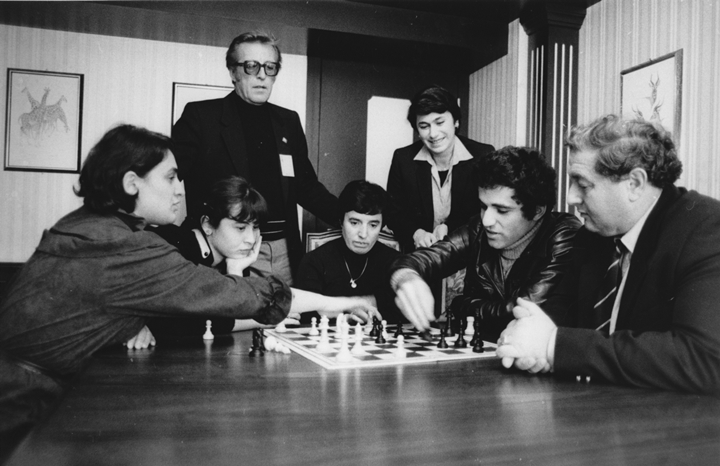 Chiburdanidze analysing with Kasparov at the 1982 Olympiad in Lucerne | photo: Kasparov 2014 website

Nigel had been crushed by Chiburdanidze when he had the black pieces two years’ previously in Dortmund, and now in 1985 he was under pressure with White, although it was nothing terminal:

This isn’t quite a mate-in-one, but it’s hard to beat for historical importance and came to people’s minds after Vidit’s mistake. Russia’s Mikhail Chigorin was matching the first official World Chess Champion Wilhelm Steinitz all the way in their second World Championship match, with the scores tied at 10:10 (8 wins each) after 20 games. The winner was set to be the first player to reach 10 wins.

Game 21 was drawn, Game 22 saw Chigorin blunder a pawn early on to give Steinitz a 9th win, but in the 23rd game things were going his way:

Chigorin, playing White, would have been on course to level the match at 9 wins apiece after 32.Rxb7. Instead he attacked a black rook (and left the h2-square undefended) with 32…Bb4????. Steinitz retained the title with 32…Rxh2+, since it would be mate next move. Chigorin never did become World Champion.

That blunder was so bad it had the dubious honour of winning first place in Jan Gustafsson's Top 10 Blunders in World Chess Championship History:

That’s all for our five incredible missed checkmates – what else should we have included on the list?