Mariya Muzychuk today has the white pieces as she attempts to hold on to the Women’s World Championship in a 10-game match against women’s no. 1 Hou Yifan. The showdown is taking place in Mariya’s home city of Lviv, Ukraine, and although she’s a big underdog her recent climb on the ranking list to women’s no. 4 suggests she’s ready to put up a fierce fight. 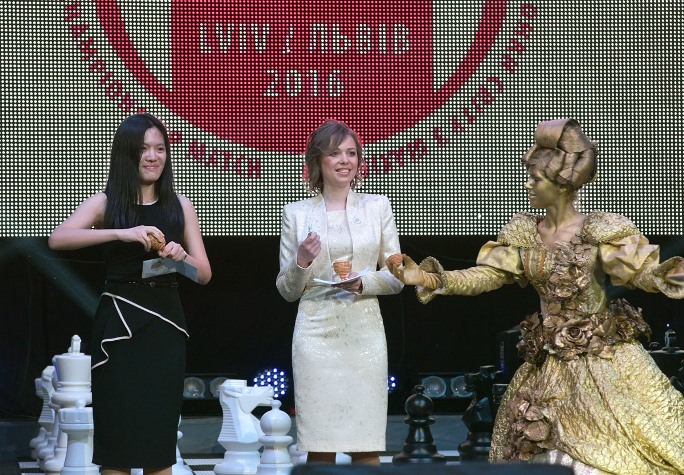 The players' clothes at the opening ceremony were perfectly colour-coordinated with the pieces for their first game today | photo: official website

The final pieces are in place. At a lavish opening ceremony in Lviv’s beautiful Opera House on Tuesday Hou Yifan picked Black for the first game of the contest. 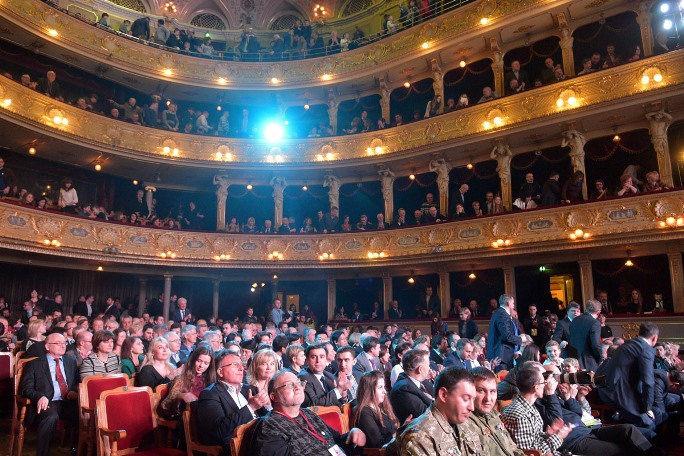 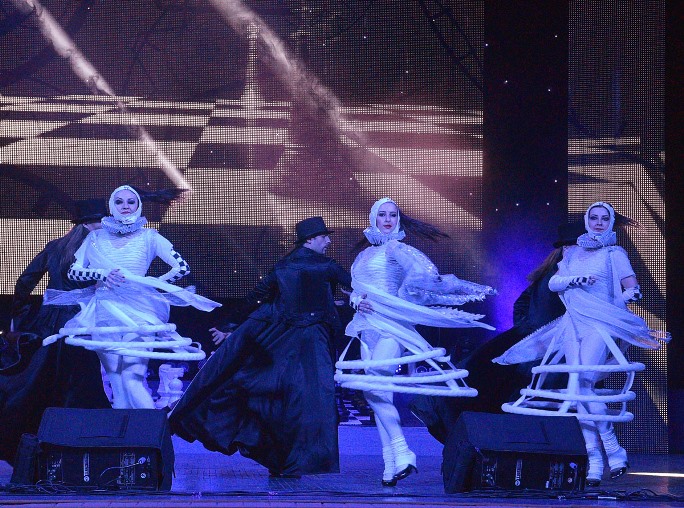 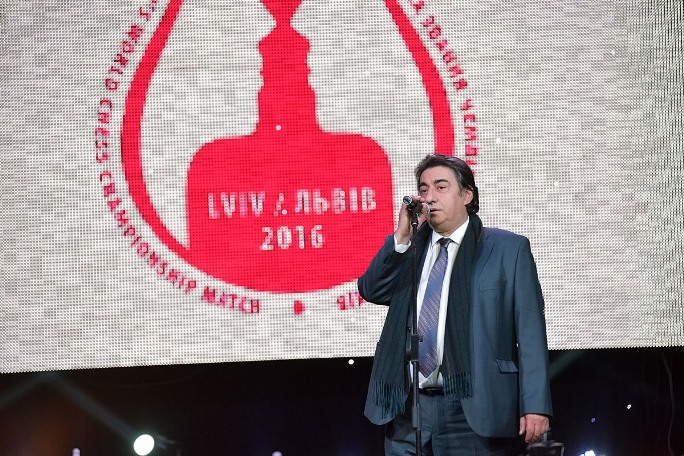 FIDE Deputy President Georgios Makropoulos made one of the speeches, with Australian GM Ian Rogers tweeting, "Women's World Championship match in Lviv between Hou Yifan and Mariya Muzychuk opens with spectacular ceremony... and speeches only by men" | photo: official website

The action starts at 15:00 local time (14:00 CET) in Potocki Palace, with all the games live on the official website and here on chess24.

Mariya with her crown and trophy at the closing ceremony | photo: Anastasia Karlovich, World Championship website

22-year-old Hou Yifan gave up her title without a fight after that rescheduled tournament clashed with an exhibition tournament in Hawaii. She’s been here before, though, needing to beat Anna Ushenina (5.5:1.5) to regain the title in 2013. She also has vast experience, first claiming the women’s crown in 2010 at the age of 16 and then going on to defend her title in a match against Humpy Koneru in 2011 (5.5:2.5). 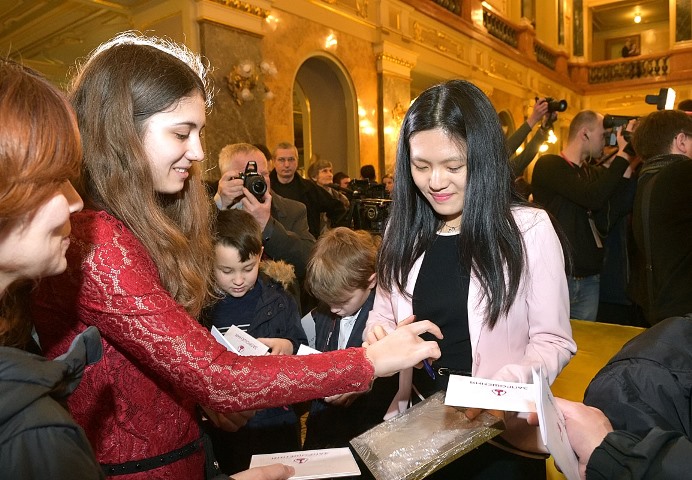 There was a clamour to get the autograph of the world's best female player | photo: official website

Can Mariya cause an upset?

The task facing Mariya Muzychuk can hardly be underestimated, as a comparison of the players’ ratings shows: 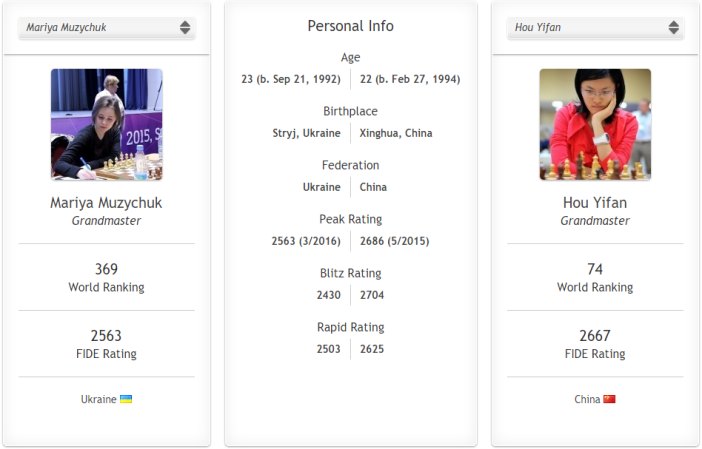 Check out the Head to Head on our interactive page, where you can quickly compare most top players

Only half a dozen players in the world are younger and higher rated than Hou Yifan, who is knocking on the door of the 2700 club and operating at heights only Judit Polgar has reached before among female players. Mariya Muzychuk, meanwhile, is rated 104 points and 295 places lower on the ranking list.

Their head-to-head record also speaks in Hou Yifan’s favour, with one draw and two wins for Hou Yifan, in Gibraltar in 2012 and most recently in the Women’s Grand Prix in Monte Carlo in 2015:

The surprise there, though, is how rarely the players have met, the main reason for which is that Mariya has only recently broken through as one of the very best female players. That progress suggests she may still be underrated, with Russian Women’s Team Coach Sergei Rublevsky telling RSport the match may be closer than many predict:

I think Mariya has chances, and they’re perfectly normal ones. Of course there’s a big rating gap, but Muzychuk is clearly on the rise and it’s already obvious today that at the current moment in time she’s the main challenger. She’s improving game by game, which was particularly visible in the European Team Championship, when she simply ran away with first board. She’s playing extremely confidently, so I put the Chinese player’s chances in the region of 60:40, but not more. 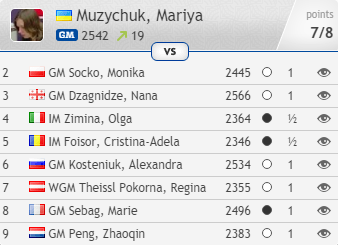 How serious the Ukrainian team is taking the match was also visible in one of the stranger chess episodes of recent years – the hiding of the moves of Mariya’s games from the 2015 Ukrainian Championship. She finished with a respectable but unspectacular 8 draws and 3 losses against her 11 male opponents. 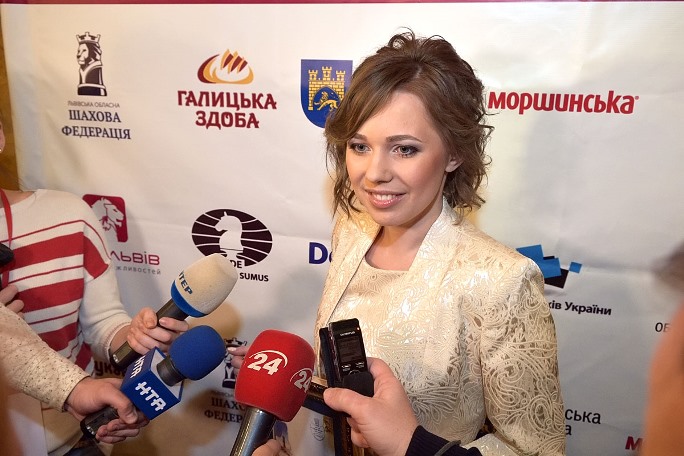 How will Mariya handle the pressure and media interest of playing on home soil? | photo: official website

That couldn’t compare with Hou Yifan in the 2016 Tata Steel Masters (draws with Karjakin, So, Ding Liren, Caruana and Wei Yi and a win over Navara in her first six games!), but no doubt Mariya drew conclusions for the challenge ahead.

To get into the mood for the match here’s a great infographic put together by the Ukrainian chess website shakhi.ukr, reproduced with their permission: