18-year-old Alexey Sarana went into the rest day of the 2018 Russian Higher League on 4.5/5, a full point ahead of 11 players who included former European Champions Ernesto Inarkiev and Alexander Motylev. In total the formidable field includes five former European Champions (Vladimir Potkin, Maxim Matlakov and Evgeniy Najer are the others), all fighting to gain one of the five qualifying places in the Russian Championship Superfinal later this year. The women’s event was led by Elena Tomilova.

Sarana got off to a flying start in the 2018 Higher League | photo: Russian Chess Federation

…but Yaroslavl, 250km northeast of Moscow, is not one of them. In chess terms, however, the Higher League of the Russian Championship – a qualifying tournament for the main event – is always worth a look, since Russia has so much more chess talent than can take part in its national chess championship.

Every game is being broadcast (with a 15-minute delay), and you can play through them all using the selector below:

It’s particularly tough for young Russian players, who in other countries, as rising stars, could expect automatic invitations.That's not the case in Russia, but at least one of them, Alexey Sarana, is currently on course to qualify. The 18-year-old had a tough time in the Russian Team Championship, but otherwise is having a fine year. He finished 22nd in the European Chess Championship to earn a place in the 2019 World Cup and scored an unbeaten +2 in classical chess for Russia in their recent match against China. He’s been on fire in the Ring Premier Hotel in Yaroslavl: 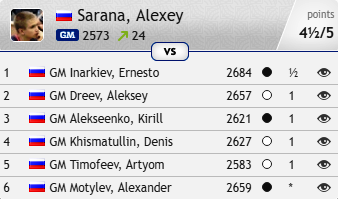 His winning run began against the hugely experienced Aleksey Dreev, who won a pawn with a kingside attack only to find himself undeveloped on the queenside. Perhaps he underestimated the danger, since 23…Bc7? was already a losing move (23…Bd7! and Black is worse but has good chances of holding):

Sarana followed that up with a crushing attacking win against 21-year-old Kirill Alekseenko in the next round. First he broke with 22…f5!, then later it was time to sacrifice the e-pawn to gain the e5-square for his knights:

His next two opponents played the Berlin Defence, but the outcome was the same.

Sarana’s Round 6 opponent is Alexander Motylev, who got to play one of the most dramatic games of the event so far. Valery Sviridov’s 23.Bd3? (23.Re1!) allowed Motylev to demonstrate his beautiful idea:

Alexander Motylev is one of the many former European Champions on show | photo: Russian Chess Federation

Reigning Russian Women’s Champion Aleksandra Goryachkina and also Olga Girya have no need to qualify for this year’s Women’s Championship, so have decided to play the open event instead. Olga is on 50%, while Aleksandra is doing even better after a fine win over Evgeny Alekseev in Round 1:

After 34.Qe2! Rg7 35.Qxe8+ Qxe8 36.Rxg7 the rooks vs. queen battle should probably have ended in a draw, but Aleksandra managed to squeeze out a win against her 122-point higher rated opponent.

Can the Russian Women's Champion Aleksandra Goryachkina give herself a dilemma by qualifying for the Open Championship as well? | photo: Russian Chess Federation

Meanwhile the separate women’s section also had a sole leader on 4.5/5 - Elena Tomilova, who started with 4 wins in a row.

You can replay all those games below:

We haven't played through all the games from both events, but it’s a fair bet that the prize for blunder of the tournament goes to FM Dmitrij Rodin. Playing Black here he had 20 minutes to GM Sergei Iskusnykh’s two, and a won position. Alas, he found a very quick way to lose it!