14 games in the 2020 World Championship match

The World Chess Federation (FIDE) today announced that the 2020 World Championship match between Magnus Carlsen and the winner of the next Candidates Tournament will be fought over 14 games rather than 12, with the minimum prize fund doubled from 1 to 2 million euros. The time available to the players is unchanged, but increments have been removed before move 61. There will also be no draw offers allowed until move 40. 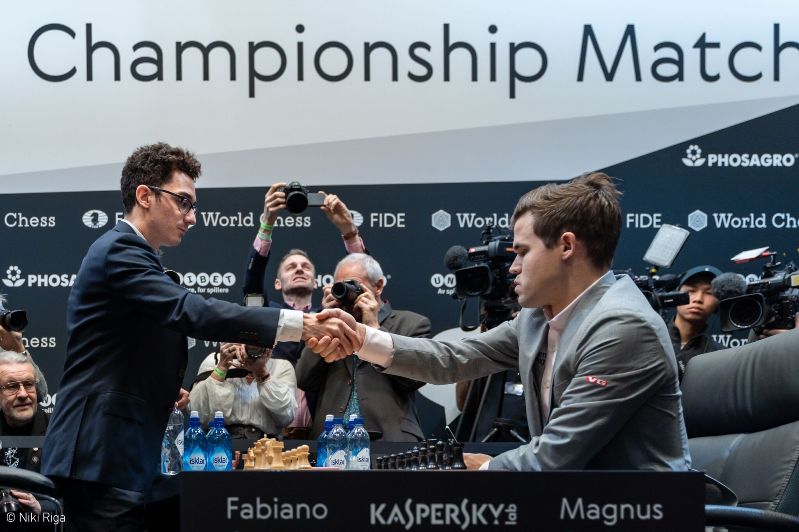 Game 12 of Carlsen-Caruana would be a great fight, but it was still a 12th draw in a row | photo: Niki Riga

The 12 draws in the 2018 World Championship match sparked heated discussion about what, if anything, needed to be changed.

The arrival of FIDE President Arkady Dvorkovich and a new team meant everything was up for discussion, with World Champion Magnus Carlsen himself coming up with some bold suggestions:

In the full interview Magnus elaborated on his preferred format:

My current favourite, which it has been for a while, is to keep the same format as now, except that each day you play 4 rapid games instead – relatively short rapid games, let’s say 15+10, as you play in the World Rapid – and you get one point for each day. If you want to see who the best player is make them play as many games as possible, and if you keep the rapid format then there’s still room for opening ideas, preparation and everything, but the time allowed to conceal your weaknesses and everything is not there. You just up the stakes, you increase the chances for errors and everything, and I think it makes it more exciting and it gives a more real picture of the best players.

As we see today, rapid chess isn’t the direction FIDE has chosen.

FIDE’s announcement outlines the following changes to the match format:

Some of the changes, such as doubling the minimum prize fund, will be welcomed by all, while increasing the number of games was something most chess fans and many players advocated. Reducing the number of rest days was also a popular suggestion, though our GRENKE commentary team of Jan Gustafsson and Peter Leko felt that would be very tough on the players, with Peter assuming the intention is, “we put more pressure on you so we want you to blunder later on!” They also questioned whether this would help prevent draws, since the players and their teams require time to try and find a chink in their opponent’s preparation.

Perhaps the major change is the removal of increments, which can again be seen as an attempt to create more excitement and blunders by making potential time trouble in the games much more dramatic. We saw how Magnus used the clock to his advantage in the recent Shamkir Chess tournament, and he advocated for not having increments in classical chess there:

In general I believe in classical chess it’s a good idea not to have increments because it gives an extra dimension to the game in that you have to spend your time well and ration it rather than just relying on the increment… It’s a very nice change of pace.

He did, however, point out that overall he preferred faster time controls.

What do you think of the changes to the World Championship match format? Let us know in the comments!