It's been a tough year for chess prodigies, but 13-year-old Corsican Marc'Andria Maurizzi is one good result away from the grandmaster title after finishing unbeaten on 6.5/9 in the Barcelona GM Tournament held from 16-24 February. That saw him take 2nd place behind 2016 French Champion Matthieu Cornette, who was also unbeaten on 7/9. French FM Joachim Iglesias reports on the event, highlighting some of the best combinations involving French players. Test yourself if you can find them! 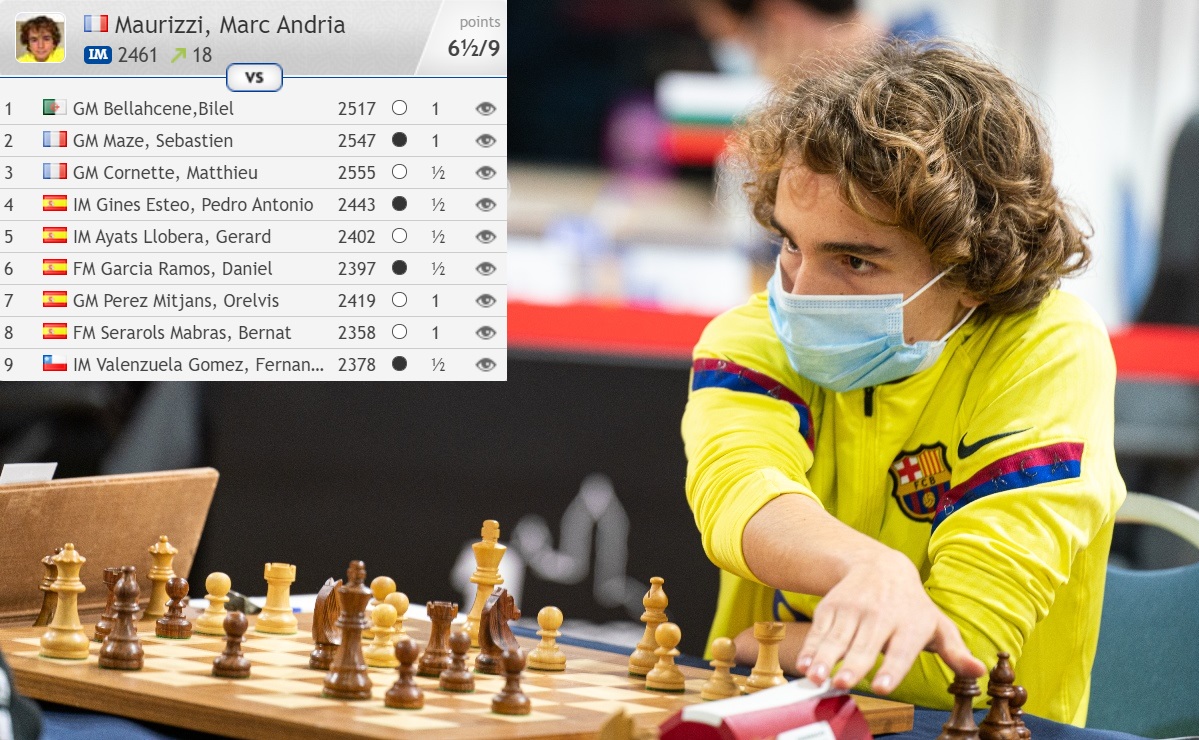 Matthieu Cornette and Marc'Andria Maurizzi dominated the field in Barcelona, finishing as the only unbeaten players, a full 1.5 points clear of the tie for 3rd place. You can click on any result in the table below to go to the game, or hover over a player's name to see all their results.

Marc'An has therefore scored his 2nd grandmaster norm at the age of just 13 and looks well on course to become the youngest French grandmaster of all time, despite the time lost to the pandemic.

The youngest French GMs ever are currently: 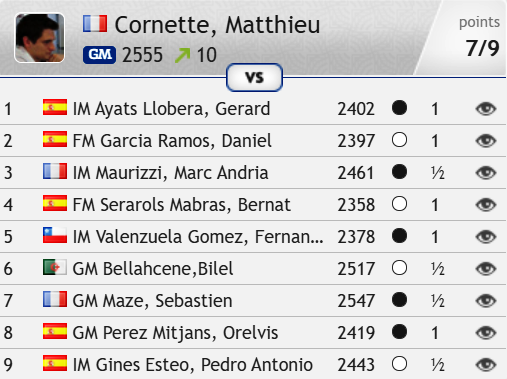 We were privileged to be able to play chess again. I'd prepared seriously for the tournament and was very motivated. I'm satisfied with my level of play. I'm very happy that Marc'An has made his 2nd norm - he's full of surprises! :)

Of the ten participants in the GM tournament, four were French, if we include the dual national Bilel Bellahcene, who plays under the Algerian flag. While only Matthieu Cornette and Marc'Andria Maurizzi could be fully satisfied with their events, the French were all able to show their tactical acuity! I suggest putting yourself in their place and trying to find their combinations. The solutions are at the end of the article.

Ayats vs. Cornette, Round 1

Many moves win, but only one forces resignation - that was the move Bilel found!

The win is neither long, nor difficult to calculate, but many captures are possible.

With a two-pawn advantage, White's win should have been "a matter of technique", but the Spanish IM's last move 47.h3?? was a blunder, allowing Marc'An to save the draw in a very nice way!

Valenzuela vs. Cornette, Round 5

With the queenside closed, White found himself without a plan and started to play on the wrong wing, the kingside. His last 4 moves created weaknesses where Black in any case wanted to attack: 20.h4? 21.g3? 22.Kg2 23.Nf4? How can you finish things off?

Sébastien Maze found a very nice idea here, which his opponent fell right into. It seems hard to ask for more, but there was something stronger and still more beautiful!

Mazé played 30...Nxc3!, after which his opponent blundered with 31.Bc5??, reaching this position, which the former French team captain finished off nicely:

But after 30...Nxc3! White could have resisted with 31.Re1! Qxa3 32.Qh4 and Black only has an extra pawn. That's why he should have played 30...Nxe3!!, after which 31.fxe3 is simply positionally lost, so the only move we'd have to check is 31.Qxe3, which permits a magnificent combination!

Garcia Ramos vs. Maurizzi, Round 6

In a desperate position 3 pawns down, Marc'An sets up one last trap into which his opponent falls by playing 55.Bxe6?? How does Black save the draw?

Due to this theme, the win was no longer trivial. For example, 55.Qe3?? would allow another draw - how? Can you find a clear win for White after 54...Kh7?

Ayats vs. Cornette, Round 1

White could have tried to play on with an extra pawn by not taking the rook, but with such a weak king winning the game would be too much to hope for.

The idea of 47.h3??, giving the king the h2-square, was good, but White should have played 47.h4! to protect the pawn and avoid the combination.

Valenzuela vs. Cornette, Round 5