The games are open! 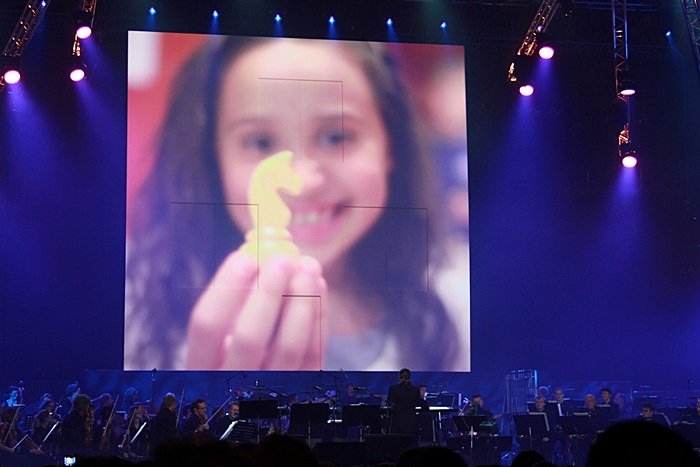 A girl holds up a knight in the video shown on a big screen at the opening ceremony | photo: Georgios Souleidis

The Tromsø 2014 edition of the Chess Olympiad is now officially underway, after a gala musical opening ceremony. FIDE President Kirsan Ilyumzhinov carried out the honors, and national broadcaster NRK streamed the event to the nation live online. The chess kicks off at 15:00 CEST today, with the pairings for all boards now available.

In a typically Norwegian welcome, the mayor called on each team to introduce themselves by standing and cheering as their flag rolled past on a central screen. Not every nation rose to the occasion with hearty enthusiasm, but the invitation did succeed in raising the sense of excitement and anticipation for the games to come. 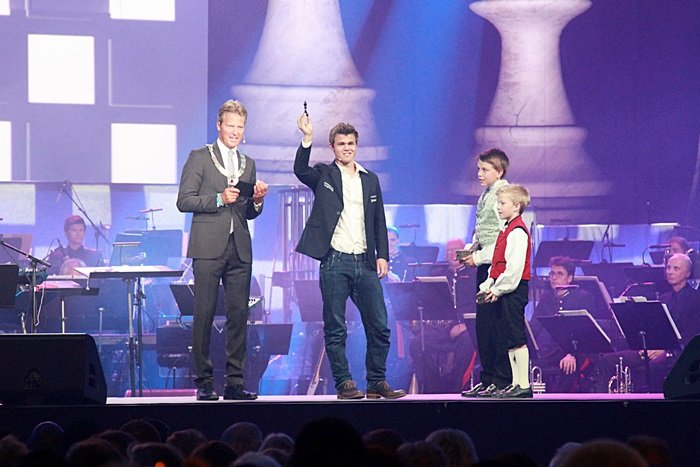 The reigning king of chess holds up a king! | photo: Georgios Souleidis

Particularly heartwarming for the local audience was the reception for world champion and national hero Magnus Carlsen. When he entered the stage, the welcoming cheers from members of the many teams present produced higher decibel levels than the local applause, and made it clear that the Norwegian is genuinely popular. It's easy to assume so from Norway, but it's always nice to see proof.

Now attention will turn to the games, as a record number of teams have succeeded in making the trip to Tromsø. Further to the north of an already far-flung destination, this small spot is known, like much of the country, for its natural beauty, and for extremes like the Midnight Sun, the Northern Lights - and northern hospitality.

The Round 1 pairings have now been published. The top match-ups for the men, with Jordan - Russia on the top table, are:

The top match-ups for the women, also featuring Russia-Jordan, are:

You can find the full lists at Chess-Results (men, women), while all the games will be broadcast live here on the official website.

Chess in Norway - the story so far

Although it might not seem such an exotic destination for a Chess Olympiad - after all, Norway is the home of the reigning world champion - in terms of history, it is just an emerging nation. In fact, the seeds of ambition for staging major chess events, and laying the ground to produce top players, is just a generation old.

This happened through the efforts of a man who was truly the first to put Norway on the chess map. Until his death in 1995, Arnold Eikrem tirelessly organized international chess events, primarily in Gausdal, a remote skiing destination that gradually earned a reputation as a chess mecca. With a tight budget and what can only have been a lifetime labor of love, Arnold seduced an incredible gallery of star players to this tiny spot, using charm, skiing holidays and bountiful smorgasbords to make up for what he lacked in funding. 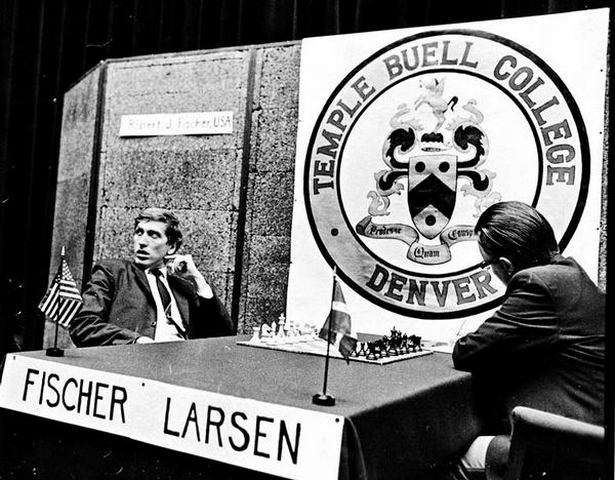 I'm not sure if anyone ever stopped to wonder why and how he did this. My impression is that he so enjoyed the international chess experience he had as a youngster, where he got to know regional icons like Fridrik Olafsson and Bent Larsen, that he was inspired to try and create this atmosphere whenever he could.


When you step back in time and space like this, you can imagine you see how it all connects. The surge of interest that Bobby Fischer's title produced, and the part that chess-mad Iceland played in this - then you see how the Nordic stars of the time helped spark the interest that hosted that match, and would eventually even make Norway fertile ground for future players. And I think the social aspect that made up much of what inspired Eikrem is reflected by Norway hosting an Olympiad, that grand global family reunion of an event.

Round 1 - David vs. Goliath

The first round of the Olympiad tends be a day of Davids vs. Goliaths - and by and large the favorites will be striving for shut-outs, and underdogs looking for moments of glory. The host nation will have constant pressure on them - national broadcaster NRK will be bombarding the public with live TV coverage of the games, and hopes will be sky-high as they are led into battle by Magnus.

As the drama unfolds, we will be looking to report on more than just the chess and the favorites, and try not to stare too much at the home team. And I hope that our readers and viewers will be able to help with this. 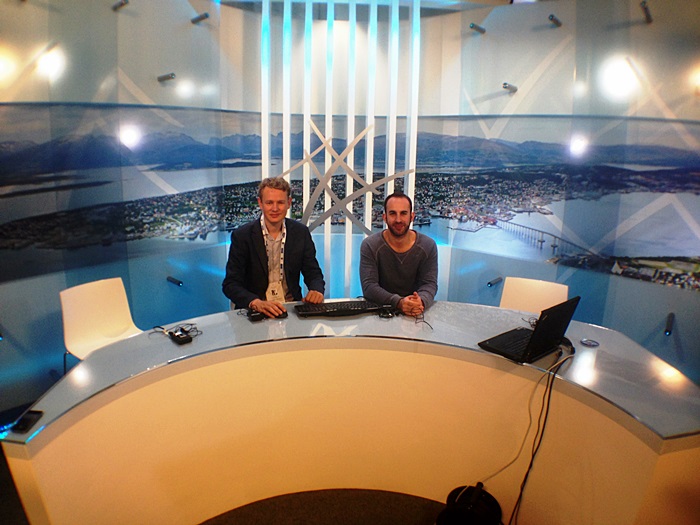 Jan Gustafsson and Lawrence Trent will be joined by Einar Gausel to broadcast live from the venue - but they need your help to keep tabs on the hundreds of boards!

In the Internet age interactivity is king, and audiences clamor for instant and total gratification - or at least delivery. I'm looking forward to this aspect of coverage - at such a huge and varied event it is impossible to cover all the games or players in depth - but we can find special and hidden stories with the help of tips from global spectators.

If you know of interesting people who have a story to tell, or spot surprisingly exciting, or remarkable games or moves - let us know and we will chase them. The Olympiad is most of all an opportunity to meet and appreciate characters and cultures you missed out on before - so tip us off (at @GMjtis or @EinarGausel) if you think you know something that deserves a bit of global spotlight.