Norway 1 entertained the home fans with a clean 3-1 over Italy, with Magnus Carlsen performing some of his patented minimalist magic to defeat a major rival. GM Kjetil Lie put the Norwegians ahead with the kind of robust aggression typical of his best form on board four, and the teams traded wins on boards two and three. All eyes were fixed on the Caruana-Carlsen clash, where Magnus presumably pulled off an opening surprise by adopting the offbeat variation that he himself had faced as White against Nikola Djukic of Montenegro in round three. 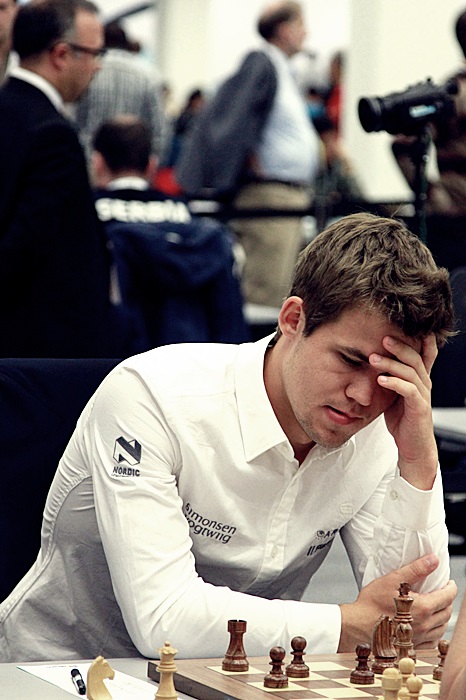 Magnus might have been under pressure early on, but the game ended the way it usually does when he's involved | photo: Georgios Souleidis, chess24

Caruana appeared to gain a small but comfortable advantage in a queenless middlegame, but as Carlsen has shown so many times before, the quieter the position, the deadlier he is. In typically hypnotic fashion, the position steadily swung Carlsen's way, and suddenly all of White's pawns were falling like overripe fruit.

1. e4 d5 2. exd5 ♕xd5 3. ♘c3 ♕d8⁉ Carlsen faced this slightly unusual move in round 3 against Montenergo's GM Nikola Djukic. I expect 3...Qd8 will be getting some serious attention after the present game.

27. ♘e4 looked like a better idea. Black now slowly but surely takes control over the proceedings.

Carlsen's pleasure with today's work was obvious, as he stopped to high-five colleague Jon Ludvig Hammer on his way into the NRK TV studio. Norwegian TV host Ole Rolfsrud asked Carlsen how it felt to beat young Caruana, and got a detailed answer.

Well, he's not that young anymore either. He's been around for a few years. But when Wei Yi from China comes up, he will be fun to beat! But Caruana is number 3 in the world and someone I've lost against a few times, so it feels incredibly good to beat him.

On top board Azerbaijan continues to set the pace, clinching another match victory thanks to two wins with the white pieces – GM Rauf Mamedov nailing GM Gaioz Nigalidze with a steady technical performance and Mamedyarov beating Jobava in a bare-knuckle brawl.

22. b4 Both players are flinging pawns forward to open up lines against the enemy king.

26. ♕d1 A tempting alternative was the brutal 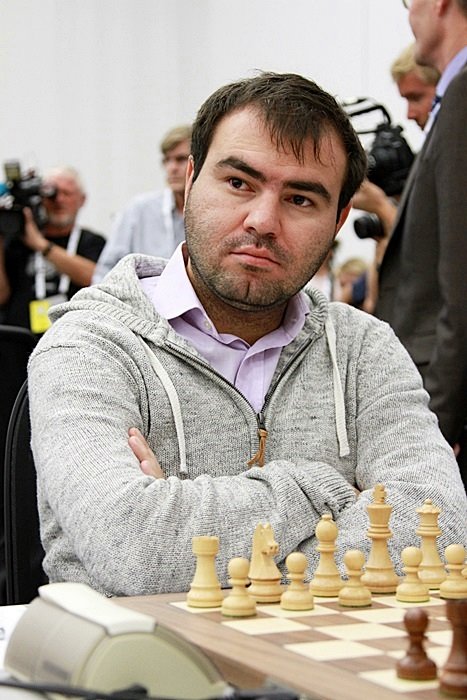 Despite the tragic absence of Vugar Gashimov, three wins in a row for Shakhriyar Mamedyarov have helped take Azerbaijan to the very top of the table | photo: Georgios Souleidis, chess24

Radjabov's draw with black on board two provided the Azeris guaranteed match points, and on board four Eltaj Safarli finished the rout with his queen finally overcoming Konstantine Shanava’s rook and bishop in 101 moves.

Serbia-Bulgaria ended 2-2, with former World Champion Veselin Topalov tying things up for Bulgaria on board one in the final game to finish. Afterwards he paid a visit to the official internet broadcast studio:

The match also marked the end of Valentin Iotov's perfect run, after he drew as Black against GM Robert Markus.

The Uzbekistan-Russia match did indeed turn into a win with White contest. Kasimdzhanov beat Kramnik:

But that was answered by Grischuk's demolition of Filippov:

26. ♖e1! White brings his last piece into the attack.

The favorites nevertheless completed their pair of white wins when Ian Nepomniachtchi beat IM Jahongir Vakhidov on board four.

The match would be decided by whether GM Marat Dzhumaev could complete the set by converting his advantage against the formidable Peter Svidler. In the end the Russian escaped, and his team took the hard-earned match points.

On the live broadcast Rustam commented on Uzbekistan's ambitions:

I don't think the Uzbek team has any targets. We just show up and we fight.

There were a number of lopsided results, and several favored teams soared up the points table. Cuba nearly blanked Kazakhstan 3.5-0.5, China did the same to Egypt, as did India to Moldova. Croatia, the Netherlands, the Czech Republic, Hungary, Romania and Latvia all won 3-1 today.

Highly seeded teams that got back to business were #2 Ukraine 3.5-0.5 over Switzerland, #4 Armenia 2.5-1.5-1 vs. 10th seed England, and #6 USA 3-1 against Paraguay. Third seeds France had to settle for four draws against 42nd ranked Bosnia & Herzegovina, and ninth ranked Israel split 2-2 with a tough Canadian team. One of the positive surprises of the event so far, Qatar, ranked only 57th, won again, this time 2.5-1.5 over Greece.

After passing the half-way mark only two teams have 11 points, with a 10-team chasing pack:

Tomorrow's highlights: The leaders face off on the top table - Cuba will play white on the odd-numbered boards against Azerbaijan. The teams on 10 points include second seeded Russia, who meet the Czech Republic, and defending Olympiad champions Armenia, who meet the fifth seeds, Hungary.

Sanitation update: The Tromsø organizers have again responded to criticism of the toilet facilities at the Olympiad.

The 56 portable toilets are of the highest standards in porcelain, and have been shipped from Malmö in Sweden. Based on the feedback, we realized we had to do something more. We have now doubled the number of cleaning staff - for the second time - and have also made sure that all toilets are much better marked and easier to find.

If today’s reports (see our interim report here if you missed it) have perhaps included more information on the toilet arrangements than you strictly wanted to know, here’s a new video of the public face of the Olympiad venue!

The first news bulletin is that corrected results revealed that Iran did not in fact lose in this round - though a 2-2 result against lower ranked Greece was probably a disappointment for the over-performing Iranians.

The rest day seemed to have rejuvenated the top teams, and they won in style. China was all business, 3-1 and two white wins against Hungary, Russia deflated Serbia 3.5-0.5, third seed France downed Slovakia 3-1, 8th ranked Poland defeated Netherlands 3-1, 6th seed Romania bounced back with 4-0 over Switzerland, and number 7 USA beat Estonia 3-1 by winning both games with the black pieces. 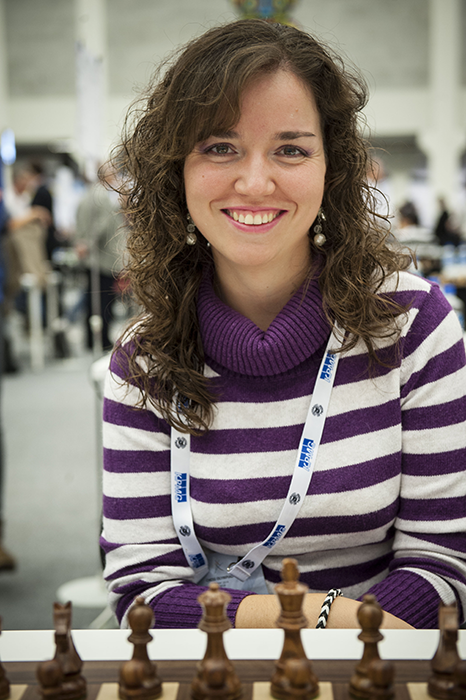 The only 'perfect perfect' score in the Women's event also ended today, as Peruvian WGM Deysi Cori dropped her first half point in six rounds, to English IM Jovanka Houska.

Bulgaria fell to a 3-1 loss to Ukraine, though GM Antoaneta Stefanova managed to hold GM Anna Muzychuk to a draw on top board.

There are also two clear leaders in the women's event, though in this case only Poland are keeping pace a point behind them:

Tomorrow's pairings feature the showpiece of the event - Russia and China clash at last, and the second seeded Russians will have white on the odd numbered boards, possibly a crucial factor when thinking about how to handle the Chinese number one, Yifan Hou, who is in range of catching the formerly untouchable Judit Polgar on the women's rating list.