Round 8 interim report: Only the missing

Today we finally saw no surprises in terms of zero tolerance forfeits, but a mystery about attendance remains. As mentioned in previous reports, one member of the Libyan Open team is paired though never here, and this arrangement now also applies to the Burundi Open team - their second board has now been excluded from the event, along with the Burundi Women's team, for repeated non-appearance.

The organizers have promised a statement at today's official evening press conference about the Burundians - who are not just not being paired, but actually missing. To sum up - it appears that everyone who is here arrived at the board on time today. 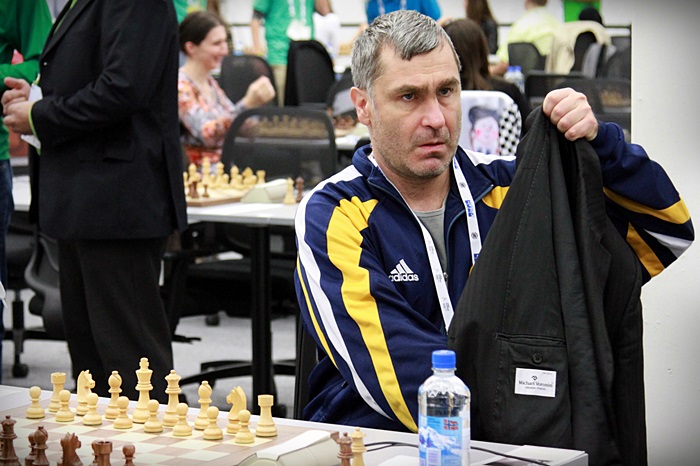 Vassily Ivanchuk came to the board ready for a fight | photo: Georgios Souleidis, chess24

The attention-grabbing match in the Open section turned out to be second seeds Ukraine floating up to meet 18th ranked Bulgaria. The Bulgarians looked set to continue their brisk pace, with Topalov putting legend Ivanchuk under dangerous pressure with the Black pieces, while Ivan Cheparinov startled Ruslan Ponomariov with a tactical blow that won material on board two. Ukraine have been shaky in this event, and today could spell the end of any hopes of a comeback. The tension got turned up a few notches though, with Pavel Eljanov building up a winning advantage against the hottest man in the Olympiad, Bulgaria's Valentin Iotov.


Two dull draws were recorded on the top half of the China-Azerbaijan match, and the remaining games looked better for the white players, so an evenly balanced and tense match. The Azeris lead the event on match points, the only team with 13/14, while China, Czech Republic, Bulgaria and Romania are chasing with 12.

The sixth seeded USA's hopes of clawing their way back into the serious medals race suffered a blow when 5th seeded Hungary took first blood in their match - Richard Rapport won a piece on board three early after a gruesome tactical oversight from Alexander Onischuk.

Although there have been no cheery headlines for the Norwegian teams lately, with world champ Magnus Carlsen crashing to defeat from a pawn up in the pivotal game of Norway 1's round 7 clash with Germany, there are still positive stories to be found about Norway 2. They continue to overperform, and players 1, 3 and 5 - IM Frode Urkedal, IM Torbjørn Ringdal Hansen, and untitled Johan Salomon are all performing well over 2600 - at this rate Urkedal would become Norway's next grandmaster. Ringdal Hansen has the required norms but needs to lift his rating over 2500, while Salomon looks guaranteed to gain some kind of international title norm if the team faces reasonable opposition the rest of the event.

The script for the concluding rounds should be China aiming for perfection and hoping for perennial champions Russia to slip up down the stretch. Russia appeared to know their lines, taking the lead against 13th ranked Hungary with a win on board three, and building up very comfortable positions on the bottom boards. 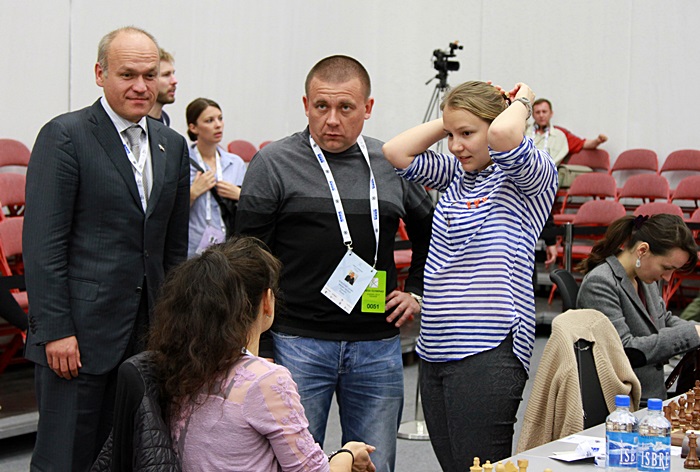 China were having trouble re-establishing their previous steamrolling rhythm against 8th ranked Poland. World Champion Yifan Hou seemed to have shrugged off her painful defeat against rival Kateryna Lagno from the day before, and was up the exchange against GM Monika Socko, but the remaining boards were evenly fought.

Other top matches were too close to call in the third hour of play.