Norwegian camera teams may have been swarming around Magnus Carlsen before his meeting with world number two Levon Aronian, but the serious chess spectators had eyes firmly fixed on the start of Kramnik-Topalov, where the feud that began in their acrimonious 2006 world title match has resulted in permanently frosty relations.

Despite meeting frequently at elite events, the pair steadfastly refuse to execute the customary handshake that signals the start and end of play, and this significant 'non-event' always attracts attention, with chess fans hoping to be present for an eventual detente. Interestingly, a few minutes into the session Kramnik was strolling around and burst into a wide smile and offered his hand... to Magnus Carlsen, who looked puzzled before smiling and returning the friendly gesture. 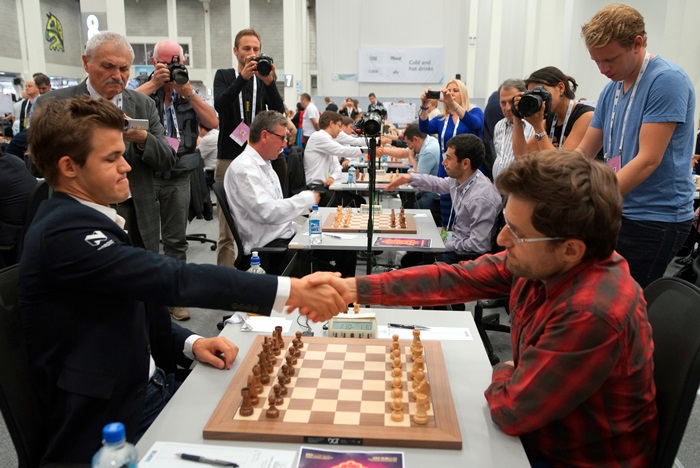 How the start of a game is supposed to look! | photo: Paul Truong

Chess action on the top boards: Azerbaijan looked set for a flying start with team leader Shakhriyar Mamedyarov throwing heavy punches from the opening bell. He built up a decisive advantage quickly, but Serbian GM Ivan Ivanisevic refused to stay down, and responded with heroic, creative resistance to avert an early knockout. The Azerbaijani star finally floored him to put the favorites ahead 1-0. The Serbians were fighting back in the third hour, with GM Perunovic putting serious pressure on Radjabov.


Hostilities between Kramnik and Topalov broke out quickly over the board, with the Russian number one energetically investing an exchange for extremely dangerous compensation. However, Karjakin seemed to be in trouble after a misstep against Bulgarian GM Iotov, so the match situation remained unclear.

The Armenia-Norway match began to fizzle out quickly on several boards, fourth being drawn quickly, and with first and third looking likely to follow. On board two, the defending champions appeared to be banking on Sargissian to work with an advantage as Black against Agdestein to try and decide the match in their favor.

The Togo women's team was again immediately in focus, but this time with a positive early result – their board one, Ama Edoh, winning a 17-move miniature as Black vs. Elza Hoareau from the Seychelles.

The Russia-Georgia match was tense and balanced, and the surprising Indonesian squad looked to be in serious trouble against the heavily favored Chinese, until WIM Chelsie Sihite suddenly got a chance to turn the tables and win a piece against GM Xue Zhao. The only early result in the key matches was a fourth board draw between Hungary and the surprising Iranians, but China began to pile on the pressure in the third hour. 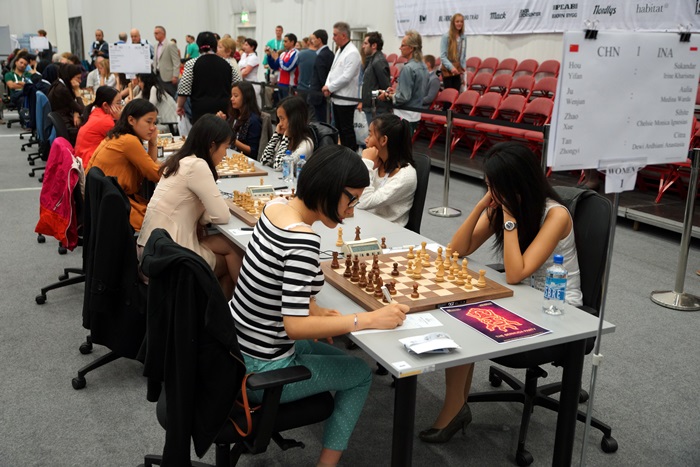 China - Indonesia - would the favorites live up to their billing? | photo: Paul Truong


Lithuanian GM Aloyzas Kveinys coached the Iranian women team for several years, including at the last Olympiad. He was very pleased with their torrid start in Tromsø, and commented:

Probably some results from my work with them (laughing). At least I hope so! Chess is very popular in Iran and the government does everything for chess players. I would hope for the same conditions in every country.

Zero tolerance watch: Still no day without forfeits - Saudi Arabia and Jordan both lost a point without play in the Open section, as did Libya - but there is more of a story behind the Libyan game, which was their fifth forfeit on board two. Chief Arbiter Takis Nikolopoulos confirmed that Libya's number two, FM Ibrahim Chahrani, has not arrived in Tromsø, and is not expected to. However, in order for Libya to be paired with a full team, Chahrani's name is listed every day, and of course, he never turns up in time.