Round 5: Deadlocks and escapes

Despite Kramnik's imposing play against Topalov on board one, Bulgaria actually took the lead in their match versus Russia as man in form Valentin Iotov torpedoed heavy favorite Sergey Karjakin with the black pieces on board three. But the decision in the battle of the ex-world champions went to Kramnik, who won a nice game over his rival to even things up. Ian Nepomniachtchi could not make an impression on GM Krasimir Rusev in the last game to finish, and the Russians were held to a draw for the second day in a row.

Kramnik's fine win was cancelled out by a shocker for world no. 6 Karjakin: 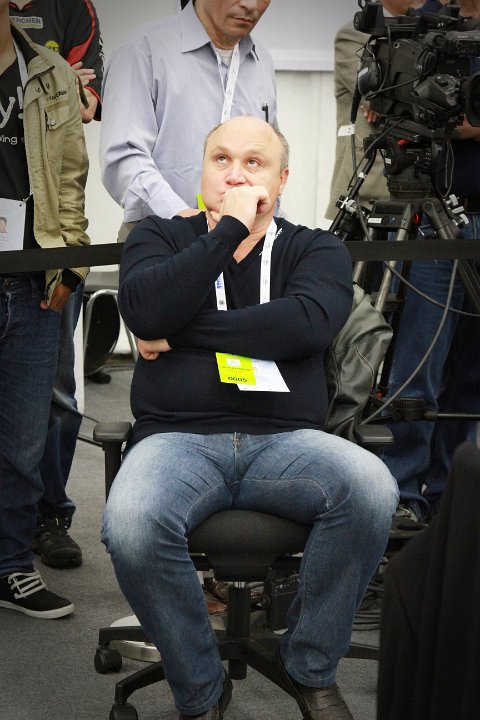 As if one former World Champion wasn't enough for a single day, Garry Kasparov also appeared in our studio:

The duel between teams with perfect Olympiad records, Azerbaijan-Serbia, also looked set to end in a deadlock after GM Milos Perunovic pulled Serbia even by beating former Azerbaijan number one Teimour Radjabov on board two. Shakhriyar Mamedyarov had earlier won the following game:

The final game to conclude, Mamedov-Markus on board three, saw the Azerbaijan GM unable to convert an extra pawn as white against his Serbian colleague, and the 2-2 draw means that all teams have now dropped match points in the Olympiad.

Other top matches were predictably long, grim and close – China-Netherlands saw four draws, Cuba edged out Israel 2.5-1.5 and Armenian GM Gabriel Sargissian ground out a slow win over GM Simen Agdestein to beat Norway by one - but there were some surprises. Kazakhstan, ranked 49th, beat Turkey soundly 3-1 despite being outrated on every board, and Georgia moved up the table by beating Belgium by the same margin.


Qatar continues to have a fine event with the 57th seeds holding Germany 2-2, and England also had to split their match vs. Vietnam, with Michael Adams winning a crisp game against Quang Liem Le. English anchor Matthew Sadler was held to a draw for the first time. Third seed France sailed up the points table with a resounding 3.5–0.5 win over Argentina. 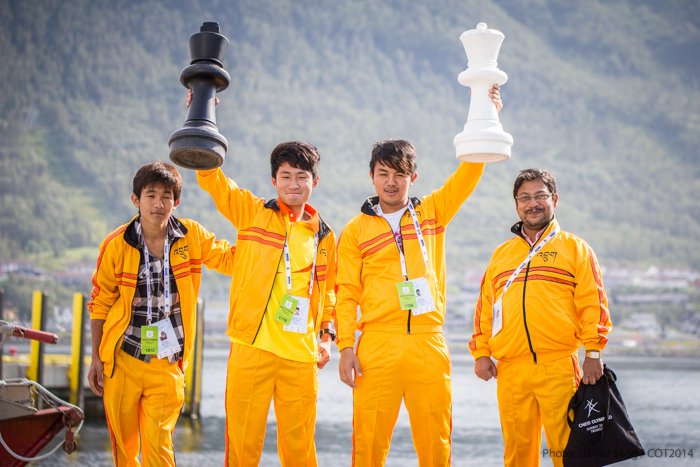 Bhutan aren't going to trouble the top teams, but at least they're enjoying their time in Tromsø | photo: Daniel Skog

The Norwegian media had been getting progressively more optimistic about the chances of the first team, but while they were clinging on to hopes of a 2-2 split with Armenia, encouraging attention could have been spent on Norway 2 – they are undefeated, including a spectacular 2-2 draw against second seeds Ukraine. In round 5 they won again, four IMs beating four Slovenian GMs 2.5-1.5. 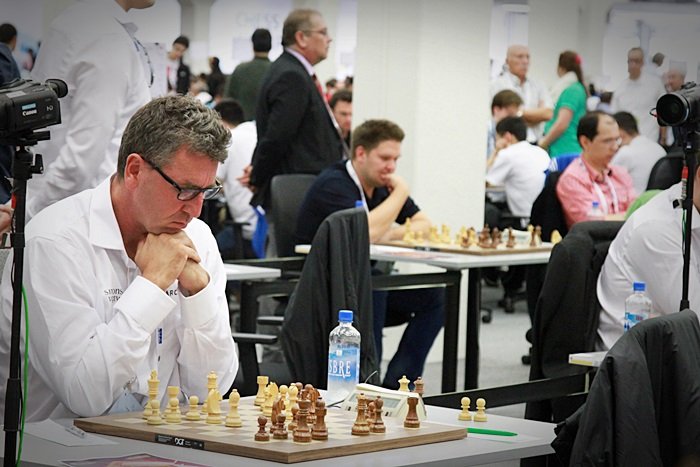 Ranked 58th, Norway 2 has now won three matches and drawn two, have a better match score than the first team, and they have been comprehensively outrated in the three matches where they faced stronger opposition. They may be led by a Norwegian rather than world champion, but they have earned the attention of an increasingly chess-crazy nation. 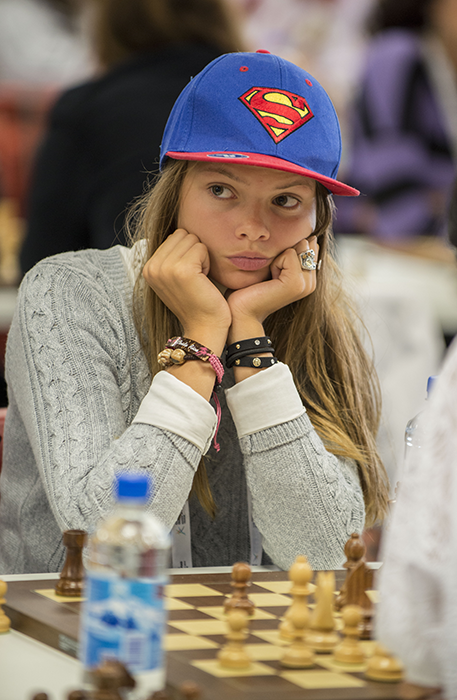 The USA benched an out of form Gata Kamsky for their grudge match against North American neighbors Canada, but things are still not going smoothly for the 6th seeds. Canada took the lead thanks to a win by GM Bator Sambuev over GM Varuzhan Akobian, and US number one Hikaru Nakamura was held by GM Anton Kovalyov. US hopes for a split decision rested on GM Sam Shankland, who delivered the necessary point over IM Aman Hambleton.

Ukraine are another big team struggling to find form, and today the second seeds had a tragic result, losing 1.5-2.5 after Ivanchuk crashed to defeat against Rustam Kasimdzhanov, and GM Anton Korobov got tricked and imploded while trying to convert a pawn advantage.

Handshake extra: In the interim round report, we noted that as well as traditionally refusing to shake hands with Topalov, Kramnik had puzzled Carlsen by offering his hand as they passed each other while strolling around just after the start of play - the Norwegian hesitated before smiling and accepting. 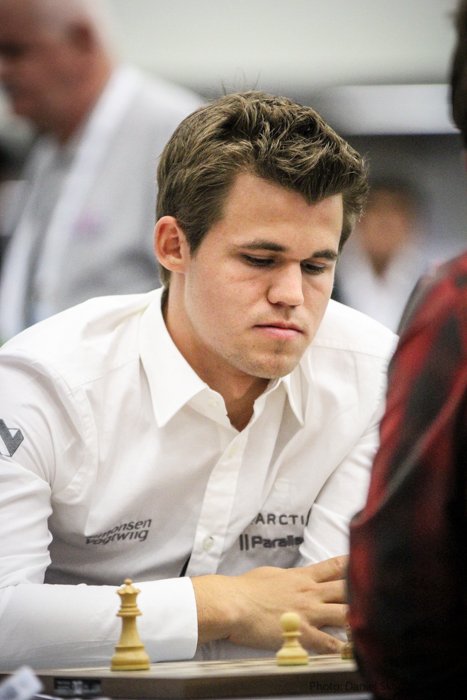 Magnus Carlsen: "He didn't have any reason to say hello" | photo: Daniel Skog

He said hello. I thought it was funny, because he didn't have any reason to say hello.

At the (almost) half-way point of the men’s event teams are tightly bunched at the top:

China rolled to a 3.5-0.5 win over Indonesia, but not without some nervous moments. WIM Chelsie Sihite had GM Xue Zhao completely at her mercy after the Chinese grandmaster made a serious error, but let victory slip after trying to cash in too quickly in an overwhelming position.

Iran’s hot streak finally came to an end vs. Hungary. GM Thanh Trang Hoang put the 13th seeded Hungarians in front with a win on top board over WGM Atousa Pourkashiyan. Hungary pressed for a bigger margin after the bottom boards were drawn, but had to settle for 2.5 points. 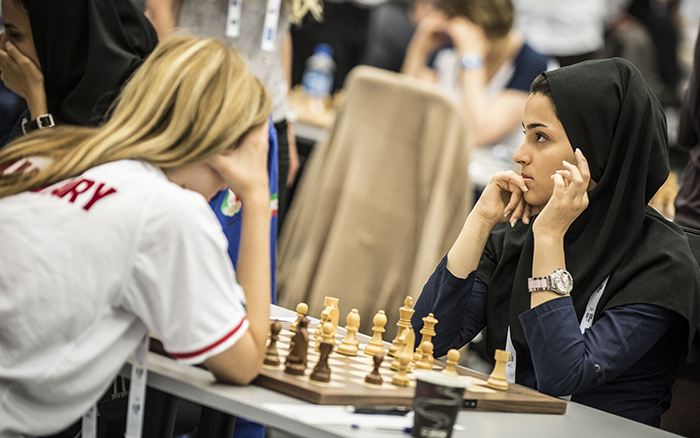 Russia-Georgia was the kind of tough battle one would expect from a meeting between the second and fourth seeds. Very closely fought, and coming down to one key game after three draws. Nela Khotenashvili looked set to seal the match for Georgia against GM Valentina Gunina on board two, but the Russian escaped and then stole the full point after it appeared her opponent could not readjust to the new situation.

This bit of good fortune means that three teams remain with a perfect match record as the Olympiad heads into its first rest day; China, Hungary and Russia.

Times are tough for the Ukrainian teams, while the sun is shining on Serbia. Third seeded Ukraine stumbled to defeat, like their compatriots in the Open event, while the mood in the Serbian camp will definitely be cheery tonight. Wins on boards 2-3 and a comfortable draw from first board IM Natasa Bojkovic against Ukraine’s GM Anna Muzychuk clinched the match for Serbia. 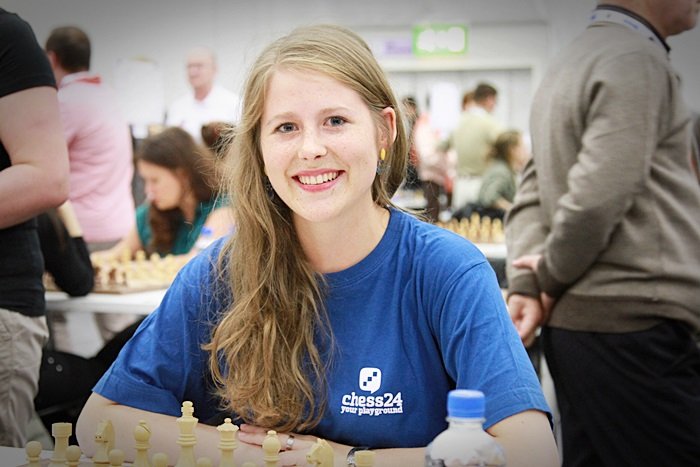 Netherlands upset 11th ranked Spain 2.5-1.5 despite GM Zhaoqin Peng being upended on board one by IM Sabrina Vega Gutierrez, and 8th seed Poland downed 17th ranked Kazakhstan 3-1, thanks to an efficient duo on the bottom boards.

Poland, Serbia and the Netherlands are therefore the chasing trio, with 9/10 match points.