France came down to earth with a slight thud today, unable to repeat the form that overcame defending champions Armenia in round three. Number eight Azerbaijan edged out a solid and impressive victory over the third seeds, drawing three and producing a win with Black on board one – Shakhriyar Mamedyarov beat Maxime Vachier-Lagrave, whose recent run of good form has lifted him into the world top ten. 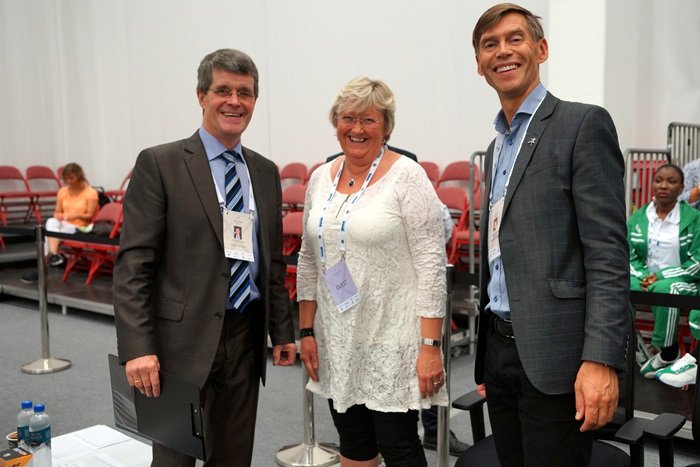 Einar Gausel takes a look at the final moments of the game that took Azerbaijan to the top of the table:

Russia-China was the kind of grim duel expected of a top clash, closely fought even when team members found themselves under pressure. The top two boards were the most eventful, with Kramnik and Yue Wang drawing an extremely lively game where the ex-world champion was pressing, while the fate of the match eventually came to rest on Grischuk's ability to steer to safety against rising star Liren Ding, which he managed after a long defensive slog. 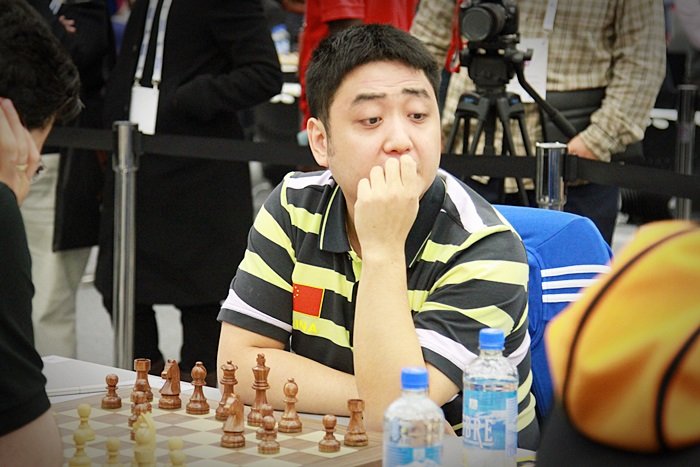 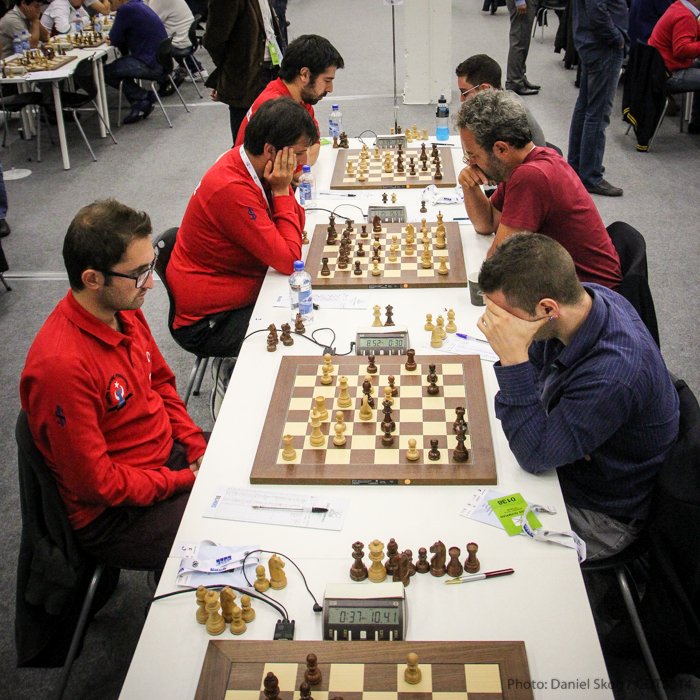 With the top half of the table now featuring largely even pairings, the matches were close affairs. One notable exception was Turkey's 3.5-0.5 dismantling of slightly higher seeded Italy. Only world number three Fabiano Caruana survived for Italy. Afterwards he entered the live broadcast studio:

England vaulted back into the fray with an impressive 3-1 win over Latvia, and GM Matthew Sadler racked up his fourth win in a ferocious comeback for his country. England's David Howell also won:

Serbia maintained a perfect match record by narrowly upsetting the Czech Republic, Bulgaria edged out Romania thanks to a grinding win from leader Veselin Topalov and a flashy and brutal attacking knockout from GM Valentin Iotov. Cuba took a third match win, a bottom board victory the only decisive result against India.

Netherlands-Israel looked like a close one on paper, and there was no separating them afterwards, trading wins on the top two boards, and drawing the rest. Germany also fought to a 2-2 draw, this time against Uzbekistan. 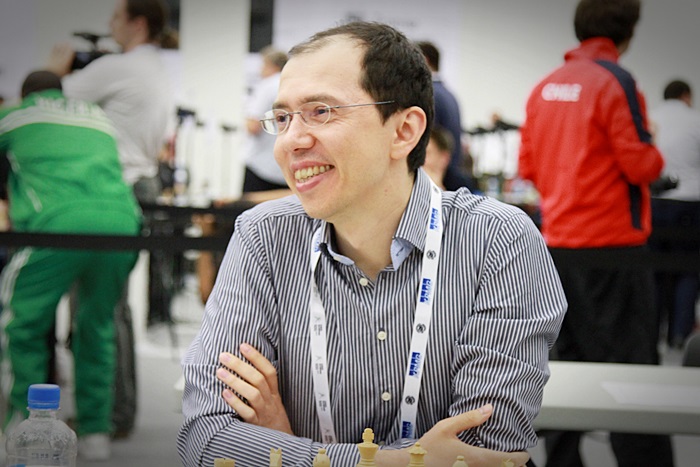 The surprise losers of the previous round rebounded with predictable fury. Armenia shredded Costa Rica 4-0 and world number two Levon Aronian finally started winning for the defending Olympiad champions. The USA shrugged off disappointment vs. France and cruised to a 3-0 lead over South Africa, though Gata Kamsky finally went down to a shock defeat against IM Henry Robert Steel.

Hungary also recovered from their frustrating loss to China the day before, dispatching Portugal 3.5-0.5, with IM Paulo Dias holding Hungarian ace Peter Leko on board one.

Norwegian hopes were high when Magnus Carlsen showed his full class, sweeping aside a player like Radoslaw Wojtaszek with bone-crushing simplicity.

26. d5 , grabbing more space and threatening to whip off a7, also looked tempting.

Magnus Carlsen spent 35 minutes after the game in the NRK studio talking about the game and we translated some of his best quotes in this separate article.

When Simen Agdestein built up a sizeable advantage with Black, Jon Ludvig Hammer created winning chances on board three and Kjetil Lie neutralized Mateusz Bartel, Poland's favorite on board four, national news outlets began predicting a rout, but all remaining games gradually fizzled out in draws - still, an encouraging result for Norway 1 against their toughest opposition so far.

The results mean that only three teams now have maximum points in the men's competition:

Full standings can be found here.

The day's results set up some juicy fifth round pairings; Serbia's fine start earns them a top board face-off against Azerbaijan, Russia meets Bulgaria, which could mean another installment of the bitter rivalry between Vladimir Kramnik and Veselin Topalov, and World Champion Magnus Carlsen will likely meet world number two Levon Aronian when Norway 1 take on Armenia. 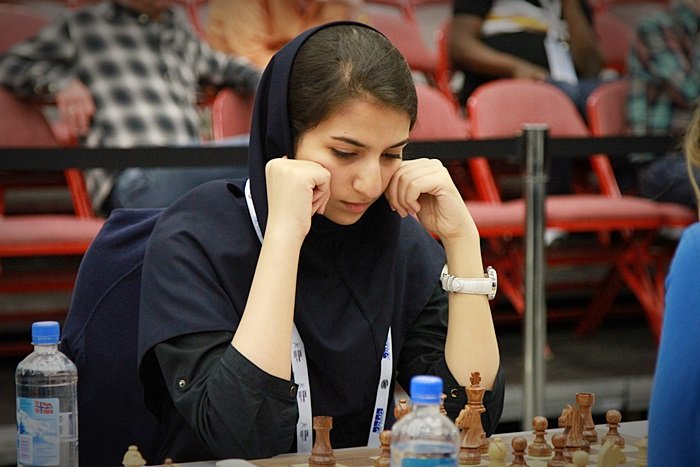 If the perfect score of the Iranian women's team after three rounds was newsworthy, then perhaps the best way to angle the headline for round four is - Iranian women drop first half point! The Olympiad sensations, seeded 21st, defended their right to the top table with a resounding 3.5-0.5 win over slightly higher rated Slovakia. Only Slovakian top board IM Eva Repkova survived, and the magical Iranians continue to outpace the clear pre-tournament favorites, China.

On paper, China should have steamrolled over 22nd ranked Azerbaijan, but the first result was a quickish draw from Chinese WGM Wenjun Ju with WGM Gulnar Mammadova. The favorites had a roughly 200 point advantage on the bottom three boards, and over twice as much on board one, where World Champion Yifan Hou put China ahead early. WGM Zhongyi Tan extended the gap to two points with White on board three, and WGM Qi Guo made the final result 3.5-0.5, but only after a topsy-turvy brawl with WIM Sabina Ibrahimova on board four.

If Iran has been the surprise of the event so far, the shock of the day has to go to Indonesia, who handed tenth seeded Armenia an incredible 3.5-0.5 drubbing. Seeded only 23rd, the Indonesians were outrated on all four boards. 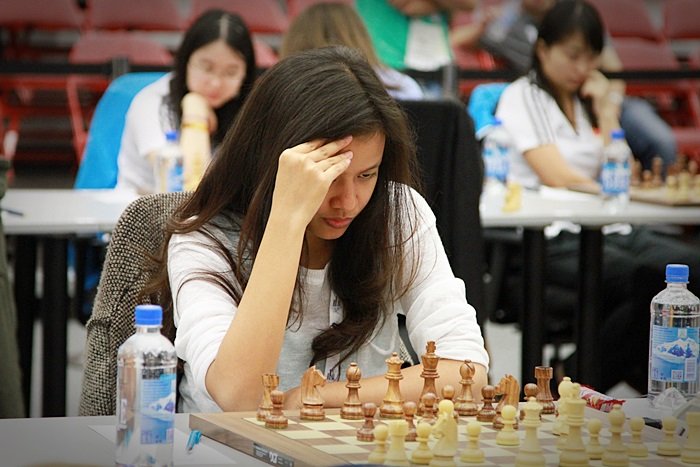 Fifth seeds India were upset by Serbia, 1.5-2.5, making the fourth round a cheery double for the Eastern Europeans. Ukraine, led by the Muzychuk sisters, turned in a solid 3-1 win over Turkey, but the third seeds must make up for a dropped match point against Spain in round three.

The 13th seeds Hungary produced another solid match victory, beating Cuba 3-1 - a result that sends them up to meet the red-hot Iranians.

Five teams have maximum points among the women:

Due to the vagaries of the pairing system, Round 5's top match will be between Indonesia and China, despite Iran having a full game point lead at this stage of the event. The top match according to the rating list will be Russia-Georgia.