Tromsø had two not-quite chess events in focus today - the 9 a.m. hearing at the local courthouse to assess the Russian Chess Federation's request that USD 200,000 of Olympiad funds be frozen for a lawsuit claiming that amount in legal fees incurred to get their women's team instated, and the arrival of Norwegian Prime Minister Erna Solberg, who became the top domestic political figure to grace the games. 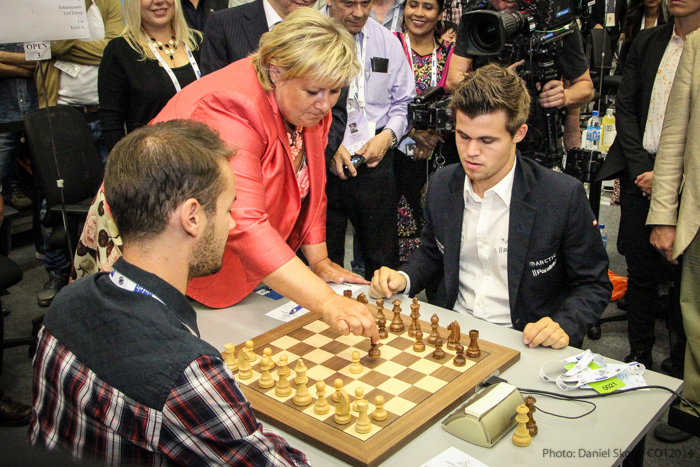 The PM opened the round's play by making the first move for world champion Magnus Carlsen against Croatia’s GM Ivan Saric, before being shown around the playing hall by Norwegian Chess Federation official Gisle Bjugn. Later Solberg appeared in the NRK studio and said that it's important for Norway to organize big events like this.

There were not many quick decisions in the top Open matches, but much notable action. Magnus Carlsen was in romantic mood, reviving the Bird's Defence against the Spanish, and did so in swashbuckling style, offering two pawns in order to gain a quick initiative and lead in development. There was widespread confusion about whether this radical approach was actually sound, particularly when the champ began to slide into time trouble as well. Saric finished cleanly, handing the world champion his second defeat of the event.

Our man Tarjei J. Svensen interviewed the Croatian after his game:

What happened in your game today?

Saric: Well, he played quite aggressively with Black and sacrificed one pawn then another one and it turns out that his position was not so good. He didn't have enough compensation for two pawns and I played solid moves and eventually ended up with a clear advantage.

Was this something you had prepared in advance?

No, actually he surprised me on move 3 and the game started very early as I was out of theory on move 5, but it seems he was also improvising.

It seemed you were in control from the beginning until the end?

It's easy to play the world champion. Whatever you do, it can only be good. If you lose, nobody will say anything to you. I won the game and I'm very happy. It's one of the biggest victories of my career. Currently he's the best in the world, but maybe he's the best of all time, and I really respect him as a player.

Top board in Serbia-Russia also caught the eye, with GM Ivan Ivanisevic losing a pawn in grotesque fashion against Vladimir Kramnik as White in an Exchange Queen's Gambit. A surprising and surprisingly early result was Bulgaria's hot man Valentin Iotov crashing to earth with the white pieces against Polish teenager GM Jan-Krzysztof Duda.

By the third hour of play, games started to reach boiling point all over the place. China moved closer to gold with a win with Black on board three against third seeded France, Yangyi Yu downing Laurent Fressinet. With draws in both their black games, French hopes rested on team leader Maxime Vachier-Lagrave being able to convert an endgame advantage against experienced Yue Wang to level the match. China held though, and move into clear first again, with just a rest day and one round remaining.


Bulgarian number one Veselin Topalov looked certain to even their match against Poland, and two tense games would remain, in another duel where a split decision could well mean the end of medal chances for both. 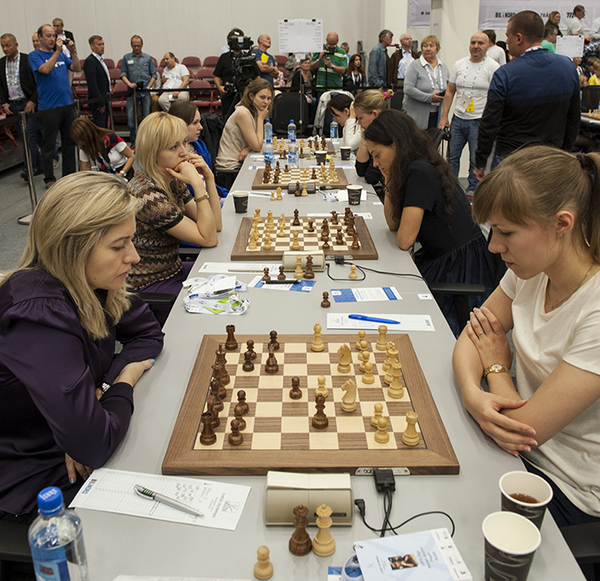 Local fans could try to figure out the insane complications unleashed by Norwegian GM Kjetil Lie's double piece sacrifice against Zdenko Kozul. In the key Ukraine-Azerbaijan match, Vassily Ivanchuk's poor form reasserted itself, the Ukrainian simply blundering material against Mamedyarov. Pavel Eljanov struck back on board three for the Ukraine with a neat finish against Rauf Mamedov, and the fate of the match was left to Ponomariov and Radjabov to decide in an even ending after Moiseenko-Safarli was drawn on board four.

In the Women's section, Romanian IM Irina Bulmaga smashed German WGM Sarah Hoolt in a match where victory will be essential to keep any team medal hopes alive. 4th seeds Georgia jumped out to a 2-0 lead against 8th ranked Poland, in another result vital for teams hoping to vault into the medal position past Ukraine.

The two sprint teams were toiling as the time control approached, both Russia and China were being held 1-1 in tough matches, against Ukraine and Spain respectively.

The zero tolerance watch has evolved into a regular check of teams and players that may have gone missing. When one of the local teams has attendance issues, people combing the event must become especially curious.

Unfortunately, Norway 3 in the men's team was unable to field a full team today. Due to personal circumstances, GM Rune Djurhuus and FM Lars Oskar Hauge had to leave Tromsø today, Hauge forfeiting on board two against Oman.