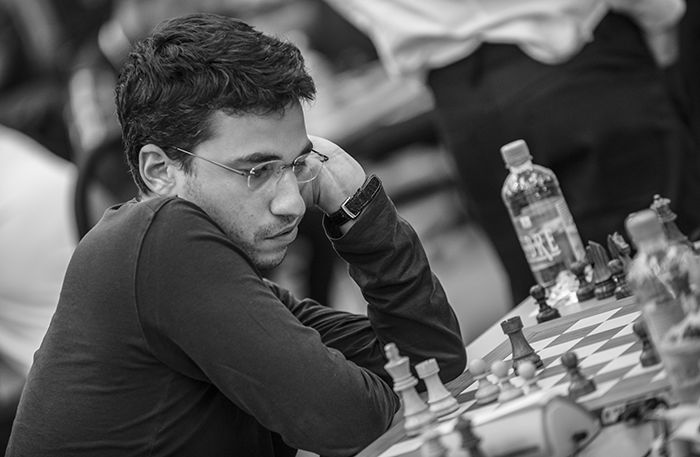 China's Open team will have the final rest day to mull over how best to bring home gold after Yu Yangyi's win over Laurent Fressinet gave them a vital win over France in Round 9. Now the only undefeated team in the Open event, 7th seeded China have only lost one individual game over ten rounds. Despite having a clear lead, China can still be caught, and if they want to avoid the trauma of calculating infinite tiebreak variations, they really need one more team victory. 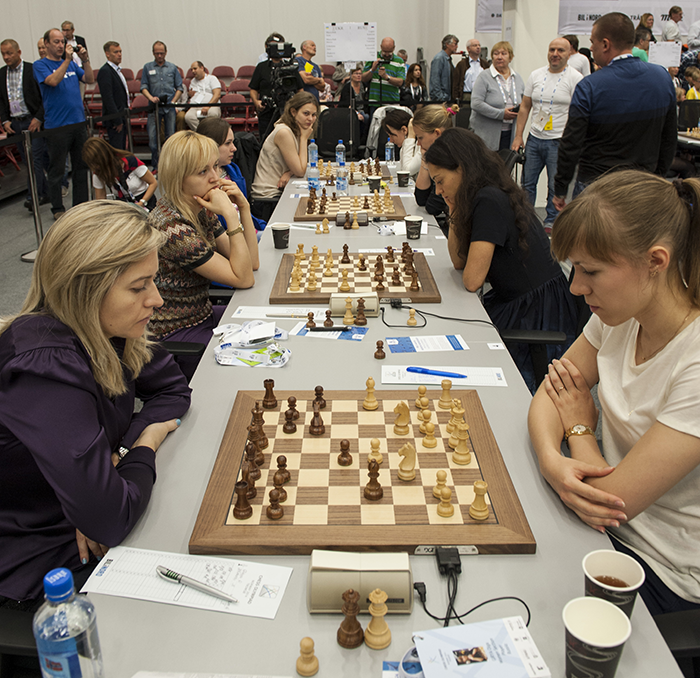 Round ten offered a chance for the top seeded women's team - from China - to resurrect their dreams of gold. The Ukrainian women continued a storming comeback with a win over Russia, in what had to be the grudge match of the entire event, after their acrimonious pre-Olympiad battle over who would get to field Kateryna Lagno in Tromsø. The match ended 2.5-1.5 after three draws and GM Natalia Zhukova's win on fourth board against WGM Olga Girya. 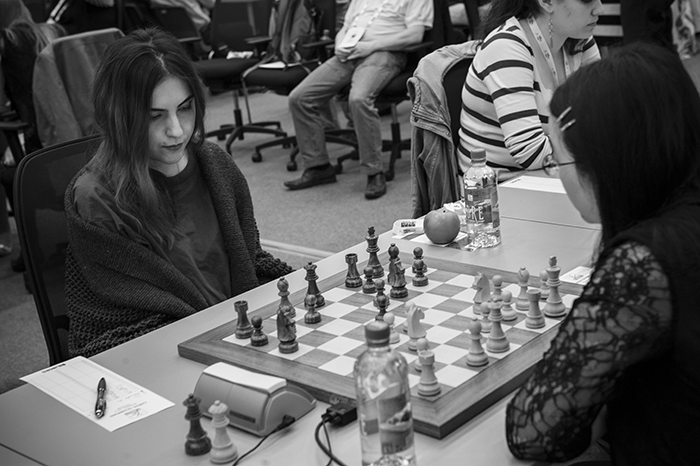 But could the favorites seize their opportunity? Although their world champion, Yifan Hou, steadily outplayed IM Sabrina Vega Gutierrez on top board, Spain hung tough. First drawing both of their games with White, and then with IM Ana Matnadze grinding down WGM Zhongyi Tan on board three, Spain saved part of the day for Russia.

Despite the misstep against Ukraine, Russia enter the final round with a one match-point lead over the field, with 18/20, and Ukraine has caught China on 17. Germany is the sole team on 16 points.

In the final round Ukraine meets China, while Russia faces Bulgaria and Georgia plays Germany in the matches most likely to decide the medals. Full team pairings here.

In the Open event, 5th seeds Hungary found themselves alone in second place, a point behind China. They did this by puncturing the incredible Romanians, who started the day fighting for silver position despite being seeded only 32nd. Another overperformer bit the dust today - the high-flying Bulgarians were edged out 2.5-1.5 by the 15th seeds, Poland. Former World Champion Topalov kept his hot streak going, beating Wojtaszek on first board, but his teammates could not maintain the pace. Poland struck back on the middle boards, Gajewski and Duda beating Cheparinov and man-in-form Iotov, respectively. 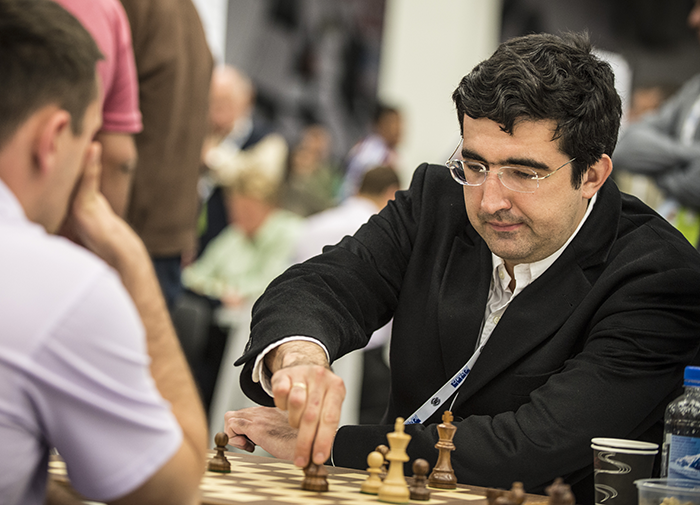 Despite two crushing consecutive losses to Rustam Kasimdzhanov and Paco Vallejo, Vladimir Kramnik is now back in the Top 10 and more or less performing at his rating for the tournament | photo: David Llada

Top seeds Russia returned to the chasing pack with a 2.5-1.5 win over Serbia, Kramnik winning after a horrendous opening from Ivanisevic, and with the teams trading wins with White on the bottom two boards. The 6th seeds USA also made a late reappearance, edging out Argentina 2.5-1.5 thanks to wins by anchor Nakamura and the unstoppable Sam Shankland, who now has 8.5/9.


India handed Germany their first team defeat of the event, winning 2.5-1.5 on the strength of GM Krishnan Sasikiran’s victory with the black pieces over Liviu-Dieter Nisipeanu. Uzbekistan are the clear positive surprise after ten rounds, thanks to another upset, this time 2.5-1.5 over 11th ranked Netherlands, with IM Jahongir Vakhidov supplying the only decisive result, beating GM Robin van Kampen on board four.

The round's battles produced a log-jam of teams on 15 points, and since Hungary has already faced - and lost - to China, one of these must float up to first board. If the Chinese can be vanquished at the final hurdle, the destination of the medals will be an incredibly exciting and complicated affair. The protagonists with an uphill battle in the potentially wild final round are, all on 15 points: USA, Russia, Ukraine, France, Azerbaijan, Poland, rising India, and the latest high-fliers, 33rd seeded Uzbekistan.

Norway 1's Open match against Croatia was exciting, eventful and ultimately unfortunate. The world champion summed up his loss on board one:

Today I deserved to be punished.

We included a mini-interview which his conqueror Ivan Saric in our interim report, while GM Einar Gausel has now annotated the game:

12. ♕d3 ♗h5 13. ♘c3 ♖e8 After the game Carlsen said he had thought he had reasonable compensation for the pawns at this stage. Carlsen added that he had underestimated White's next move. 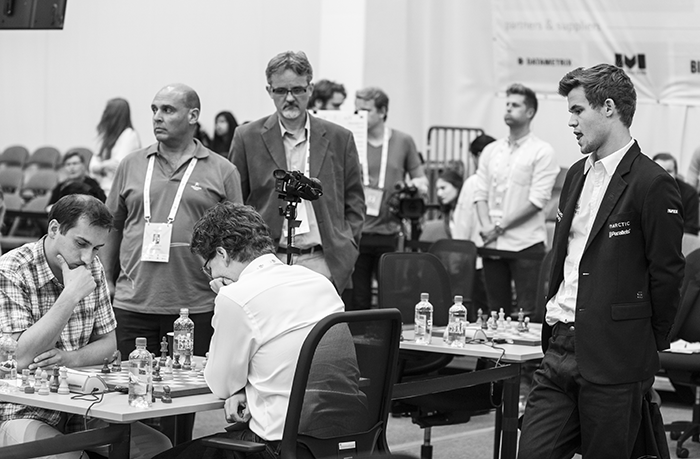 Not a day to remember for Norway | photo: David Llada

GMs Hammer and Lie seemed to have attractive positions, but both eventually went astray in radically different ways - Hammer being methodically rolled back, while Lie's sacrificial melee with Kozul was arguably the most spectacular and interesting game of the tournament, but in one of the oddest resulting material imbalances I have ever seen in my life, the Norwegian's king turned out to be frighteningly exposed and impossible to defend in time trouble.

15... ♖e8? This sets the stage for later tactics on f7. Continuing development with

16. e5! White grabs his chance to strike before Black has managed to mobilize his forces.

Norway 2 drew with Colombia 2-2, and though this was a very slightly disappointing result, they have now tied Norway 1 in match points. Norway 2 has 23 game points – Norway 1 only 21.5.

Our @TarjeiJS came up with the answer:

You can download and enjoy our free PDF bulletin, including GM Einar Gausel's "Blunders, upsets and knockouts" section and now the interim as well as the final report, by clicking the link below:

Tomorrow is another rest day before Thursday's final round, when the games start ‌three hours earlier at 11am EST. We'll of course be covering the action live, but you may want to use the rest day to catch up on some of today's commentary - for instance, the segment when Australian GM David Smerdon joined the show: