Round 1: Delay, drama and nerves

The first round of the Tromsø Olympiad got off to a slightly delayed start, one result of the teething pains expected when an event of this size actually goes live. Security measures for the record field meant that even with teams turning up early for play, not everyone could be processed by the scheduled 3 p.m. start. 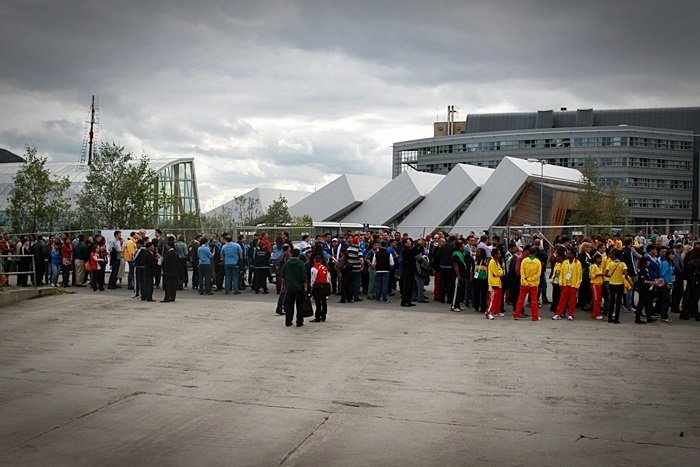 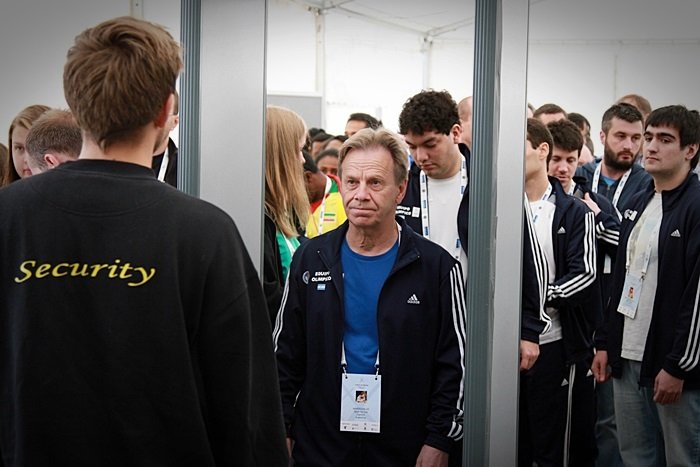 The security crew now understand the scope of the challenge, and the players as well. Entry to the hall will begin from an hour before play, and we all know from experience that things go smoother from day two. The tournament directors will oversee the work done at the entrance and cooperate closely with security personnel to make sure this is as efficient as possible.

With the field divided in half for the first round pairings, there were heavy mismatches, and spectators were on the lookout for upsets of any form. None was forthcoming on the top match or board. 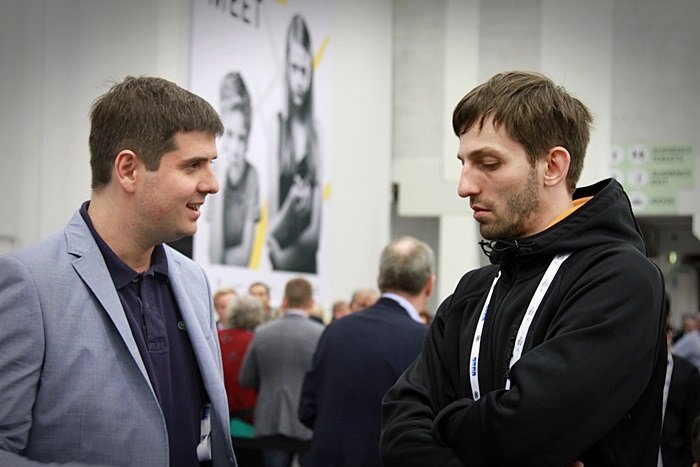 Russian boards 3 and 2, Peter Svidler and Alexander Grischuk - surprisingly ahead of Sergey Karjakin on board 4

The first moments of the 2014 Tromsø were captured on video:

Fighting spirit in unexpected form erupted briefly in the playing hall - veteran journalist and Australian grandmaster Ian Rogers reported that a scuffle broke out that was apparently linked to a serious disagreement related to FIDE politics, but order was quickly restored.

As play developed on the boards, there appeared to be an astonishing range of massive upsets in progress in the lower half of the women's event, but this was quickly traced to a glitch with the set-up of the game feed and the electronic boards, which caused some match results to be reversed. 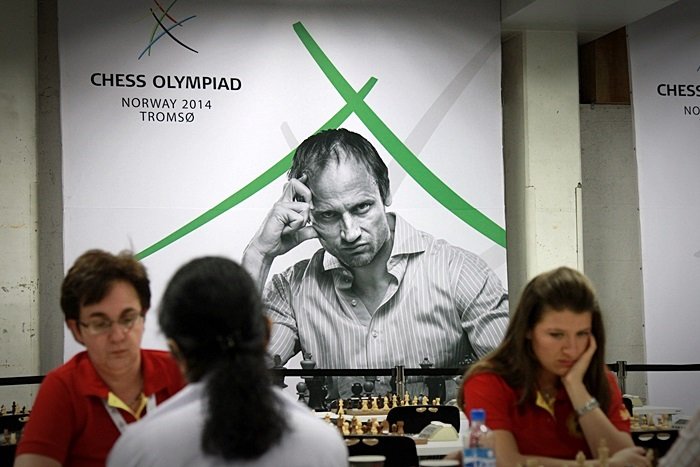 Big Brother is watching you...

But there was plenty of pure chess drama as well. The match of the day in the Open section had to be the inspired resistance given by team Japan against highly rated and perennial Olympiad champions Armenia. The final result was another 4-0 whitewash by a favorite - but at one point the match had the makings of a literal whitewash, with all players with the black pieces under heavy pressure. Most heartbreaking for the underdogs was the missing of a forced mate by FIDE Master Shinya Kojima, who cracked in time pressure after a violent hunt for highly-rated GM Sergei Movsesian's head.

GM Einar Gausel takes a look at a minor tragedy: 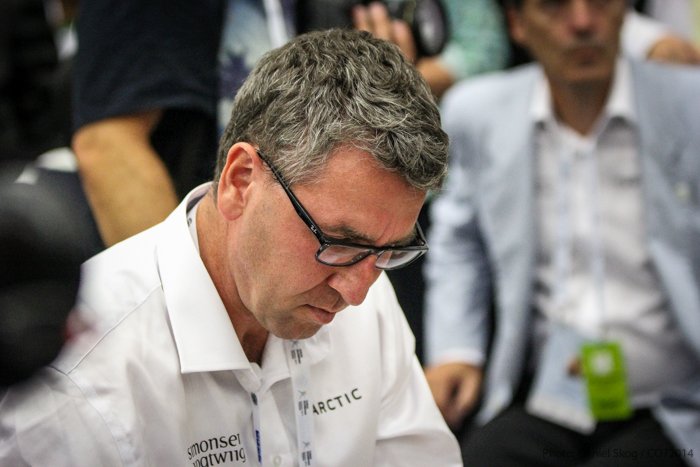 Simen Agdestein won his first game in Tromsø, but overall it was a far from convincing performance from Norway minus Magnus

Norwegian fans could follow the fates of three local teams in both the Open and Women's events. These fans were doubtless a bit puzzled by the fact that the second and reserve teams in the Open section both posted better scores than the first team. Like many of the heavy first-round favorites, Norway rested their top board, anticipating that this would have little impact on the rating gap over their opponents.

But Yemen produced one of the biggest sensations of Saturday's action, taking advantage of a Norway without their world champion. In fact, Norway narrowly escaped being held to a 2-2 draw thanks to GM Jon Ludwig Hammer surviving what appeared to be imminent defeat. The other two Norwegian teams, like very, very many of the favorites, recorded perfect scores.

Four teams did not appear for the first round - Timor Leste, Congo, Mali and Turkmenistan - it is still not confirmed whether these squads may appear late and take part in the event. 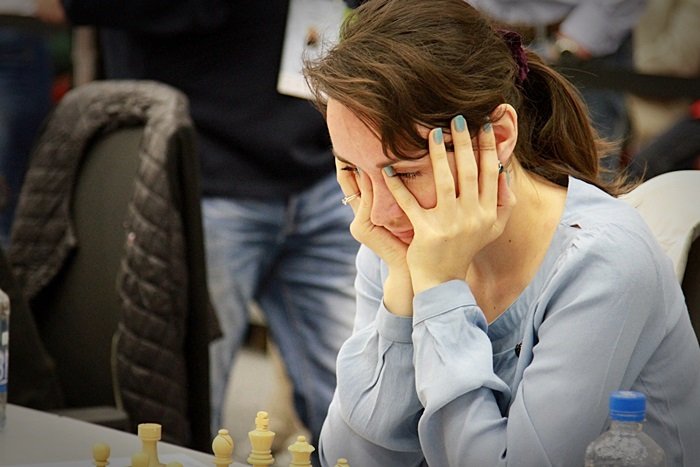 Kateryna Lagno played, and won, her first game under the Russian flag

The Women's event also featured a flood of brutal results. The Portugal team came closest to a sensational upset, with first board WFM Margarida Coimbra leading the charge with a win over WGM Guliskhan Nakhbayeva of Kazakhstan, and WCM Maria Ines Oliveira holding WGM Dinara Saduakassova to a draw, but the favorites emerged victorious after managing to sweep the bottom two boards.

The women's teams from Syria, Turkmenistan and Lebanon lost their matches on forfeit, but organizers were not certain if they still might arrive late for the event.

In the women's section Norway 1 faced off against South Korea. With an average rating advantage of nearly 600 points the home team was hoping to kick things off with a 4-0 shutout. After scoring relatively smooth wins on the bottom boards, top Norwegian, WIM Sheila Barth Sahl (2216) suffered a surprise loss with White at the hands of Chengja Wang (1989).

On board 2 WIM Silje Bjerke downed Hakyung Lim with a neat combination:

Norway's second team avoided slip-ups and secured 4-0 against Madagascar, while Norway 3 were clearly outgunned and lost 4-0 to Argentina.

It's worth mentioning that Norway's second and third teams in the women's section both have 16-year old identical twins representing their country. Monika and Edit Machlik on Norway 2 and Hanna and Marte Kyrkjebø on Norway 3. 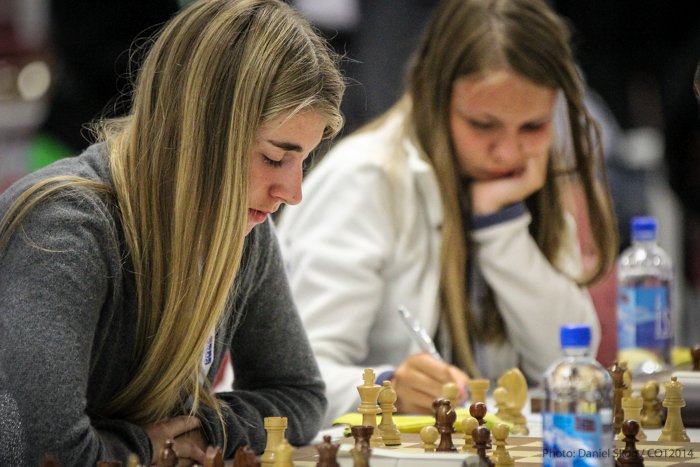 In Sunday's Round 2 the Norway 2 men's team will be in the spotlight - taking on second seeds Ukraine! The top pairings are as follows:

All photographs by Georgios Souleidis and Daniel Skog - more here.