The local teams continue to make the job of including reportage of interest to a Norwegian audience a straightforward task. Less than three hours into the session, it became clear that Norway's second team would be increasing its time in the spotlight, while the main squad for the home nation again gripped viewers by not quite meeting expectations. 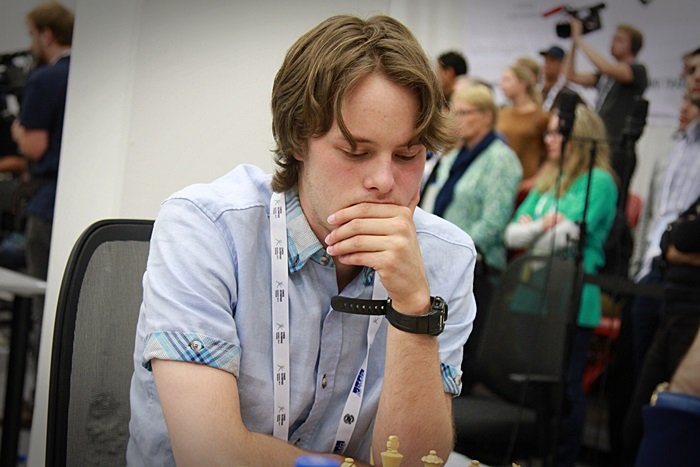 Frode Urkedal pulled off the result of the round by defeating Vassily Ivanchuk | photo: Georgios Souleidis, chess24

Norwegian champion Frode Urkedal, 21, evened up Norway 2's tussle with second ranked Ukraine by defeating the renowned Vassily Ivanchuk, a feat which immediately catapulted the youngster into the media hot seat and the NRK TV studio.


Frode Urkedal later told Tarjei Svensen that he hadn’t been scared of his opponent, commenting:

Ivanchuk just collapsed. He probably overlooked something and his king was quite weak. He probably thought I had to go for his knight. It obviously feels good to beat a strong player such as Ivanchuk.

Not long afterwards, World Champion Magnus Carlsen agreed to split the point against Finnish GM Tomi Nybäck, a result that symbolizes the slow start to the high hopes for Norway's A-team. 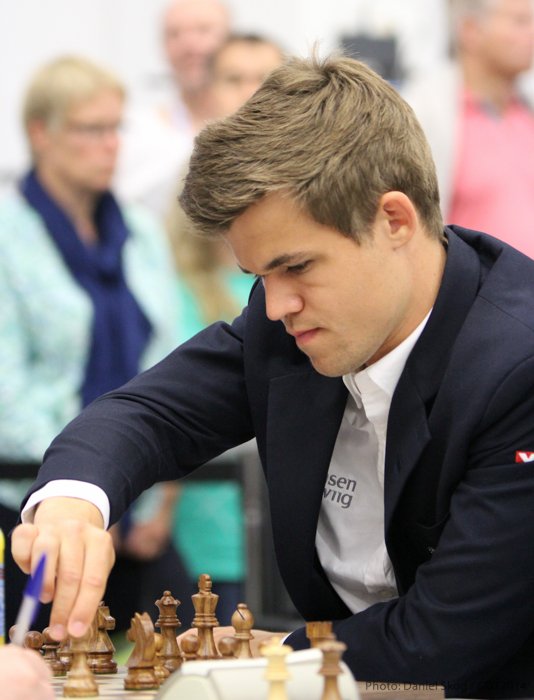 Nybäck's draw carried some extra sting as Carlsen was undoubtedly eager for revenge, having lost to the Finn in the 2008 Olympiad in Dresden. Norway 2 completed their upset by holding Ukraine 2-2, a result that would have pleased the first stringers. Norway 1 had to settle for 2-2 against Finland, a repeat of their 2008 meeting.


Jon Ludvig Hammer sat out the day’s play and made himself useful on the official live broadcast you can watch below:

Many of the top matches were again characterized by healthy rating gaps between top and bottom half, but the atmosphere was noticeably more tense and the duels more closely fought. 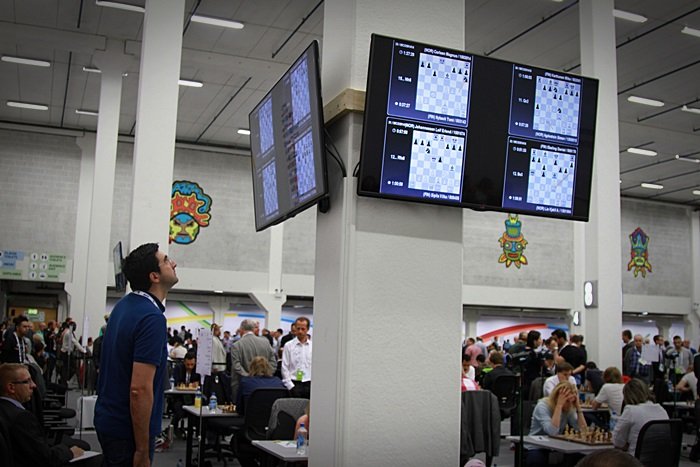 Vladimir Kramnik catches the action on the screens within the playing hall | photo: Georgios Souleidis, chess24

The start of serious business was also evident from the appearance of nearly all of the big guns who rested up on day one. The heavyweight teams rolled out their muscle on top, with a few notable exceptions - England's Michael Adams has not been spotted yet, and the USA's Hikaru Nakamura has made his frustration with travel problems well known via Twitter, and had not yet arrived after getting stuck in London. 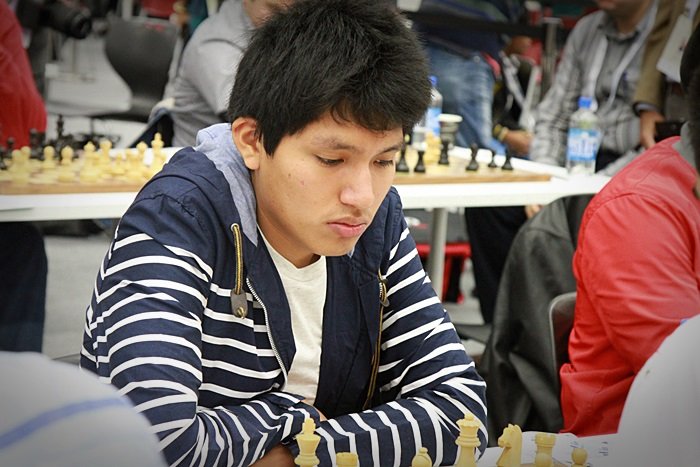 Zero tolerance claimed several casualties today - the Burundi men's team, and most of the Palestinian teams - one of their men played a few moves before giving up, perhaps in sympathy with his forfeited teammates. Another casualty was Alexander Beliavsky, who was forfeited on board one for Slovenia versus Iran for late arrival.

One tragic enforcement of the zero tolerance rule ended in tears when Layola Murara Umuhoza, the 10-year-old first board for the Rwandan women's team, lost without play. One has to question the point of a rule that prevents games being played in an event that has so much importance, especially for smaller nations, because of what is often just minor tardiness.

Chief Arbiter Takis Nikolopoulos felt he had no choice:

I explained this to the Palestinian women. I really hate this rule, but I have to apply it.

Nikolopoulos also said that the team from the Maldives had visa problems but has arrived in Tromsø and will be paired from round 3 tomorrow. That will lead to a bye in the open tournament. He added:

We still don’t know about Turkmenistan, Congo and Mali. They will probably not come because of visa problems.

The top Baltic battle between Alexei Shirov and Sarunas Sulskis was a modern interpretation of a rarely seen romantic classic, a Fried Liver attack. Latvian attacking legend Shirov didn't need to be asked twice, and successfully set off the sacrificial fireworks:

6. ♘xf7 It's hard to convince a computer that White's long-term initiative gives him sufficient compensation for the sacrificed piece, but in practical play White does extremely well. However, this might be the first time two grandmasters decide to discuss this razor-sharp line.

11... ♕h4 12. ♘xc7+ ♔d7 , but to the human eye this just looks like a complete mess. At any rate, this is preferable to the text move, which gives White time to strengthen his attack. 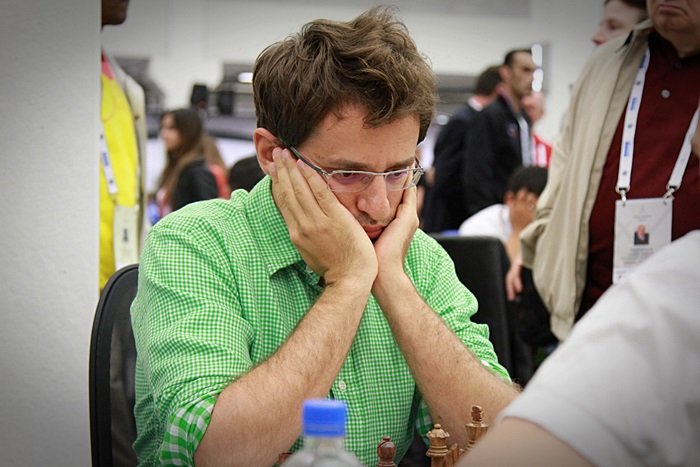 World no. 2 Levon Aronian also failed to win... and in fact dropped to world no. 3 below Fabiano Caruana | photo: Georgios Souleidis, chess24

Veteran Scottish GM Colin McNab held his own with the world elite, splitting the point with Azerbaijan's number one Shakhriyar Mamedyarov. World number two Levon Aronian was held by Australian GM David Smerdon, and Russia's Ian Nepomniachtchi drew with untitled Hamad Al-Tamimi from Qatar. Hungary had a tough time with Venezuela, and only edged out a 2½-1½ victory, with young star Richard Rapport losing to IM Juan Rohl Montes.

On top of this, Judit Polgar's fine combinational finish came after her opponent missed a winning opportunity, so Venezuela was near the sensation of the day.


Most top teams shed board points, but France, Netherlands, Germany, Cuba and Italy of the top 20 ranked teams kept their perfect records.

Among the women the picture was similar - the big favorites continued to gather steam - though there was an interesting contrast in their deployment of heavy artillery. Top ranked China continue to reserve World Champion Yifan Hou for use at a later date, while rivals Russia have put their controversial new acquisition, former Ukrainian GM Kateryna Lagno, into action from round one. 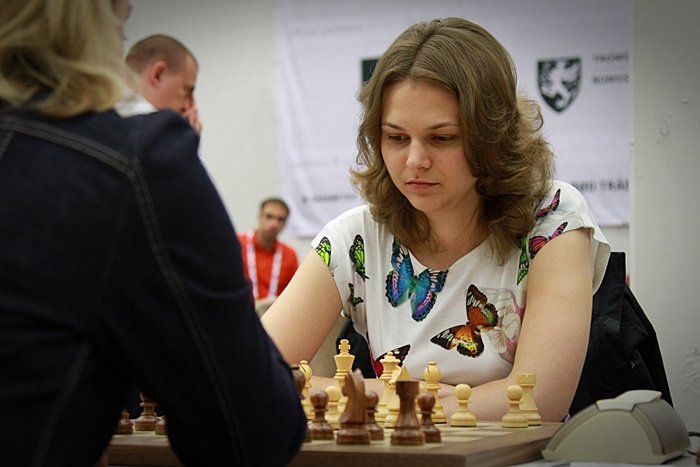 Anna Muzychuk, back playing for her home country, was another star who failed to win | photo: Georgios Souleidis, chess24

Even with the champ still on the sidelines the powerful Chinese team rolled to another 4-0 win, this time over Venezuela, and Russia kept pace by blanking Brazil. Armenia was the only other top ten team that managed to extend a perfect score.

The Egyptian team came close to nicking a match point against 12th seeded Germany, managing a 1½-2½ result despite being massively outgunned on every board. Norway's women impressed with a 4-0 win over Ecuador, in a match that looked to be close on paper.

The round three pairings - which can be found by selecting Round 3 on our Results and Pairings page - reveal the beginning of some heavyweight duels, with match-ups such as Armenia-France, Germany-England and Poland-Cuba promising our first all-2700 clashes. The US might also want to call on Hikaru Nakamura when they take on the Netherlands!