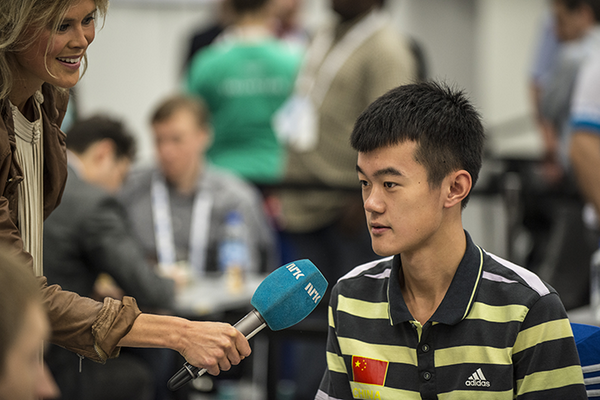 Ding Liren took being interviewed before the final round in his stride | photo: David Llada

The leaders in both divisions turned up looking confident, the Russian women in particular, who were dressed for success, giving off a celebratory air. The Chinese men's team were energetic on the board, and they looked intent on guaranteeing themselves the long coveted gold medal, Liren Ding and Yangyi Yu hitting fast and hard on boards two and three. Ding put China ahead in the third hour, and a 3-1 win and Olympiad gold at last seemed just a matter of time.

And so it proved! China could settle their nerves as Ding Liren's board two win over Grzegorz Gajewski was followed by draws on top and bottom boards. The one remaining game was an absolutely unloseable bishops of opposite colors ending where hot man Yangyi Yu had all the chances and eventually brought home the bacon to give the majestic Chinese men's team a first Olympiad gold.

'Blocker' Yue Wang neutralized every tough first board player he met but Peter Leko - and this was the team's only individual loss of the event. The rest of the team was in magnificent form. Rumor had it that a win by Yu in the last round would put him over the magic 2700 barrier - after 10 rounds he had 8.5/10 and a 2902 performance.

Hungary's hopes for silver looked to be dimming, after drawing both White games - they had uphill battles against the Ukraine on the remaining two boards. 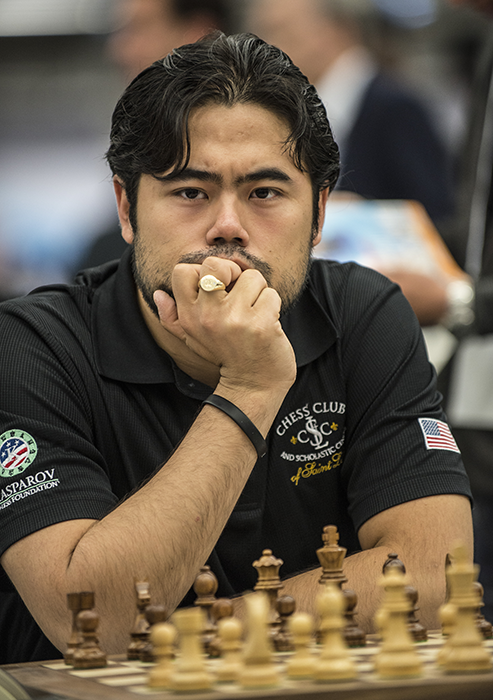 An Olympiad that started badly for Nakamura as he arrived days late ended just as badly - with a defeat to Shakhriyar Mamedyarov | photo: David Llada

All of the matches between medal candidates were open, but the USA had some setbacks - first board Nakamura appeared to be losing against Azerbaijan, and their 'bottom gun', Sam Shankland, could not convert an advantage against Eltaj Safarli on board four - this result means that the US GM had to 'settle' for a final personal score of 9/10.

India supporters noted that the not completely outlandish combination of a China win, draws in the Russia-France and Azerbaijan-USA matches, and an Indian win over Uzbekistan would bring them a medal. The first part quickly looked plausible, and the other matches were predictably close and tense.

Armenia-Czech Republic was a tough last round match with a heavyweight battle on first board. Both teams had hopes for a better result in Tromsø, and although Levon Aronian ended the event with a powerful win over David Navara he was far from satisfied.

Tarjei J. Svensen talked to the world no. 2 afterwards, with Aronian giving a brief response when asked to describe Armenia's performance in Tromsø:

What about your own performance?

Do you have any explanation for the result of the Armenian team?

I think we were missing too many chances. After we played quite badly against France we kind of continued. We started playing strong teams early on, which is normally bad for our team because we are slow starters. We need some time to warm up. If you look at the tournaments that we played, every time we've played somebody strong early on, normally the tournament didn't end so well for us.

I love it here. I was here a year ago and I like being in Norway. In general it fits my needs.

Generally it's a bit too hot in the playing hall. That's one of the problems. I like that every Olympiad is a celebration and Tromsø is a lovely place and I like that we were not playing somewhere outside the city in some boring place. We were in the middle of the town, so that was good.

Tarjei also had a chance to talk to the other side:

How would you sum up the tournament for the Czech team?

David Navara: Unfortunately the tournament did not end very well. We are playing against Armenia, but I lost very quickly so we are disappointed. We were playing quite well in the first seven rounds, but then it became worse and our result depends on the outcome of the final match.

What about your own performance in Tromsø?

Up to a certain moment it was almost perfect, but since then rather bad. If you combine this, it's still a decent result, but nothing special.

How did you like Tromsø, and the organization here?

I like Tromsø. Frankly speaking, some things could be organized better – for example the rest rooms were not perfect – but I liked this Olympiad, as I liked most of the other Olympiads.

Three in a row for Russia! 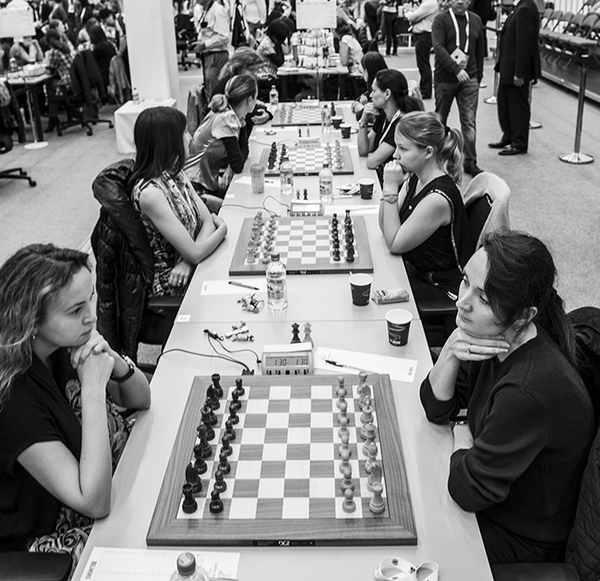 Bulgaria - Russia: a match that nearly got out of hand for the Russians | photo: David Llada

The Russian women did not open as strongly as the Chinese men, and the matches in the women's section were still up for grabs in the third hour of play, with Bulgaria definitely having chances to produce the most dramatic of last round upsets against the leaders.

Alexandra Kosteniuk always looked like delivering a full point for the leaders, but the Bulgarians had good winning chances on the top two boards. GM Valentina Gunina conjured up a winning attack from a not completely convincing position on board two to seize control of the match for Russia, and when the bottom board was drawn the first official team medals of the event were recorded.

The chasing Chinese had their hands full with the third seeds, Ukraine, but gradually took over the initiative on the middle boards in a match that’s still too close to call.

Elsewhere the Germans were locked in a sharp battle with 4th seeds Georgia, but their chances to leap into the medals list looked grim as they had uphill climbs on several boards, and Georgia drew first blood with a win on second board from IM Lela Javakhishvili.

Spain had an outside chance of medals after an impressive tournament, but things quickly went wrong against Armenia, with Maria Kursova winning a miniature against Amalia Aranaz – it could have been over even sooner:

22... ♖ad8 Black is still winning, but she missed the cute knockout combination

Stay tuned for more from the final round of the 2014 Olympiad!