A glimpse into the VIP lounge

Many of the Chess Olympiad’s VIP guests relaxed in the stylish Habitat lounge – just a few steps from where superstar Magnus Carlsen and the top teams were playing. 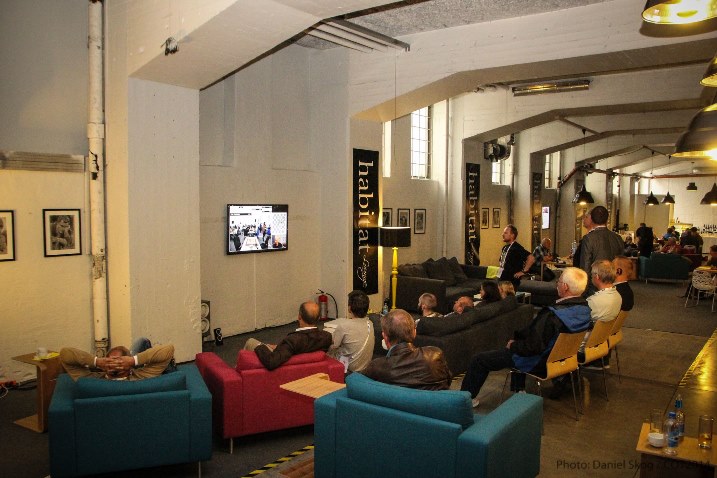 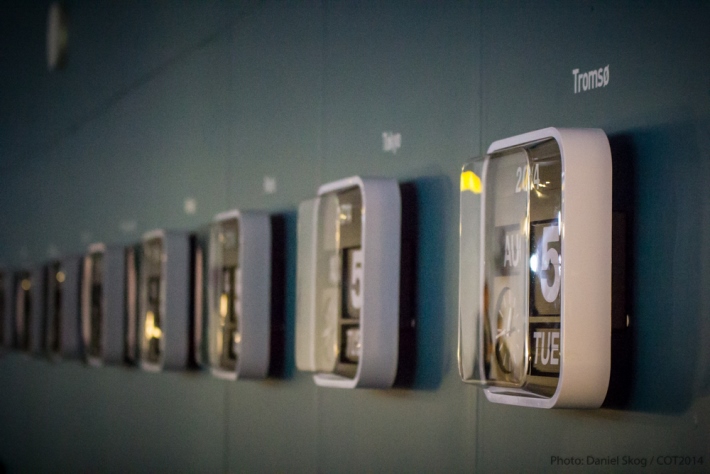 The stylish clock wall allows guests to stay up to date with the time in various parts of the world | photo: Daniel Skog, COT 2014 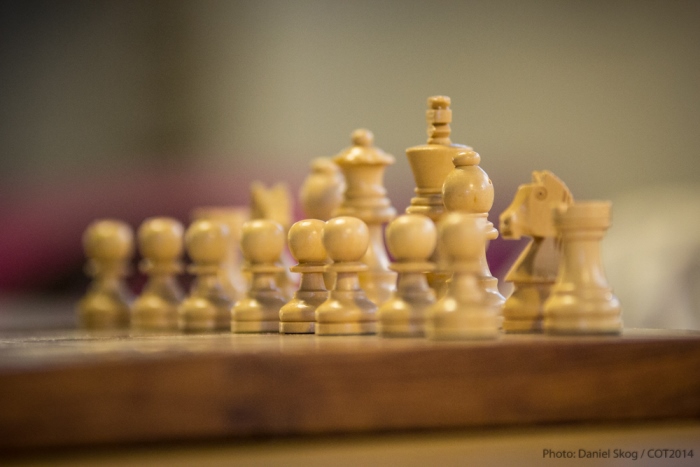 Chess boards are a must and also a decorative element in the lounge | photo: Daniel Skog, COT 2014 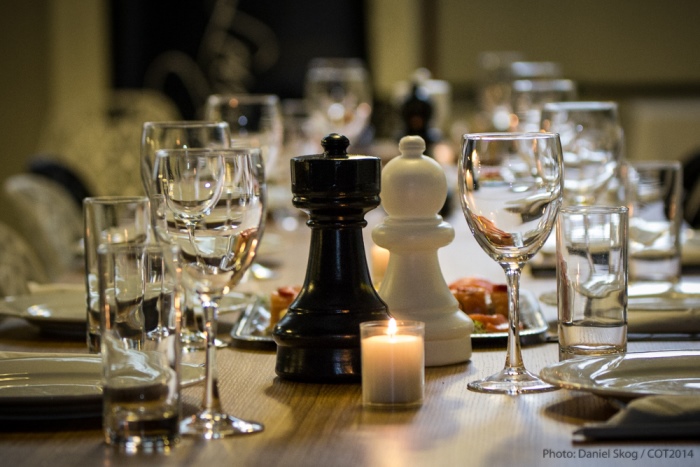 The VIP lounge was specifically designed for Chess Olympiad’s partners and various representatives of the World Chess Federation (FIDE). It features modern colours, deep chairs and sofas, a big screen showing public broadcaster NRK’s live coverage of the event, Wi-Fi, catering by Raketten AS and, to the delight of chess fans, portraits of former world champions hang proudly on the walls. They were drawn by local artist Rolf Klaudiussen, while the lounge’s decor is the work of Tromsø furniture and interior design store Habitat.

We have used the values of the Chess Olympiad – ‘smart, warm and playful’ – as our starting point, with particular focus on the latter.

Kvensjø and her staff were also inspired by the colour spectrum of the Chess Olympiad’s official artist, Chris Reddy, which resulted in sofas and chairs in turquoise, pink and yellow. Habitat Tromsø regarded this as an exciting project, and Kvensjø was satisfied with the result.

I perceive the lounge as calm and evocative – a place where one can relax, play chess and eat. 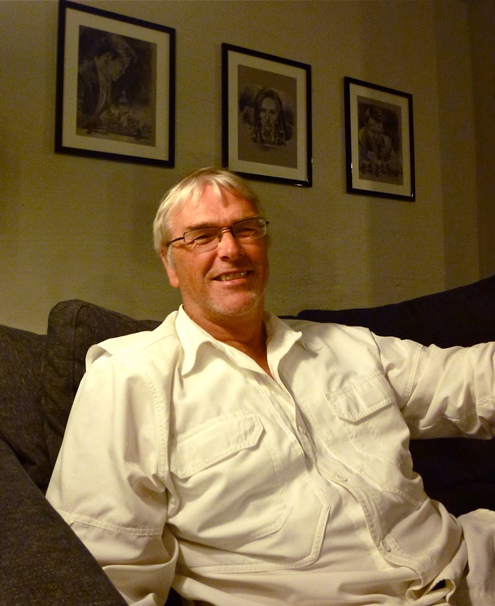 The Habitat Lounge offered comfort and therefore provided a good basis for following chess games that last several hours. As a result, the lounge attracted several regulars within a short space of time. Among those was Hans-Henry Jacobsen, Chief Engineer at the Department of Community Medicine at UiT, The Arctic University of Norway, one of the Chess Olympiad’s main partners. He also happens to be the father of Norway and Tromsø’s youngest player at the Olympiad: 13-year-old Elise Sjøttem Jacobsen.

By following NRK’s live coverage you can keep up-to-date with how the tournament’s going – and naturally I follow Elise’s games especially closely. Many chess stars also drop by the lounge, which adds to the fun.

He has been in the playing arena and followed the games from behind the barriers, but the distance makes it difficult to see the finer details. Consequently, Jacobsen heads for the lounge. He won’t describe the lounge as luxurious, but instead as more convenient than the public viewing areas.

A lot has been done with what I would call a ‘raw building’. The lighting is good, the air is good and the furniture is very comfortable! 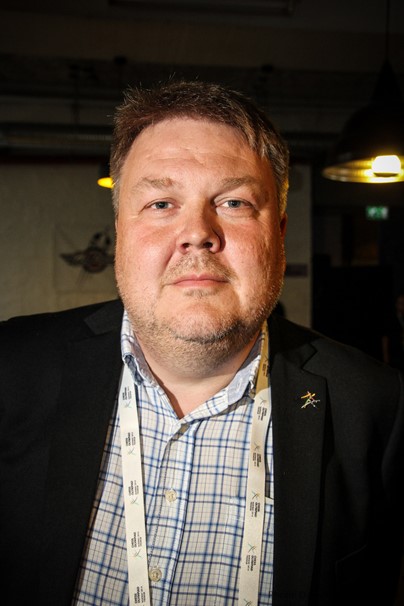 We also chatted with the President of the Icelandic Chess Federation, Gunnar Björnsson, who was sitting comfortably at a table in the café area.

I’m connected to the internet and write news articles about the Icelandic chess players. The lounge is a great place for both working and relaxing. 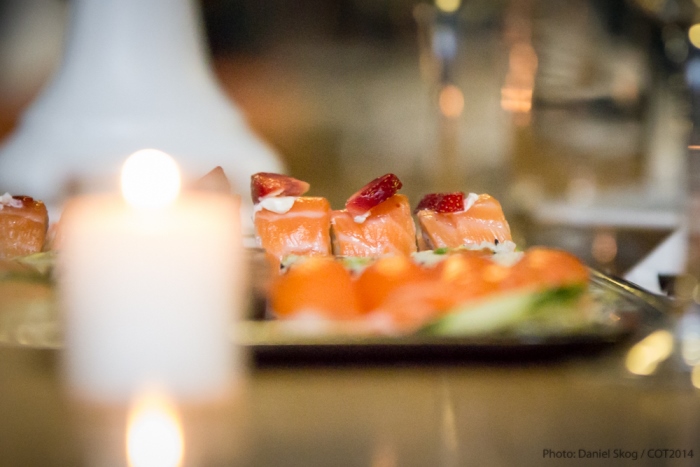 Raketten, which operated the café in the lounge, cooperated with Rå to supply delicious sushi | photo: Daniel Skog, COT 2014

As well as enjoying good food and facilities, Björnsson also mentions that he chatted with the Norwegian Minister of Finance, Siv Jensen, adding: “That was a really nice experience!” 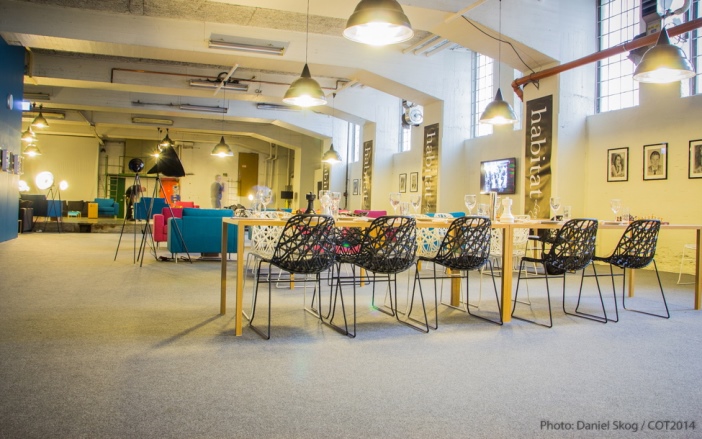 The final touches are added to the Habitat Lounge before the Chess Olympiad got underway | photo: Daniel Skog, COT 2014

Please note that the furniture used in the VIP room will be on sale in Habitat’s store in Storgata after the Olympiad.